Charles Barkley marks Black History Month with a spotlight on local African-American heroes—many of which didn’t make it into the history books or even the newspapers of their time. But their stories are nonetheless inspiring, game-changing and worth knowing.

Here, we take a look at five such figures from Philly who made a significant impact, like Judge Leon Higginbotham Jr. and prolific poet, activist and suffragette Frances Ellen Watkins Harper.

A federal judge appointed by President Jimmy Carter in 1977—the first African American to hold the position—Leon Higginbotham was a jurist, a scholar and an orator. He was a voice for the downtrodden who never shied away from a fight.

Two weeks before his death, he testified before Congress against the impeachment of President Bill Clinton.

When Congressman Bob Barr made reference to “the real America,” Higginbotham said: “My father was a laborer. My mother was a domestic. And I climbed the ladder and I didn’t come to where I am today through some magical vein. So I am willing to match you, any hour, any day, in terms of the perception of the real America.”

Related from The Philadelphia Citizen:
Not To Dis Smokin’ Joe, But…
We need to start honoring African Americans who have contributed to Philadelphia beyond sports and entertainment—like the late federal judge Leon Higginbotham

Even as a young woman, Alexander knew that education was the key to her success. She was the first black woman to graduate from Penn Law, and the first in the nation to get a Ph.D. in economics (and only the second black female Ph.D. recipient in the country)—two of her five eventual degrees.

“I never looked for anybody to hold the door open for me,” Alexander said. “I knew well that the only way I could get that door open was to knock it down: because I knocked all of them down.” He expanded to six health clinics, with over 20 doctors, and Correctional Healthcare Solutions, which sent doctors to 70 prisons in 10 states.

He contributed to various African and African-American causes, both personally and through his Lomax Family Foundation.

In 1994, he bought the plantation in Virginia where his great-grandmother and hundreds of others had been enslaved—what Michael Coard in Philly Mag rightly described as an “expression of real black power.” 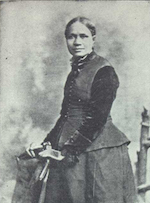 Harper, a writer, abolitionist and suffragette, was born free in Baltimore in 1825, and spent most of her adult life in Philadelphia, where she was active with the Underground Railroad.

She published over 11 books of poetry and fiction, including Iola Leroy, one of the first novels published by an African American.

Her writings primarily focused on social issues: education for women, miscegenation as a crime, temperance and social responsibility.

“The true aim of female education should be, not a development of one or two,” Harper said, “but all the faculties of the human soul, because no perfect womanhood is developed by imperfect culture.” A statue honoring Catto on the southwest apron of City Hall was unveiled by Mayor Jim Kenney in the spring of 2017. It is Philadelphia’s first public statue honoring a solo African American.

Catto was an educator, athlete and major in the Pennsylvania National Guard. He was married to noted teacher and civil rights activist Caroline LeCount.

He recruited African Americans to serve in the military and led a successful protest to integrate Philadelphia’s horse-drawn streetcars.

He was assassinated on Election Day in 1871, as blacks fought for the right to vote.

“All that [the colored man] asks is that there shall be no unmanly quibbles about entrusting to him any position of honor or profit for which his attainments may fit him,” Catto said.

Related from The Philadelphia Citizen:
Octavius V. Catto: A Legacy for the 21st Century
History Making Production’s biopic tells the story of a Philly legend, whose statue was unveiled this morning