We’ll be covering the primary candidates and issues more in the coming weeks—sign up for our newsletter to stay in the loop:

For one, The Citizen is offering three random voters $1,000 each just for casting a ballot, through our Citizen Municipal Election Voter Lottery.

You get to help choose the city’s top prosecutor, and decide who will oversee courtrooms from here to the state Supreme Court, and vote on ballot questions that can affect the future of our state.

If you don’t, politicians won’t care about you: They may not know how you vote, but they can know if you vote—and if we want our electeds to do right by Philly, then we need to let them know we’re paying attention. 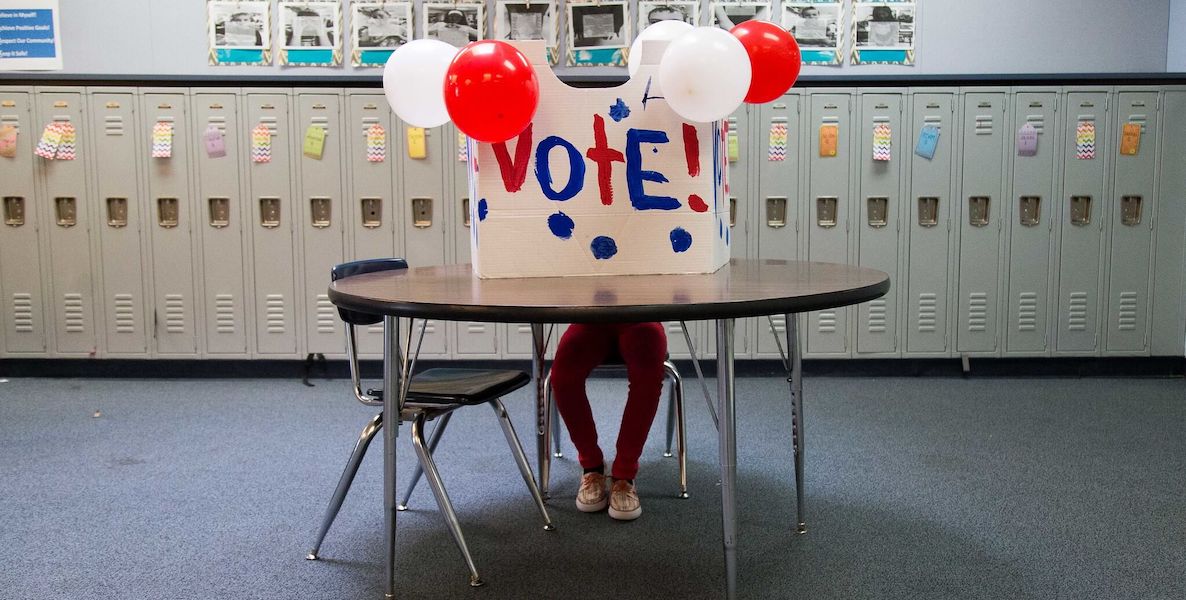 Heading to the polls on May 18? Our voter guide lays out everything you need to know to vote like a champ.

Heading to the polls on May 18? Our voter guide lays out everything you need to know to vote like a champ.

This is a primary election, so you must be registered as either Democrat or Republican in Pennsylvania to be able to select the candidates who will face off in the November general election on November 2. For Philadelphians registered outside of those parties, such as Independents, you will have a chance to vote on five ballot questions—including an amendment to the Home Rule Charter (more on that below).

With this voter guide, we aim to make that process easier by laying out everything that will be on your ballot below.

DISTRICT ATTORNEY (VOTE FOR ONE)

As chief prosecutor for the City, the district attorney determines what crimes will be prosecuted, and the severity of the charges. You may ask, “Don’t judges have the final say in sentencing?” Sure, if the case goes to trial. But the vast majority of cases are actually decided by plea bargain, meaning the D.A.’s office has an incredible amount of power and discretion.

Recent coverage about the D.A. candidates

CITY CONTROLLER (VOTE FOR ONE)

The city controller is the top fiscal watchdog of the city, auditing expenditures of the city government. This race tends to take a back seat to the more high-profile district attorney contest, but it’s incredibly important.

JUSTICE OF THE SUPREME COURT (VOTE FOR ONE)

The Supreme Court is the highest court in the Commonwealth and the oldest appellate court in the nation. There is one vacancy on this court, which is known as the “court of last resort” and can assume jurisdiction over any case in the PA court system. Seven justices serve on the Court and their job is to make the final judgment in interpreting PA’s laws and Constitution.

JUDGE OF THE SUPERIOR COURT (VOTE FOR ONE)

There is one vacancy open in 2021 on the Superior Court of Pennsylvania, which serves as the appeals court for most citizens and businesses. It is one of the busiest intermediate appellate courts in the country, receiving hundreds of thousands of filings per year and deciding more than 8,000 individual cases.

JUDGE OF THE COMMONWEALTH COURT (VOTE FOR NO MORE THAN TWO)

There are two vacancies on the Commonwealth Court, which hears civil cases involving state or local government. It also hears appeals and sometimes sits as a trial court in certain cases brought by or against the Commonwealth, such as a constitutional challenge to a state law or a tax dispute. Pennsylvania has the only court like it in the country.

There are eight vacancies on this court, which is known as a “general trial jurisdiction court,” because the Courts of Common Pleas are organized into 60 judicial districts. This court is responsible for hearing criminal and civil cases, including those involving families and children; hearing appeals from the minor courts and appeals not exclusively assigned to another court; and holding civil, criminal and jury trials. Sample court cases include divorce, property division, alimony, custody and child support, paternity and protection orders.

Read more about the candidates running for judge of the Court of Common Pleas in our comprehensive PA judicial election guide.

JUDGE OF THE MUNICIPAL COURT (VOTE FOR NO MORE THAN THREE)

There are three vacancies on the Philadelphia Municipal Court, which is responsible for determining whether serious criminal cases go to the Court of Common Pleas; preliminary arraignments and hearings; and setting and accepting bail, except in murder or voluntary manslaughter cases. Some sample court cases include traffic tickets, landlord-tenant disputes, underage drinking.

Read more about the candidates running for a seat on the Philadelphia Municipal Court in our comprehensive PA judicial election guide.

JUDGE AND INSPECTOR OF ELECTION (VOTE FOR ONE)

These folks are your neighbors, and must live in your voting division (e.g. 2-06 means Ward 2, Division 6). Two inspectors in each division make sure the polling machines are up and running on time, and one judge of election ensures everything is setup in compliance with state and local laws. There are 1,686 divisions in the city, so we suggest checking out this PDF page from the City Commissioners Office to find all the candidates running in your district.

Philadelphia voters will weigh in on five ballot questions in the 2021 primary. For a full breakdown of what these measures mean, go to the Committee of Seventy’s explainer here.

Ballot Language: Shall the Pennsylvania Constitution be amended to change existing law and increase the power of the General Assembly to unilaterally terminate or extend a disaster emergency declaration—and the powers of Commonwealth agencies to address the disaster regardless of its severity pursuant to that declaration—through passing a concurrent resolution by simple majority, thereby removing the existing check and balance of presenting a resolution to the Governor for approval or disapproval?

Plain Language: This constitutional amendment, according to the Office of the Attorney General, would allow the General Assembly to terminate or extend a disaster emergency declaration or a portion of such declaration without needing the governor’s approval. The amendment came about in response to Gov. Wolf’s emergency declarations during the coronavirus epidemic, but the language has been a source of continuing controversy

A “yes” vote supports this constitutional amendment to allow the Pennsylvania General Assembly to pass a resolution, which the governor cannot veto, by a simple majority to extend or terminate the governor’s emergency declaration.

A”no” vote opposes this constitutional amendment, meaning that the governor would continue to be allowed to veto resolutions terminating emergency declarations and a two-thirds legislative vote would be required to override the veto.

Plain Language: According to the Office of the Attorney General, this amendment would:

A “yes” vote supports this constitutional amendment to limit the governor’s emergency declaration to 21 days unless the legislature votes on a concurrent resolution to extend the order and provide that the state legislature shall pass laws related to how disaster emergencies must be managed.

A “no” vote opposes this constitutional amendment, meaning the governor would continue to be allowed to issue emergency declarations without a legislative vote after 21 days.

Question 3: Prohibition Against Denial or Abridgement of Equality of Rights Because of Race or Ethnicity

Ballot Language: Shall the Pennsylvania Constitution be amended by adding a new section providing that equality of rights under the law shall not be denied or abridged because of an individual’s race or ethnicity?

Plain language: According to the Office of the Attorney General, if passed, this amendment would make it illegal to restrict or deny an individual’s equal rights under Pennsylvania law because of race or ethnicity.

A “yes” vote supports adding language to the state constitution that prohibits the denial or curtailing of rights on account of an individual’s race or ethnicity.

A “no” vote opposes adding language to the state constitution that prohibits the denial or curtailing of rights on account of an individual’s race or ethnicity.

Ballot Language: Do you favor expanding the use of the indebtedness authorized under the referendum for loans to volunteer fire companies, volunteer ambulance services and volunteer rescue squads under 35 PA.C.S. §7378.1 (related to referendum for additional indebtedness) to include loans to municipal fire departments or companies that provide services through paid personnel and emergency medical services companies for the purpose of establishing and modernizing facilities to house apparatus equipment, ambulances and rescue vehicles, and for purchasing apparatus equipment, ambulances and rescue vehicles, protective and communications equipment and any other accessory equipment necessary for the proper performance of the duties of the fire companies and emergency medical services companies?

Plain Language: The purpose of the ballot question, according to the Attorney General, is to determine whether Pennsylvania voters authorize making municipal fire departments or companies with paid personnel and emergency medical services companies eligible to apply for loans from an already existing state loan program. This referendum does not authorize incurring any additional debt to fund the loan program; it only expands the class of eligible loan applicants.

A “yes” vote would allow fire departments to apply for loans from the state program.

A “no” vote would prevent fire departments from applying for loans from the state program.

Ballot Language: Shall The Philadelphia Home Rule Charter be amended to provide for an expanded Board of License Inspection Review that can hear and decide cases in three-member panels?

Plain Language: The City’s Home Rule Charter is like the City’s constitution; it sets up the rules for City government. If you vote “Yes” on this ballot question, it means you want to change the City’s Charter so that the City’s Board of License and Inspection Review is expanded to have nine members and is allowed to hear and decide cases in groups of three members at a time.

A “no” vote would keep the system as it is, with the full Board consisting of six members, the majority of whom must participate in order to hear a case.