Ways to reform our election system

For all our election reform ideas, go here 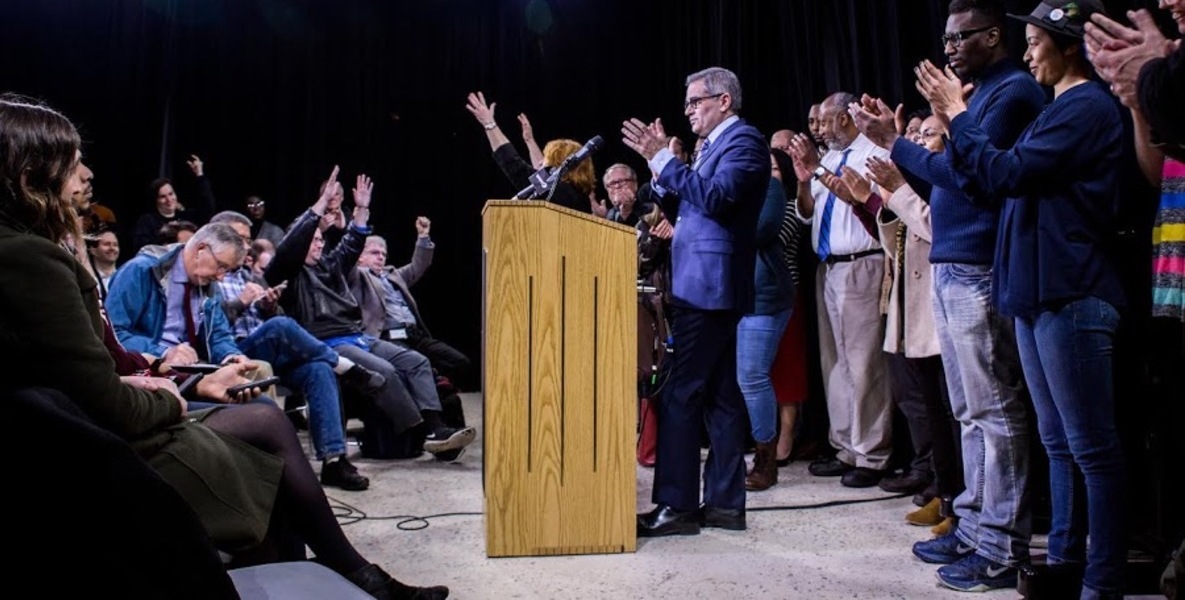 Ideas We Should Steal: Democracy Vouchers

In Seattle, residents get cash vouchers to support political candidates. It could even the playing field—and bring more people out to the polls

Ideas We Should Steal: Democracy Vouchers

In Seattle, residents get cash vouchers to support political candidates. It could even the playing field—and bring more people out to the polls

A month before the District Attorney’s primary in May, the 7-way Democratic race was like most others in Philly’s recent history: Democrats more or less on the same spectrum of ideas, with more or less the same name-recognition, in a campaign that held little interest for those in the city (note the 17 percent turnout), much less outside. Then, George Soros jumped into the fray, with his $1.45 million contribution to Larry Krasner on April 28. Suddenly, everything changed. Not only did Krasner outspend all his competitors—even the independently wealthy Michael Untermyer; now Philly’s DA race was a national cause celebre, garnering attention even from the likes of John Legend.

Would Krasner have pulled out a win without Soros’s money? Possibly. He was the people’s champ. But he was also a willing participant in a system that often bends to the desires of billionaires; even he, the candidate who vowed to fight systems of oppression in this city, found himself beholden to an oppressive electoral system in order to survive.

This could be the future of all elections, local and otherwise, unless we find a way to let regular people take back their democracy. That’s the idea behind Democracy Vouchers, a Seattle program that gives every voter in that city $100 to donate to a local political campaign.

Starting this year—when there is a City Council and District Attorney’s race—eligible Seattle voters received four $25 vouchers in the mail. Up until November, they can designate a candidate to receive their donation, and then send the vouchers either directly to the campaign or back to the Seattle Ethics and Elections Commission (SEEC), which will give the money to the candidate on their behalf. The vouchers are funded through a new property tax approved by the voters in a 2015 referendum.

Voters would surely be more likely to come out for a candidate they commit a few bucks to than one they simply see plastered across a billboard. While there isn’t data to show how public financing affects voter turnout in cities, studies have shown that states that have or have had publicly funded campaign laws on the books see higher voter turnout on average.

Seattleites, so far, have cashed in more than $200,000 in Democracy Vouchers in total. That is likely to increase in coming months, as Seattle is holding its municipal primaries in early August, followed by the general election in November.

Democracy Vouchers is a direct response to 2010’s Citizens United ruling, which allows corporations, individuals and unions to circumvent campaign funding limits by committing unlimited amounts of cash to chosen candidates through political action committees. A grassroots effort created “Honest Elections Seattle,” which also capped donations from wealthy donors. In November, 2015—just a few years after it was first proposed—the ballot measure passed by an almost 2-1 margin, with 63 percent of the vote. That gave the SEEC just 13 months to implement the program and send out 500,000 vouchers on January 3 of this year.

Participation in Seattle’s voucher program is voluntary for office seekers. To be eligible, they must agree to participate in three debates, to limit contributions and spending, and to refuse donations from anyone with $250,000 in city contracts. During the primary, city council candidates can receive $150,000 in Democracy Voucher funding; during the general they can pull in up to $300,000. This keeps the spending in check, so the city does not run out of public election funds.

“If all of the 13 candidates who have pledged to participate in the program reach their spending caps using only vouchers, we will still not spend the $6 million collected to date,” says Wayne Barnett, Executive Director of SEEC.

Nearly 2,000 more Seattleites have contributed to campaigns this year than at the same point in the 2015 municipal elections, Barnett says in large part to Democracy Vouchers. The program provides citizens who otherwise feel painfully removed from the inner workings of political campaigns a way to have some actual skin in the game, without setting them back financially.

There’s also a delicious side effect for anyone trying to accurately predict election outcomes: The voucher system could heartily supplement, or even replace, highly-inaccurate municipal polling systems. Campaigns usually use outside pollsters to do their polling, which does not create the most impartial results—that’s why you often see campaigns that have wildly overestimated their potential for success. For example, a poll commissioned by Joe Khan’s District Attorney campaign shortly before the primary had the candidate tied for the lead with Krasner, who would go on to dominate Khan by about 18 percentage points.

Big donors can also obscure whom we think public sentiment is behind because we have a habit of conflating donations with popular support. For an example, let’s turn to the 2016 presidential election. Marco Rubio, a comparative moderate and media darling, destroyed then-candidate Donald Trump in outside donations, and he was bounced out of the race far earlier than expected. Clinton, similarly, outraised Trump by more than $100 million. But Trump dominated with small donations—which are fast becoming the most accurate way to judge popular support. If Philly were to adopt the Seattle’s voucher system, and publish monthly reports on voucher application, we could all more accurately judge who is in the lead.

Nearly 2,000 more Seattleites have contributed to campaigns this year than at the same point in the 2015 municipal elections, in large part to Democracy Vouchers. The program provides citizens who otherwise feel painfully removed from the inner workings of political campaigns a way to have some actual skin in the game, without setting them back financially.

Seattle became the first city in the country to offer every citizen a chance to buy into a campaign using public funds. But it is not likely to be the last: Washington state as a whole is considering a similar program, and South Dakota voters in November approved a ballot measure that would, among other reforms, create $50 Democracy Credits for every voter. That measure, however, has hit a roadblock: The state legislature this year passed a law blocking its implementation, claiming the credits were unconstitutional. Its fate now is up in the air.

Seattle, too, may stumble as it runs its 10-year-experiment. For a city of 700,000 people, even the pilot program may be underfunded. The voter-approved property tax is estimated to raise $3 million a year for 10 years (which would amount to about $9 a year additional levy on a $450,000 property). That is not actually a whole lot of money to distribute per election cycle, if it continues to gain in popularity. Different races have different voucher limits, ranging from $150,000 for local council races to $300,000 for citywide seats. And Seattle often has numerous candidates for each post. A mayoral election this year, for example, has 20 candidates. It is not part of the voucher program; voters won’t get to use their donations for mayor until 2021. But another race like it would drain the coffers much faster than the tax rolls could fill it.

In Philadelphia, a change to campaign financing would require an act by City Council, which would also need to find a way to fund the program for our much larger city. (Maybe by legalizing and taxing marijuana?) That is always a battle, especially for entrenched politicians not inclined towards making a change to the system that keeps them in office. But the effects could be huge. The efforts to include more citizens in the funding are always paired with transparency and other reforms, which themselves would be a benefit to our elections system.

And while voter turnout in Seattle may be regularly over 50 percent, here the numbers are far lower. That is partly because voters feel disconnected from the process. But they would surely be more likely to come out for a candidate they commit a few bucks to than one they simply see plastered across a billboard. While there isn’t data to show how public financing affects voter turnout in cities, studies have shown that states that have or have had publicly-funded campaign laws on the books see higher voter turnout on average.

Campaign vouchers here or anywhere are not the complete overhaul of our voting system that we could get with say, mandatory voting protocols or making all election days a holiday. But they could put us on the track toward a more politically involved future that would bring democracy back to where it belongs: The people.