Home » Events » WATCH: Run for Something

The ultimate guide to voting in the Pennsylvania Primary on Tuesday, May 17, 2022.

If a “I voted” sticker just doesn’t do it for you, here are 18 more reasons to hit your polling place – or put that envelope in the mailbox — on May 17.

At the Citizen's next event

From the Frontlines in Ukraine with Ali Velshi, a discussion with the MSNBC host and Citizen board member about his reporting from the war zone, Tuesday, May 31, 8:30 to 10am at the Fitler Club, 2400 Market Street. 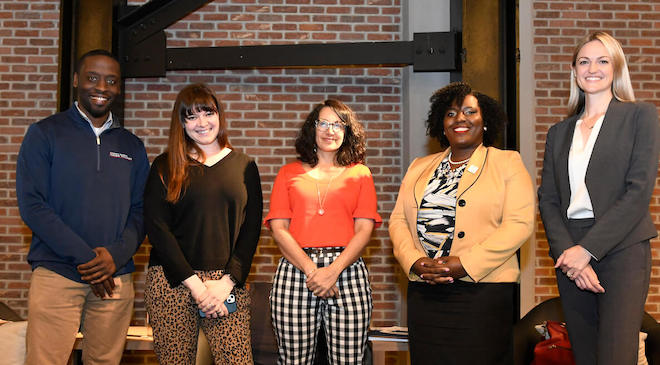 Campaign signs fill windows. Ads fill broadcast spaces. Our next election will be here before we know it — obviously, you’ll be voting on May 17.

Question is, will the kind of people you want in office be on the ballot?

The Philadelphia Citizen raised this question on Monday, May 9 when we brought together Amanda Litman, founder of Run For Something (and author of the book), Philadelphia City Councilmember At-Large Isaiah Thomas, PA State. Rep. Joanna McClinton and Scranton Mayor Paige Cognetti, four compelling agents of political change, to discuss their journeys and how to inspire, build, support — and, if so moved, become — a new generation of elected leaders.

About 60 of us gathered in the Fitler Club ballroom for a totally frank, completely refreshing discussion about: Running For Something. Roxanne Patel Shepelavy, executive editor and co-executive director of The Philadelphia Citizen, moderated.

The Citizen partnered on the event with Philadelphia 3.0, New Leaders Council Philadelphia, Young Involved Philadelphia and Fitler Club. East Passyunk local bookseller A Novel Idea was on hand to sell copies of Run For Something.

One memorable quote from the event (with more on our Twitter) and video and photos below.

“I tell young people who want to run: ‘You can do this. You need to do this. You have to do this. We will help you.’ They don’t see themselves in leadership. There are not a lot of role models,” said Litman.

“At the end of the day, a lot of us in Philadelphia know what it feels like to be told: Wait your turn. But we need to create a path for the next generation. That’s our job as young elected officials to not just inspire but to provide the resources and the access. Joanna McClinton supported me when I ran. I try to pass that same thing down,” said Thomas.

“Local government is how you build a party. It’s how you get better members of U.S. Congress. It comes precinct by precinct, by door-knocking, by electing city council members and mayors and probate judges,” said Litman.

“I start out by listening to others’ concerns. It’s really reminiscent for me of my work as a public defender and as a youth leader at youth ministry at church. I listen to issues, I make connections with people, and I make every effort to see how we can get closest to the solution,” said McClinton, the first Black woman to serve as House Democratic leader, about how she leads her fellow representatives.

“​​I can lead by example all I want, but I’ve got to bring people along with me,” said Cognetti.

MORE ON POLITICAL ACTION FROM THE CITIZEN

Your City Defined: What Is Councilmanic Prerogative?