A spotlight on five African-American heroes from Philadelphia, such as Cecil B. Moore, Henry Ossawa Tanner and Jessie Redmon Fauset

A spotlight on five African-American heroes from Philadelphia, such as Cecil B. Moore, Henry Ossawa Tanner and Jessie Redmon Fauset

NBA legend Charles Barkley marks Black History Month with a spotlight on Philadelphia’s African-American heroes—many of which didn’t make it into the history books or even the newspapers of their time. But their stories are nonetheless inspiring, game-changing and worth knowing.

Here, we take a look at five such figures from Philly who made a significant impact, like outspoken and scrappy civil rights activist Cecil B. Moore and renowned painter Henry Ossawa Tanner.

You can check out all the other profiles here, here, and here. “After nine years in the Marine Corps, I don’t intend to take another order from any son of a bitch that walks,” he once said. And that he didn’t.

Most famously, he led a group of protesters at Girard College in 1965 to push for the school’s integration.

In May of 1963, Moore organized a several weeklong picket line at the Municipal Services Building to fight for desegregated trade unions.

Soon after, he picketed against the Trailways Bus Terminal, demanding that they hire black workers.

Meanwhile, he advocated for more civic engagement from African Americans and held his own voter-registration drives. Though sometimes controversial for his unrelenting style, Moore was a force for change in civil society. Known as “the midwife” of the Harlem Renaissance, Fauset was an acclaimed writer/editor who used her pen and others’—including Langston Hughes’—to further the African-American voice in public discourse.

She was the only African American in her graduating class at Philadelphia High School for Girls.

Years later, she was an editor for The Crisis, the NAACP magazine started by W.E.B. Dubois.

The most published novelist of the Harlem Renaissance, she wrote four novels, each with a focus on black culture and the challenges that confronted it.

William Stanley Braithwaite hailed her as “the potential Jane Austen of Negro Literature,” and Deborah E. Mcdowell saw her as a “black woman [who dared] to write—even timidly so—about women taking charge of their own lives and declaring themselves independent of social conventions.” An inspiration to Frederick Douglass and Martin Luther King Jr., Allen was a religious man—and wholly devoted to the African American cause.

He was born into slavery and bought his own freedom at the age of 23.

After hearing a Methodist preacher speak out against slavery, Allen became a Methodist himself.

In 1794, he and 10 others founded the Bethel Church, a black Methodist church that stood on a plot of land, in what is now on the edge of Society Hill, that Allen purchased with his meager earnings as a chimney sweep and shoemaker.

Allen and his wife used the church for prayer, but also as a stop along the Underground Railroad for hiding runaway slaves.

It became more vast and remarkable once it turned into a subsidiary of the African Methodist Episcopal Church (A.M.E.)—the first national black church in the United States.

Allen was an early face of the civil-rights movement, and Richard Newman went so far as to call Allen “[The] Black Founding Father.” Henry Ossawa Tanner was the first African-American artist to gain recognition on the world stage.

Noted for his depiction of landscapes and biblical themes, Tanner’s work caught the eye of many, including Thomas Eakins, another famous 19th-century painter from Philadelphia.

Oddly, Tanner thanked his poor health early in his life for giving him the time to hone his artistic skills.

He trained at the renowned Pennsylvania Academy of the Fine Arts and Robert Vaux School before moving to Paris and settling there.

“Nicodemus Visiting Jesus” is believed to be his most famous work. 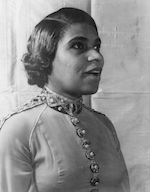 Despite the resistance Anderson faced in venues across the country, she became one of the city’s fiercest and most successful performers, as well as a deliberate (and inadvertent) Civil Rights hero.

She played with the New York Philharmonic in 1929, but is best known for her Easter Sunday 1939 concert on the steps of the Lincoln Memorial before 75,000 people, with millions more listening live on NPR.

That show happened because the Daughters of the American Revolution in Philadelphia refused to allow Anderson to perform at Constitution Hall, prompting Eleanor Roosevelt to resign her DAR membership and arrange the open-air show for Anderson in D.C.

Anderson toured extensively throughout Europe, where her remarkable talent was appreciated by none other than Arturo Toscanini, who told her, “Yours is a voice such as one hears in 100 years.”

Back home, it wasn’t until 1955 that she became the first African American to sing at the Metropolitan Opera.

She fought for more than just her own chance at fame: She was a major part of the civil rights movement, performing in D.C. again for the March on Washington in 1963.

“I could not run away from the situation” Anderson said. “I had become, whether I liked it or not, a symbol, representing my people. I had to appear.”