Do you want to see change in Philly?

We hope to do that in our Good Citizenship Toolkit, which includes a host of ways to get involved in Philadelphia—whether you want to contact your City Councilmember to tell them what issues are most important to you, get those experiencing homelessness the goods they need, or simply go out to dinner somewhere where you know your money is going toward a greater good.

Get your poll results here

Newly-formed Nonprofit A Greater Philadelphia conducted a poll in February of 800 Philly Democrats to focus their efforts toward higher expectations, more effective leadership, and better governance on the issues that matter most.

The three most important factors driving poverty in Philadelphia:

Regardless of the job they think city council is doing, democratic voters are overwhelmingly in support of term limits, with 73% supporting term limits overall.

More than two-thirds of democratic voters are more concerned about crime. Here are their thoughts on how concerned they were that they would be a crime victim over the last six months: 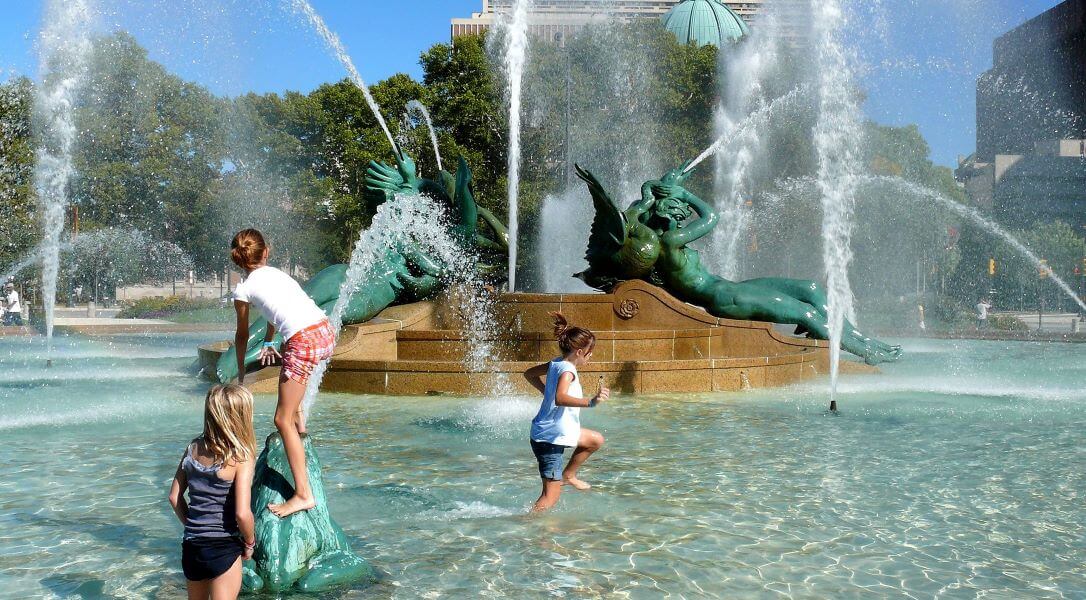 A new poll by civic nonprofit A Greater Philadelphia shows that despite the noise, it’s public safety and good government that matter most to Philadelphians

A new poll by civic nonprofit A Greater Philadelphia shows that despite the noise, it’s public safety and good government that matter most to Philadelphians

That’s according to a poll in February by civic 501c4 nonprofit A Greater Philadelphia of 800 Philly Democrats, 57 percent of whom said “police and public safety” were the top issues the City should focus on to most help them and their families. Another 27 percent, said “safe and affordable housing” were top concerns, followed by 21 percent who said better schools would most help their families.

The survey was conducted by nationally-recognized pollsters McLaughlin & Associates and Frederick Polls February 14-17. Gleason says they concentrated on Democrats because they are the dominant majority among city voters.

The Citizen is partnering with A Greater Philadelphia to publish the results of this and future polls, starting with three separate data analyses.

Poll results and analysis from A Greater Philadelphia

Q. In the past 6 months, are you more or less worried about being the victim of a crime? Non-whites are more worried, with Black and Hispanic residents demonstrating the most intense concern

Women are more worried than men.

Northeast residents are more worried, followed closely by those in North Philly.

Fear is the new normal in Philadelphia. It is evident even among those who generally approve of city leaders’ performance.

People with children living at home are the most afraid.

The longer people have lived in the city, the more worried they are.

In light of the broad degree of concern about crime, public safety is by far the issue residents want city leaders focused on.

Q. Which issue should the City focus on most to help you and your family?

Residents see poverty as the No. 1 reason gun violence has increased, followed closely by “reduced enforcement and prosecution of gangs and gun traffickers.”

Q. Which is the biggest reason that gun violence has increased since 2019?

Programs to get guns off the streets and community investments are the favored strategies for preventing gun violence.

Q. Which is the most effective tool to prevent gun violence?

Overall, the majority of respondents say the city is on the wrong track.

Q. Would you say things in Philadelphia are headed in the right direction?

Related from The Citizen
Is Philly turning into a city of wusses?
By Larry Platt

THE MOST IMPORTANT ISSUES

As City begins budget process, Democratic voters name safety and affordable housing as top priorities for their family, and a lack of quality schools and jobs as the primary factors causing poverty

Q. Which issue(s) should the City focus on most and second most to help you and your family?

Q. What is the single most important factor causing the high rate of poverty [in Philadelphia]?

A majority of Black and Hispanic Democrats says lowering business and/or income taxes will create jobs and reduce poverty. White and Asian respondents are more likely to see tax reductions as tax breaks for the rich.

Even among those who approve of City Council’s performance, 74 percent want to implement term limits

Q. Do you favor or oppose establishing term limits for all members of Philadelphia City Council, allowing them to serve a maximum of four terms (16 years)? Residents are unified in supporting term limits, regardless of whether they view City as headed in right direction or on wrong track

Support for term limit is consistent across racial and geographic categories, as well as among those who have lived in the city shorter or longer 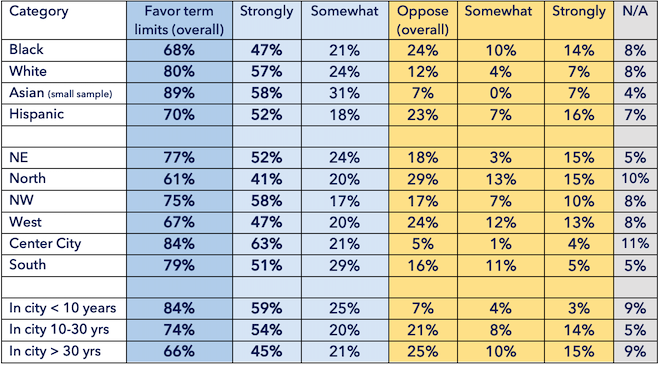