We hope to do that in our Good Citizenship Toolkit, which includes a host of ways to get involved in Philadelphia — whether you want to contact your City Councilmember to voice your concerns about rising crime, get those experiencing homelessness the goods they need, or simply go out to dinner somewhere where you know your money is going toward a greater good. 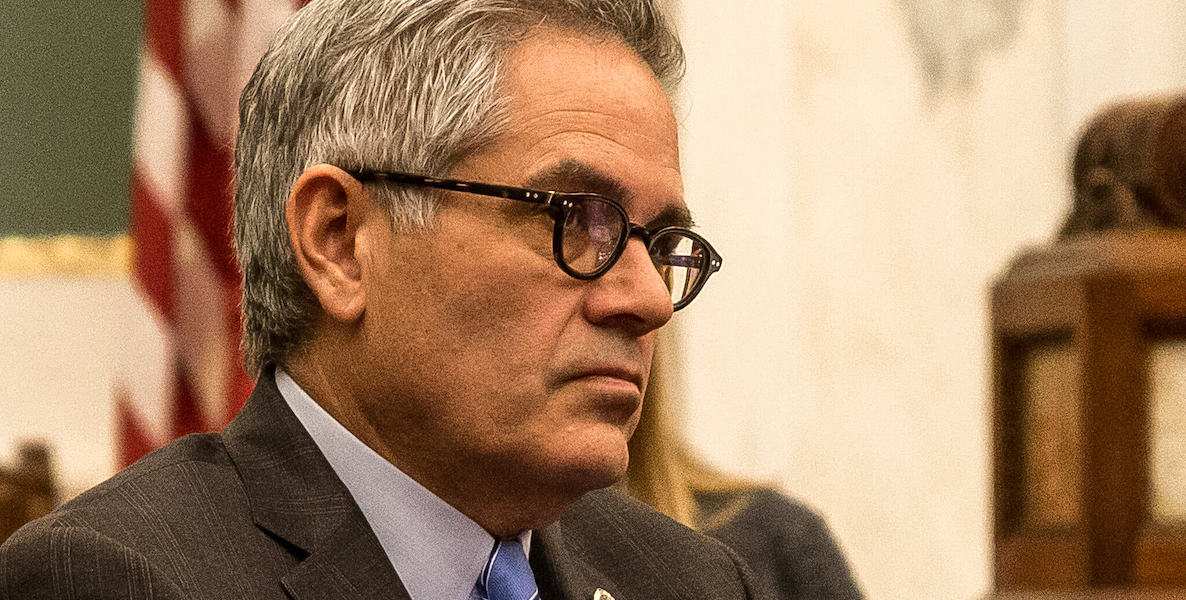 First, let’s acknowledge the tragedy of Larry Krasner. If you, like me, have looked open-mindedly at the evidence and concluded that, indeed, our commonwealth’s parole and probation system is in desperate need of reform, that cash bail effectively criminalizes poverty, and that for too long corrupt cops have largely gone unpunished, you’d, at first blush, likely be a supporter of many of our district attorney’s policies.

But this is where the tragic irony arises. For Larry Krasner’s inability to work with others, his refusal to be accountable, his incompetence at simply managing an office of attorneys (hundreds of whom have left in disgust and fill up my inbox with tales of mismanagement and ideological rigidity that ultimately helps make Philadelphia less safe) … All of it has combined to jeopardize all the needed reforms Krasner has purported to stand for.

This despite the fact that he’s eschewed many of the policy innovations proven to work elsewhere, like court-mandated diversion programs, which lessen incarceration levels and provide opportunity to those who run afoul of the law to make the most of second chances.

You know the statistics: Murders are at an all-time high, as are arrests, and yet our District Attorney presides over a near historic low in gun possession prosecutions. Every day, it seems, there’s a fresh anecdote of revolving door justice.

“If you’re really concerned about Philadelphia why don’t you talk to all of the people who actually represent it? Wouldn’t that be a starting point? A rising Philadelphia means a rising 67 counties,” says Rep. Jared Solomon.

So let’s stipulate: Krasner has been a tragic failure, not just because the city is so much less safe on his watch, or even that the reforms he introduced were ill-advised, so much as he was not up to the task of smartly implementing them. Of simply governing. I’ve written ad nauseam on this, and am tired of my own voice on the topic, and of the hagiography of Krasner that continues from the political left.

To be clear: As voters have apparently twice concluded, Larry Krasner is not solely responsible for the madness and mayhem that runs amok on our city streets. But neither can we conclude from a couple of low turnout elections that he is without blame. In Chester and Camden and countless other cities, we’ve seen how collaboration among law enforcement and civic stakeholders can reduce lawlessness while respecting individual rights. Here, the fact that Krasner refuses to cooperate with the mayor, the police commissioner and other law enforcement entities has actually jeopardized the realization of just about everything he says he believes in.

All that said, the proposed cure that we’re hearing out of Harrisburg for the curse of Krasner is far more debilitating than the disease. Turns out, the only thing worse than Larry Krasner? Impeaching him.

Related from The Citizen
Who is Larry Krasner: A Look at the District Attorney of Philadelphia
By The Philadelphia Citizen Staff

Where’s the rationale for impeachment?

If you’ve been rightfully distracted by debates over John Fetterman’s ability to debate or the fact that we’ve suddenly, inexplicably kind of become a kickass sports town, you may have missed that the state House of Representatives has filed articles of impeachment against Krasner for “misbehavior in office,” which is defined as failing to enforce the law, subjecting his office to disrepute, and obstructing the House’s Republican-led Select Committee on Restoring Law and Order investigation into his conduct.

The partisan report from said committee did not recommend impeachment, but why let the facts get in the way of a good story? “The city of Philadelphia cannot afford to wait any longer for us to take action on what we already know to be true,” said Republican Rep. Martina White, the prime sponsor of the impeachment articles. “That Krasner is responsible for the rise in crime across our city due to his dereliction of duty to prosecute the guilty and to protect the innocent.”

This much is true: Krasner, for all his immense faults, is right when he says the House is seeking to “impeach our ideas,” even if some of those ideas are indeed bonkers.

The report is a damning critique of Krasner’s job performance, but it’s missing what is also absent from White’s public statements: Any rationale for impeachment and removal from office. Krasner does indeed suck; but nowhere is there a constitutional mechanism for getting rid of sucky elected officials. (Might ask the cynic: Who else would we get to serve, after all?)

There is no “high crimes and misdemeanors” standard in our state constitution, but clearly the Commonwealth’s founding document doesn’t sanction impeaching and removing from office elected officials simply for poor performance.

Article VI, Section 6 does say that “the Governor and all other civil officers shall be liable to impeachment for any misbehavior in office” — a phrase the House Republicans are disingenuously hanging their argument on. But nowhere does it suggest or imply that being seen as wrong can reasonably be construed as misbehavior.

But then, in Section 7, we get a pertinent definition: “All civil officers shall hold their offices on the condition that they behave themselves well while in office, and shall be removed on conviction of misbehavior in office or of any infamous crime.” The italics are mine; original intent is all the rage nowadays (see: Court, U.S. Supreme) and clearly mere misbehavior doesn’t rise to the level of removal from office. You must be convicted of misbehavior. What has Larry Krasner been convicted of?

Yesterday, I reached out to Democratic State Rep. Jared Solomon to kick this around. I called Solomon because, though he opposed the formation of the House Committee, he voted in favor of compelling Krasner to do as all other Philadelphia law enforcement-related entities did and comply with the Committee’s lawful subpoena. (That Krasner didn’t in full makes one wonder if, Trump-like, he’s only on board with the rule of law when it’s aligned with his own interests.)

“I read those Articles of Impeachment very carefully, and what the Republicans outlined was that he’s a horrible D.A.,” Solomon told me. “Well, look, I think Krasner is one of the reasons our city continues to decline. He’s got a go it alone strategy; he will not be held accountable; he shows no empathy to victims. To him, he’s right and the world is wrong. I get all that, but what else you got? The conviction of misbehavior wording in the constitution is really key here. I know that, apparently in this political climate, nothing is sacred anymore — not institutions, not constitutions. But you raise your hand and take that oath and a constitutional standard still has to mean something, otherwise we’re just going to start removing people from office we disagree with.”

There is a precedent — the 1994 impeachment by the House and removal by the Senate of then-State Supreme Court Justice Rolf Larsen, a law-and-order jurist (natch) who had been criminally convicted of having his doctor write him prescriptions for mood-altering drugs using the names of his court employees and who had a bad habit of agreeing to hear cases based on the advice of a generous political benefactor. Now that’s impeachable and removable conduct, no?

Guess who they forgot to ask about Philly?

Solomon is by nature bipartisan, and has worked closely with Republican White on securing funding for the state’s Gun Violence Task Force program. He sings her praises as a partner on policy solutions from across the aisle. Yet — and this is how you distinguish a cheap political stunt from a policy fix — no one from his opposing party invited him to partake in an intellectually open and honest look at how Philadelphia could be made safer.

“They’ll talk to me about a bridge naming in my district, but not about the removal of my twice-elected DA,” he says. “If you’re really concerned about Philadelphia, why don’t you talk to all of the people who actually represent it? Wouldn’t that be a starting point? To the chagrin of some of my colleagues, Philadelphia is the economic driver for the whole state. We ship them their goods; we receive their goods; we’re the historical and cultural center of the commonwealth. A rising Philadelphia means a rising 67 counties. But it’s easier to go back into some of those counties and say, I pushed back against the lawlessness of Philadelphia and get a few applause lines than it is to work together to make Philadelphia safer. This is a great example of how our politics have gone absolutely haywire.”

There is no “high crimes and misdemeanors” standard in our state constitution, but clearly the Commonwealth’s founding document doesn’t sanction impeaching and removing from office elected officials simply for poor performance.

How crazy is it? Many of those who still disingenuously claim that Donald Trump won in 2020 and who therefore wax on about “election integrity” seem utterly unbothered about overriding the legal votes of Philadelphians in two elections. Apparently situational integrity is all the rage in Harrisburg. So what’s going to happen? The House will likely have the votes to impeach Krasner. If the matter goes to the Senate, a two-thirds vote will be required to remove him from office. That would require a handful of Democrats to get on board. Unlikely — though who knows? Maybe some suburban Democrats could benefit from seeming to stand up to what their constituents might see as Krasner’s ideological war on safe streets.

Is it too late, Martina White and Krasner, et al, to just take a breath and try a little reasonableness for a change?

MORE COVERAGE OF D.A. KRASNER FROM THE CITIZEN