Dubbed by the New York Times the “most influential political writer of his generation,” Sullivan has staked out brilliant and controversial positions on everything through the years from same-sex marriage to critical race theory. Most fervently, Sullivan is a staunch enemy of illiberalism and a stalwart proponent of the saving grace of citizenship, as he will no doubt demonstrate in conversation with Citizen co-founder Larry Platt.

Out on a Limb

You can purchase copies of Out On a Limb from local independent bookstore Head House Books, our bookstore partner for this event. 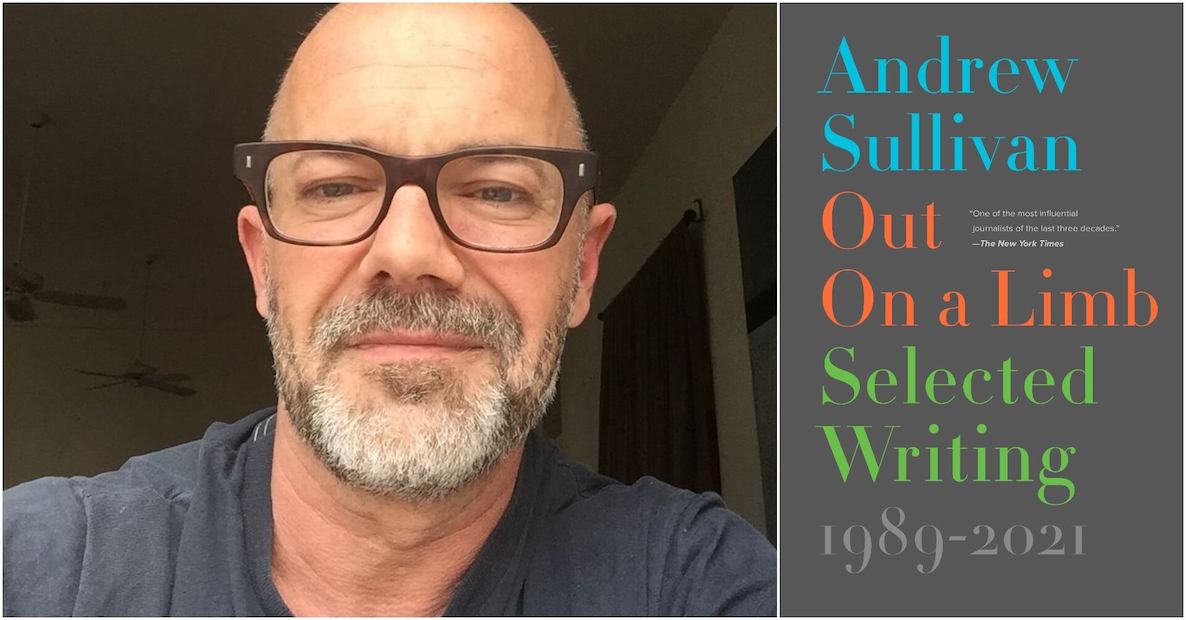 The author and free thinker joins us next Tuesday, September 21, for a virtual event. His defense of liberal democracy, pluralism and free speech is needed now more than ever

The author and free thinker joins us next Tuesday, September 21, for a virtual event. His defense of liberal democracy, pluralism and free speech is needed now more than ever

Once upon a time, our national conversation wasn’t conducted through 280 character, clenched-teeth screeds. Forty or 50 years ago, our pop culture stars included writers and artists and filmmakers, all coming to us intimately unpackaged.

Back then, there was an ever-thoughtful primetime talk show host named Dick Cavett who would bring a nightly cavalcade of provocative thinkers into American homes for real, unscripted give-and-take. Check it out on YouTube.

On his show, you could see men of letters go at it, as when Norman Mailer and Gore Vidal went mano-a-mano intellectually, while the writer Janet Flanner stole the show. Or you could see Southern segregationist Lester Maddox, brilliantly paired with NFL legend turned social justice warrior Jim Brown, taking umbrage at a Cavett question. “If I called any of your admirers bigots who aren’t bigots, I apologize,” Cavett coolly said.

What you saw on Cavett and in mass media as a whole back then was the collision of ideas all around you. There was no such thing as cancel culture; the ACLU famously defended the rights of neo-Nazis to march in Skokie, Illinois. As if advertising the unique idea of America itself, our national conversation seemed to relish in the exercising of First Amendment rights.

I’m reminded of those days now, as we welcome writer and provocateur Andrew Sullivan for a virtual event next week. That’s because Sullivan, 58, is an atavistic figure, having seemingly stepped right out of that freewheeling, free-thinking era. I can’t do his writing justice, and thankfully I don’t have to. His new book, Out On a Limb, is a compendium of his essays over the last 30 years; taken together, they’re a testament to the power of one man’s ideas, and also a love letter to what has become so endangered of late, quaint notions like pluralism and liberal democracy.

First, Sullivan’s power: It’s safe to say we might not have gay marriage today were it not for his insightful argument in the late ‘80s and throughout the ‘90s that loving, monogamous relationships—no matter the gender of those in them—ought to be embraced by conservative “family values” Republicans. He did what great writers do; he challenged orthodoxy and persuaded readers to his side. He appealed to the bedrock principles of Republicans—back when Republicans held them.

From gay marriage to critical race theory, from the “Hope and Change” Obama revolution in ’08 to his withering denunciations of Trump, Sullivan has been a let-the-chips-fall-truth-teller. And he has long been a reliable soothsayer. “An ideologically polarized country, in which one party uses big government for its own moral purposes and the other wields it for its own, is not one that can long maintain a civil discourse,” he wrote in 2005, predicting that our politics was well on its way to becoming war.

You may not always agree with him, but you’ll just as likely shrink from daring to debate him. Read this critique of Critical Race Theory and I dare you to not to see the ideology and just plain sloppy thinking in the writings of those who have perverted it, like bestselling authors Ibram X. Kendi and Robin DiAngelo. It’s not that they’re totally wrong; it’s that they’re too pat, and Sullivan reveals them to be bumper sticker-sloganeers dressing up their work as rigorous social analysis.

If you haven’t subscribed to Sullivan’s Weekly Dish newsletter, do so now. In it, he recently wrote this of the CRT fever:

Perhaps we can reach a place where we do indeed better acknowledge and understand the profound resilience of racism and sexism in this country’s history, and teach it better, and yet do not ignore the immense progress we’ve made, the deep complexity of many of these questions, or throw out the core principles of liberal democracy: freedom of speech, due process, individual rights, equality (not equity), and open intellectual inquiry. It’s clear to me that the antibodies to this new McCarthyism are beginning to propagate, and a calmer, middle way will at some point emerge. Which is another way of saying: as long as the First Amendment is intact, hang in, and know hope.

Over 30 years ago, Sullivan, a self-described gay conservative Catholic from Great Britain, was diagnosed with HIV. In a recent interview with Dr. Debra Sow, he talked about how that—a death sentence at the time—ultimately freed him:

And also the thing about AIDS, and watching, you know, half your friendship network die, and contemplating your own death as you saw them die, because you knew you were going to go through the same thing—it’s liberating. I mean, I thought I would have a few years to live. Why fuck with the bullshit when you’re going to die in a few years? Why not tell the truth? The book Virtually Normal? I wrote that because I thought I was going to die and I wanted to write something now, to leave behind, so the arguments for marriage equality, which were otherwise not being made, could be done definitively. And I could leave that behind…I’ll give you a tiny little anecdote. After I got into all that mess by publishing a symposium on The Bell Curve—which you weren’t supposed to talk about, let alone debate—but I’d published a symposium, a piece from the book and 13 criticisms of it. And it was a huge fuss. And I nearly lost my job. It was besieged within the office. I upset a lot of people. At some point, Charles Murray said, This must be a really life-changing moment for you. And I said to him, It isn’t. You don’t know this, but let me tell you now: I’m dying of AIDS, and half my friends are. I’m in a crisis. This [the Bell Curve controversy] is not a crisis. This is a tempest of ideas and slurs and stigmas and realities and debates, but it’s not for me a major life event. So there’s a certain liberation in having survived. And I think Churchill said there’s nothing more exhilarating than being shot at but not being hit. And I think the fact is, I’m still here, I’m still dodging the bullets.”

Next week, join me on Zoom or at Fitler Club for a watch party with Andrew on the big screen (email here to RSVP; a limited number of seats are available) as we celebrate that this intellectual gunslinger is still dodging those bullets. We’ll cheer him for that, yes, for withstanding the Twitter hate, the firings and the hit jobs, but we’ll also applaud his deep love for liberal democracy, and his rejection of team colors. He writes:

I have been criticized for abandoning the right, and for criticizing the left. I have also been assailed as a defender of the right and a hater of the left…I have never tried to be popular. I defended Monica Lewinsky against Bill Clinton, and Bill Clinton against Kenneth Starr. An essay insisting on the biological roots of masculinity enraged some feminists; my opposition to ‘hate crime’ legislation maddened my fellow gays; my account of the moment AIDS in America no longer qualified as a plague was denounced; my ferocious attack on the Bush administration’s endorsement of torture caused me to be canceled on the right in 2003. Similarly, my refusal to critical race and gender theory last year—and my horror at the riots in America in 2020—caused me to be fired by my own magazine, New York.

Supreme Court Justice Oliver Wendell Holmes, Jr. once said, “A man should share the action and passion of his times at peril of being judged not to have lived.” Those of us who value an engaged civic life? How lucky have we been to have Andrew Sullivan living and writing amongst us?