Tune In, Watch the Games

Follow The Citizen March Madness bracket this year and keep up with the games. Check out the schedule here and be sure to bring a copy of The Citizen’s bracket to your friend’s place, a bar or wherever you’re watching the game!

Eagle Eye
A local tech startup is a finalist in an NFL contest Saturday with an idea for one of the league’s biggest issues: Concussions
America Won the Super Bowl
Can last night’s win finally end Philly’s underdog story?
Blood, Sweat and Love
Suicide claims 20 veteran lives a day across the country. A weekly workout at one Chester County gym commemorates those who died—and helps keep others alive
We Town
Just 30 miles from Center City, a high school basketball team reminds us that sports and values need not be mutually exclusive
March Madness For the Socially Conscious
The NCAA Tournament is the sporting event of the year. Here’s how to enjoy it without being complicit in the exploitation of so-called “student-athletes” (Spoiler: Bucknell wins) …Of social consciousness, that is.

…Of social consciousness, that is.

Not so long ago, the city went agog over a sports team that had arguably become the most woke in professional sports history. Before and after every historic win, there was Chris Long, Malcolm Jenkins and their teammates—not to mention the organization as a whole—giving back to their rabid fan base.

Well, it’s deja vu all over again, as the NCAA men’s basketball tournament gets underway. Villanova, national champion just two years ago, is a favorite to do it again—they beat the Radford Highlanders last night, 87-61—all while modeling for others in the too often corrupt, exploitative realm of big-time college sports that academics and athletics need not be mutually exclusive.

Here’s a bit of background. Last year at this time, we asked a question: What is someone who loves March Madness, but who is also afflicted with a social conscience, to do? The answer we came up with was to pick your teams the way I’ve long done: Based on graduation rates.

So again this year, we give you The Citizen March Madness Bracket. 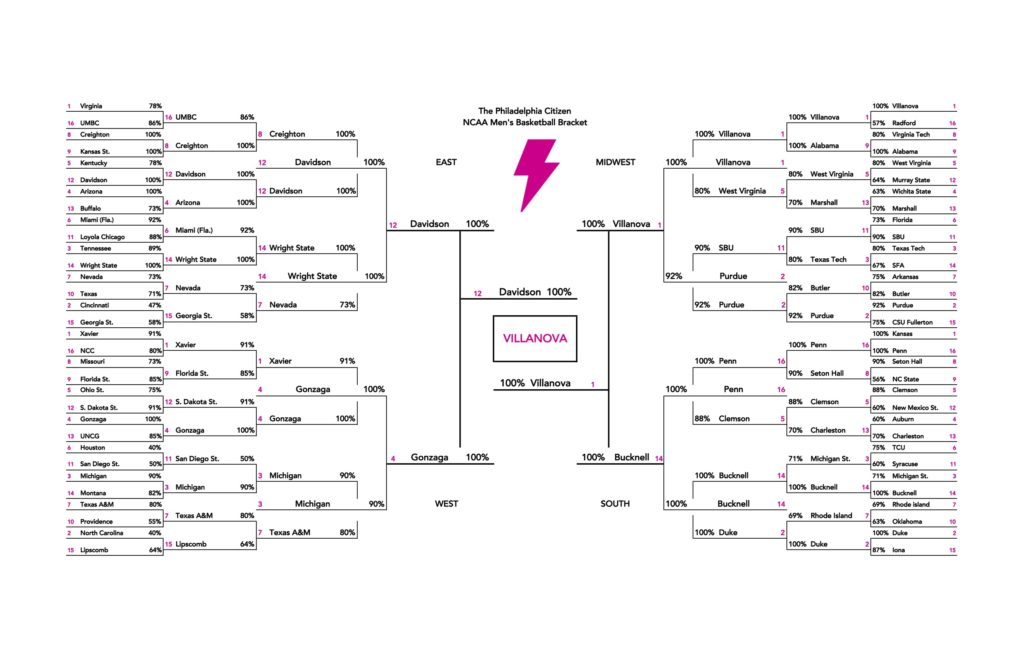 In addition to each team’s tournament seeding, The Citizen Bracket includes another metric for each team: Graduation Success Rates (GSR), which reflects the proportion of athletes a team has graduated within a six year time frame. When the teams with a 100 percent GSR meet, we take into account another metric: Academic Progress Rates (APR), a multi-year tracking of a team’s classroom performance. In the final, both Davidson and Villanova have the same scores on both fronts—so naturally we picked our local boys.

Data has been taken from the just-released annual report of The Institute for Diversity and Ethics in Sport at the University of Central Florida. According to the study, 47 teams of the 68 tournament teams graduated 70 percent or more of their men’s basketball student-athletes in 2018, and 12 had a 100 percent graduation rate, among them: Creighton; Davidson; Wright State; Gonzaga; Duke; Penn; Bucknell; and Villanova. That means that, given those last three, our metro region fielded a quarter of the best academically performing schools in the tournament.

It’s easy to lose sight of just what an anomaly Villanova is. In the era of the one-and-done collegiate career, whereby 18-year-olds spend a year as rent-a-students auditioning for the NBA, there’s something remarkable about Villanova, one of the last small Catholic schools to compete at the game’s highest level, producing few NBA stars and graduating all its players.

But Penn and Bucknell aren’t exactly hoops powerhouses. Villanova—the nation’s winningest team over the last four years—is, and it’s easy to lose sight of just what an anomaly they are. In the era of the one-and-done collegiate career, whereby 18-year-olds spend a year as rent-a-students auditioning for the NBA, there’s something remarkable about Villanova, one of the last small Catholic schools (some 6,000 undergrads) to compete at the game’s highest level, producing few NBA stars and graduating all its players.

It’s a testament to Coach Jay Wright, who, if game announcers are to be believed, is little more than a nattily-attired George Clooney clone. In reality, as I chronicled last year in the pages of GQ Magazine, he’s a master at coaxing a group of young men to value we over me, equipping them with bracelets reading “Humble and Hungry” and warning them ad nauseam that ego kills. And he walks that walk, going so far as to have a type of Zen master coach with him on the sideline, someone charged with dissecting Wright’s own interactions with his players in order to guard against old-school manifestations of top-down control. Wright’s team doesn’t have “plays,” per se; instead, he talks about giving his players “the freedom to make plays.”

Lo and behold, his team consists of men who embrace moments others shrink from, be they on the court or in the classroom. Junior Jalen Brunson, the leading candidate for National Player of the Year, is a Second Team Academic All-American with a 3.34 GPA in Communications and has reached his goal of graduating in three years—while essentially holding a full-time job as basketball star. Then there’s freshman behemoth Omari Spellman, who writes moving poetry and is a walking advertisement in these days of NCAA scandal that the ancient Greek idea of kalokagathia—bodily and moral and intellectual excellence—was onto something: That athletics can be an intrinsic part of the education experience, and a way to discover things about oneself.

So here’s to Nova Nation, for doing it the right way, and to the other schools in our bracket who don’t pervert the actual purpose of education.