Tattoo Monologues is available for purchase on bookshop.org, and at local bookstores including: Big Blue Marble Bookstore in Mt. Airy; Philly AIDS Thrift at Giovanni’s Room in Center City; and Head House Books in Queen Village. 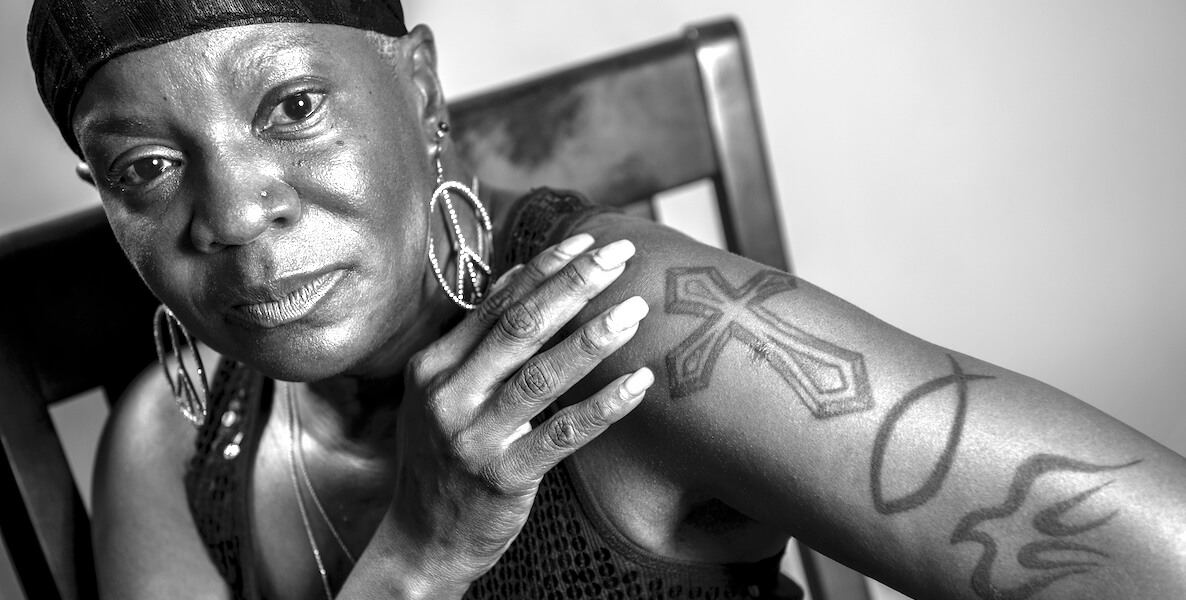 A new book from a Philly health care worker features 29 local women with tattoos that tell their stories of trauma, healing and resilience.

A new book from a Philly health care worker features 29 local women with tattoos that tell their stories of trauma, healing and resilience.

When Donna Torrisi first discovered that her 17-year-old son had a tattoo, hidden on his back underneath his T-shirt, she was decidedly not “with it.”

“I thought of tattoos as things that gang people got, and, you know, drunken sailors,” she says. “But I realized I had to either join him and understand more about it or alienate him, and I didn’t want to do the latter.” At the time, Torrisi, a nurse practitioner, was working as the executive director of the Family Practice and Counseling Network (FPCN), a community health center she founded in Philadelphia in 1992. Several years later, in 2015, she started asking some of her co-workers and her patients—many of them women—about their tattoos.

Out of conversations like these was born the idea for a book focusing on women with tattoos related to “recovery and resilience” in their own lives. Working alongside co-author and social worker John R. Guiliagno and co-author and photographer Ken Kauffman, Torrisi compiled the stories of 29 women and their tattoos, based on interviews with each woman. Kauffman’s striking photos help document the women’s journeys and the imagery of their body art.

Manya Echols, administrative assistant at FPCN and Torrisi’s coworker, was the first woman she interviewed about her tattoo. Like Torrisi, Echols for a long time “didn’t like tattoos.” But that changed with a sudden, unexpected tragedy: Her daughter, Jaquaya Echols, died in a car accident.

“She was a mini-me,” Echols says, explaining that her daughter worked to take care of her brothers, Echols’ twin autistic sons, who were toddlers at the time. “She had my back with everything…When I was at work, she would have to come home and have to take care of her brothers as I did. She would have to feed them, change their pampers, give them their medication, and so when she died, I had this void. And I missed her so much.”

So Echols decided to get a tattoo that was particularly meaningful to honor her daughter and provide comfort to her: Jaquaya’s name, with angel wings, on her back, as a reminder that she would always have her back.

“Losing her was so unexpected and so devastating, that was a way for me to have her as a part of me, I guess,” Echols says.

Officially available online and on bookshelves October 19, Tattoo Monologues: Indelible Marks on the Body and Soul, from She Writes Press, is the product of Torrisi’s journey to understand more about the healing narrative powers of tattoos for women who have experienced trauma.

One woman featured in the book reclaimed a traumatic childhood memory of being molested by tattooing an image symbolizing the name of her abuser on her arm. Another inked a paw print of her chihuahua, Elf, a rescue dog who she tells Torrisi “rescued her” in the aftermath of surviving a horrific attack from another dog at the animal shelter where she worked.

“I learned that it’s very very common for women to have a tattoo that represents something very very difficult that they have overcome. I learned more about how a tattoo played a part in overcoming a trauma,” Torrisi says.

Torrisi says that some of the women featured in the book were her patients; some, like Echols, were her coworkers. And many are women that Torrisi came across in her day-to-day life—at the gym, at clothing shops, in transit—and whom she asked about the stories of their tattoos.

“It was really easy. There’s many more women I would have loved to have in the book,” Torrisi says, acknowledging that at a certain point she had to stop collecting those stories and focus on finishing the writing and editing process. She also wanted to be sure to produce a final book that the women who were featured in it could be proud of.

“These women were waiting to see something happen, and I just felt like it was fair to them that I needed to have their story out there,” Torrisi says.

Echols and the other women featured in the book will gather at Torrisi’s house at the end of October to receive their copies of the book, and share their stories directly with one another.

“Trauma is not exclusive to the 29 women in my book,” Torrisi says. “Not everyone has the experience that Manya had that was profound, and the unthinkable, but none of us escape suffering in life.”

She hopes readers connect with the resilience of the women featured in the book, and the roles that those tattoos played in their healing and recovery, through, as Torrisi found, “the feeling of the physical presence, the telling of the story, and taking back power.”

As for Torrisi, a few years after first discovering her son’s tattoo, she found herself side by side with him at a tattoo parlor, getting her own ink: an image of the heroic Tinkerbell from Peter Pan, who is prepared to give up her life and drink poison to save Peter. For Torrisi, it’s a symbol of the power and importance of friendship and loyalty—a story of all we can do for one another.

Tattoo Monologues is available for purchase on bookshop.org, and at local bookstores including: Big Blue Marble Bookstore in Mt. Airy; Philly AIDS Thrift at Giovanni’s Room in Center City; and Head House Books in Queen Village.

MORE BOOKS NEWS FROM THE CITIZEN

How to Start Little Free Libraries in Your Neighborhood