Don’t be a bystander. You can help curb calls like this by filing a complaint against those who may be obstructing emergency services or are involved in disorderly conduct.

Click here for info on complaint filing procedures and here for more on the process.

Reality Check: Why Aren’t We Talking About Our Water Bills?
Last week’s water main break is evidence of Philly’s infrastructure problem. But WURD’s afternoon host wonders why higher fees are again the city’s only solution
Reality Check: Don’t ‘Philly Shrug’ This
Philly gun violence is rising at an alarming rate. Are you paying attention, Larry Krasner?
Reality Check: Brainstorming Better Turnout
This month’s primary saw an even lower number of voters than the lows of late. WURD’s afternoon host offers ways to fix our broken democracy 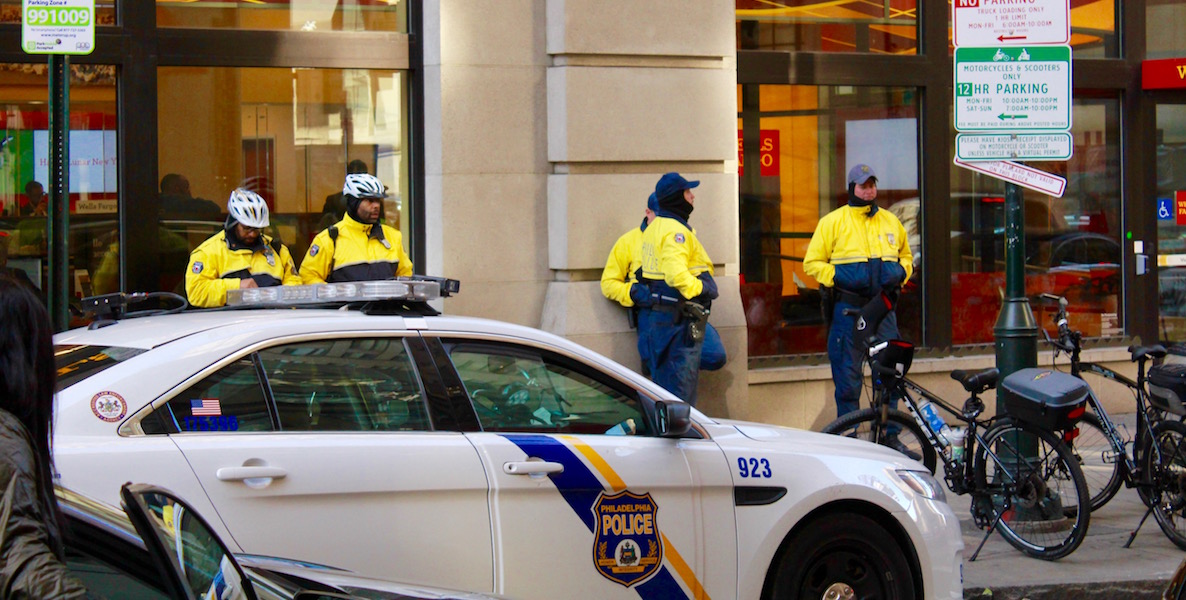 In the wake of unwarranted arrests at Starbucks and the Zoo, WURD’s afternoon host says it’s time the city and state made it clear that racially-motivated 911 calls will not be tolerated

In the wake of unwarranted arrests at Starbucks and the Zoo, WURD’s afternoon host says it’s time the city and state made it clear that racially-motivated 911 calls will not be tolerated

Black people, especially in Philadelphia, are fighting a multi-front war. Poverty remains high, along with chronic unemployment and underemployment, and it’s increasingly hard to find an affordable place to live.

But, on the public safety front, it’s worse. One day, your neighborhood is shot up and someone’s killed; the next day your risk for ending up in “the system” rises, and the day after that you don’t know if you’ll survive some random, unforeseen and racially-charged beef with a cop.

So, if you’re living black in Philly, the last thing you expect to worry about, on top of all the worries you’ve got, is to have some anxious, phone-at-the-hip white person call the police on you just because you don’t “look right,” didn’t “act right,” or “talked to them the wrong way.”

The last time we heard about something like that was a little over just 50 years ago, when the Civil Rights Act, complemented by the Voting Rights Act, effectively invalidated Jim Crow Laws in the South. Vestiges of Jim Crow continued throughout the 1960s, with some stubborn hold-outs pushing the limits in the very early 1970s. Eventually the nation, even in the South, accepted the notion that “Whites Only” spaces were not only unnecessarily cruel and immoral, but something of a bad business model—inefficient, low class and unbecoming of a society calling itself democratic. Globally, it was just embarrassing.

Yet in Philly, progressive bastion and urban East Coast gem of the North, where “democracy was born,” we are allowing ourselves to quietly slip into a form of Jim Crow-lite. It’s not official. No ugly “Black Codes” have passed through City Hall into ordinance, nor is anyone openly condoning forced legal segregation of populations.

But spaces for black Philadelphians are limited. Which is why two major, nationally-viral incidents of non-emergency 911 calls on black residents within a span of several months is something Philadelphia should worry about. Even when the city thought that the infamous Starbucks incident was left way behind in the rear-view, it wasn’t. That lesson was not learned. Yet another white person in a small spatial position of pseudo-authority, this time a Philadelphia Zoo security guard, found it necessary to unnecessarily unleash law enforcement on a 15-year old black teen for simply selling water (without a permit) on an urban heat island day.

Clarification from the PPD could help mend frayed police-community relations by sending a message to Philly’s rattled black community that, at least on this issue, law enforcement is looking out.

This fits a growing pattern of Jim Crow-like behavior throughout the nation, caught on video in many instances, in which white people are calling 911 on black people for some of the most innocuous and non-threatening things. A black woman and her child in North Carolina can’t take a swim in their neighborhood pool without a white man calling police to verify her identification and entry card into the pool.

A group of harmless black women in York, PA, playing golf find themselves harassed by country club management and then faced with a police call to the course. A black man in Tennessee gets the police called on him for simply wearing socks in a public pool. Another black Memphis man, a real estate investor, can’t inspect a potential property without a white resident calling cops on him.

Another black man in San Francisco is approached by police, while they’re positioning hands on weapons, as he’s opening the business he owns because an anonymous white resident believes he is breaking into his store. And, let’s not forget about the deadly 911 call on the late 12-year old Tamir Rice in Cleveland simply for playing with a toy gun in the park. The list goes on and on.

Philly has now submitted not just one infamous incident, but two incidents added to that disturbing trend. People are using law enforcement to draw out their racist demons. But most of these situations that are caught on video—even in Southern U.S. metropolitan areas—end up with police gradually backing off after realizing they’ve been bamboozled into another bigoted “cry wolf” call.

But, Philly is special in these situations. In both instances where Philadelphia police were called, not only did they not assess and conclude that it was a bullshit call—but they actually, while knowing they were being videotaped, doubled down and owned the call by arresting black individuals who were clearly targets of racial profiling and foul play.

The Starbucks fiasco was an abuse of 911 that responding Philly police allowed themselves to get gullibly punk’d into when they should have either had the common sense or procedural departmental guidance not to. Strangely enough, Starbucks—which had no control over a bigoted employee’s racist tendencies—caught fire for the incident, while city police slithered away from the crime scene virtually unscathed. The same happened at the Philadelphia Zoo when police clearly saw, like they did at 18th and Spruce, that it was a non-emergency situation.

So, why the hell did people end up getting cuffed?

No one has yet been prosecuted for calling police during a non-threatening, non-lethal and ultimately non-emergency situation. That hasn’t happened nationwide and it hasn’t happened in Philadelphia. Policymakers and law enforcers should telegraph aggressively to the public that this behavior is unacceptable and violators will themselves face a penalty. This is an area where Philly could be a national leader.

Instead, we’re waiting on public digital shaming of individuals who commit these crimes and hoping they’ll get fired. City leaders refuse to offer clarification or a public call that discourages “cry wolf” racially-driven abuse of citywide 911 systems. That’s somewhat weird: Philly knows it has a non-emergency 911 call problem because the city’s fire department has waged a campaign since 2016 to crackdown on the practice.

We have yet to get any clear guidance from the Philadelphia Police Commissioner or the Philadelphia District Attorney on whether police officers are receiving internal guidance on how to deescalate a situation so they are not arresting non-threatening citizens. (There have been no responses to Reality Check’s request for clarification.) Is there a policy so people who are abusing 911 out of racist motivation are arrested, prosecuted or, at the very least, fined? The city can’t and won’t answer that question.

Philly knows it has a non-emergency 911 call problem because the city’s fire department has waged a campaign since 2016 to crackdown on the practice.

And clarification from the PPD could actually help mend frayed police-community relations by sending a message to Philly’s rattled black community that, at least on this issue, law enforcement is looking out. Right now, as it stands, the perception is that Philadelphia Police are happily complicit.

There are Pennsylvania statutes penalizing individuals for “false reporting.” According to Section 4906 ‘a person who knowingly gives false information to any law enforcement officer with intent to implicate another commits a misdemeanor of the second degree.” Of course, it’s not as clear cut and there’s nuance; as one police department source indicates “it’s not that simple because you don’t want to discourage residents from calling 911 when they really need to.”

Which is a good point. But, something must be done before this current pattern, still carried on without punishment, spirals out of control. WURD legal analyst and prominent Philadelphia attorney Michael Coard agrees. “We need to send a message that helps black folks in this city and sends a chilling message to white folks that it’s unacceptable and not allowed,” Coard tells Reality Check. Still, he acknowledges: “It’s very difficult to get someone prosecuted for behavior like this.” Even with PA codes like 4906, the actual event itself “must be false.”

“But it is a step in the right direction to put a stop to it before it gets out of hand and we’re suddenly faced with a situation where black people can’t step outside or leave their homes out of fear they’ll have police called on them for no reason,” Coard says.

Still, Coard advises people to file private criminal complaints under 5112 when these events happen. Or pursue a charge under PA 5503, disorderly conduct, which is when you create a hazardous or physically dangerous situation. If that doesn’t work, then Coard presses that local civil rights organizations need to step up and go old school on the issue like it’s 1955. The Philadelphia NAACP and others need to suit up with pro bono hotlines people can call into for help.

To date, there’s no sign any organization is setting that up, or doing much beyond posturing on this issue. Philly NAACP Chapter President Rodney Muhammad thought it was an intriguing idea (“something worth looking into”) and there was some follow up with Philadelphia Police Commissioner Richard Ross about it (who said that officers could have used “better judgement”). No hotline is set up, yet leadership of organizations such as the National Bar Association and National Action Network, have made verbal commitments on air, when asked by Reality Check.

Coard believes the situation is so urgent that Philly and the rest of the Commonwealth need to craft law much like that in Washington state. “We need to carbon copy Washington’s ‘misuse of 911 system’ law. It’s solid on this matter. You are guilty of that crime whenever you make a calll.”

State Representative Donna Bullock cautions that a bill like this must be crafted carefully. “How do you look at these laws in the context of see something, say something?” she wondered to Reality Check. Still, she agrees that it’s time for Harrisburg to step up where cities like Philly and York have not. “It’s this over-reaction to these situations that’s troubling where some people don’t know how to respond other than to weaponize their fear,” Bullock says. “I’ve heard from a lot of law enforcement who say that happens a lot. That’s wrong.”

Charles D. Ellison is Executive Producer and Host of “Reality Check,” which airs Monday-Thursday, 4-7 p.m. on WURD Radio (96.1FM/900AM). Check out The Citizen’s weekly segment on his show every Tuesday at 6 p.m. Ellison is also Principal of B|E Strategy and the Washington Correspondent for The Philadelphia Tribune. Catch him if you can @ellisonreport on Twitter.