Home » Food » Foodizen: Why Is Ravioli Worth More Than Pierogi?

A Woman’s Place ...
… is running the kitchen, despite restaurants still being mostly male-dominated. Philly proves that’s true at an event with influential food magazine Cherry Bombe.
Foodizen: Composting in the City
Philadelphians dump 400,000 tons of food and yard scraps into the landfill every year. A city community composting pilot is working to put that waste to good use
Foodizen: When Celery Was the Avocado Toast of Its Day
A Fishtown restaurant takes us on a culinary journey into Pennsylvania’s past. Waffles and catfish, anyone?
Foodizen: Bee the Change
Protecting bees is critical to preserving our food supply. Some 50,000 rooftop bees, including ones in the evolving Spring Arts District, are doing a small part of what Philly needs
Foodizen: Generation Urban Farmers
W.B. Saul, the largest agricultural school in the country, trains students in the art of farming. Yes, even in the city
Foodizen: Dinner on the Farm
What’s even better than a farm-to-table dinner? A farm-to-farm table dinner, that also helps keep small, sustainable farms afloat

Philadelphia’s River Wards, particularly Port Richmond, have been a Polish-American enclave for decades. Here are a few of food writer Jason Wilson’s favorites for Polish food in Philly. Go super hungry and make a whole food tour out of it. 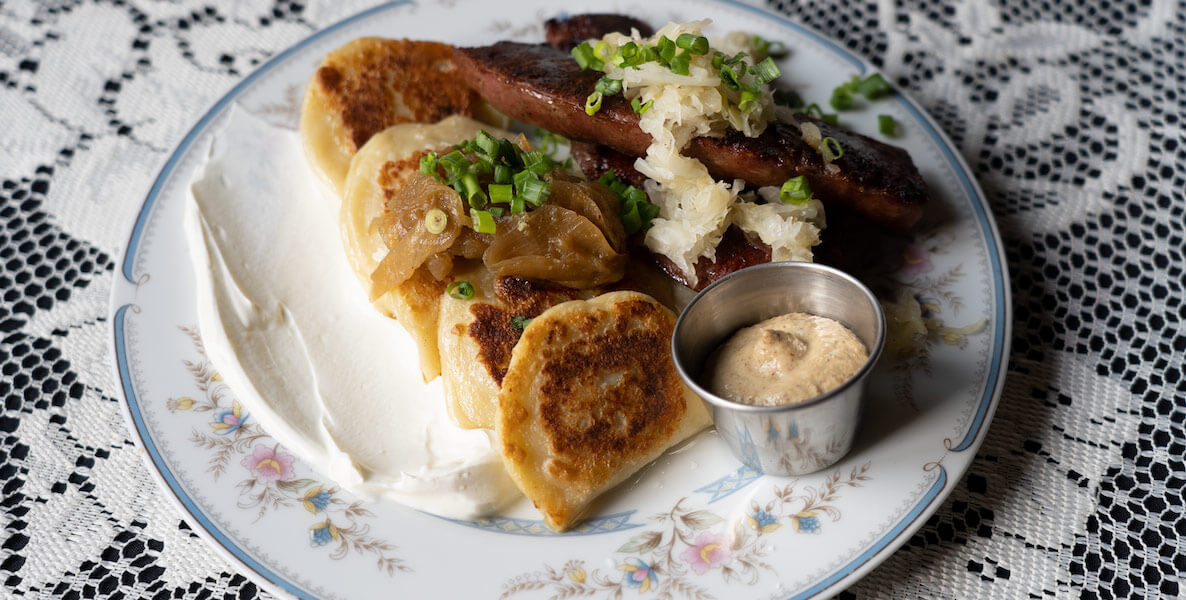 How Mom-Mom’s Kitchen is working to spread the good word on Polish food in Philadelphia. Their latest venture on South Street is set to open this winter.

How Mom-Mom’s Kitchen is working to spread the good word on Polish food in Philadelphia. Their latest venture on South Street is set to open this winter.

[Editors note (4/5/2021): This article has been updated to reflect the news that Mom’s Mom’s is now open on South Street]

Ryan Elmore has learned a few lessons about pierogi in the four years since he and partner Kaitlin Wines started Mom-Moms’s Kitchen, first as a Polish food cart and then as a stand-alone restaurant in Bridesburg.

First, Elmore says: “Never make pierogies alone.” He and Wines learned quickly that there’s a reason pierogi-making has long been the domain of clusters of older Polish women in church groups during the holidays. “It’s a group project, a family project. It’s really labor intensive. To make 200 to 300 takes about four to five hours.” At this point, Mom-Mom’s Kitchen makes about 3,000 to 4,000 hand-pinched pierogi each week.

The next hard truth: “You don’t make as much money on pierogi as you do on ravioli,” he says. In the unjust dumpling economy (which David Chang railed against in Ugly Delicious’ first season) a pierogi costs slightly more than a Chinese dumpling or an empanada, but significantly less than a plate of stuffed pasta in an Italian restaurant.

Whether it’s due to labor intensive methods or cultural chauvinism, there’s an egregious lack of awareness of Polish cuisine. “Polish food is really underrepresented,” Elmore says. “There’s not many young people making Polish food.” Wines and Elmore have made it a mission to correct this.

Related from The Philadelphia Citizen:
Outdoor Dining in Philadelphia
Follow our guide to outdoor dining in Philly this spring to discover spots around town for delicious food and drink in gardens, on tucked-away patios and other Insta-worthy surrounds

Named after Wines’ 97-year-old grandmother, Mom-Mom’s Kitchen began as a 4-by-8-foot food cart in 2015, often parked at the Garden Variety beer garden in Northern Liberties or late night in Fishtown at Frankford and Girard.

They finally opened their standalone location in 2018, in what was a shared kitchen associated with Bridesburg Commissary, which operates next door with 60 other small food businesses. “Bridesburg is thick with Polish-Americans,” Elmore said. “Port Richmond is kinda ‘up-and-coming’ but Bridesburg is the total opposite.” Philadelphia’s River Wards, particularly Port Richmond, have been a Polish-American enclave for decades. Going to Czerw’s for kielbasa or Stock’s Bakery for a brick of dense pound cake, or stopping at my favorite, The Dinner House, for a meal of pickle soup, stuffed cabbage and pierogi are all classic stops for lovers of Polish food.

The community has been affected by a shutdown of the Richmond Street trolley in 2012, and then by recent construction on Richmond Street and Allegheny Avenue. In 2018, longtime Polish favorites Syrenka Luncheonette and Krakus Market both closed. But with trolley service expected to return next year, Port Richmond will be much more accessible and there’s optimism things will pick up again. (Another good pierogi option is The Pierogie Kitchen in Roxborough).

Meanwhile, a little further northeast, Mom-Mom’s Kitchen is pushing the boundaries of tradition. Next to classic potato pierogi, spicy kielbasa from Czerw’s, pickle soup, beet salad and golabki (cabbage rolls stuffed with beef, pork, and rice) are nontraditional offerings such as, yes, the Philly Cheesesteak Pierogi. “The old people in the neighborhood say, ‘This is fancy for Polish food,’” Elmore says. “It’s not really that fancy. We just happen to put fresh dill on it. We’re creative but we’re still making home-style comfort food.”

With feet firmly in both traditional and non-traditional, it’s no surprise that the next move for Mom-Mom’s Kitchen was to raise more than $13,000 on Kickstarter to open a new takeout location on South Street, next door to iconic dive bar Bob & Barbara’s Lounge, a Philadelphia drinking institution.

Elmore and Wines already knew that Polish food was a hit with the drunken after-bar crowd in Fishtown. A throwback spot like Bob & Barbara’s seems like a good fit for updated Polish food, which will pair very well with a Citywide Special.

“Bob & Barbara’s is a relic. It hasn’t changed in my 15 years of drinking in this city,” Elmore says. “The owners were all about our food. It’s better than french fries. It’s comfort food and soul food, and really good with beer.”

Yet more than just serving boozy night owls, Elmore and Wines see the new location as exposing a younger generation to the joys of Polish food.

“Going through life having never experienced the joy of creamy potato & cheese (or a myriad of other fillings) crammed into hot pockets of tender dough is a scourge to humanity that MUST BE STOPPED,” reads their Kickstarter page. “We know that with the passage of each generation, this incredible ‘grandma food’ and all the treasured culinary tradition that goes along with it, is literally ‘dying out’… Mom-Mom’s must preserve tradition, maintaining our Polish flavor within this melting pot which makes America so great.”

When we discussed why Polish food isn’t more popular, I wondered aloud if it’s maybe because people think it’s heavy, with lots of sour cream, butter and egg yolks. Elmore sighed and said, “Well, it is.”

He admits that there had been discussions over whether to offer a vegan pierogi, and how that would be received. Would it appeal to younger diners? Would it be seen as heresy by the traditional Polish community? “Vegan pierogi is something that we’ve been talking about forever. I’m a little afraid to go down that road,” Elmore says. “But I think at Bob & Barbara’s we’re going to have to do it.”