Check out the Vote That Jawn blog and follow them on social media to stay in the loop.

Read the Bullhorn—Philly’s new citywide student-run newspaper—for stories like: The Effect of COVID-19 on Small Businesses, Classroom Size and The School District; and How Coronavirus Exposes the Flawed Public Health System Within Schools.

Check out the Foreign Policy Youth Collaborative (more on that here) for stories like Climate Change is Happening Whether We’re Ready or Not, Why the Voting Age Should be Lowered to 16 and Hostages in Their Own Homes: The Lives of Women in Afghanistan.

Guest Commentary: A Love Letter to the Post Office
The USPS is in the news these days for its (potential) election-related failings. But a novelist and Penn professor remembers it for its beauty
Guest Commentary: Choose #BlackLife
A novelist and Penn professor joined the massive Philly march for black lives on Saturday—and found hope amidst the grief
Where is Home?
A Penn student’s program for African immigrant children explores what it means to have a home in two worlds—and what language to say it in
Welcome to your new home, Habibi!
A bestselling novelist and founder of SafeKids Stories joins a musical tribute welcoming Syrian refugees to Philadelphia
"Tastes Like Someone Cares"
During a day in the life of a Vetri school kitchen, a bestselling novelist and founder of SafeKidsStories discovers the secret ingredient behind healthy lunches
Vote That Jawn
The Citizen joins bestselling novelist and SafeKids Stories founder in launching a citywide effort to get young people to the polls. We need them now more than ever

Here are some ways you can make a difference now:

Support Black-owned businesses, especially now.
Small businesses owned by people of color have been the most left out of government loan programs—and the failure of a whole swath of the economy is wreaking havoc on already poor communities in Philadelphia. Order food through Black and Mobile, which is like Caviar for black-owned restaurants. For our nation to heal, we must open our ears and hearts to the messages our young people are sending us

For our nation to heal, we must open our ears and hearts to the messages our young people are sending us

Look at those beautiful children! Socially distanced. Coats on against the chill. Lined up and climbing to sit astride the wall that runs around their church—the church that old, white parishioners tried to wrestle away from the Episcopal Diocese of Pennsylvania all for themselves , and lost in the early 2000s.

Now the campus houses an Episcopal middle school, welcoming neighborhood children who came out onto their busy corner to mount a handmade GOTV rally. Their signs tell us: Their literacy connects to Black Lives Matter, which connects to voting.

St. James’ new director of choral music and art/music education, Javvieaus Stewart, has been teaching a unit on hip-hop that underscores the connections. The school newsletter reports that she “started with the four basic elements of hip-hop: graffiti art, breakdancing, DJing and rapping.”

I couldn’t help but think of the curriculum by Dr. Decoteau Irby we commissioned at Art Sanctuary, a Black arts organization I founded in 1998, now coming to shelter under the wing of the African American Museum in Philadelphia.

Do The Knowledge Learning Guide remains an excellent guide for teachers — and a refreshment in the classroom. Like Ms. Stewart’s middle school class, it begins with the four elements of hip-hop and connects them to ways Black culture conveys knowledge.

Art Sanctuary’s after-school students loved it. Teaching spoken word through that curriculum led to a “hip h’opera” song cycle in partnership with Opera Philadelphia, which laid a foundation for their stunning 2017 opera, We Shall Not Be Moved.

From Ideas We Should Steal Festival 2020
New album by Philly students is a poignant soundtrack to 2020
With Hill-Freedman World Academy’s fourth album, students weave the anguish of a painful year into powerful new music

And what does that culture teach us, in its percussive wisdom? Inside, at the core of hip-hop, is joyous storytelling and word-play made more emotionally powerful by an infinite variety of beats. Hip-hop makes meaning from the found objects of Black Lives. Even in its usually male, seemingly individualistic lyrics, the Black cultural foundation of hip-hop encourages resilience. It assumes that political critique will pivot directly toward action for justice. So Ms. Stewart introduces them to old-school and “conscious” hip-hop, including Tupac, whose album “Me Against the World” links through to When We All Vote, including these famous lyrics:

Always do your best, don’t let this pressure make you panic / And when you get stranded / And things don’t go the way you planned it / Dreamin’ of riches, in a position of makin’ a difference / Politicians are hypocrites, they don’t wanna listen.

But they will listen, politicians, that is.

Would that more of white America could learn to vote in the spirit of these youngsters in North Philadelphia’s Allegheny West neighborhood. There they stand outside their school without the shame, blame and disrespect, as Brené Brown tells us, that undercuts so much of America’s ability to imagine a larger, more resilient sense of belonging.

Black Lives already know everything America is ashamed of. Kids too young to vote know it. They accept that we’ve got to live together. What’s non-negotiable, because it is as true as the precious gift of consciousness, is that Black Lives Matter.

Even in its usually male, seemingly individualistic lyrics, the Black cultural foundation of hip-hop encourages resilience. It assumes that political critique will pivot directly toward action for justice.

Because conditions necessary for Black Lives sustain us all. If Black Lives Matter, really matter, then we’ll begin to grieve together for slavery. When Black Lives Matter, America can look through the Eye of Providence on our greenbacks and create measures for the imprint of separated families and sacrificed lives on our wealth. And if we were to know that, feel it, wonder and think and pray about how to make some amends toward the karmic debt of Black Lives Wasted, still wasting, today, well then, maybe the scales would drop from American eyes. Then we could never sanction the United States taking children from healthy, competent parents who love them enough to carry them 1,000 miles thinking they’d escape the worst harm they could imagine.

Think of the weight of shame that would be lifted from our unloved and unloving electorate. Tubman said it, and Frederick Douglass, and so many more in so many ways. These children have written it onto their sign, God bless them. Look, all the way at the back of the photo: 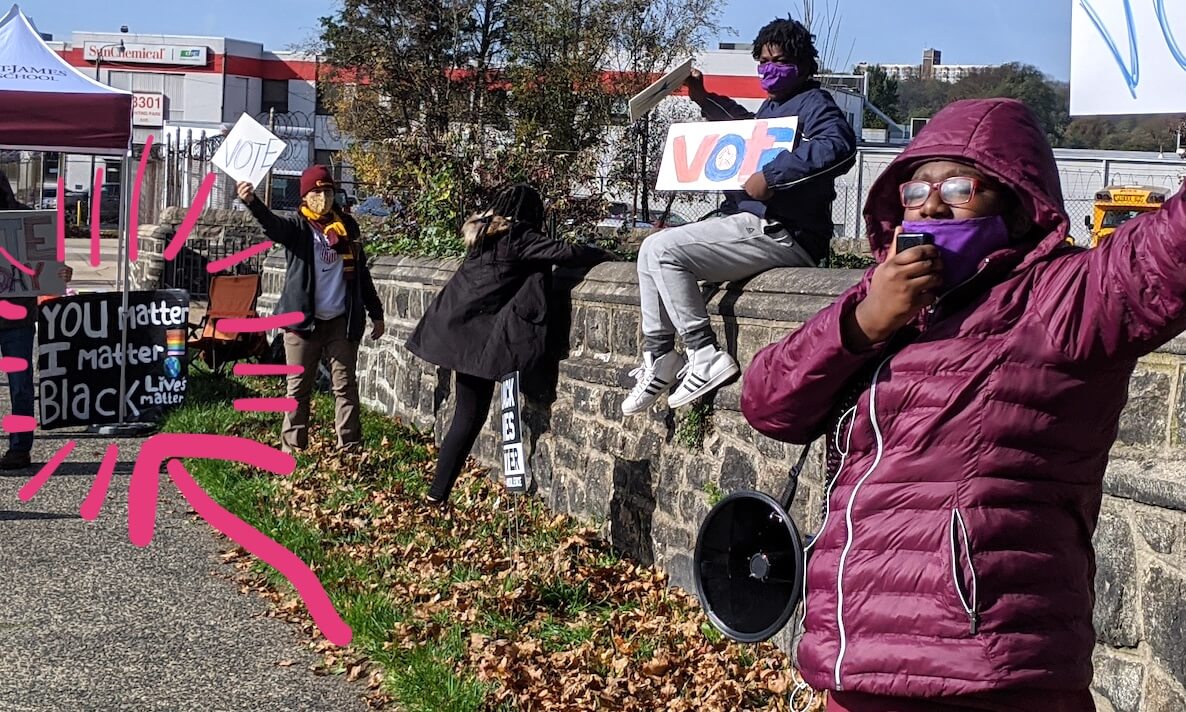 Lorene Cary is a lecturer at Penn and author, most recently of Ladysitting: My Year with Nana at the End of Her Century, a care-taking memoir, and My General Tubman, a play about the complex journey of the abolitionist/activist that ran this year at Arden Theatre. She is the founder of #Vote That Jawn, the initiative to register and engage young voters.