Listen to our youth! Check out the Foreign Policy Youth Collaborative for stories like Climate Change is Happening Whether We’re Ready or Not, Why the Voting Age Should be Lowered to 16,and The New Cold War – and what it means for Americans.

Grabbing the Bullhorn
A new citywide student-run newspaper is a connection among Philly high schoolers—something missing even before the pandemic
The Citizen Recommends: Philadelphia Youth Film Festival
The third annual student-run event showcases the work of young filmmakers from Perth to Penn’s Landing
Free Our Youth
It’s 2020 and teens in Philly are still being held in adult prisons. This youth-led group wants to change that, and help heal communities
Citizen of the Week: Imere Williams
The Boys’ Latin senior, one of two student reps on the School Board, wants to be the voice of his peers
“They Can Win”
When their garden project was halted because of lead in their school, students at Furness High School embarked on a different campaign: To clean every toxic school in Philly
It’s Your Move
A new campaign for teens—and by teens—aims to stop prescription opioid misuse
Students To The Rescue
Students from 20 Philly high schools tackle food insecurity, food waste and school violence through the Aspen Challenge.
Citizens of the Week: Tools for School
In 2013, a Cherry Hill family launched a teen-led initiative to get school supplies to kids who needed them. Today, it distributes backpacks to thousands of kids in the area

You can also submit an opinion to be featured on the site. 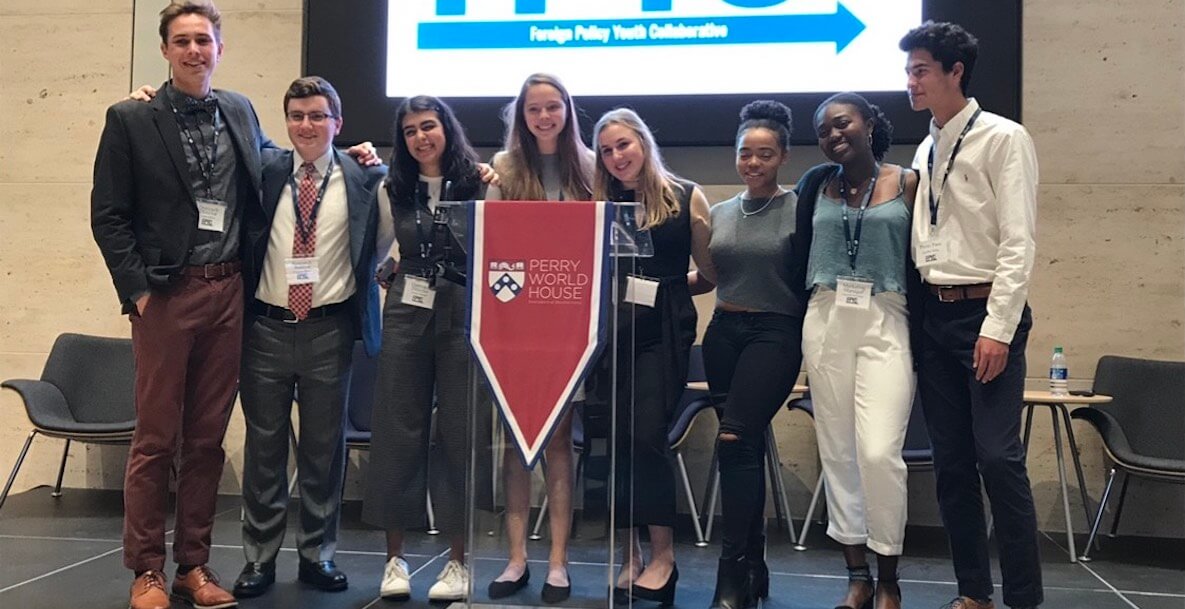 “You can’t live in a vacuum”

“You can’t live in a vacuum”

It was November of 2019, and Maayan Barsade, now 17, was waiting for the sleepover weekend to begin. The Lower Merion High School student, then a junior, could feel the nervous energy coursing through her.

“I kept worrying that no one would show up,” she says.

But this wasn’t to be a night of pranks and gossip, of midnight hijinx and sleeping ‘til noon. It was a gathering of a half-dozen students from around the country who were descending on Philly to join Barsade in announcing their mission: nothing short of, oh, healing the world.

Through its website, podcasts, and events, FPYC convenes teens of all ideological viewpoints who feel strongly about improving the world in which they live.

FPYC grew out of Barsade’s study abroad experience in Brussels. Unlike many other international programs—which can amount to lavish overseas teen tours—this one, CIEE, has historically provided significant enough scholarship funding to attract a more socioeconomically diverse cohort of teens.

Many of the young people in Barsade’s group of 23 had the experience of immigrating to U.S.; others, like Barsade, are first-generation Americans. Over the course of three weeks in Brussels, students met with members of the EU parliament and the UN, as well as leaders from various international organizations.

It was as the program was wrapping up that Barsade’s teacher, Katya Long-Ghanmi, implored her and her peers to create a vehicle to keep their lively discussions going.

A dozen or so students from the original group of 23 mulled it over, landing first on the idea of forming an election-focused group called “Get Ready,” with an emphasis on “education, motivation, and conversation;” but that didn’t feel aligned with the spirit of international affairs.

So the group continued to iterate, keeping the same three-pronged mission of education, motivation, and conversation but switching their lens to foreign policy, and rebranding themselves Foreign Policy Youth Collaborative.

“As a teen, there aren’t many places that want to listen to you. And it’s a really frustrating part of being young, because you have so many ideas and there’s just nowhere [for them]. So I thought, alright, let’s make this like a mini think tank,” Barsade explains.

The group decided to create a website featuring op-eds on a wide array of topics. On a recent Wednesday night, for example, headlines ranged from “Why the Voting Age Should Be Lowered to 16” to “Girl Brides Across The World.”

Sections include “Activism and Community,” “Diplomacy and Cooperation,” “Economic Globalization,” “Global Climate Change,” “Human Rights,” “Immigration and Refugees,” “Terrorism and Conflict,” and the catch-all “Worldwide Issues.” Articles are complemented with arresting photo-illustrations, and the refined aesthetic of the site rivals that of any “grownup” media outlet.

They launched with an event at Perry World House on Penn’s campus (Barsade’s mother is a professor at Wharton, hence the access to the venue), inviting family, friends, and leaders from foreign policy-focused groups in Philly like World Affairs Council of Philadelphia and Foreign Policy Research Institute to mingle and hear their presentation about the mission of FPYC.

The evening ended with the long-anticipated sleepover at Barsade’s home.

Since that launch, the group has evolved, adding a weekly podcast and working with many strategic partners: They cross-publish on International Policy Digest, sharing three op-eds a week from FPYC with IPD’s readers. They’re featured on the youth activism app TurnUp, which helps users find socially conscious organizations to engage with in their area. They’re working with the international youth nonprofit Climate Cardinals to translate all of their climate op-eds, and with another teen-led initiative, Project Engage, which creates content for elementary school students; FPYC is putting together an age-appropriate class about internationalism, and the importance of being involved culturally with other countries.

Among the many aspects of FPYC’s work that set it apart from other youth-driven political outlets: It’s totally nonpartisan.

“It’s a safe space and a safe environment,” Barsade says. “We emphasize in all of our orientation meetings that this is a nonpartisan organization that produces partisan content. And I think that that’s what makes us so unique, because you can look at our website and find so many viewpoints but, at the end of the day, we’re all friends.”

Mutual respect is key; if you’re not willing to collaborate, Barsade says, you shouldn’t be part of the organization.

That commitment to fairness has only boosted FPYC’s numbers, on all fronts. “This year has been absolutely insane,” Barsade says. They started with their team of 12; in February, they opened up applications for new volunteers and grew to 30 people by June.

Then, one of their TikToks went viral, and suddenly the team grew to 220 teens from around the country, volunteering within FPYC’s burgeoning departments: editorial, social media, fundraising, graphic design, marketing, and so on.

Their readership has also grown exponentially: They went from about 500 monthly readers to 10,000. They have about 3,000 followers on TikTok, more than 1,000 on Instagram.

Barsade says growth is not solely due to their viral hit.

“As we were expanding, so many new ideas were popping up, and our marketing team is also so amazing,” she says. “Their tactics really work: We produce a lot of infographics and they’re based on facts. So that’s, I think, why we get more reposts and republishes.”

They also have a staggering crop of mentors. There’s Anousheh Ansari, the Iranian-American astronaut, engineer, and entrepreneur. A friend of the family of Barsade’s co-CEO, Jordan Naddaf, Ansari meets with Barsade and Naddaf, a high school senior in New York City, about once a month, to strategize about running an organization.

There’s Anjali Kochar, executive director of Kailash Satyarthi Children’s Foundation of America. They met through Kochar’s work on anti-child-trafficking campaigns. Kochar expressed a passion for what the FPYC team was doing, then introduced FPYC to several other youth-led organizations with similar missions, and even invited Barsade, Naddaf, and FPYC secretary Olivia Lutz to the Laureates and Leaders Fair Share for Children Summit, which was held just a few weeks ago.

Closer to home, Foreign Policy Research Institute (FPRI), has been a source of support and encouragement.

“I thought this was a tremendous organization that they were building,”  says Eli S. Gilman, Vice President for Operations and Chief Operations Officer at FPRI. “I’ve been at FPRI for almost 12 years now and I’ve seen our organization grow and evolve and it was nice to see this young person coming with so many ideas and this fervor for foreign policy and doing it in a bipartisan, apolitical way, and just nurturing the next generation, in terms of foreign affairs and understanding our place in the world.”

He applauds the emphasis on getting out of our information silos. “It’s a great experience for people to be able to write, to be able to demonstrate their capability to express an opinion, and to listen to other people and to have an understanding of both sides. Because, really, you can’t live in a vacuum,” Gilman says. “If only the adults in the room would listen and have more platforms like this.” Gilman is eager to continue to mentor the FPYC team.

But finding mentors isn’t always easy, Barsade says, because of people’s skepticism. “A lot of people thought this was going to be another quote-unquote nonprofit that kids just start for college purposes. But if this was for college, trust me, I would not be spending as much time on it as I’m spending now,” says Barsade, who prioritizes wellness—sleep and exercise are a must—and is president of her school’s mock trial team, as well as a member of student council.

Still, it’s not uncommon for her to “take meetings” in-between classes. “I’ll be at my one friend’s house and we’ll be hanging out and then I’m like Sorry I gotta go into your room, I have a meeting to take. They don’t even think twice about it at this point. It’s a running joke, and my friends have been my number-one supporters,” Barsade says.

She also credits her parents with planting the seed of curiosity about the world within her in the first place.

“The 2016 election was a pivotal turning point that really got me interested in politics,” Barsade says. “I realized politics was more than just that boring dinner conversation.”

“Since neither of my parents are from the U.S., I’ve always been exposed to other cultures and other countries, and that sparked my interest in something broader than school,” she says. She dreams of traveling the world, living in different countries.

Of course, she says, “The 2016 election was a pivotal turning point that really got me interested in politics. I realized politics was more than just that boring dinner conversation.” She’s grateful for the civil discourse within her own family. “They’ll ask me a question and when I don’t know the answer to it, I figure instead of just sitting here, I’m gonna go research it.”

And it’s important to Barsade that as FPYC evolves, it continues to attract and maintain diverse students and voices; to that end, participation is and always will be free of any costs, which is why establishing its 501c3 status was so important. It’s enabled the group to apply for grants, which they’re aggressively doing, and to fundraise outside of their circle of family and friends.

Barsade wants her peers to know there are places like FPYC where their ideas can and will be taken seriously. And she has a message for politicians, too: