Got an idea for how to bring fresh young voters to the polls? Have a story to submit? Want to find out what you can do to amplify youth vote in your community?

Reality Check: Let the Teens Vote
In some towns, Americans as young as 16 can vote. WURD’s afternoon host asks: Why not here?
Ideas We Should Steal: More Young Voters
Districts around the country—including University City in Philly—saw a huge uptick in young voters during the midterms. Harnessing that citywide could sway elections
My First Vote
Philly retirees reflect on their “first time”
They Vote(d) That Jawn
Nearly 7,000 18-year-olds registered to vote between the primary and general elections this year. The bestselling author and Safe Kids Stories founder announces the winners of the Vote That Jawn contest, which helped to GOTV

Then, find out what you need to know about mail-in voting.

Check out Committee of 70’s tools to educate voters in this major election year: 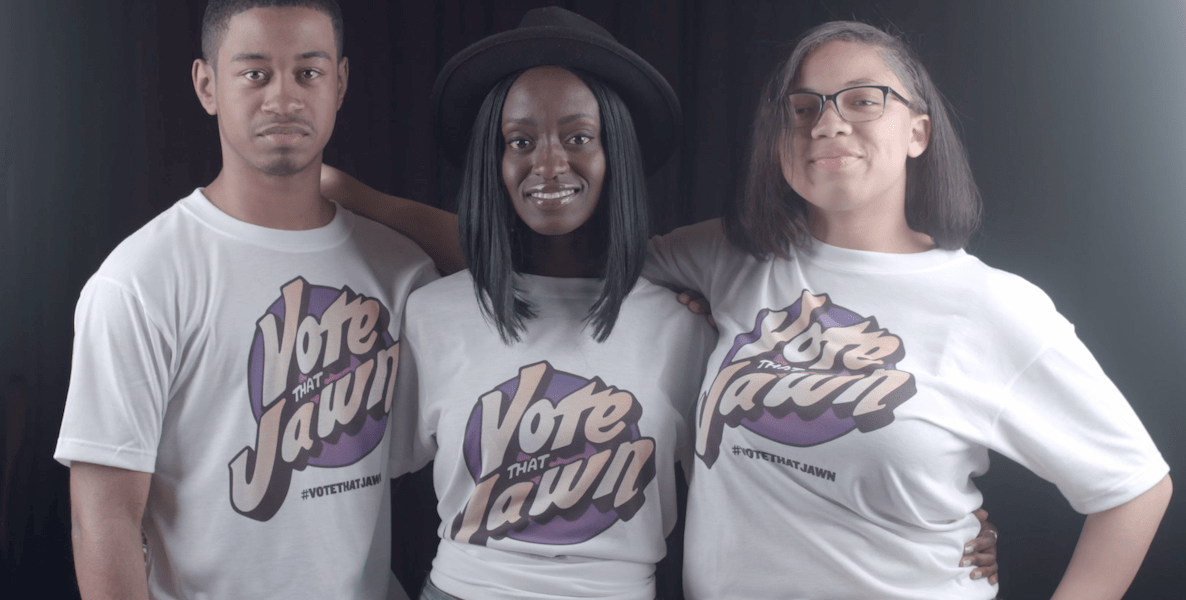 A group of Penn students, led by author/professor Lorene Cary, won’t let even a pandemic keep them from their mission: to register 10,000 first-time voters

A group of Penn students, led by author/professor Lorene Cary, won’t let even a pandemic keep them from their mission: to register 10,000 first-time voters

Think, for a moment, about the fanfare that comes with life’s milestones: marriage, birth, quinceañera, driving, graduation… and so on. The months and years of planning. The hard work. The crowdsourcing on social media! The fervent joy and celebration.

Now, imagine if the same attention was given to voting. Can you picture it, a real 76-trombones-and-a-big-parade-level excitement?

Cultivating that reverence for the act of voting is at the heart of #VoteThatJawn, the grassroots movement to engage first-time voters in Philly that, leading up to the midterm elections in 2018, successfully registered 7,000 youth.

In 2018, the nonpartisan group—spearheaded by author, playwright, Penn professor and Safe Kids Stories founder Lorene Cary—brought together educators, artists, community organizers and students to set off a registration phenomenon.

This year, the heart of the organization’s 2020 reboot is a diverse group of Penn students who share Cary’s commitment to elevating the act of voting to a rite of passage, and who are striving to register 10,000 more voters.

In light of Penn’s shortened semester and the Covid-19 crisis, they now plan to achieve their goal through virtual gatherings, social-media hoopla, music, writing, art, very groovy swag and so much more.

They’ve enlisted the help of partners around the city, like The Philadelphia Citizen, and Philly Youth Vote, UrbEd, SEAMAAC, When We All Vote, Hill-Freedman Music Group, and other youth- and community-facing groups to spread the word, create content and drive events.

“#VoteThatJawn should bring a youthful blush back to voting,” says Cary. “We are looking for them, calling them online to come into their civic adulthood.”

Samira Mehta, a pre-med junior from outside Dallas, says she didn’t realize how much she needed #VoteThatJawn until she discovered it on campus. Growing up in what has been called the most conservative urban county in the country, she was beside herself to be under 18 when the 2016 presidential election came around.

“I want Gen Z to understand how much their voice matters, how much strength there is in numbers, and how you can change the way that our country responds to things that matter to you,” Mehta says.

“I had a very different experience than a lot of people in Philadelphia. I’d walk into my high school and there’d be people wearing MAGA hats and Trump/Pence shirts, and there was widespread joy when Trump won. To not have had a voice in that election, I felt very powerless,” she says.

The daughter of immigrants, Mehta didn’t grow up in a family that spent a lot of time talking about the importance of voting.

Her mom was registered but didn’t vote, and her dad only voted intermittently, feeling his one vote didn’t count for much. Still, Mehta felt a pull to the polls, and the need for dialogue around it. It was when she arrived at Penn that she finally knew she wasn’t alone.

“I didn’t realize how weird the environment in my high school, where I was one of very few non-white students, really was, until I came to Penn, which is so diverse and attracts students from all over the world,” she says.

On the #VoteThatJawn team, she works on creating content for the blog and social media channels, with an emphasis on climate change. “I want Gen Z to understand how much their voice matters, how much strength there is in numbers, and how you can change the way that our country responds to things that matter to you,” Mehta says.

She’s particularly proud of #VoteThatJawn’s interpersonal approach, and the role of art and writing in the movement.

“We’re not just an organization that sets out a table and tries to register people to vote,” she says. “We work with schools and youth and we’re all about empowering youth to register each other to vote. Through art and writing, we’re trying to get youth to express why it’s important to vote, and that then becomes internalized on their end. And if you can tell other people why it’s important to vote, you become a lifetime voter.”

Related from The Philadelphia Citizen:
Ideas We Should Steal: More Young Voters
Districts around the country—including University City in Philly—saw a huge uptick in young voters during the midterms. Harnessing that citywide could sway elections

Carson Eckhard of Tampa, Florida, had a completely different political upbringing. Her mother worked on The Hill for a Democratic senator from Florida, and politics has always been a part of the dinner conversation. Fittingly, she and her twin sister were even born on Election Day.

In high school, Eckhard did advocacy work around reproductive justice and women’s issues, and here in Philly she also works in District Attorney Larry Krasner’s office on criminal justice reform.

“I’ve always seen political engagement and democracy as a key way to create a better world,” she says.

A junior English major, she, too, works on content creation, with a focus on criminal justice reform and an eye towards presenting information on issues that matter to youth in a nonpartisan way.

She’s also helping the team pivot from in-person events to virtual ones, and strategizing on how to enable people to get voting materials at home, if need be, in light of Covid-19.

“I joined #VoteThatJawn because I wished it had existed when I voted in my first election in high school,” she says. “I think sometimes people our age assume that everyone else has things covered. But it’s worth your time to take the two minutes it takes to register, it’s worth going to the polls and voting from home, it’s worth looking into the issues that you personally care about to figure out how you want to vote. Voting helps create the culture that you want to live in, and sitting that out is really detrimental.”

Tanner Probst, a junior in The Wharton School, credits the teachers he had back home in Fort Wayne, Indiana, with instilling in him the importance of being an engaged citizen.

He voted in the 2016 presidential election while studying AP government in high school. He joined the #VoteThatJawn team with the belief that his age makes him uniquely positioned to excite other young voters.

“My voice can be more influential to other young people now than if I was doing this in 10 or 20 years,” he says. And he’s inspired by #VoteThatJawn’s non-pushy approach. “A lot of other organizations push people to register so that they can vote for a specific issue, and I think that’s the wrong way to frame it. If we can just get people feeling empowered and like they can make their own informed decisions, that’s what I’m going for.”

Related from The Philadelphia Citizen:
Don’t Ask Permission
Just do what these young people say: #VoteThatJawn

For months Probst had been working on the planning of a March 25 #VoteThatJawn event that was, of course, canceled. Now, he’s back home in Indiana working on planning a virtual event for May, instead.

“In a way it’s been a neat opportunity,” he says. “Since we’re all kind of locked away with extra time, we’re able to accumulate more content, more blog posts and different things we can use in the coming months that we wouldn’t have been able to do if we were focused on event-planning.”

As for Mehta, of Texas, her passion for the #VoteThatJawn ethos has

been contagious not only among Philly youth, but in her own backyard: Both of her parents voted in the heated 2018 midterms and watched as Beto O’Rourke came so close to flipping her county blue.

“#VoteThatJawn changed my life and my parents’ lives, and they’re now lifetime voters,” she says. And it’s that power of connection that will ultimately fuel #VoteThatJawn’s success.

“We are showing them efforts that so many fabulous groups are making,” Cary says. “Becauses their lives, their voices, their vision, their energy, their hopes, their rage, their grief, their songs, their concerns, their lives are precious, each and every one. Each and every vote.”