Do you think we need a revival of the federal assault weapons ban? You can get the ball rolling by letting your elected officials know. Need a hand getting started? Check out our guide below:

To Reality Check on WURD

You can tune in to Reality Check and hear The Citizen at 6 pm every Tuesday.  Then, head back here to listen to past Reality Check episodes on CitizenCast:

Reality Check with Abbe Stern
Charles Ellison and Abbe Stern, hospitality manager at the Rittenhouse Hotel, discuss how she started a food rescue operation to bring restaurant excess to food banks and other organizations that could use it.
Reality Check with David Bradley, Founding Director of LiveConnections
Charles Ellison and David Bradley, Founding Director of LiveConnections, sit down to discuss the music program at Hill-Freedman World Academy. Its students recorded an album inspired by the Sound of Philadelphia (including a cover of "Wake Up Everybody").
Reality Check with Roxanne Patel Shepelavy
WURD's Charles Ellison and the Citizen's Executive Editor discuss Canada's plan to reduce poverty. 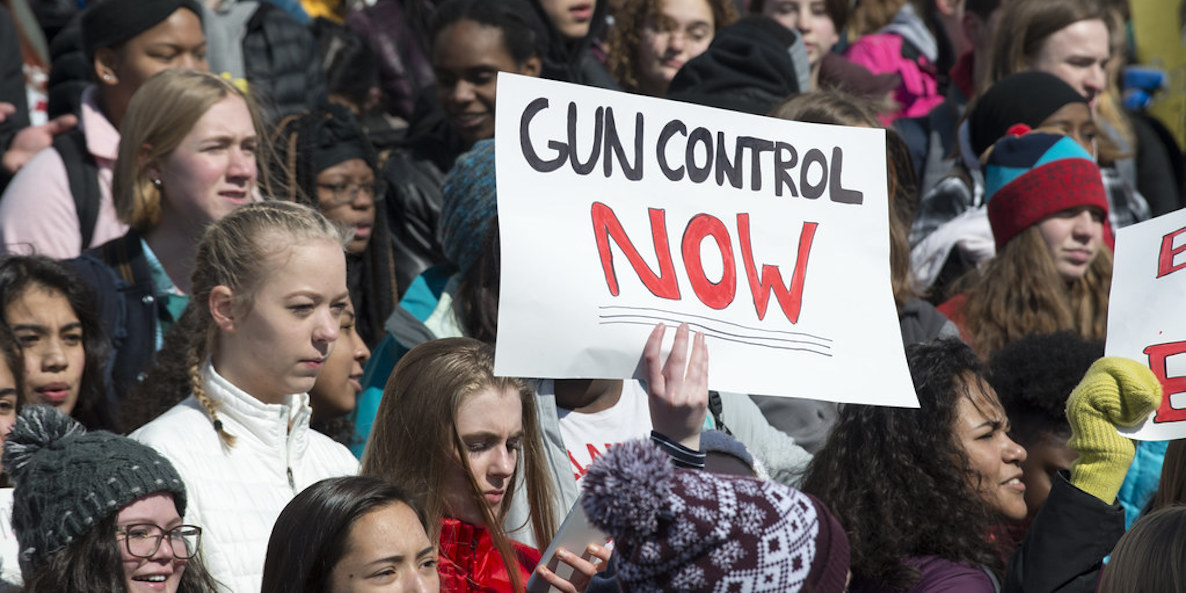 A ban on “battlefield weapons” could keep casualties from mass shootings down. That, WURD’s afternoon host contends, should be the sole message from gun control advocates

A ban on “battlefield weapons” could keep casualties from mass shootings down. That, WURD’s afternoon host contends, should be the sole message from gun control advocates

The aftermath of grisly mass shootings is much like the regurgitated fate of Tom Cruise’s character in the Edge of Tomorrow.  Live. Die. Repeat. It’s a non-stop wash and rinse cycle of the same useless conversation and debate. “Gun control” advocates keep losing the war much like the repeatedly destroyed human race in that 2014 anime-based cult classic.

And as a result, even as casualties from mass public shootings keep piling up, gun rights advocates—from gun makers to the NRA to the Republican Party to white nationalists parading as Proud Boy “militias”—keep winning the war over guns. We still can’t get any meaningful or effective anti-gun legislation passed and military grade weapons still roam public spaces in more frequent bursts of mass shootings. And, as bad as these mass shootings are, gun rights lobby folk are still able to maintain their industry and American-as-apple-pie status quo.

Part of the problem is that gun control advocacy, as well-intentioned or noble as that mission is, keeps setting the wrong expectations. Post mass-shooting discussion is too unrealistic, too altruistic and lacking pragmatism. It assumes we can seize the moment with enough collective moral shock to eradicate mass shootings overnight and that America, nauseated from the constant death of innocent civilians, will reach that point where it will happily give up its gun fetish.

Democratic presidential candidates are spending so much time in circular-firing squad mode and using Republican talking points against each other, that they could use to openly push for a revival of the federal assault weapons ban.

But, let’s be realistic. Americans will hold on to their guns for “protection” or for sport: Pennsylvania is one prime example where guns are a preferred high school graduation gift in some spots. If it’s one thing America loves to believe in, it’s a mythical Second Amendment right to bear arms that was, actually, designed primarily for militias. (Just read the Second Amendment).

Gun control advocates require a drastic change in their mindset and policy prescriptions, starting with an acknowledgment that gun culture is embedded in American DNA. So long as that’s the case, gun violence and the injuries or homicides that follow will continue being a mainstay of American culture.

We need a reset in the gun debate lexicon if we want any change to happen. Gun rights advocates have long been able to hold the line on the gun control conversation by persuaded gun enthusiasts and large portions of the American public that “Democrats and liberals” want to take everyone’s guns away, from handguns to hunting rifles. The impression is that gun control advocates, unhinged, will eradicate great American past times like hunting and skeet-shooting while severely downgrading a citizen’s ability to defend him or herself against home invasion and, yeah, mass shootings, too.

We see this in polling on the gun debate. A July NPR/PBS NewsHour/Marist poll showed 41 percent of Americans think a ban on the sale of semi-automatic assault guns, such as the AK-47 or the AR-15, is a bad idea—that’s not a majority, but it’s near half the population. Sizable pluralities of Americans, from 35 percent to 40 percent, oppose stricter gun laws, according to Quinnipiac University polling since the beginning of 2019. Pew research finds 42 percent of Americans have guns in their homes, and about 30 percent currently own a gun, while nearly 70 percent say they do so for “personal protection.” Almost half the American public say stricter gun laws would lead to “fewer mass shootings,” according to Pew, but just as many say “there would be no difference.”

Gun control advocates require a drastic change in their mindset and policy prescriptions, starting with an acknowledgment that gun culture is embedded in American DNA.

Gun control advocates are fighting a losing battle. Just days after El Paso and Dayton, which could be a crucial turning point in shifting the debate, many policymakers are going right back to relying on old rhetoric.  Unable to let go of pipe-dreaming “bipartisan” rhetoric, as an example, the U.S. Conference of Mayors puts out a letter co-signed by 214 mayors pushing for background checks. Yet, that just muddles the language. Calling it “bipartisan gun safety legislation” either gets it nowhere, implies you’re keeping guns safe (versus keeping, well, people safe) or merely dilutes the cause.

Instead, keep it simple and firm. Focus efforts where they can have some impact: The ban of “battlefield grade weapons and firearms.” Period. Nothing else. No sense in strengthening a background check if a motivated individual posing as a law-abiding citizen one day and then ending up as mass shooting white nationalist soldier the next can still get their hands on a battlefield rifle.

Hence, each time gun rights advocates spin that “Dems & libs” are about steal everyone’s guns, gun control advocates should message incessantly that they only want “battlefield weapons” off the civilian shelf. No more, no less. Let’s get that done, and we’ll cross the soft-policy of background checks later. If gun owners and gun enthusiasts want to keep their handguns and old-school hunting rifles, have at it. But, call the gun advocates’ bluff on this topic: If you need need an AR-15 or an AK-47 to kill a deer, rabbit or duck, you really can’t hunt. So, what’s the real purpose?

But, here’s the funny thing: It’s not like we haven’t done this before.

It’s one of the primary reasons the infamous 1994 Crime Bill passed. How soon we forget. Lawmakers inserted a powerful federal assault weapons ban as a subsection in that same bill. Yet, as Republicans finally retook control of Congress around that same time, policymakers allowed that ban to expire without a 10-year renewal in 2004. Consequently, mass shootings, spiked 183 percent between 2004 and 2014, according to research from the University of Massachusetts-Boston, which means perhaps the ban was doing something right.

Here’s the funny thing: It’s not like we haven’t done this before.

Indeed, it is confounding that the 1994 Crime Bill author himself, Joe Biden, failed to bring this up while fending off a non-stop months-long barrage of criticism for the law’s hyper-incarcerating consequences. Of course, recently, in the wake of these shootings, now he’s talking about it. Other Democratic candidates have, as of the most recent debates, wasted untold energy dogging Biden and slamming Obama’s legacy—while being jerked around by ratings-hungry debate anchors—that they missed bringing up epidemic levels of mass shootings that have occurred over the years, and the national security threat that poses. Instead, the political zeitgeist waits for the tragedy to happen before the topic ever comes up again.