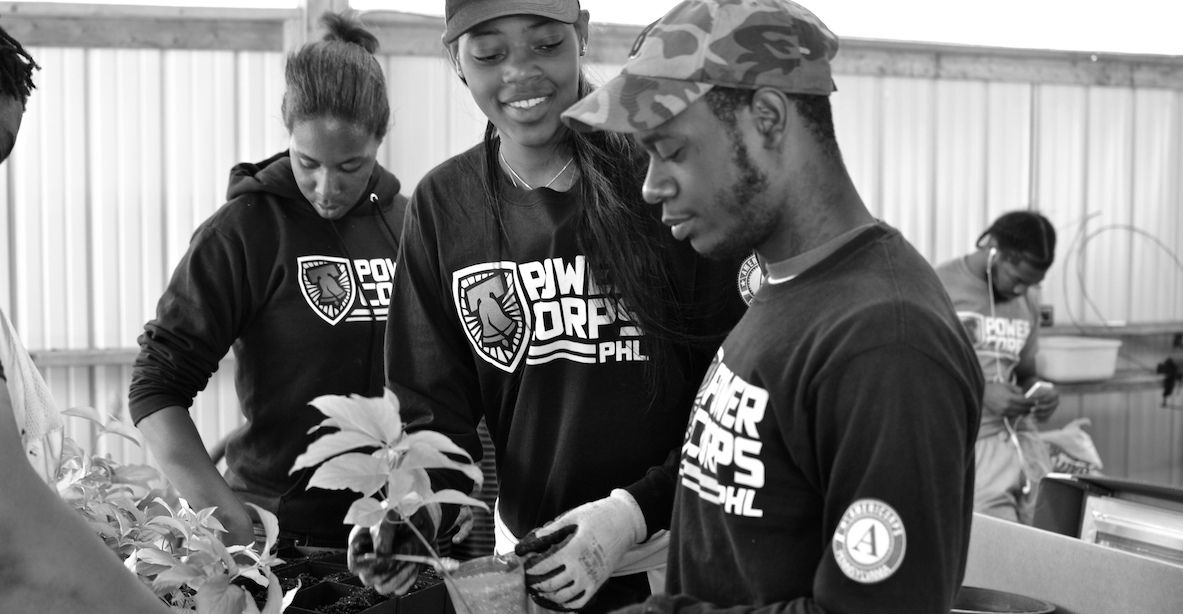 Episode four of The Philadelphia Citizen’s podcast exploring stories and solutions from the front lines of Philly’s gun violence epidemic looks at the power of meaningful jobs in curbing violence.

Episode four of The Philadelphia Citizen’s podcast exploring stories and solutions from the front lines of Philly’s gun violence epidemic looks at the power of meaningful jobs in curbing violence.

The reality is that poverty and a lack of jobs leads to desperation; desperation can lead to gun violence.

Over the course of our reporting, we heard this over and over again. A key part of driving down gun violence is increasing job opportunities.

We meet Julia Hillengas, the co-founder and executive director of PowerCorpsPHL, which provides paid training and work experience for Philadelphians ages 18 to 26 who often come from troubled backgrounds or who have been involved with the criminal justice system. Whereas the recidivism rate in Philadelphia is 50 percent, the recidivism rate for PowerCorpsPHL participants was 8 percent; and when the organization raised pay by $3 per hour, that rate dropped to 3 percent.

We also learn about the work of a program called CRED in Chicago, led by former Secretary of Education Arne Duncan. In 2015, when Arne Duncan moved back to Chicago after serving as President Obama’s education secretary, he set out on a listening tour of shooters. He asked the same question over and over to dozens of young, mostly African-American, men: How much money would it take for you to put down the guns?

At first, he didn’t believe the answer because it seemed to contradict everything he had heard about the illicit dealings on street corners that often led to violence. For a legal job paying just $12 or $13 an hour—less than Chicago’s $14/hour minimum wage—the men said they would put down their guns and turn away from the life they’d been leading.

Both programs point to the fact that progress can be made.

“I truly believe that no human being innately wants to take another life,” Hillengas says. “They are doing it because either their survival depends on it, or they truly believe that if they don’t do that, there’s nothing else for them in this life.”

Contact city officials and tell them to invest in data-backed solutions and meaningful, well-paying jobs that work to curb violence. Here are the best people to reach out to, with links to contact information.

Special thanks to our associate producer Nadira Goffe. We used a news clip in this episode about the DA’s job and resource hub from KYW newsradio. Thank you to Adrian, Julia and Kalef from Powercorps. And, special thanks to Spring Point Partners for funding this project.