To find more information about the rally, type in Main Line Motor Rally on Facebook and Instagram. There are plenty of ways to contact the rally through social media, and Glew responds quickly to all inquiries.

Main Line Motor Rally holds a couple of events each year, so keep an eye on their social media pages for announcements. They’re always looking for new drivers, especially women.

“If you’re cooking or cleaning or driving somewhere, just pop one on and listen really quickly,” Glew says. “I think everyone can benefit from the information that’s on there no matter who you are.”

Make a donation of any amount to raise money for RAINN, the Rape, Abuse & Incest National Network, the nation’s largest anti-sexual violence organization.

Support Women Against Abuse—check out their resources for learning about domestic abuse; find out how you can take action or get help; and donate.

Locally, the Philadelphia Center Against Sexual Violence provides free counseling for victims; offers education and awareness programs for kids, college students and staff, and professionals; engages Philly youth through Teen WOARRIOR; trains staff at Philly bars to appropriately respond to sexual harassment through their Safe Bars program and so much more. Donate to support their critical work. 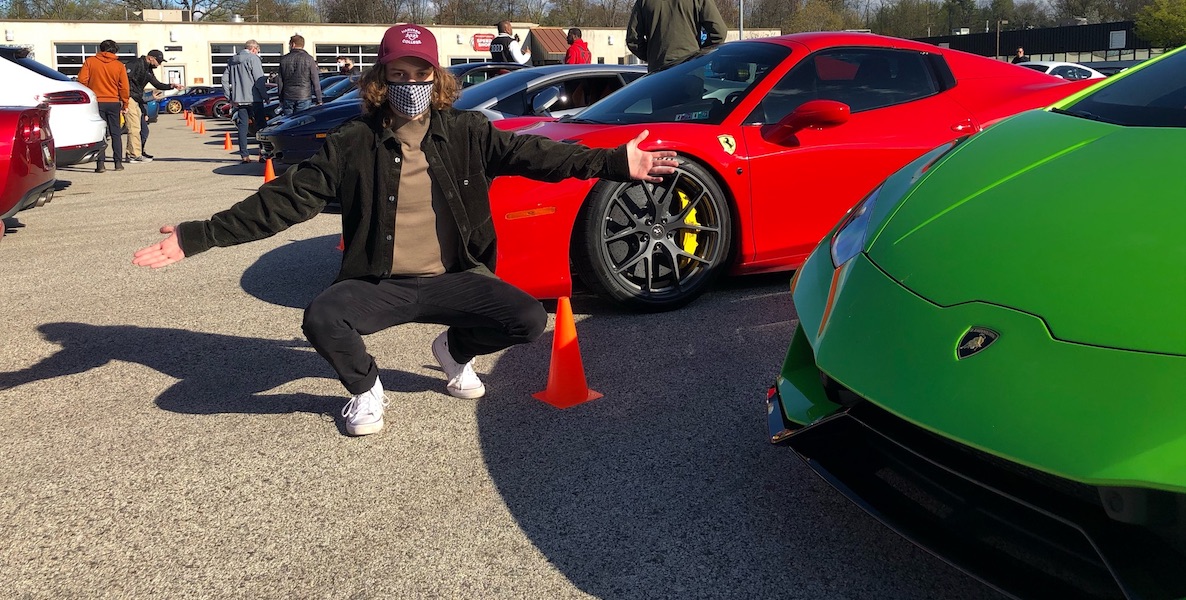 Early into his high school career, one of Finn Glew’s closest friends shared with him that she had been sexually harassed as a ninth grader at a party. She was barely out of middle school and dealt with this trauma without anyone knowing.

MORE ON THE FIGHT FOR WOMEN’S RIGHTS

After hearing about it, Glew says he first kind of went into a state of shock. “As a teenage boy, my only exposure to that type of thing was through very limited sex ed [class]. Hearing from friends firsthand was a whole perspective shift,” he says.

With his new point of view, Glew was inspired to take action. He talked further to his friends about their experiences with harassment; but more importantly, he listened. And he began conducting his own research about sexual abuse and toxic masculinity so that he could better empathize with the women in his life.

Putting in the work

Every 68 seconds another American is sexually assaulted, and 1 out of every 6 American women has been the victim of an attempted or completed rape in her lifetime. “I think everyone has a connection to [sexual abuse], and that’s what makes it so scary,” Glew says.

With his awakening came a deep sense of guilt. “It took me 15 or 16 or 17 years to realize what my female friends go through all the time,” Glew says. “It might sound kind of clichéd, but it made me realize how big of a disconnect there is between girls and boys on these types of issues, and just how little it gets talked about.”

“Men have daughters or wives, so it just takes a little bit to help them see what you’re doing,” Glew says. “I think if you have a good cause and you believe in it, then other people will too.”

So Glew decided to turn his research into a school project via Harriton’s International Baccalaureate (IB) program, through which high school students earn college credits by pursuing an advanced curriculum with rigorous standards. He investigated the prevalence of sexual assault and harassment among minors using qualitative interviews, and began to grasp the depth of this issue.

“Unfortunately, the more you dive into this project, the more you’re gonna get a miserable feeling about the way the world is because there’s just so much data on the high rates of sexual harassment and assault,” he said.

He decided to marry his newfound commitment to the issue with his longtime passion for cars, which had begun at a very young age. “From the first time I went to a car show with my family in the summer when I was little, I was hooked.”

As timing would have it, the summer before his senior year of high school, Glew was at his local Whole Foods when he spotted a couple of Ferraris in the parking lot. A light bulb went off, and the Main Line Motor Rally was born.

What is the Main Line Motor Rally?

The Main Line Motor Rally is a charity event in the greater Philadelphia area where car enthusiasts meet up with their vehicles—Ferraris, Lamborginis, Porches, you name it—and then drive through the suburbs and rural areas of Pennsylvania together. The rally ends at the Simeone Foundation Automotive Museum, where the drivers get to watch a private demo of a classic race car. While there is no set registration fee for the rally, Glew requires drivers to make a donation of any amount to raise money for RAINN, the Rape, Abuse & Incest National Network, the nation’s largest anti-sexual violence organization.

To date, they have helped 3.5 million survivors and their family members. The organization runs a nationwide sexual assault hotline, and organizes programs to prevent sexual violence, to support survivors and to ensure that perpetrators face proper repercussions by improving sexual assault laws and policies. Donations allow the nonprofit to operate all of these efforts.

Over the course of two rallies—one held last September, the other this past April—Glew has raised more than $15,000 for RAINN. The next rally will take place on July 31.

“Now I’m really confident in the kindness of strangers”

“It’s always way more work than you think it’s gonna be,” Glew says, but he loves planning events and problem-solving. The first rally was smack dab in the middle of the Covid-19 pandemic. Since he couldn’t go door-to-door seeking participants and donations during quarantine, he instead scoured the local car scene online for people who posted photos of cool cars, and contacted them through Facebook and Instagram.

He was astounded by the response he witnessed.

Glew received a lot of support from random strangers, who not only signed up for the event, but also began sharing his social media posts and telling friends about the rally. “I’m really confident in the kindness of strangers now, after going through this,” he says.

“It took me 15 or 16 or 17 years to realize what my female friends go through all the time,” Glew says. “It might sound kind of cliched, but it made me realize how big of a disconnect there is between girls and boys on these types of issues, and just how little it gets talked about.”

Fundraising for the Main Line Motor Rally has skyrocketed due to word of mouth: The first event featured 20 cars; the second, more than 80.

The connection between the car community and sexual assault and harassment awareness could seem, at first, an odd pairing. The car scene is male-dominated, after all. But that seeming disconnect is perhaps what’s so powerful about the event—to see men standing up for an issue that largely plagues girls and women. Throughout the event’s run, Glew has been sharing important information about sexual assault and harassment with a group of men who may have been previously unaware of these issues.

“Men have daughters or wives, so it just takes a little bit to help them see what you’re doing,” he says. “I think if you have a good cause and you believe in it, then other people will too.”

Glew doesn’t want his work to end with the rally; he hopes it also expands what’s taught in sex ed about sexual assault and harassment. Out of this desire to see a shift in sex ed, Glew created the “Drive and Talk Show,” an Instagram video series, kind of like a podcast.

For years, the ol’ “tea” metaphor has been a staple of sex ed. Students nationwide are shown a cheeky video demonstrating that if someone doesn’t want tea, then you shouldn’t try to give them tea; likewise, if someone is asleep, then you shouldn’t try to make them drink tea. The metaphor, of course, is that the same logic should also be applied to sexual advances. However, the tea metaphor is oversimplified and difficult to apply to real life situations.

A post shared by The Drive and Talk Show (@driveandtalk.show)

“When someone’s at a party and things are heating up, no one’s gonna be thinking about tea,” Glew says. “There’s a lot of insecurity involved, a lot of pressures involved. There’s so much social currency connected with the idea of sex, that the difference between right and wrong can get lost in that.”

He believes that sex ed needs a more personal, conversational touch to tackle these complex situations. At the end of the day, it’s about empathy, and putting yourself in someone else’s shoes. “I think that there’s just a big disconnect between words on a page—no means no, yes means yes—and the actual situational learning,” he said. “Sex ed needs a refresh.”

Each episode of “Drive and Talk Show” features Glew talking for just two to three minutes about topics like consent, coercion, double standards, and other issues that women and girls regularly face. Glew has been able to incorporate his love of cars into this project as well: He compresses the information for each topic into a segment that he can memorize and film in his own car. “I think better when I’m in the car and I have a window to look out of,” he says.

By creating an open discussion about sexual assault and harassment, Glew hopes that he can help to destigmatize these issues. “I mean it’s still taboo to talk about  it,” he says.

According to Erinn Robinson, RAINN’s press secretary, there are many common misconceptions about sexual violence. Many people believe that sexual assault is usually perpetrated by a stranger, but in reality, eight out of 10 victims knew the perpetrator. People also often assume that all perpetrators are men and that police officers are always helpful to sexual assault victims, but neither of these are the case.

“Educating the public on the realities of sexual violence, including the scope of the problem, the impact for survivors, and so on will lead to better conversations around this issue area and lead to conversations that are more trauma-informed and survivor-focused,” Robinson says.

Glew is creating a space for these conversations. He wants his show to educate people about these issues so that everyone can be more aware of the prevalence of sexual assault and harassment in our society. “It’s a negative cycle that I’d love to try to break.”

As he prepares to head off to Harvard this fall, Glew plans to ramp up the Drive and Talk Show, and hopes to research sexual assault and harassment further on campus. He also plans to continue working on the Main Line Motor Rally during his breaks so that he can still have at least two events per year.

He has one final, important message for young men trying to change toxic teen stereotypes in 2021. “To the boys specifically, there’s a lot that your mothers, your aunts, your sisters, your girlfriends, your female friends, there’s a lot that they experience that you don’t understand,” he says. “And it would help everyone if we all became more open to the idea that we have something to learn and that we can always do better, especially when it comes to things like sex.”