Tell City Hall to talk back

“Philly, particularly through the mayor, can position itself as being right on the front line fighting against Trump and Republicans on education, on pollution and the climate, on guns and other key quality of life issues.

Philly can serve as a relevant last-stand microcosm of what’s happening everywhere, a way to clearly illustrate the deep, destructive policy and regulatory schemes and reversals the Trump administration has carried out.”

Reality Check: Black History Month Isn’t Working
It was supposed to be a way to make black people equal and free of the legacies of racism. Instead, WURD’s midday radio host contends, it’s little more than a “cultural birthday party”
Reality Check: Let’s Rethink Our School Board
Without pay or accountability to citizens, this WURD host wonders, how can we really expect school board members to solve what ails the struggling system?
Reality Check: Not All Speed Cameras Are Created Equal
The City installed speed cameras along a deadly stretch of Roosevelt Boulevard this week. Is it Black and Brown Philadelphians, WURD’s afternoon host wonders, who will pay for them?
Reality Check: Philly Schools Are Like a Slow-Moving Asteroid
Philly schools are toxic, underperforming and mismanaged. When, WURD’s afternoon host wonders, is someone going to take responsibility?
Reality Check: Walking the Talk on Clean Energy
In Chicago and D.C., residents and government came together to close polluting plants in their community. In Philly, City Hall won’t even take real action on the PES Refinery site

On the go? Prefer to listen to this story?
CitizenCast is here for you 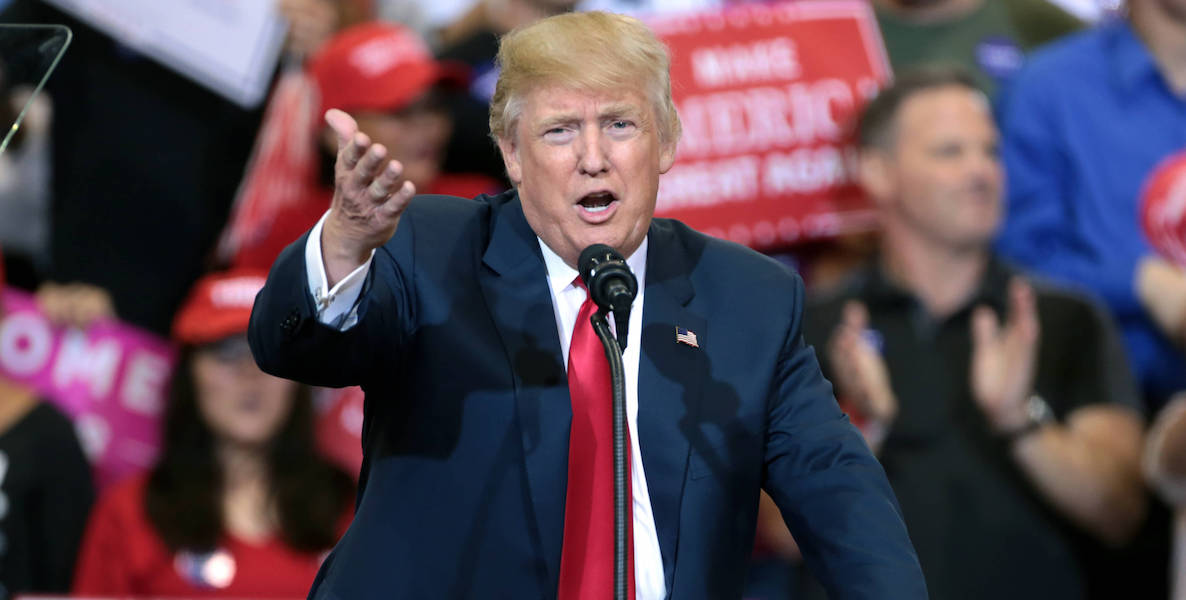 It’s too bad, WURD’s midday host contends, that the city can’t see that

It’s too bad, WURD’s midday host contends, that the city can’t see that

We already know that Pennsylvania is key to President Trump’s re-election chances in 2020, being just as important now as it was in 2016. What else explains the constant rally runs through Trump Valley?

But what we seem to be missing is how much Republicans view Philly as central to that effort, a strategic reality Philadelphia itself seems woefully unprepared for.

It’s not that the President expects to win Philly, with its overwhelming Democratic advantage; he doesn’t need to. In 2016, Trump got around 50,000 more votes in Pennsylvania than Hillary Clinton—a reflection in part of poorer turnout in Philadelphia than in past elections.

That is the story around America: A Pew research center study found that 19 percent of the registered black voters—and 25 percent of Hispanic voters—who didn’t cast a ballot in 2016 said they disliked the candidates or their campaign issues; in both cases that was 16 percent more than in 2012.

Related from The Philadelphia Citizen:
Will Philly votes swing the state?
Philadelphia contains 20 percent of the state’s voters. An urban demographer charts what that means for the Presidential primary on April 28

These are the voters Ibram X. Kendi dubbed “the other swing voters”—those who either vote Democrat or stay home—in a recent Atlantic magazine article that he based largely in Philly. It explains why Philly has, unwittingly, become ground zero for Trump’s battle for the premier battleground state.

Several key issues, including schools, crime and energy, will be twisted, contorted and leveraged in the process, all of them currently presenting major challenges or perplexing city leaders.

Philly’s failure to address, respond to or effectively message on these problems will only help President Trump win the Keystone State yet again in 2020.

Last week’s State of the Union address was a sample of that strategy: Pres. Trump’s vivid use of Philadelphia 4th grader Janiyah Davis as political prop was diabolically brilliant. The narrative of promising black girl trapped inside a “failing government school” caught fire—even though, actually, Davis attends one of Philly’s star charter schools.

Those chords struck at a particularly inconvenient time for an embattled Philadelphia school district. Not only is the district faced with carcinogenic-laced school buildings shutting down every month, but it has yet to dramatically reverse course on generally poor academic performance or figure out how to resolve an adult illiteracy crisis that feeds the city’s high poverty rates.

The optical damage of a fledgling Democratic-run city school system already provides enough political ammunition for Trump Republicans to trigger questions around the competence of Democrats.

The problem for Democrats, in Philly and beyond, is that it’s largely true: the city

school system is a mess. City Hall is in a state of paralysis on getting around to fix it. It’s still an unresolved crisis.

It’s not that the president cares about that crisis or has any interest in fixing it. But he does care about winning Pennsylvania again.

Philly officials also need to figure out and implement solutions to our violence problem.

With the national discourse gradually steering away from “bi-partisan” interest in “criminal justice reforms,” we are starting to see signs of an impending “tough on crime” election as homicides reach record highs in big cities, especially Philly where (as of this date) the murder rate is nearly 30 percent above where it was this same time last year.

Related from The Philadelphia Citizen:
The Economic Case for Fixing Our Murder Problem
City Controller Rebecca Rhynhart’s new report on the economic impact of homicide proposes a proven path to reduce murders that will also increase tax revenue. Here, she talks about what comes next

Should that continue to rise—and worsen as we head into more active spring and summer months—look to colorful commentary and tweets from the president on the state of violence in Philadelphia, similar to prior comments on cities like Chicago and Baltimore. Look also to many frustrated and anxious residents taking it out on city officials and Democrats … by either not voting for the Democrat or not feeling motivated to vote at all because of a perception that it hasn’t fixed that violence problem, or any other problem for that matter.

City Hall will need to do more than dance in a prolonged honeymoon with its new black female police chief … and the new police chief will need to set a much more immediate and urgent tone that restores public confidence in her department’s ability to drastically reduce (and solve) homicides.

Leaving the crime issue unresolved, like the schools problem, opens Philly up to more blistering national-level critique from a president that has Pennsylvania in his electoral targeting scope.

It’s yet another issue to depress a city already plagued by low voter turnout.

On energy demand and environmental justice, the Trump White House has masterfully envisioned another key to an Electoral College rout in Pennsylvania.

That’s why we’re seeing a sudden interest in the future of the still-closed Philadelphia Energy Solutions refinery in South Philly. Just when everyone believed that issue was settled and that it wouldn’t re-open as a natural gas production facility, in steps the Trump administration imposing its sinister climate-hoaxing perspective as the fossil fuel lobby sought an intervention.

The optics of a fledgling Democratic-run city school system already provides enough political ammunition for Trump Republicans to trigger questions around the competence of Democrats.

“Look, these are great jobs for Philly,” Trump administration trade and manufacturing senior advisor Peter Navarro told the Inquirer recently. “This is a way to advance the energy-policy agenda, the economic-policy agenda, and the national-security agenda. So we’d love to see that remain as a refinery.”

That’s really about pitting white suburban, exurban and rural Pennsylvania voters against Philly, or motivating “white working to middle income” voters to the polls in 2020—especially the type most likely to get a PES refinery site job. The (mostly) black people who’ve lived around that site for generations, meanwhile, will continue to breathe in some of the most toxic air in Philly..

The energy versus environment issue, we’re finding, is a resonant one in the Commonwealth as no one has quite yet figured out a way to plainspokenly make a convincing case that greater environmental stewardship and a clean energy economy actually expands the economy and grows more jobs.

Instead, polling shows topics such as natural gas and fracking may pose a problem for Democrats as a slim majority of Pennsylvania voters (at least, in a recent Franklin and Marshall poll) support natural gas extraction and an increasing number are under the impression “economic benefits outweigh the environmental costs.”

Related from The Philadelphia Citizen:
Reality Check: Philly Schools Are Like a Slow-Moving Asteroid
Philly schools are toxic, underperforming and mismanaged. When, WURD’s afternoon host wonders, is someone going to take responsibility?

Other issues such as the city’s planned lawsuit against the Commonwealth on guns and Philly’s persistent identification as a “sanctuary city” will also serve as volatile wedge issues Trump will look to exploit.

City Hall will need to navigate that carefully: The immigration issue is being used to some effect to antagonize black voters against migrant-friendly Democrats and the gun lawsuit could become an opportunity for Republicans to paint Philly as an example of “big city liberals taking away your Second Amendment rights.”

Mayor Kenney, who regularly loves to sound off on just how horrible Trump is, could actually use 2020 as an opportunity to flex back with strong counter-messaging and crisis response.

The sooner he shows decisive and dramatic action on the schools, and creating a thoughtful national debate on K-12 to hammer Trump on (“hey, Mr. President: you’re talking about our failing government schools while proposing an 8-percent cut in education spending”) is the more likely he could mobilize Philly-area voters against Trump in 2020.

Look to colorful commentary and tweets from the president on the state of violence in Philadelphia, similar to prior comments on cities like Chicago and Baltimore.

A strong counter play here is for Philly, particularly through the mayor, to position itself as being right on the front line fighting against Trump and Republicans on education, on pollution and the climate, on guns and other key quality of life issues.

Philly can serve as a relevant last-stand microcosm of what’s happening everywhere, a way to clearly illustrate the deep, destructive policy and regulatory schemes and reversals the Trump administration has carried out.

It could be a rallying moment which gives the city the civic boost it needs. This could be a national opportunity for Philly to help Trump lose Pennsylvania…and save the world.

Now if only City Hall would rise to the occasion.