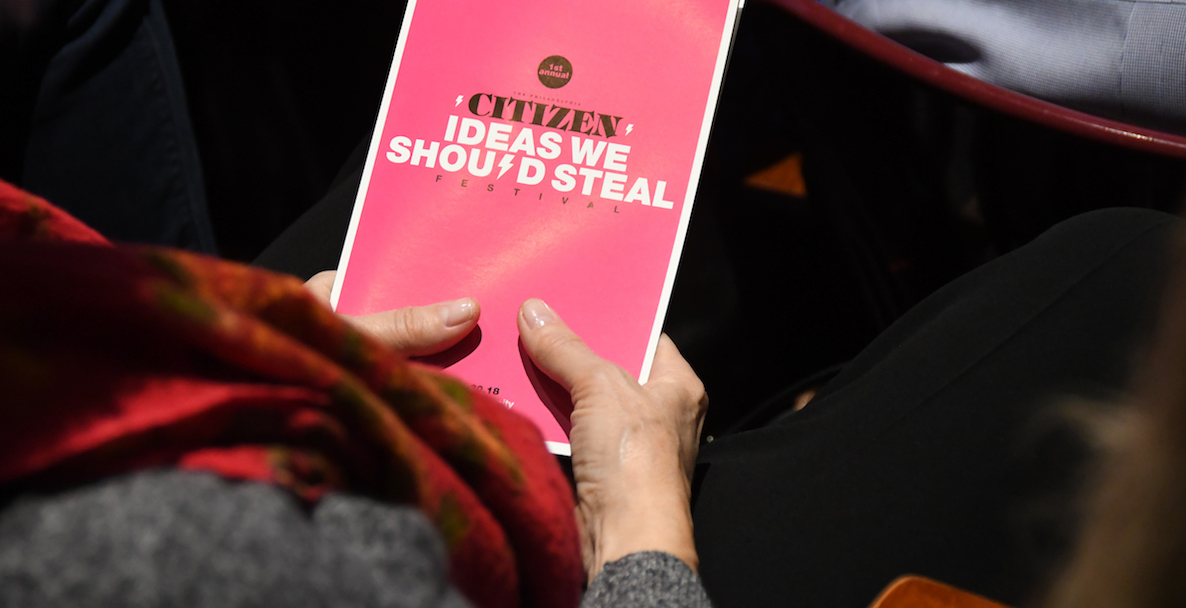 Miss the event? Catch up on video, audio and ideas from The Citizen's inaugural festival here. And don't forget to vote!

Miss the event? Catch up on video, audio and ideas from The Citizen's inaugural festival here. And don't forget to vote!

We started the day with the art of political compromise (courtesy of Colorado Governor John Hickenlooper and former New Jersey Governor Christine Todd Whitman). And ended it with hope and understanding (via the Reverends Michael Eric Dyson, Chuck Mingo and Bill Golderer).

In between, the 400-plus guests at The Citizen’s inaugural Ideas We Should Steal Festival heard more than a dozen ideas for solving urban problems from 26 speakers and panelists in answer to the perennial question: How can we make Philadelphia the best it can be?

Find all the video, audio, and more from the festival here.

Held at Drexel University’s Mandell Theater, the panels and rapid fire talks culminated in a list of 14 ideas, one of which we’ll award $50,000 to bring to Philly in 2019, for the first Jeremy Nowak Urban Innovation Award, sponsored by Spring Point Partners. The sold out crowd cast their votes for the ideas starting on Friday; voting will remain open for the next two weeks.

Didn’t make it to the festival? Need a refresher on the ideas before you rate them? Check out each session below where you can listen or watch to learn more about all the ideas you could bring to Philly.

After a rousing opening from MSNBC host Ali Velshi, we heard from Hickenlooper and Whitman, on how they have worked across the aisle to promote the good of their states. Hickenlooper also offered two ideas to steal: Open Primary Voting, and Mail-in Voting. Whitman talked about her work to bring high speed rail to the Northeast. (Rate the ideas here.)

We heard about how bicycling and storytelling can build communities from Detroit’s Cornetta Lane, whose Pedal to Porch is an idea we could bring here. (Rate her idea here.)

New America’s Afua Bruce showed how technology can fight the opioid crisis, as well as solve other urban problems—if technologists and problem-solvers sit at the same table. (Rate her idea to map the opioid crisis here.)

Author Anand Giridharadas and Facebook co-founder Chris Hughes talked to Velshi about the imperative to overcome income inequality in America, with Hughes touting his idea for a guaranteed income for some. (Rate that idea here.)

This year’s Philadelphia Aspen Challenge winners, Bartram High School, introduced “Give Us Our Crowns,” that highlighted the school to prison pipeline in Southwest Philly. Their project, which involved 1,000 origami cranes, captivated their neighborhood last spring—and the Drexel audience on Friday. (Rate their idea here.)

NYU Professor Eric Klinenberg, author of Palaces for the People, Palaces for the People: How Social Infrastructure Can Help Fight Inequality, made the case for better public spaces in the city, like libraries and parks, as a way to create stronger and healthier communities. And he highlighted a Philly program as an example: A joint project of Penn researchers and the Pennsylvania Horticulture Society to green up empty lots in North Philly led to reduced crime and mental health issues. (Rate his idea here.)

Equitable development advocate Cat Goughnour, from Portland—America’s most gentrified city—argued for a new approach to building neighborhoods that considers first the needs of existing residents. It is, Goughnour said, the best way to preserve communities, for the good health of everyone in them. (Rate her idea here.)

From Nepal to Mali to South Africa, Cheri-Leigh Erasmus has helped developing countries find and celebrate the best, most honest and most responsible civil servants, through nationwide American Idol-style competitions. Erasmus introduced Integrity Idol, now in seven countries, that is turning honest civil servants into celebrities. Now it’s building a new generation of active citizens—who want to work for the good of their communities, not just themselves. (Rate the idea here.)

Steven F. Wilson allowed audience members to see a day in the life at Brooklyn’s Ascend Charter Schools, where students are encouraged to explore, learn and fail positively. Wilson, Ascend’s CEO/Founder, described his school’s journey from “No Excuses” to a relationship-first model that has proven that academic achievement, even for underprivileged students can begin and end with the most basic building blocks of learning: Curiosity and joy. (Rate his idea here.)

The day ended with faith and irreverence from Dyson, Mingo and Golderer, whose final session, “Faith, the Racial Divide and Building Community” charged the audience to believe in love, to build community and to develop understanding among all people, and to—above all else—hope. As Dyson rousingly put it, “Hope is a resonate possibility in the midst of impossibilities.” (Rate Mingo’s idea for UNDIVIDED, a six-week racial reconciliation program, here.)

Looking to rate ideas? Click here! Remember you can—and should—rate all of the ideas from one to five lightning bolts. Then, send it along to friends to help bring one of these urban solutions to Philadelphia.