Vote and get out the vote!

Better Civics: The Real Truth About Voter Apathy
It’s not that people don’t care, the founders of a new civic engagement nonprofit contend. It’s that our electoral system continuously puts up barriers to voting. Here’s what we all can do about it
Voting Drop Boxes Live!
A Thursday night state Supreme Court ruling protects voting rights heading into the November election. Philly 3.0’s engagement director explains why that matters.
Power The Polls
The city needs to recruit another 4,000 people to work the polls to ensure voting goes smoothly on November 3. Here’s why it matters—and some ways we can prevent this last minute scramble in the future
The Citizen Voter Guide: PA General Election 2020
Election Day is officially November 3—but now is the time to get ready to vote. Here, everything you need to know to cast a ballot
Philly’s Doomsday Election Night Scenario
A longtime political mad genius has an answer to Trump’s challenge to the legitimacy of November’s election. Oh yeah, and he just got out of prison.
Reality Check: We Must Save the Election
WURD’s midday host warns that coronavirus-inspired primary delays could lead to voter suppression and a win for Trump in November—unless we take action now
Can Vote-by-Mail Save the Election?
The coronavirus is likely to upend the April 28 primary. That's why Philly 3.0’s engagement director doubles down on his call for mail-in voting
One-Stop Shop Voting
Early satellite polling stations could allow for same-day registration and voting starting in September—and, Philly 3.0’s engagement director notes, they’ll bypass the beleaguered USPS
Vote Early. Be Counted.
City officials warn of more delays in counting votes in November. Philly 3.0’s engagement director seconds their advice: Mail in your ballots a week ahead.
Will the legislature turn blue in 2020?
With Joe Biden leading in the polls, Philly 3.0’s engagement editor says, it just may be possible

Share these fun voting memes on your social channels

We love these original memes by Caroline Tiger, a committee person in the 2nd Ward. Download them and share them on your own social channels to keep your friends and followers informed. 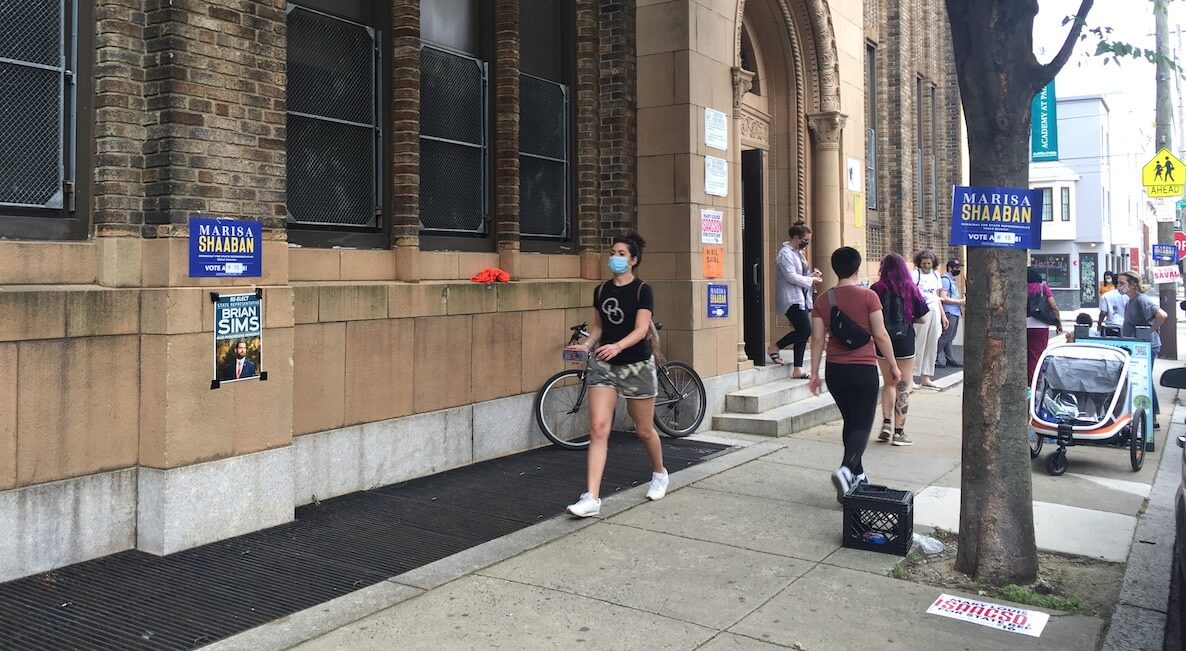 Get Ready to Start Voting

The City announced the first seven satellite election offices will open on September 29. Philly 3.0’s engagement director has the latest on what we know about voting in the upcoming election.

Get Ready to Start Voting

The City announced the first seven satellite election offices will open on September 29. Philly 3.0’s engagement director has the latest on what we know about voting in the upcoming election.

You can start voting in-person on Tuesday, September 29! In an announcement on Wednesday, Commissioner Lisa Deeley said that the satellite election offices (SEOs) will be opening on a rolling basis, with the first seven debuting on September 29. That means starting September 29, voters will be able to drop off their mail-in ballots in-person at one of the SEOs during their hours of operation.

Voters who have not yet requested a mail-in ballot will be able to go to the office, request a ballot, fill it out, and turn it back in—all in one trip. For those who have already requested mail ballots, the commissioners will begin mailing those out by this Friday.

The Commissioners also voted Wednesday to update the procedures for replacing mail ballots before the election. Voters must wait until October 6 to request a replacement ballot at one of the satellite election offices, in order to avoid duplicating ballots already being delivered in the mail. So if your ballot hasn’t arrived by the sixth, and you think it may have been misplaced, you can go to one of the SEO locations and get a new one.

Mail-in ballots come with two envelopes—a “secrecy envelope” and a “Voter Declaration envelope.” Nobody needs to know those terms, but you do have to remember to include both envelopes, and sign the outside one.

If you don’t include both envelopes, your vote won’t be counted, according to last week’s Pennsylvania Supreme Court opinion. According to some projections, based on the rates at which people did not include the secrecy ballot during the primary, this could lead to as many as 20,000 votes in Philadelphia not being counted, and as many as 100,000 in Pennsylvania overall. The Biden campaign is taking this seriously and launching a voter education campaign about the two envelopes.

The city commissioners released a voting guide with pretty straightforward illustrations of how it all works, and it’s worth fixating on just these slides because this is the part that’s easiest to accidentally mess up if you’re not paying attention. Make sure not to write anything on the inner envelope either, as that’s another reason your ballot could be rejected. 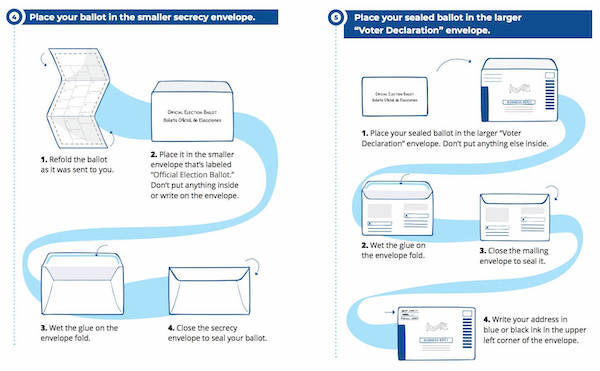 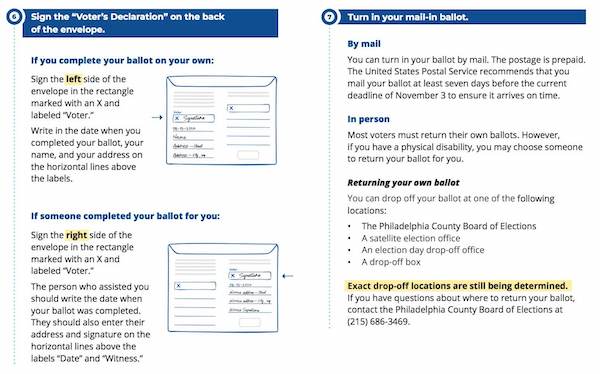 Most Polling Places Are Confirmed

The city commissioners announced another tranche of confirmed polling places this week, with just a few hundred locations yet to confirm.

View the list to see if your division’s polling place is on there.

The city has approved locations for 1,440 polling places (out of 1,703 divisions in all), and the locations approved so far are all divisions that will be returning to their November 2019 locations.

Related from The Philadelphia Citizen:
Power The Polls
The city needs to recruit another 4,000 people to work the polls to ensure voting goes smoothly on November 3. Here’s why it matters—and some ways we can prevent this last minute scramble in the future

There are still 263 divisions remaining without confirmed locations. Most of these will likely be proposed to move to new locations for various reasons, including public health considerations. The board will be voting on these at their upcoming meetings in the next few weeks. The list of confirmed locations is still subject to change, but we can assume most of them are locked in at this point.

GOP Response to the PA Supreme Court: Burn It All Down

The state Supreme Court tried to settle many of the issues in the election, but Pennsylvania Republicans are laying the groundwork to appeal that decision in federal court, where a lawsuit by the Trump campaign is still alive.

Republicans are asking the Western District of Pennsylvania to specifically strike down the PA Supremes’ decision extending the deadline for counting absentee ballots until Friday, November 6th at 5 pm. Military and overseas ballots are still accepted a week after the election, so there is precedent for accepting them after the date.

That would cause some chaos, if successful, but not nearly as much chaos as throwing out the results of the vote and appointing some random Republican electors to hand the election to Donald Trump, which is apparently something that could happen in the United States of America in 2020.

Pennsylvania top Republican officials don’t deny they’re considering taking things there in a rather frightening piece in The Atlantic about the democracy doomsday scenario.

According to sources in the Republican Party at the state and national levels, the Trump campaign is discussing contingency plans to bypass election results and appoint loyal electors in battleground states where Republicans hold the legislative majority. With a justification based on claims of rampant fraud, Trump would ask state legislators to set aside the popular vote and exercise their power to choose a slate of electors directly. The longer Trump succeeds in keeping the vote count in doubt, the more pressure legislators will feel to act before the safe-harbor deadline expires […]

In Pennsylvania, three Republican leaders told me they had already discussed the direct appointment of electors among themselves, and one said he had discussed it with Trump’s national campaign.

“I’ve mentioned it to them, and I hope they’re thinking about it too,” Lawrence Tabas, the Pennsylvania Republican Party’s chairman, told me. “I just don’t think this is the right time for me to be discussing those strategies and approaches, but [direct appointment of electors] is one of the options. It is one of the available legal options set forth in the Constitution.” He added that everyone’s preference is to get a swift and accurate count. “If the process, though, is flawed, and has significant flaws, our public may lose faith and confidence” in the election’s integrity.

Jake Corman, the state’s Senate majority leader, preferred to change the subject, emphasizing that he hoped a clean vote count would produce a final tally on Election Night. “The longer it goes on, the more opinions and the more theories and the more conspiracies [are] created,” he told me. If controversy persists as the safe-harbor date nears, he allowed, the legislature will have no choice but to appoint electors. “We don’t want to go down that road, but we understand where the law takes us, and we’ll follow the law.”

In the most recent poll, Joe Biden had a nine-point lead over President Trump in Pennsylvania, and on average he’s been polling about five points ahead lately, so it’s unclear whether this will ever really go anywhere.

The strategy relies on Donald Trump being ahead in the count on election night and for several days after, and then stopping the counting of mail-in ballots somehow. It’s unclear whether this could get past the Pennsylvania Supreme Court, where Democrats currently enjoy a comfortable majority, and which would presumably be strongly disinclined to stop the count prematurely.