Join the Conversation About PYB on Social Media

Take part in PYB’s “I Am Philadelphia Basketball” campaign by using the hashtag #IAMPYB to share thoughts on why basketball is important to you.

Take a virtual tour of the center

Take a sneak peek with this beautiful 3D rendering of the upcoming building and outdoor space. 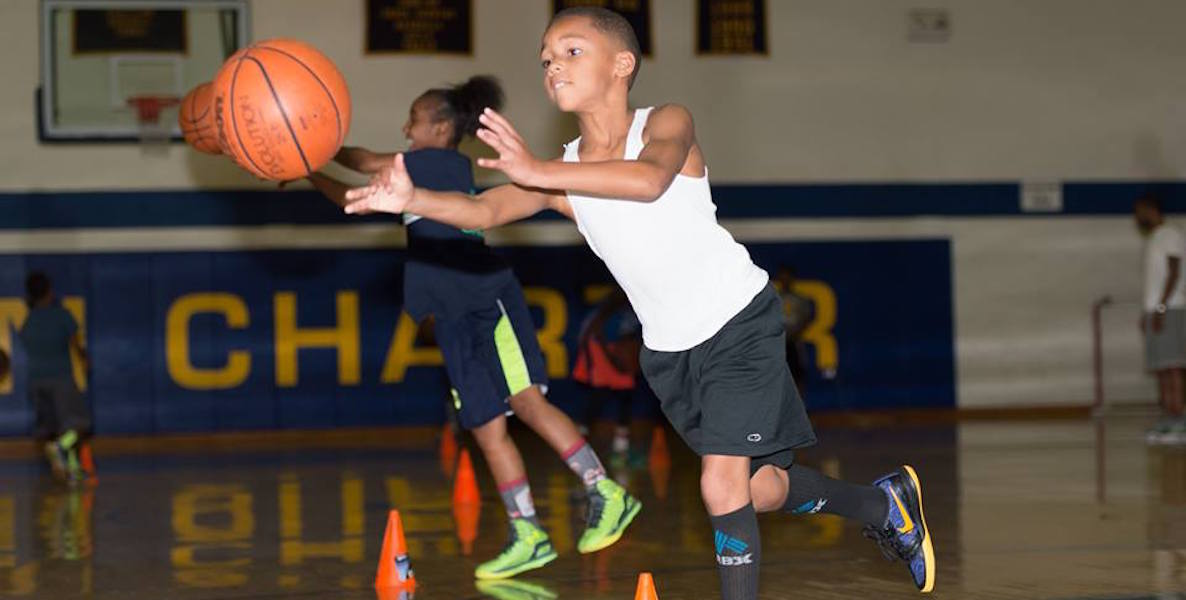 As March Madness gets underway, it’s hard to be a fan and socially conscious. Enter Philadelphia Youth Basketball, which uses sports to shape inner city kids

As March Madness gets underway, it’s hard to be a fan and socially conscious. Enter Philadelphia Youth Basketball, which uses sports to shape inner city kids

This week, the thrilling NCAA Men’s Basketball Tournament gets underway. As a sports fan, it’s one of my favorite times of the year, filled with rattling emotions: the high-fiving athletes, the crying cheerleaders, the blood vessel-popping coaches. Unfortunately, I also just started reading Indentured: The Inside Story of the Rebellion Against the NCAA, by New York Times columnist Joe Nocera and Ben Strauss, and it has me checking my enthusiasm and wondering: Can one be a sports fan and have a social conscience?

This is not a new conundrum. Watch the film Concussion, which documents the NFL’s lies when it comes to its epidemic of life-threatening head injuries; the league finally admitted the truth only this week. Or read about how the $10 billion league pays its cheerleaders below minimum wage…and tell me you don’t feel complicit in a socially irresponsible endeavor. Being a fan of the NFL has somehow become akin to cheering for Big Tobacco. Last year, I was similarly bummed when my Sixers—I’m a long, long, long suffering fan—announced they’d be moving their offices to Camden, taking with them some 200 jobs.

As sports and big business have merged, it’s as if social responsibility in sports has become a quaint notion belonging to a more innocent past. Nocera and Strauss lay bare the sham that is “amateur” intercollegiate athletics, exposing a systemic exploitation of young, primarily black athletes by institutions that purport to be places of wisdom.

A few years ago, when Turner Broadcasting and CBS paid $11 million for the rights to televise the NCAA tournament, Citizen contributor Charles Barkley, who will once again be broadcasting the games and starring in some hilarious March Madness commercials with Spike Lee and Samuel L. Jackson, had this to say: “I’m concerned about the NCAA not graduating these players. They aren’t paying the players. I’m not going to go on a rant about where the money goes, but you have an obligation to graduate these players.”

New York Times columnist Joe Nocera has laid bare the sham that is “amateur” intercollegiate athletics, exposing a systemic exploitation of young, primarily black athletes by institutions that purport to be places of wisdom. It’s unconscionable, and particularly uncomfortable for those of us raised to believe that our pop culture sports fanaticism has long aligned with our sense of egalitarianism.

Since Barkley’s challenge, graduation rates have risen, but they’re still not good. The graduation rate for NCAA Division I men’s basketball players is still considerably less than the national average for full-time male students, and that’s particularly so when it comes to black athletes. That’s because Division I basketball (and football, for that matter) have become too big to fail. Many athletic departments have budgets in excess of $100 million and are effectively separate, self-sustaining entities on otherwise academic campuses. Recently, the New York Times captured the phenomenon in a disturbing investigation of the exploitation of a prized recruit by former Sixers coach Larry Brown, whose Southern Methodist University team, as a result, is currently banned from playing in the NCAA Tournament.

It’s unconscionable, and particularly uncomfortable for those of us raised to believe that our pop culture sports fanaticism has long aligned with our sense of egalitarianism. After all, the Civil Rights movement didn’t really begin with Brown v. Board of Education; it actually started seven years earlier, when Jackie Robinson broke baseball’s color line. Opposition to the Vietnam War didn’t start with Eugene McCarthy’s and Robert Kennedy’s 1968 campaigns; it was actually Muhammad Ali’s “I ain’t got no quarrel with them Vietcong” public statements that began to turn the tide against a wrongheaded military action. In the last few years, the historically homophobic sports industry has even embraced the coming out of NBA player Jason Collins and linebacker Michael Sam, and celebrated Caitlyn Jenner.

Still, when schools like the University of Connecticut two years ago won the NCAA title while graduating all of 8 percent of its players, it’s easy to get down every March. But then a conversation I had with Kenny Holdsman reminded me not to blame a subculture for ills that have long afflicted the culture at large. “Basketball,” Holdsman said, “is a game that disregards and disrespects lines of ethnicity, neighborhood, and economic difference.” That’s why he plans on using it to reach kids throughout Philadelphia in order to teach academics and life skills and build character.

Holdsman is the CEO of Philadelphia Youth Basketball, an ambitious undertaking and a tonic for the malaise that comes when reading our sports page headlines. Philadelphia Youth Basketball is a nonprofit that was announced late last year, featuring a long list of luminaries from the city’s basketball and philanthropic communities. Holdsman, who previously ran Legacy Tennis (formerly called Arthur Ashe Tennis) in Manayunk, put together an eclectic group—ranging from Temple Coach Fran Dunphy to philanthropist Janet Haas to venture capitalist and Citizen founding donor Wayne Kimmel; they’re raising $25 million to build a state-of-the-art sports and education facility in partnership with the civically-minded Goldenberg Group, the first step of a much-needed redevelopment of the 40-acre wasteland known as the Logan Triangle in North Philly. (The site, famously, of sinking homes back in the late ‘80s).

There are numerous sports-based youth development organizations doing great work throughout Philly, using sports as a hook to reach inner-city kids. There’s the Ed Snider Youth Hockey Foundation, which wraps the broccoli of character development, life skills, and academics in the fun of ice hockey. There’s the Cadence Cycling Foundation, started by the dynamic Ryan Oelkers, which similarly uses cycling as a way to holistically serve city kids. There’s nonprofit SquashSmarts, which bills itself as keeping “Philadelphia public school students in school, in shape, and on track for graduation.” And there’s a local chapter of Up2Us Sports, which posits that “sports is not ‘just a game’ —it’s one of the most powerful tools to positively transform kids’ lives.”

But Philadelphia Youth Basketball is arguably the most ambitious undertaking yet. Holdsman and his team have eschewed the typical nonprofit blueprint of crawling before walking, and walking before running. They’re in a sprint, so much so that, at the behest of Temple Coach Fran Dunphy, they’ve started pilot programs serving roughly 80 kids at Temple and a handful of schools, even before they’ve started to build their arena. “We can’t wait two years to build the facility,” Dunphy implored at an early meeting of the group at the Ballard, Spahr law firm, after hearing Holdsman point out that 52 percent of children of color don’t graduate high school in Philadelphia. “We’ve got to start reaching kids right away.”

Ultimately, the plan is to serve over 7,000 kids at the Logan facility, which will include eight indoor and six outdoor basketball courts, a 2,000-seat stadium court, classrooms and computer labs, workout facilities, health and wellness services, and a healthy-foods cafeteria.

The vision took shape while Holdsman was at Legacy Tennis and people like former Villanova standout and NBA player Alvin Williams and Simon Gratz High School basketball coach Bill Ellerbee told him they loved that he was trying to reach inner-city youth…but why use tennis as the hook? Why not, Ellerbee suggested, embrace a sport already being played throughout all parts of the city?

“Basketball,” says Philadelphia Youth Basketball CEO Holdsman, “is a game that disregards and disrespects lines of ethnicity, neighborhood, and economic difference. If 100 of our kids wind up playing college ball, great. But if we can increase the percentage of kids who graduate high school and go on to college, that’s even greater.”

Holdsman, whose background is in educational development, is as well versed in educational pedagogy as he is in hoops terminology. He quotes the findings of Angela Duckworth, the Penn researcher known for her groundbreaking work on grit, when he argues that resilience can be taught. And he rattles off names of area educators on his team, including Dave Felsen, the former headmaster at Friends Central School.

“This is not about developing basketball players,” Holdsman says. “There are any number of playgrounds in Philly where kids are playing every day. But this will be the place that couples that with positive coaching relationships, and curriculum built around sportsmanship, resilience, conflict resolution, academic support and leadership and character development. If 100 of our kids wind up playing college ball, great. But if we can increase the percentage of kids who graduate high school and go on to college, that’s even greater. That’s what success looks like.”

It’s a very non-Philly thing, this rejection of growing incrementally. Holdsman and his team — which includes former Sixer Aaron McKie—are thinking big. And they’re not forgetting that, in Philly, basketball is all about heart. They’ve launched a social-media campaign, “I Am Philadelphia Basketball,” asking city residents to post short videos explaining the game’s importance to them.

It got me thinking back to the ‘70s of my youth in this city, a hotbed of hoops. I’d make pilgrimages to Penn’s storied Palestra, captivated by the romanticism of local kids going to local universities and colleges, waging holy hardwood war. In South Philly, a guy named Dr. J had the coolest nickname and Afro going, and he showed a generation of white and black kids alike that it was possible to fly. I flashed back on myself in the driveway of my suburban youth, with my delusional high-flying dreams. That was before our sports became so corporate and soulless. But Holdsman would maintain that, while the culture at large may have changed, the game hasn’t; it can still inspire young people to dream and achieve.