Can you have a social conscience and still be a football fan?

The National Anthem Conundrum
An evening out with Charles Barkley sparks some ruminations on an absurd American ritual
Can This Wayne Entrepreneur Save The NFL From Itself?
It’s harder than ever to be a sports fan and socially conscious. Here’s a way to return to the days when watching a game felt wholesome.
12 Ways of Looking at the NFL Draft
A Fairmount resident, in the epicenter of the city’s festival-mania, wonders: Do I hate fun? 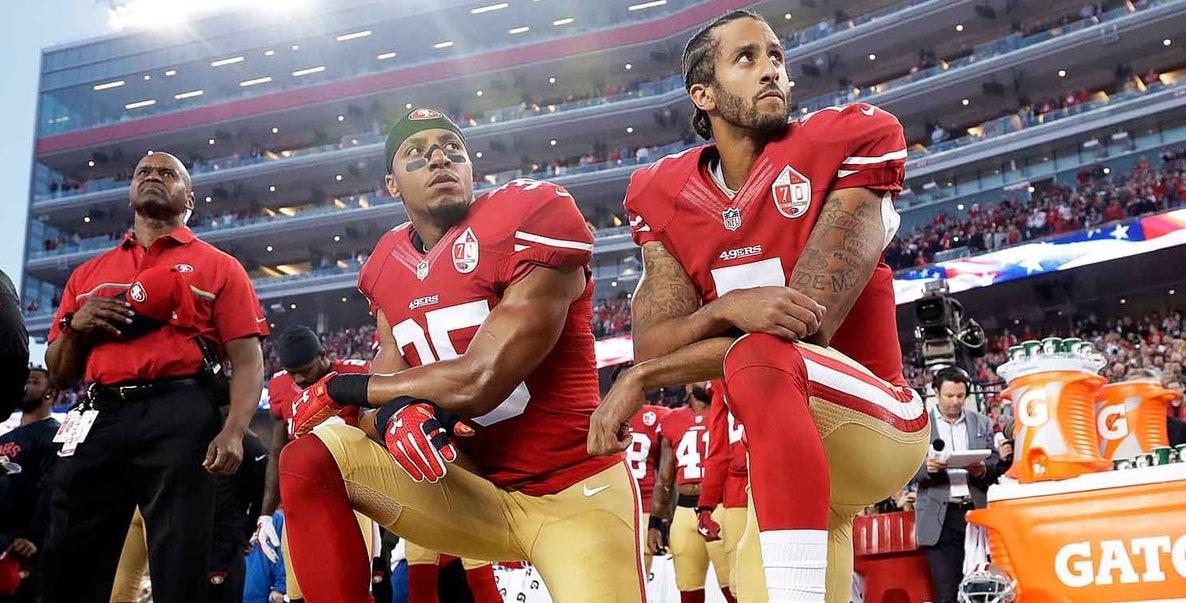 As players kneeled and protesters converged on the National Football League’s headquarters in New York this past week, Reality Check listeners were left with an important question: Was that enough?

Symbolic gestures are important. They get the ball thrown and rolling on other activities, sparking community awareness and branding campaigns. In the case of the brewing, potentially boycott-ready Colin Kaepernick controversy, symbolic gestures did seem somewhat useful … for symbolic purposes, especially last year when the former San Francisco 49ers quarterback triggered it. It may not have been the most strategically sound thing to do: while the passion was there, the timing was arguably off.

The political environment during the 2016 election cycle was raw enough; suddenly, Kaepernick enters the fray with his explosive dis of the National Anthem and flag in one, an act that certainly served as one of several key moments further tipping white voters in Trump’s direction. A smart political strategist advising Kaepernick would have recommended postponing that til the next season—after folks blew up the Death Star that was Candidate Trump.

Adding insult to injury: Kaepernick wasn’t registered to vote—and was proud of it, arguing that who needed to vote when the political process didn’t seem to do anything for anyone?

One less Kaepernick vote, millions of eligible (and registered) non-voters, suppressed votes and Bernie Sanders’ votes later and here we find ourselves in this colossal mess of a narcissist who holds the nuclear codes. That’s not blaming either Kaepernick or the other athletes or the victims of several hundred years of oppression. It’s simply saying that strategy and timing have got to be everything.

Still, the act did highlight the issue of police brutality—even if the execution was flawed—in a way that hadn’t been talked about in many years. Modern black athletes, these days, are not really in the habit of making activist stands and sacrifices the same way their predecessors did. So, on some levels, it was refreshing to see at least one highly paid and prominent black athlete doing it.

Related from The Philadelphia Citizen:
Muhammad Ali's Philadelphia Story
The city played a role in the making of the legend—and in the debate over the meaning of his legacy

Still, there was much angst expressed by both Reality Check host and audience over whether or not the kneeling really was enough. It’s a rather treacherous question to ask, but it’s essential. On principle, it is worth making a statement on the issue of not just Kaepernick, but player rights and more universal questions regarding workplace rights, institutional discrimination and other topics. But, what’s the use in making a statement if there’s nothing coherently structural to back it up?

There is an indication that players are starting to do more. Eagles Safety Malcolm Jenkins and former Baltimore Ravens wide receiver Anquan Boldin have so far recruited 40 fellow NFL players to actively lobby Congress around issues involving police reform, one of several things Jenkins has done to push for a change to our criminal justice system. Several—including Jenkins,  Boldin and Connor Barwin, a former Citizen contributor—have foundations that work to help struggling families and neighborhoods in cities. In the NBA, LeBron James has bucked his Cleveland Cavaliers owner by actively campaigning for Hillary Clinton last fall—and condemning Pres. Trump’s comments about Charlottesville. And there’s Steph Curry, who all but called Trump an “ass” in an interview earlier this year.

If this is about the anthem, the flag and all things patriotic, then we should be having meatier discussions and organizing sessions on how we impact upcoming elections in a bid to dramatically reshape policy.

Still, it’s relatively few player who are willing to have Muhammad Ali, Arthur Ashe or Wilma Rudolph moments. It would be great to see more players donating to civil rights organizations or contributing to political action committees that are playing a role in 2018. In the wake of great activist and author Dick Gregory’s death, are these players (besides Kaepernick) willing to give up some pay in a fashion comparable to the career millions Gregory lost in choosing the Civil Rights Movement over the entertainment industry? Not that anyone is asking them to. But it is significant that the larger protesting audience is putting pressure on them to do more than just kneel.

Reality Check listeners agreed for the most part that we can’t just settle for highlighting moments and issues; organizers have got to press more for tangibles beyond kneels and protests. We seem to get locked into perpetual protest mode and that’s frustrating; it’s not really changing the ownership dynamic in the NFL, nor does it appear that it will anytime soon

What’s essential is to instigate plans for real change. If this is about the anthem, the flag and all things patriotic, then we should be having meatier discussions and organizing sessions on how we impact upcoming elections in a bid to dramatically reshape policy.  No one is making that connection, at least not yet.

It is true that NFL owners are wrong: ignoring critical workplace issues, perpetuating a hostile work environment through excessive punishment and altogether ignoring a massive chunk of their fan base—and, not to mention, they’re active cover-up of devastating concussion-related illnesses. That said, protesters now must find energy to begin channeling that outrage into structural action. Kneeling doesn’t really change the condition of anyone’s life. Money, politics and legislative sausage making do.