You can also support the wider movement for criminal justice reform at Fair and Just Prosecution or by donating to the Art for Justice Fund.

The Citizen Recommends: Hidden Lives Illuminated
A series of films created by incarcerated men and women in Philly has a common thread: Humanity. See them at Eastern State Penitentiary this month
The Citizen Updates: A Hub for Justice
Philly won $1 million from Bloomberg Philanthropies for a Juvenile Justice Hub proposed by city cops. Could it become a national model of reform?
The Citizen Recommends: Bailing Out Moms
More than 80 percent of women in Philly jails are awaiting trial. Help the People’s Paper Co-op pay their bail in time for Mother’s Day—then, welcome them home
Michael Rubin’s $50 Million Big Bet
The entrepreneur and Meek Mill BFF doesn't do anything half-assed. The parole and probation system might not know what hit it
Guest Commentary: Abolish Prisons
A lawyer and advocate calls for ending our expensive culture of incarceration—and instead spending money to help prevent many crimes in the first place

More on “Points of Connection” with the artist

Welcome to the enhanced audio version of this article
Enjoy

And go here for more audio articles like this by CitizenCast 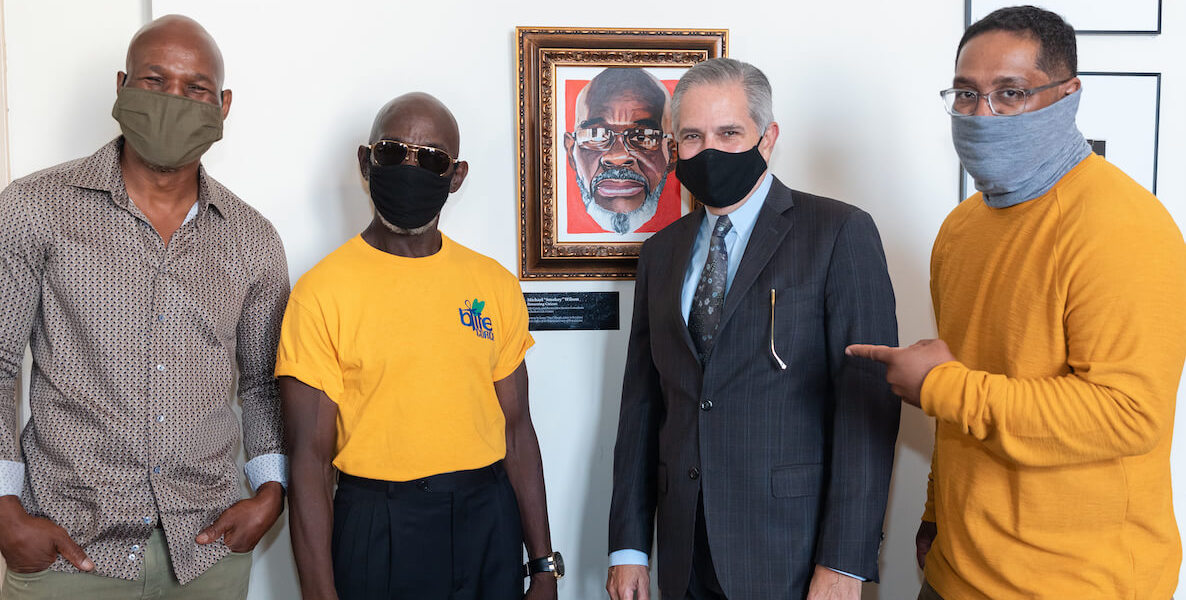 “Points of Connection”—a collection of 10 portraits by the DA’s first-ever artist-in-residence—offers a moving look at the people impacted by, and impacting, our justice system

“Points of Connection”—a collection of 10 portraits by the DA’s first-ever artist-in-residence—offers a moving look at the people impacted by, and impacting, our justice system

The portraits are impossible to miss—vivid and vibrant and saturated with bright, bold colors. Set against a sunny yellow is the somber, bearded face of Donnell Drinks, a returning citizen who spent nearly three decades in prison and co-founder of the grassroots re-entry group G.R.O.W.N. (Gaining Respect Our Worst Nights). A smiling Ebony Wortham, an assistant district attorney, is framed by deep magenta; the face of Stanley Crawford, a victims’ advocate ever since the murder of his son, stands in stark relief against a brilliant red canvas.

There are 10 paintings in all, each depicting someone with a role in Philadelphia’s criminal justice system. What’s most striking when you see them all together isn’t the enveloping colors or even the painterly details captured in each face: It’s the uniform sense of humanity you see across the collection. The feeling like you know these people.

This is no accident.

“The portraits were designed to create empathy and connection between the viewer, the subject, myself as the artist, and anyone who’s in the space of the work,” artist James “Yaya” Hough explained last week in a panel about his exhibition, which is on display across the city through the end of October. “That, to me, was the linchpin of this project. We can’t have justice without empathy. We can’t have justice without connection.”

He named his series “Points of Connection,” and it’s the culmination of the last 10 months that Hough, a Pittsburgh native, has spent as the artist-in-residence at the Philadelphia DA’s office—a new project born of an unlikely partnership between Mural Arts Philadelphia, the DA’s office, and Fair and Just Prosecution, a national network of reform-minded prosecutors.

It isn’t just the concept of justice that underlined Hough’s residency and his work, but more specifically, the justice system and its potential for transformation, for reimagining. For reform.

It’s a world with which Hough has an intensely personal connection. In 1993, as a 17-year-old, he was sentenced to life in prison with no parole for fatally shooting a man on a Pittsburgh street. For the next 27 years, he lived at Graterford, the state prison. It was there that he learned his craft and honed his remarkable talent, through both art classes and Mural Arts Philadelphia’s Restorative Justice program, which offered incarcerated citizens the chance to work on the murals that would be installed on walls all around our city. (That program was one of a handful at Mural Arts that got hit by Mayor Kenney’s budget cuts last spring.)

Over roughly 15 years, Hough worked on upwards of 50 murals. Then, in 2012, the unexpected: The Supreme Court ruled life sentences for juveniles—like the sentence Hough had received—to be unconstitutional. Hough was resentenced, and released from Graterford in 2019.

Meantime, the California-based Fair and Just Prosecution (FJP) had teamed up with Philly’s Mural Arts to win a grant from the Art for Justice Fund—a partnership that would create the first-ever (anywhere!) artist residency in a district attorney’s office.

“The idea was simple and revolutionary,” FJP’s Miriam Krinsky explained during the panel. “It’s built on two pillars of understanding. One is that through proximity comes understanding.” The second: “Recognizing that through art comes change. Art can unsettle the status quo.”

To see Hough’s vivid paintings of these people is to remember the humanity inside a system that too often feels inhuman and impenetrable, a point Krasner himself has been keen to make in praising Hough’s work.

One of the hopes for the residency, she says, was that it might inspire other prosecutor offices around the country to follow suit, using art as a way to inspire change about the look and meaning of justice. (Several offices have already reached out to her, she says.)

When it came time to choose an artist, Hough—a man whose work had already been featured in multiple museum exhibits, a man who was already involved in prison-reform and fair-sentencing movements—was a natural fit, and, according to Mural Arts Executive Director Jane Golden, “by far the best person for this job.”

Thus the residency was cemented as a bridge between advocacy and the arts—a “new way of solving old problems,” as Hough puts it. He began a 10-month process of interviewing and painting and forming real relationships with 10 people whose stories in the justice world he wanted to highlight—a group that included returning citizens, victims’ advocates, prosecutors, a judge, even DA Larry Krasner.

To see Hough’s vivid paintings of these people is to remember the humanity inside a system that too often feels inhuman and impenetrable, a point Krasner himself has been keen to make in praising Hough’s work.

It’s the idea of change—along with love and hope and a big dose of creative experimentation—that has been the driving concept behind “Points of Connection,” Hough says. Not surprisingly, these are some of the same themes he points to when speaking about rethinking justice in today’s America.

“What justice looked like in the 1970s is not going to be what justice has to be in 2020, in 2021 and beyond,” he says. “There are already many, many existing restorative justice models we can draw from. A buffet of good ideas, many of which have been executed very well. From my perspective, we’d be wise as a country to start generating lists of best practices in restorative justice models, and talking about how to integrate them into existing structures.”

To see “Points of Connection,” you can participate in one of the walking tours that Mural Arts is offering on October 17 and October 31; both are guided by Hough, along with curator Paul Farber. Advance tickets are required, as are masks.

Of course, it’s public art, so you can also simply stroll by the DA’s office (3 South Penn Square), where large-scale vinyl versions of the portraits grace the windows of the building.

For the rest of the month, you can also see some of the actual portraits at City Hall, outside the mayor’s office (1400 John F. Kennedy Boulevard, with limited public access), Pennsylvania Academy of the Fine Arts (128 N. Broad Street), Eastern State Penitentiary (2027 Fairmount Avenue, admission required), and the Beckett Life Center (1410 N. 16th Street).

As Krasner pointed out, there’s a long and meaningful history of public art in the world of social reform. “When we are talking about cultural change and cultural shifts,” he said, “it’s not just elected people who think they’re fancy. That’s not how culture changes. Culture changes when all of us are mixing together.”

Artists like Hough, he says, have a unique way of bridging divides—like the divides between the powerful and powerless, between the victims and the defendants and the prosecutors. “That’s the kind of unity they know how to bring, and the type of division they can overcome.”