Home » Education » Reality Check: Hey Eagles, can you do North Philly a solid?

Last month, Temple University President Richard M. Englert announced that the school will be taking the next steps in developing the multipurpose facility that will including a football stadium. Before Temple moves ahead with their plans make sure you know everything you need to know about the stadium, from the project history to what it will mean for Philadelphians and the city.

Think Temple shouldn’t build its stadium? Join Stadium Stompers, a group of students, faculty and residents, opposed to the development and in favor of Temple doing more for the community. Learn more about the Stompers here. 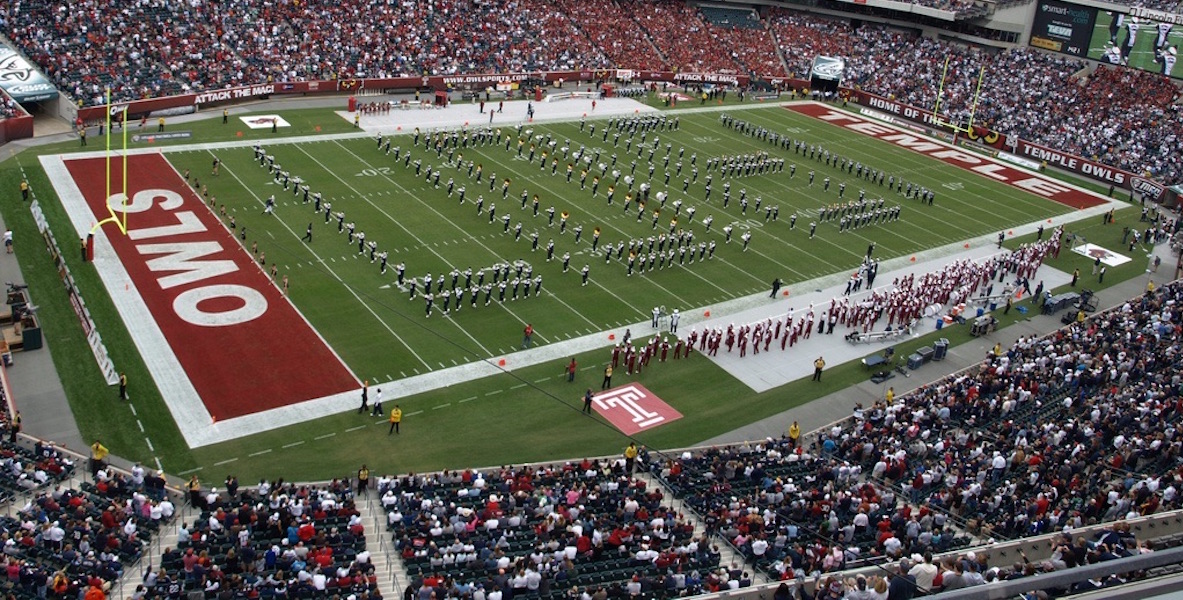 Reality Check: Hey Eagles, can you do North Philly a solid?

Reality Check: Hey Eagles, can you do North Philly a solid?

Since we’re on the subject of the Philadelphia Eagles’ magnificent Super Bowl win on Sunday, maybe now’s the time to ask them if they could do North Philly a favor: Keeping Temple University from building that monstrosity of a football stadium on Broad Street.

After all, the Eagles have built its Cinderella brand all season on the strength of being the most “socially conscious” team in the National Football League (for whatever that’s worth). So, this would be a good time for the Eagles organization to look deep within its corporate soul and find us beleaguered North Philadelphians—current and ex-pat—a solution to the football stadium crisis brewing in our backyards.

Temple, with its insatiable gentrifying appetite, has greedily consumed the North section of Philly for years, increasingly expanding its footprint in a bid to become the world’s largest urban university. Not to knock it too much—that’s actually fine. In a way, why not? So much of North Philly is old, crumbling and dejected into sunken house disrepair that folks who grew up there should be honest with themselves. Who wouldn’t want to flip it? And what city government wouldn’t want a generously-funded public university to help gut, clean and renovate the notoriously distressed section?

At issue is the way Temple pursues that dream, forcing long-time residents out along the way and creating rippling scenarios of mass displacement. Studies already suggest a direct correlation between aggressive gentrification and aggravated low-income outcomes. As shown by Hidden City Philadelphia’s David Hilbert, there has already been a 19 percent decrease in black North Central Philly residents—leading to the growth of whiter residents and mostly white Temple students.

CitizenCast: Business for Good: A Pillbox With Heart
Philly-based startup Fellow may have created the solution to one of healthcare’s biggest crises

A 12 percent decline in certain black residential tracts between 2000 and 2014, according to Hilbert, translated into those residents “mov[ing] into more middle-income black neighborhoods like Wynnefield and Overbrook, while others relocated into pockets of new poverty in the lower Northeast. Many left the city altogether.” While the top of Hilbert’s last sentence there attempts to put a positive spin on it, we can’t ignore the Federal Reserve Bank of Philadelphia’s observation that more than 20 percent of vulnerable Philly residents who are pushed from one neighborhood to another end up in an even worse, much more distressed hood.

While, yes, Temple is—as Fed Philly notes—an “anchor institution,” we still have to ask who that helps. And if the current rate of Temple expansion is already displacing a disturbingly high number of residents, while creating a nuisance that its bullshit Good Neighbor Initiative doesn’t solve, then we can only assume a football stadium in the middle of North Philly won’t make it any better.

Temple’s Owls continuing to play at the home of the, now, legendary Super Bowl champs who valiantly slayed the pro-Trump Goliath would be a better option. It’s way better than the high displacement, environmental impact, massive traffic jams and logistical headaches that would cause for North Philly. Broad Street, at least during college football seasons, would be an unusable mess.

On the other hand, the Linc is the stadium that housed the Eagles’ remarkable playoff run; it is the home of a team that is now nationally beloved for its DeBrady-fication skills. One has to ask why it’s absolutely necessary for the Eagles to now double their rent. Probably just good old-fashioned capitalism, despite the social movement name the team has built for itself; it’s just time to capitalize on #FlyEaglesFly.

For whatever reason, the Eagles are mugging Temple for an extra $1 million a year to lease the Linc, in addition to a $12 million deposit. Shows how much the Eagles care about higher education, huh? Even Mayor Kenney blasted Eagles ownership for the move last year for the sudden slumlord move. But with City Hall caught up in Super Bowl euphoria and the money grab that comes from anticipated visibility and tourism, don’t expect any follow up on that. The Eagles are in a position to get anything they want from the city.

College football programs, according to many recent studies, are proven fiscal black holes for everyone involved, especially students and families who end up paying for them through spiked costs and fees. Has Temple figured out a way to pay for that $130 million, easily-overrunnable project other than borrowing off bonds and increasing tuition?

But the economics of a Temple-owned stadium makes little sense in terms of the return on investment. For one, Temple risks continually pissing off its humble neighbors and there’s no indication the university has concocted a grand plan to repair institutional-residential relations.  They figure all they need is the backing of local politicians, including those—like Kenney—who’ll they’ll expect to back off considering the Eagles’ Super Bowl win.

Also, what will make Temple different from other college football stadiums? College football programs, according to many recent studies, are proven fiscal black holes for everyone involved, especially students and families who end up paying for them through spiked costs and fees. We already know North Philly residents, and their kids won’t be getting anything out of the stadium other than promises to pick up trash. Nor is it likely Temple players, like all college sports programs, will be getting paid. Have they figured out a way to pay for that $130 million, easily-overrunnable project other than borrowing off bonds and increasing tuition?  Pennsylvania state tuition is already the third highest in the nation and Temple has raised its fee by 2.5 percent this school year, more than likely in anticipation of that football stadium.

An SB Nation study of the seven cities where college and professional teams share stadiums shows that, for the most part (with the Patriots’ Gillette stadium being the exception), it works. In fact, the Owls-Eagles collaboration was highlighted as the most ideal of college-pro arrangements, with SB’s John McWinnie noting that “Temple and the Eagles have been tied at the hip since 1978, and for the relationship to last this long, the Owls must be benefiting from using the Eagles’ facilities.”

Honestly, who really wins with a new football stadium? Is it all cosmetic, just to see more red and white light poles and buildings along Broad Street? The better, least costly and more peace-of-mind option is to simply keep the Owls at the Linc. So why are influencers on both sides trying to mess that up and, in the end, ruin it for the average folks and fans in the middle of it?