Live in a neighborhood without many grocery stores that sell fresh produce? Sign up with Farmacy to get local fruits and vegetables delivered to your door. You can also find Steward at Franny Lou’s Porch pop-up markets.

Foodizen: Generation Urban Farmers
W.B. Saul, the largest agricultural school in the country, trains students in the art of farming. Yes, even in the city
Citizen of the Week: Kenneth Walker Jr.
The North Philly native turned a former campaign office into The Unity Center, a twice-weekly food distribution site whose clients have tripled since Covid-19
Feeding Peacetown
The pandemic hasn’t kept North Philly Peace Park from getting healthy food to their neighbors—and building a self-reliant community for the future
Citizen of the Week: Piseitta Arrington
The Northeast Philly resident has been donating food to hungry Community College of Philadelphia students since January. Now, she’s offering free meals to a different population: those in need because of coronavirus
Democratizing Food
For the last decade, the Common Market has spread affordable access to locally-sourced nutrient-dense food to the city’s neediest. Now its mission is spreading nationwide

You can help Farmacy’s sources grow more food for the community—donate to Mill Creek Farm and Bartram’s Garden Resiliency Fund.

How to Fight Food Insecurity in Philly
Donating peanut butter! Organizing virtual food drives! Sorting cans! Here are 15 simple things you can do now to help the hungry and food-insecure citizens of Philadelphia. 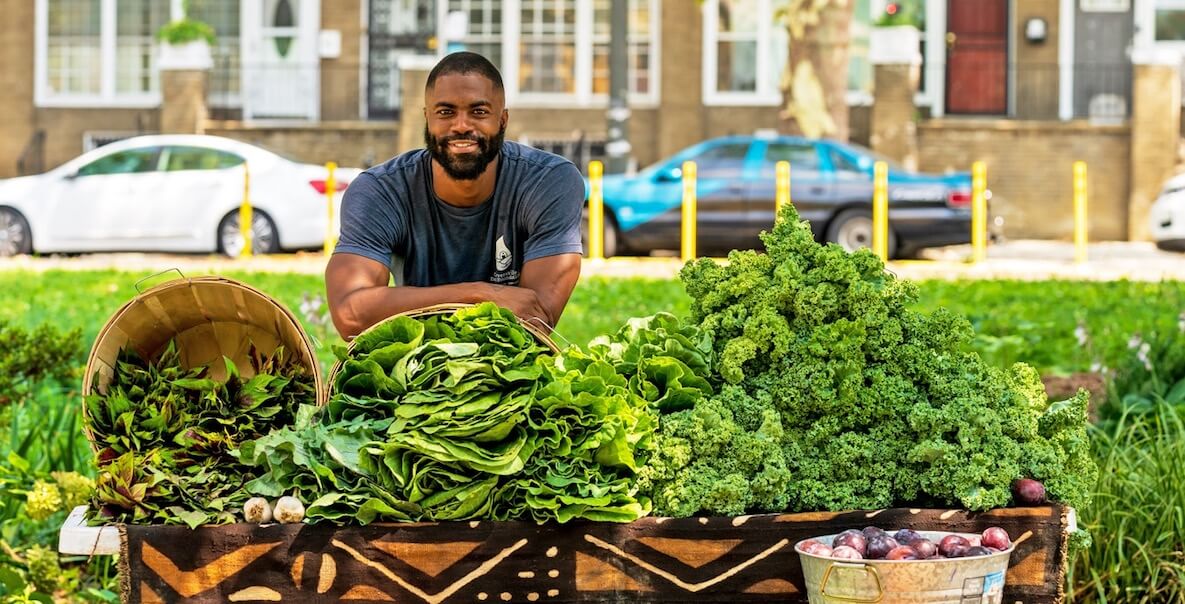 If you ask him, Khalil Steward will say that his journey to starting a produce delivery service began years before he was born. The produce store his grandfather owned in Philly’s Somerville neighborhood during the 1950s was the first seed.

Though the store closed before Steward was born, he remembers his family talking about it as a place of pride. Neighbors would come in to buy fresh fruit and vegetables, often stopping to chat with one another and the clerks in the aisles. “It did a lot for the community,” Steward says.

Growing up in Philly, Steward watched neighborhood produce stores like his grandfather’s shut down, leaving many communities without easy access to fruits and vegetables. At the same time, he saw community gardens and urban farms in many of those same neighborhoods flourishing.

In 2019, he started a food delivery service to bridge the gap. Farmacy sources fruits and vegetables mainly from local Black and brown farmers and makes them available to Philadelphia residents at affordable prices. Steward delivers produce to an average of 50 families every other week and participates in pop-up farmers markets at Franny Lou’s Porch and the Second Sundays market in Fishtown.

His customers are primarily elderly folks and parents who value cooking healthy meals for their kids—but who don’t have convenient access to fresh produce, he says. “For a lot of my customers, there’s no supermarkets near where they’re living.”

This year, Steward is working to enable customers to purchase food using SNAP/EBT benefits and plans to launch a food pantry program at his alma mater, Delaware Valley University. “I think this will help Farmacy grow and fulfill our mission to try to eliminate food insecurity,” he says.

In 2020, 16.3 percent of Philly residents faced hunger and food insecurity. And even more Philadelphians lack access to fresh fruit and vegetables. A 2019 report found that over 80 percent of retail food stores in the city have a low supply of fruits and vegetables. Grocery stores that do offer ample fresh produce are disproportionately concentrated in just five neighborhoods: Center City, University City, West Mount Airy, Chestnut Hill, and Upper Roxborough.

In college, Steward volunteered as a marketer with Delaware Valley’s Hope of the Harvest, a charitable garden that provides fresh fruit and vegetables to low income Philadelphians. Later, he interned with the Carversville Farm Foundation, a non profit that grows produce for people without access to fresh produce.

But it was a marketing class assignment that spurred the idea for his business. He proposed using a former ambulance as a marketing component for a mobile food delivery service. The name of the business, he said, would be Farmacy, a play on words meant to suggest that food can be the best medicine.

After college, Steward put the idea on the back burner and spent several months working with a community-supported agriculture system in Cape Town, South Africa. Closer to home, he worked as a farm manager for Urban Creators, an agricultural cooperative in Northeast Philadelphia. Eventually, he got a job as a warehouse manager with Share Food Program, one of the largest hunger relief organizations in Philly. Since the pandemic started, Share Food Program has served more than 1 million people each month, and Steward remembers working with them to feed over 5,000 people one weekend in March 2020.

“I had been taught that produce is grown by white people, and if you want to eat healthy you have to go to markets in predominantly white areas. Farmacy flips that myth on its head and offers the most amazing way to buy local produce.”

As he worked on farms and distributed food to those in need, Steward interacted with Black and brown farmers and those growing food in urban spaces, and it gave him a different picture of what farming could look like as an industry.

The most recent USDA Census of Agriculture found that only roughly 1.3 percent of all U.S. farmers are Black. But as Steward worked on farms he realized how creative Black urban growers were making the most use of limited growing space and growing high quality fruits and vegetables through natural and chemical-free farming methods. He knew he wanted to support them as he built his business.

To connect with the farmers he wanted to support, Steward joined Soil Generation, a Black and brown led coalition of urban growers in Philadelphia. “That’s how I got the trust of the farmers, and how I got to build friendships with them,” Steward says. “It’s not just a business thing, I actually call some of these farmers my brothers.”

After all, they share a common purpose: providing high-quality, locally-grown produce to their communities. The Sankofa Community Farm at Bartram’s Garden, for example, hosts weekly farm stands to provide convenient access to the residents of the surrounding Kingsessing and Elmwood Park neighborhoods. But of course there are folks who can’t make it down to the farm (or the Clark Park farmers’ market on Saturdays)—Steward’s delivery service helps these farmers reach more people with their produce.

Along with Sankofa, Farmacy works with Mill Creek Farm in West Philly, D&D Farm in Berks County and Breah Banks, farm and land manager for Share Food Program. Each week, Steward picks up the produce from the farms, including collard greens, curly kale, cherry tomatoes, blueberries and apples. He also works with Black farmers in other parts of the country to source items like avocados and oranges, in order to offer a wider variety of produce to his customers.

One thing that makes Farmacy special is Steward’s relationship with his customers. During each stop, he takes the time to talk—he asks what types of fruits and vegetables they’d like to be able to order; finds out if they have access to produce at local grocery stores and occasionally offers free food to customers experiencing hard times.

Nunera Amun started ordering produce through Farmacy in summer 2020 after seeing an Instagram post promoting the business. She appreciates that Steward has taken the time to text her personally with an offer of free food when he noticed she hadn’t purchased in awhile.

“Usually, when I go to farmers markets and grocery stores it feels very transactional, but when I shop at Farmacy I feel like I’m visiting family,” Amun says. “I pray that Farmacy is the future for all produce markets in this country because it is truly special.”

RELATED: Read about more incredible locals in our Citizen of the Week archives 👈

The business has also transformed how Amun thinks about farmers and farming in the city. “The idea of getting local produce from Black and brown farmers really excited me,” she says. “I had been taught that produce is grown by white people, and if you want to eat healthy you have to go to markets in predominantly white areas. Farmacy flips that myth on its head and offers the most amazing way to buy local produce.”

Steward’s goal is to make sure Farmacy can continue to offer affordable prices. For now, he says the company’s delivery schedule takes into account pay schedules and when people receive their public assistance benefits by making deliveries at the beginning of the month. He’s also applying to be able to accept SNAP and EBT benefits through the USDA’s Food and Nutrition Services Department, which would allow the business to reach more customers. In 2019, 459,000 Philadelphians received SNAP benefits.

“It’s not just a business thing, I actually call some of these farmers my brothers.”

Meanwhile, Steward is working to expand by partnering with Delaware Valley University to run a food pantry on campus. He notes that food insecurity can be particularly challenging for students who may not be able to afford campus meal plans. In 2016, the report Hunger on Campus noted that 48 percent of college students in the U.S. faced food insecurity.

“Food insecurity is even crazier in college,” Steward says, recalling times when students he knew would sneak food from the dining hall in order to have enough to eat later in the week.

Steward recently left his work at Share Food Program to make Farmacy his full time job—he earns enough in sales to support himself—and brought on an unpaid intern, Lindsay Troyer, a graduate student at Delaware Valley University. His goal is to one day be able to support a small staff while providing as many people as possible access to fresh, locally sourced produce.

“I really am not trying to be a millionaire off of selling produce,” he says. “I’m just trying to make sure my neighborhood is good.”

How to Start a Garden in the City