Interested in learning more about Philly’s school district? Want to contribute to the work being done to improve schools, classrooms, and children’s experiences? Check out our do something guide to find out how you can get engaged:

Reading Lesson No 1—Teach the Teachers
How can all students learn to read by 4th grade if so many teachers struggle with teaching reading?
Staying Ahead of Educational Tsunamis
A public school principal argues that real education reform requires measuring schools more broadly and fixing them more locally
Failing Black Boys
We've written about #blackdegreesmatter. A public school principal weighs in by calling on schools to do more

Listen to the Citizen Podcast 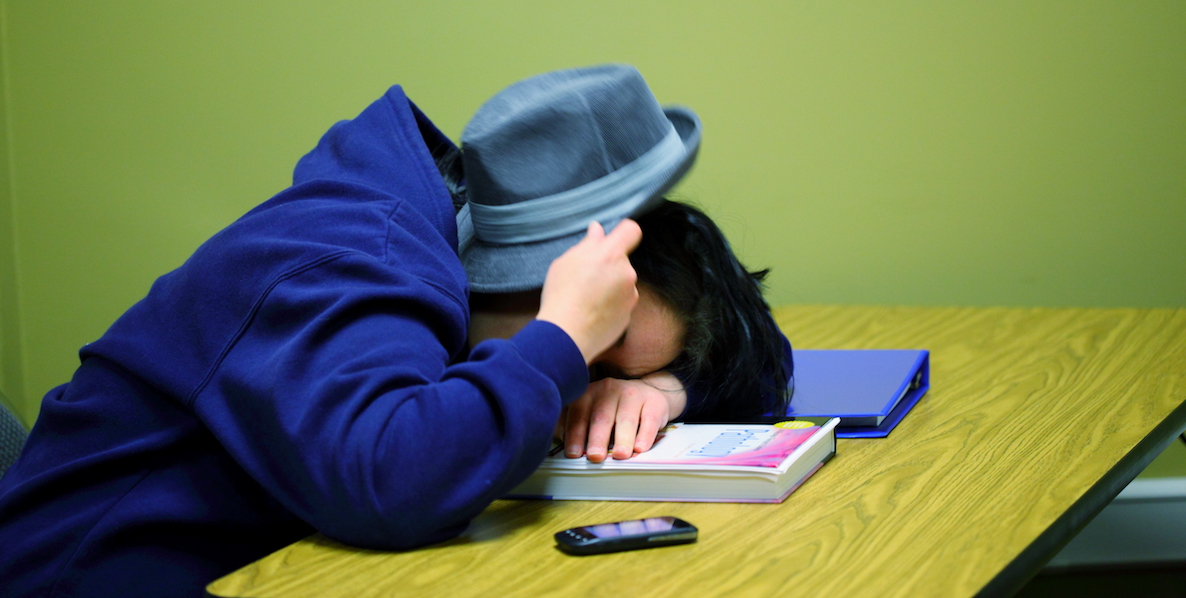 A Philadelphia principal points to an increasingly familiar culprit in the struggle to teach hard-to-reach students: Mental health issues

A Philadelphia principal points to an increasingly familiar culprit in the struggle to teach hard-to-reach students: Mental health issues

At no other time in my career has educational work been so difficult for teachers. Their resolve and dedication are tested every day. Though Philadelphia teachers are strongly committed to helping children succeed in school, teaching is hard work. Instead of instructing children how to read, write, and solve math problems, teachers face a challenge that makes many of them rethink their chosen profession: student behavior.

I joined this profession, in part, to further the academic achievement of incarcerated students and to help them improve their lives through education. My former students at the Bensalem Youth Development Center School, a now-closed juvenile detention center, included violent juvenile offenders, most of whom suffered from severe trauma and mental health issues.

In Philadelphia, officials estimate that at least half of students have experienced a major traumatic event, and some live with constant trauma. But nationally, according to a 2011 study, only 34 percent of teachers think they have the skills to handle mental health issues in their students.

I know a little about challenging student behavior. As my educational career evolved, and my knowledge about teaching and learning sharpened, I have held onto a quote from the late Wylie J. Hinson Jr., Bensalem’s principal: “It only takes one student to destroy and demoralize the learning environment.” He was right.

Unfortunately, too many teachers are denied the opportunity to develop authentic, trusting relationships with their students because of the high-octane levels of mental and behavioral health their students display. That was in evidence last year, when a group of teachers in Harrisburg—where at least 45 resigned between July and October—shared stories of getting beaten up by students as young as six. One elementary school teacher told a reporter that she had been kicked, punched, and physically restrained by one of her students. “Many minutes are spent each day dealing with violence that is happening in the classroom,” she said. “How am I supposed to have a safe, nurturing learning environment when this behavior happens?”

According to the Child Mind Institute, about 10 percent of the school population nationally—9 to 13 million children—struggle with mental health problems. In Philadelphia, officials estimate that at least half of students have experienced a major traumatic event, and some live with constant trauma. But nationally, according to a 2011 study, only 34 percent of teachers think they have the skills to handle mental health issues in their students.

In Philly, elementary schools are seeing a growing number of children with mental and behavioral health issues. My current school community is one example. Many students have been diagnosed with relationship difficulties, oppositional defiance, anger and aggression. Some throw tantrums for two to three hours at a time. Many also need multiple prescription medications or access to therapy sessions regularly throughout the school day to manage their behaviors, missing valuable instructional time. These distressed students struggle to follow basic instructions, and have difficulty focusing their attention on organizing, planning, and completing tasks. Unsurprisingly, their academics suffer as well.

At the same time, school districts, including Philadelphia, have engaged in new discipline reforms that limit the use of suspensions for conduct that could be linked to mental health disorders. That is for good reason: Suspension rates in the United States were nearly twice as high in 2006 compared to 1973, and racial disparities are acute. Black students are four times more likely to be suspended as white students, according to the Education Department’s Office of Civil Rights. That leads to students falling behind and—eventually—dropping out.

But keeping students with mental health disorders in the schools, and in the classroom, has its consequences, too, especially with increasing achievement and accountability demands on schools and teachers. A recent study from the University of Pennsylvania’s Consortium for Policy Research in Education found that teachers overwhelmingly think that suspensions helped them manage their classrooms.

An article that looked at Philadelphia school safety in The 74 Million, a nonprofit educational news site, explained the research this way:

More than 80 percent of teachers think suspensions are essential to send a message to parents about the seriousness of their child’s misbehavior, ensure a safe school environment, and encourage other students to follow the rules. About two-thirds of teachers believe that suspensions deter further student misbehavior.

That article and several others have delved into further research, from Penn’s Matthew Steinberg and Mathematica’s Johanna Lacoe which found that since the District banned suspensions for minor classroom infractions in 2012, truancy has actually risen in some schools, while academics among students not previously suspended have worsened. The study bore out my own experience that some parents are keeping their children home because they think the schools are not doing enough to discipline students who act out in class.

I’ve had seven, eight, and nine-year-olds, who have spent time in hospitalization placements, ask me why the school isn’t designed as a therapeutic environment. “Mr. Pelzer, why don’t you put in a rubber room?” said one child.

All of this makes clear that the need for something to replace draconian discipline is greater than school policies might admit. At my school, I’ve had parents tell me with relief as they drop off their children that it’s up to us to manage them for the day. And we do our best. We have counselors, teachers, parents, crisis response teams, mental health agencies, school-based therapeutic services, and other community partners collaborating to balance our academic culture and school climate. While I am very proud of this collaboration, we still struggle. Like many schools, we cannot respond to the high number of children in need.

And even the children know it. I’ve had seven, eight, and nine-year-olds, who have spent time in hospitalization placements, ask me why the school isn’t designed as a therapeutic environment. “Mr. Pelzer, why don’t you put in a rubber room?” said one child. In other words, they want a school that can reduce or eliminate stressors and provide resources that can accommodate both their learning and mental-health needs.

Research demonstrates that students who receive social, emotional, and mental health support achieve more academically. It is increasingly clear that if we want more progressive disciplinary methods, we need one or both of two things: More in-school professional help, which can be costly, or better training.

As school districts around the country realize the challenges, they are forging interagency partnerships. This appears to be the best strategy, for now. In Fishers, Indiana, for example, the Hamilton Southeastern School District passed a referendum to provide robust mental health services to its 21 schools, serving more than 22,000 students. In Los Angeles, the Los Angeles Unified School District (LAUSD) launched Student Mental Health Clinics and Wellness Centers, to promote and address the mental health and academic achievement of all LAUSD students.

In Philadelphia, schools are also taking steps to provide a multi-tiered system of support (MTSS), to address problems before they escalate—but access to adequate, school-based mental health professionals is limited. Still, researchers and academics have made understanding and training around trauma a priority here. In 2013, the city hosted the first National Summit on Adverse Childhood Experiences (ACEs)—a term used to describe trauma. Superintendent Hite’s Action Plan 3.0 called for teachers and staffers to learn how to recognize—and help—thousands of students experiencing trauma. And Mayor Kenney’s Community Schools Initiative has brought a renewed focus on this issue to at least a handful of neighborhood schools.

And more help may be coming. The Every Student Succeeds Act, the nation’s new federal education law includes funding for schools to invest in the mental and behavioral health of their students. That is good news for Philly teachers, and for their students. Let’s hope it arrives before we lose too many more good educators.

Hilderbrand Pelzer III is the principal of Laura H. Carnell School in Oxford Circle. He won the 2014 Lindback Award for Distinguished Principal Leadership, and is the author of  Unlocking Potential: Organizing a School Inside a Prison. Pelzer contributes regular columns from the school front lines during the school  year.