Learn more about its current projects here and how they work to engage with communities here.

MTWB is also always looking for donations and volunteers. Learn how you can lend a hand here. 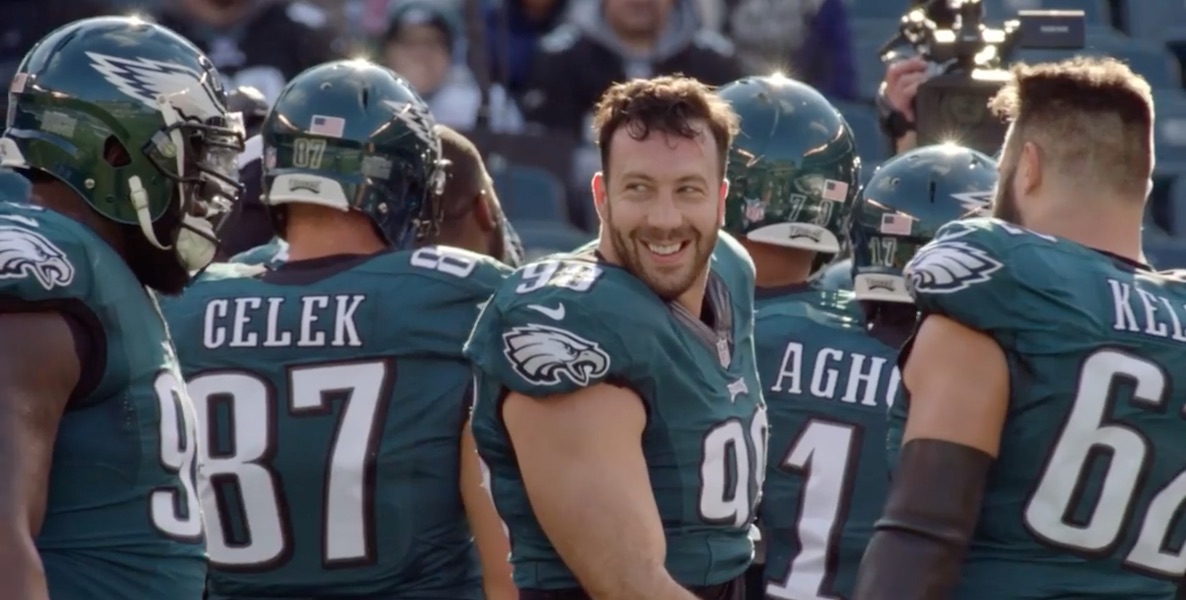 The former Eagle All-Pro has retired from the NFL. Given his unique array of talents, his biggest impact just might begin now

The former Eagle All-Pro has retired from the NFL. Given his unique array of talents, his biggest impact just might begin now

First off, let’s stipulate that athlete retirement is a really weird phenomenon. In what other industry do you “retire” in your early thirties, the precise moment the rest of us are just settling into adulthood?

Trained as prodigies and used to hearing packed stadiums chanting their names at the most tender of ages, pro athletes at the end often face an abyss: The very way they’ve defined themselves, and been defined, is no more. What could ever match the adrenaline rush of their youthful athletic exploits? “He had met the little death that awaits all athletes: He had quit,” writes John Updike in his legendary essay about Ted Williams’ last hurrah, “Hub Fans Bid Kid Adieu,” the ultimate tale of time waiting for no one.

Well, Updike had never heard of our very own Connor Barwin, whose retirement from football—announced on Instagram this week—flips the script. I haven’t been this excited about an athlete retirement since Charles Barkley hung up his Nikes back in the late ’90s, and that was only because it was accompanied by another in a long line of classic Barkley quips: “Now I’m just what America needs,” he said, “another unemployed black man.”

Barwin’s leave-taking from football is noteworthy for a different reason: What happens next is likely to be more interesting, and more impactful, than what came before. And that’s saying something.

On the field, as the tribute video below illustrates, Barwin was a tenacious fighter, an intense competitor, an inspiring teammate. But I’ve spent a good part of my adult life writing about those strange creatures known as professional athletes, and, having grown friendly with Barwin these last few years, (for two seasons, he penned the Citizen’s Civic Season column), it’s fair to say that, off the field, he’s long been our most interesting modern-day gladiator.

His thoughtfulness, his humility, his sense of the importance of community and citizenship, his love of all things city—our conversations have cited Jane Jacobs’ “feet on the street” theories far more than the X’s and O’s of Bill Belichick—all of it stands in stark contrast to the giant marauding linebacker we watched on Sundays. I once asked him about the juxtaposition: “Starting around the Friday before a Sunday game,” he said, “you don’t want to be around me,” conjuring up the tradition of locker room alter egos, the best example of which might be former Eagle Brian Dawkins, whose other ferocious personality—Weapon X—actually had its own locker.

Barwin has exhibited something the city desperately needs: What the late Jeremy Nowak and Bruce Katz refer to as “horizontal” leadership—a style of civic leadership that leads through collaboration and community empowerment, that convenes stakeholders, listens to them, and helps put them in positions to succeed for the greater good.

So why am I excited to witness Barwin’s next act? Because, as a nonpartisan community activist, Barwin has exhibited something the city desperately needs: What the late Jeremy Nowak and Bruce Katz refer to as “horizontal” leadership—a style of civic leadership that leads through collaboration and community empowerment, that convenes stakeholders, listens to them, and helps put them in positions to succeed for the greater good. If that sounds familiar, it’s because that’s what a coach does. Barwin has taken lessons learned through a lifetime in sports and applied them to public life. He has stumbled onto our most pressing civic need: Philly needs a coach.

Let’s take his Make The World Better Foundation, which ostensibly refurbishes inner city playgrounds, though it really does so much more. Its work is a testament to the curative powers of placemaking, but MTWB doesn’t impose—it listens. Four years ago, when Barwin and Barkley marked the launch of The Citizen with a public discussion about athletes and civic engagement, Barwin talked about how MTWB’s work rehabbing South Philly’s Ralph Brooks Park could serve as a model for lessening the tensions of gentrification.

“I don’t know the answer to gentrification, maybe someone smarter than me does,” he said. “But through the Ralph Brooks Park project, the hoop, the mural and the garden, we were able to, with a lot of help, create this respectful dialogue between the people who lived there for 40 years and the people who were just moving in. They came up with what they wanted to say on the mural, they started to plant flowers together, and have community meetings together. If anything, that’s how you can start to work through that gentrification process.”

Many athletes these days start charitable foundations, but for many it’s either a vanity play or characterized by modest ambition. A check is written, a party thrown. But Barwin, knowing the importance of personnel from sports, convened a roster of civic all-stars—including Urban Roots founder Jeffrey Tubbs and Executive Director Claire Laver— and has created something that, in increasingly fractured times, links citizens one to the other. It’s a model that can be exported to cities across the nation. (Excepting Dallas, of course).

The other fantasy a host of bold-face-name Philadelphians share—including a certain former governor—is that, once freed from the demands of NFL servitude, Barwin will one day run for public office. It’s not that far-fetched; athlete turned politician has become something of a trend, even here, where former Eagle Jon Runyan served two terms in Congress. (The aforementioned Barkley decided against running for governor of his native Alabama, telling me, “I don’t have skeletons in my closet. I have whole damn cemeteries.”)

No one knows for sure where Barwin’s new life will now take him, but maybe Philly’s not done cheering for him yet.

Tomorrow I turn 33 and after a decade of playing the greatest sport there is, I’m excited to say I’m moving on to the next chapter of my life. To my coaches, teammates, fans, and family – thank you all! It was a honor to compete on Sundays for the last ten years. Houston, Philadelphia, LA, and New York – couldn’t have dreamed of a better journey. Thank you for the good times and all the support! ✌????98