About gun violence as a public health crisis

In 2020, reporter Jo Piazza dove into the causes, effects and solutions to the gun violence crisis in Philadelphia, including looking at it as another health epidemic.

Listen here for what that means, and why it matters:

We hope to do that in our Good Citizenship Toolkit, which includes a host of ways to get involved in Philadelphia—whether you want to contact your City Councilmember to voice your concerns about rising gun violence, get those experiencing homelessness the goods they need, or simply go out to dinner somewhere where you know your money is going toward a greater good. 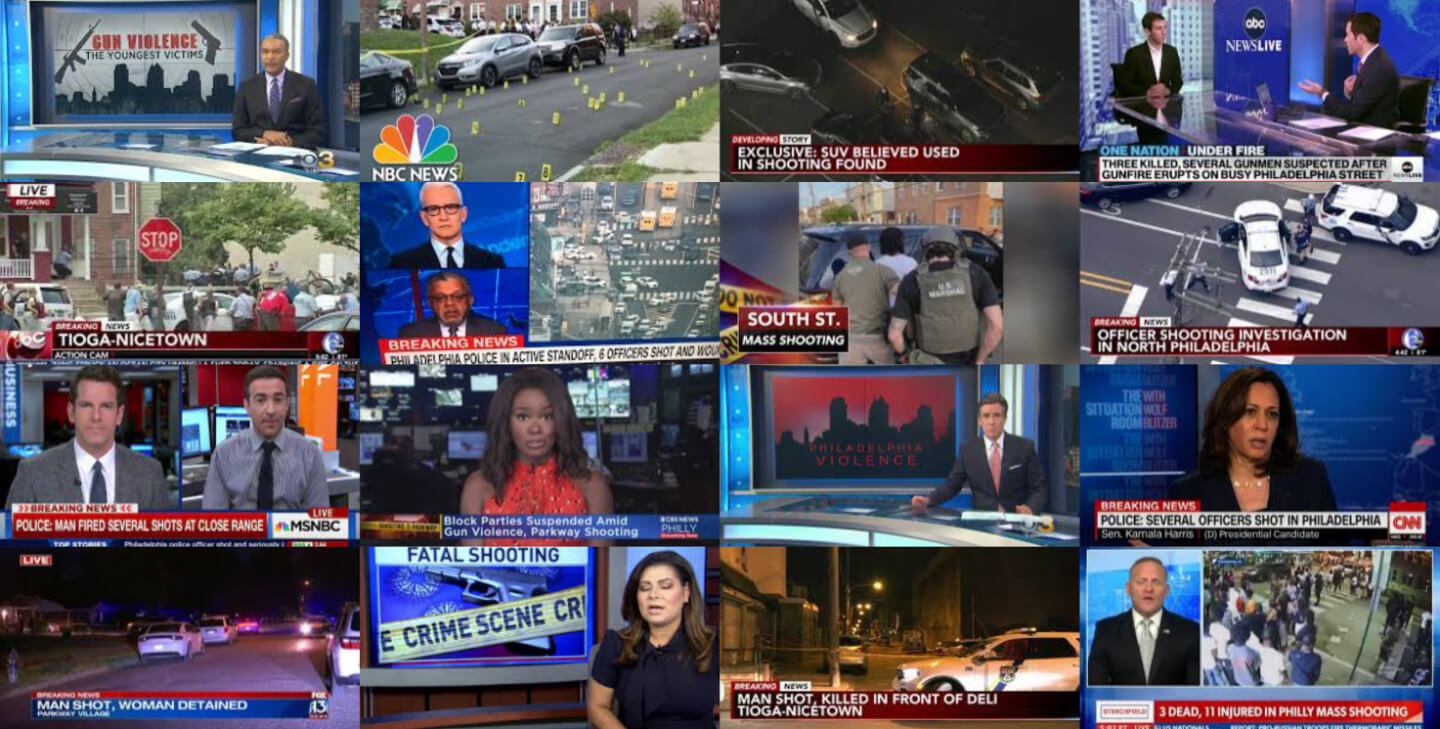 A study by a Temple trauma surgeon looks at the damaging effects of daily crime reporting on victims of gun violence. A bigger question remains: Would changing the news decrease shootings?

A study by a Temple trauma surgeon looks at the damaging effects of daily crime reporting on victims of gun violence. A bigger question remains: Would changing the news decrease shootings?

There are many things that contribute to our longstanding — and, now, record high — gun violence crisis in Philadelphia. Is one of those things…the media?

That’s the hypothesis of the Philadelphia Center for Gun Violence Reporting (PCGVR), a nonprofit founded by former Daily News photographer Jim MacMillan to explore the theory that changing the way news media portrays gun violence could lead to a reduction in shootings.

Now a group of researchers including Temple University trauma surgeon Jessica Beard, PCGVR’s director of research, has published a study that attempts to identify the effects on shooting victims of what is termed “episodic crime reporting: the daily catalog, without context and without comment from those involved, of shootings around the city.

The narratives we see now are harmful to Black communities. It’s time to rethink the structures around those stories to be helpful, or at least not make things worse.

The paper, published in the journal Social Science and Medicine Qualitative Research in Health, is called “‘Like I’m a nobody:’ firearm-injured peoples’ perspectives on news media reporting about firearm violence.” It analyzes interviews with 26 gun violence victims, most of whom were Black, who went through Temple’s hospital in 2021. Most said coverage of their shooting hurt them, increased their trauma and, in some cases, made them less safe.

This report hearkens back to earlier analyses of the news media, which — and Beard says in the introduction — found that episodic reporting “can undermine support for public health solutions, reinforce the ‘crime’ frame for firearm violence, promote stereotypes about the people and places impacted by this problem, and suggest an unfounded efficacy to policing responses as a means to prevent firearm violence.”

In Philadelphia, in particular, a 1998 study of our “if it bleed it leads” TV coverage by University of Pennsylvania Professor Dan Romer found that Black people were portrayed more often as criminals than crime victims on TV news — despite the opposite being true. In an Inquirer article last year, Romer surmised that this coverage — particularly when it implied Black people harming White people — was intentional, as it led to higher ratings and more advertising dollars.

To be clear, neither Beard’s nor any of the other studies have linked media coverage with increased gun violence. This report is a way to frame the connection that episodic journalism can have on the behavior and attitudes of those involved in shootings, as well as those who are watching it from afar. It is the first of several studies she and her team have planned to look at that connection.

I talked to Dr. Beard about the study and how journalism might be able to help — or at least not aggravate — the problem of gun violence in Philadelphia. This interview has been edited for clarity.

Roxanne Patel Shepelavy: Tell me about this study, and what it concludes about the reporting on gun violence in Philadelphia.

Jessica Beard: I’ve been a doctor for many years, and do surgery on firearms-injured people. I first got interested in the issue of media coverage of gun violence when I would try to explore two questions about my patients: What is the information about the victims? (Sometimes I don’t get to meet people I treat, so I wanted more info.) Also, I wanted to know more about the incredible high burden of disease we have around gun violence.

What I found was largely “episodic crime reporting.”

For someone for whom gun violence is very personal, a huge part of what I do every day, I thought that narrative is not at all a reality. It’s not what the real stories of gun violence are. Audiences watch this, and they’re not going to really understand the true problem and what they can do about it.

One thing posited by participants, for example, is this narrative around the way they were covered: “Man shot in North Philly.” Those types of narratives suggest that gun violence is inevitable, not preventable, and it makes people fearful. Making people more fearful leads to them arming themselves more. We know there was an incredible increase in firearms purchases in 2020 and 2021. And we know from the research on firearms that easy access to firearms makes the rate of gun violence higher. That’s a societal thing.

A couple of other immediate aspects that may be fueling the cycle of violence include naming the hospital they were taken to, and the condition of the patient. Shooters watch the reports to get status on the victim and location and that informs their activities. The people we interviewed identified those as real safety concerns.

And video, on social video or even TV, of the shooting or aftermath of the shooting can be traumatic. A gunshot victim making someone’s highlight glorifies the behavior.

Are you suggesting that news media shouldn’t report on shootings?

We’re talking in this research study about people who were injured, and were not involved in the narratives about the shootings. It’s reporting that made them feel unsafe, in distress and dehumanized. That’s unethical. That’s the most striking thing about this study to me. If you’re reporting on a shooting there should be some effort to contact the person who was shot.

I wonder what the value of episodic crime reporting on gun violence is. What is the purpose of that? We’ve done research on what shootings are covered and what are not. Only half the shootings make the news in Philadelphia; we’re not talking about comprehensive coverage, so it’s not all making the news, which is a rebuttal to the argument about making sure people are informed.

When the quarantine policy started in March of 2020, everything slowed down except for gun violence. We’ve doubled the rate of firearms injuries since March 2020. That’s extremely distressing, it’s not as though we have more resources.

Telling the stories of victims would shape people’s view of the issue. That’s a bare minimum. Also thinking about who are some alternative narrators other than police when it comes to gun violence. Solutions reporting on gun violence could explore root causes, and solutions.

That’s not easy in our current news environment. But we know the narratives we see now are harmful to Black communities. It’s time to rethink the structures around those stories to be helpful, or at least not make things worse.

I’m curious about the connection you are making between reporting and the rate of gun violence. How can changing how stories are reported change the number of shootings?

Over the last several decades, we’ve seen a shift in media narratives around suicide. Now, those stories always have a resource at the end. Jim [Macmillan] has had a long enough career that he’s seen a change — from when there were very sensationalized reports to attempts to minimize harmful and maximize helpful reporting. The World Health Organization even has about this.

Why has there not been a lot of research on this before?

One reason was the [20-year] congressional ban on CDC funding of any research on guns because it was seen as funding gun control. That is changing now, but there is still minimal funding for research on the disease of gun violence. Research needs funding, and unless there’s funding for that it’s not going to happen.

And the population largely affected are people who have been marginalized. We are now having a national conversation around structural racism, and people are interested in how media narratives around gun violence are contributing to depictions of Black people. The perspective of people who are most impacted by this have not been heard.

We’re using academic theory for this that says when you reach thematic saturation — hearing the same things repeatedly — you can stop doing the interviews.

It’s been incredible to get to talk to patients about something other than their health. I hope that what they shared will be heard by journalists.

We are just starting to look into where there are the missing gaps in knowledge. We have a portfolio of research projects that will look at other stakeholders: Victim’s family members; folks less directly-impacted by violence but who live in areas where gun violence is happening, journalists, folks who treat firearm-injured people.

The next one we’re doing is very laborious as well. We are doing a content analysis of local TV reports on gun violence from 2021. We collected over 7000 clips from local TV news, and we’re looking at 400 of them to see who are the narrators, and do they include some of the harmful content. So far, 80 percent are episodic reports.

You’ve been working as a trauma surgeon in Philadelphia for a long time and have seen gun violence skyrocket. Are you and your colleagues overwhelmed?

Unfortunately because we have this gun violence problem in the US, and here in Philadelphia, this is what we’re trained to do. We are very systematic about how we treat these injuries.

When the quarantine policy started in March of 2020, everything slowed down except for gun violence. We’ve doubled the rate of firearms injuries since March 2020. That’s extremely distressing, it’s not as though we have more resources.

Because of the rate, we have less time to recover after having to tell a mother that her child has died, or a shooting victim that they won’t walk again.

But honestly it’s extremely rewarding. I have incredibly strong and meaningful — brief or long — relationships with the patients I get to take care of. There’s nothing better than helping someone with a terrible injury survive and walk out of the hospital, seeing how incredibly resilient people can be, recovering from this trauma.

I also have a masters in public health, so while I have this one-on-one view, I’m also really interested in the health of communities and prevention of disease. Doing this research, it’s been incredible to get to talk to patients about something other than their health. I hope that what they shared will be heard by journalists.