Unless you’re over 65, an essential worker or have particular special needs, you may need to wait—a long time—before you can get a vaccine in Philly.

To find out when there’s a vaccine for you, sign up with the city’s Health Department here.

How long will vaccine immunity last? How much will the vaccine cost? How exactly does an mRNA vaccine work? CHOP’s vaccine Q&A page answers all your burning questions and more.

Watch the webinar held by the National Academies of Sciences, Engineering and Medicine to address the challenge of increasing “vaccine confidence.” Take time to make sure you’re informed, and then share what you know.

Ready to reserve your spot in line? Sign up with the city here. Will Philly Be Ready For the Vaccine Surge?

President Biden has promised that vaccine supply is ahead of schedule. Philly 3.0’s engagement editor wonders: Can Mayor Kenney and other leaders agree on a plan to get the shots in arms?

Will Philly Be Ready For the Vaccine Surge?

President Biden has promised that vaccine supply is ahead of schedule. Philly 3.0’s engagement editor wonders: Can Mayor Kenney and other leaders agree on a plan to get the shots in arms?

Two weeks after the political fallout from the ‘Philly Fighting Covid’ mess, anxiety continues to swell around the Kenney administration’s handling of the vaccine rollout, and this week an interesting leadership rift spilled out into the open, when a team including several City Council members, former Congressman Bob Brady, former Mayor John Street, and a few unions leaders announced an independent effort to open a mass vaccination site at Lincoln Financial Field.

Laura McCrystal and Ellie Silverman of the Inquirer have the details on what’s being proposed:

Several City Council members and other community leaders called Wednesday for Philadelphia to launch a coronavirus vaccination site at the stadium complex, and sharply criticized Mayor Jim Kenney’s administration for its vaccine rollout.

“Philadelphia has fumbled a bit along the way in working to get vaccinations out to our residents,” Councilmember Allan Domb told reporters at the South Philadelphia complex. He said he has contacted local companies and organizations in an effort to propose a better vaccination plan.

It was the latest blow in the political fight between Kenney and City Council amid fallout over Philly Fighting Covid, the self-proclaimed group of “college kids” who ran a mass vaccination site for the city before the partnership collapsed and drew embarrassing national headlines.

Philadelphia Health Commissioner Thomas Farley has said the administration doesn’t support using sports arenas for vaccinations because it may attract residents of surrounding counties and states and wouldn’t advance the city’s goals of ensuring racial equity in vaccine distribution.

Reasonable people can of course disagree about the merits of the Linc proposal along a few different lines, but what’s most interesting is what it says about the level of confidence in the mayor’s leadership on mass-vaccination that all these powerful actors from inside and outside government apparently all concluded that an independent effort was necessary to speed things up.

Perhaps critics of this independent effort have some better ideas than this for speeding up vaccinations beyond the Kenney baseline, in which case they should put forward some alternatives.

Related from The Philadelphia Citizen:
Getting Vaccines Right
The Philly Fighting Covid fiasco was an unforced error. Philly 3.0’s engagement director warns that it may force an overcorrection from city officials that we can’t afford.

One question worth stepping back to ask is whether it really is the case that Philly is moving too slowly on vaccination, or whether these politicians are making a big deal about nothing.

We aren’t mass vaccination experts by any stretch, so this isn’t a comment on any of the specific plans, but we can all look at the outcomes, which are being tracked by several media organizations.

Where things stand in Philly compared to other cities But Pennsylvania is 11th from the bottom of the list of the 50 states in the percentage of doses used, suggesting that we are doing considerably worse than other places at getting shots in arms quickly.

Governor Wolf acknowledges this is the case, as reported by the Inquirer, and says he’s looking into different ways to speed things up:

“Pennsylvania’s vaccine rollout “is going slower than any of us, all of us would prefer,” he said. “And that’s deeply frustrating to all of us, but especially Pennsylvanians who are in line and don’t know when they’re gonna get the vaccine.”

Despite Wolf saying earlier this week that he “wasn’t sure” that a centralized registration would improve the rollout, and Department of Health senior adviser Lindsey Mauldin saying definitively that Pennsylvania was not considering one, the governor said Thursday that “there’s nothing that’s off the table,” including centralized or regional registration systems.”

And then within Pennsylvania, Philadelphia is vaccinating residents at a much slower rate than the rest of the state. The city has received 202,174 first doses and administered 129,121 of those so far as of Thursday. 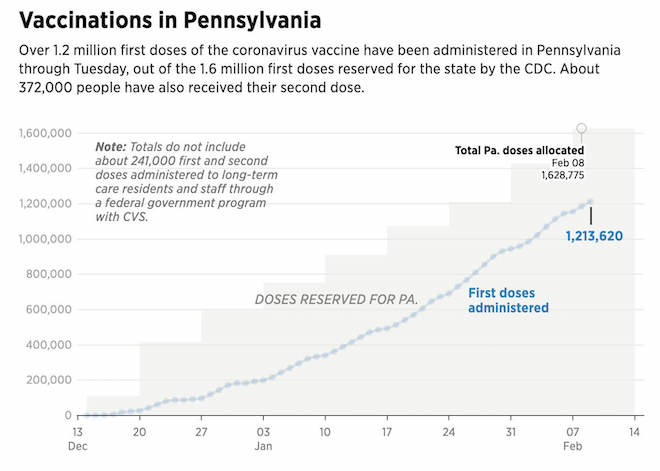 The week from February 3 through 9—the most recent full week we have data for— the city was averaging 2,886 vaccinations per day. According to Commissioner Farley, that pace puts us on schedule to vaccinate all Philadelphia adults by March 2022.

The City hit its current stride this time last month, when it reached the point at which 70 percent of all first doses received had been administered. In the subsequent four weeks, though, the process hasn’t sped up at all, and we’re currently still sitting on 30 percent of our allocated doses.

To be very clear, that doesn’t mean the remaining doses were wasted. But it does look like they’ve been keeping about a 30 percent supply buffer every week, and it’s reasonable to ask whether there’s a good reason for doing this and if it would be worth trying harder to shrink that buffer in favor of getting more people vaccinated each week.

This question will become even more important in the coming weeks and months, since the raw number of doses sitting in the freezer will start to balloon if we continue to use only 70 percent of the city’s ever-increasing allocation.

Percentage of Doses Used at End of Week

It’s important to take a moment to reject the false choice the Kenney administration is offering between distributing the vaccine quickly and distributing it equitably. Most of the politicians and officials involved in supporting the Linc effort are Black, and are genuinely interested in this as a way to help Black and brown communities get vaccinated faster.

The City can keep prioritization simple, while also putting the communities first where Covid-19 has spread the most, which the data show is disproportionately in Black and brown communities. The public health needs and the racial equity needs all point in the same direction and are not at cross-purposes. What’s needed is more efficient and effective public health infrastructure for conducting a mass vaccination, and can quickly scale up as more doses become available.

Related from The Philadelphia Citizen:
Jim Kenney’s Very Bad Week
Between a devastating report by Controller Rebecca Rhynhart and his administration’s fumbling of the vaccination rollout, it’s no wonder the mayor has floated the idea of cutting bait and running for the Senate

That is not as far off as it may seem in mid-February, at least according to the Biden administration’s recent announcements.

Dr. Anthony Fauci said Thursday that by April it could be “open season” for vaccination for all comers, by which he means anybody could start to book an appointment. And President Joe Biden announced the same day that the United States has secured 600 million doses of vaccine to be administered to most Americans by July, he said, a month ahead of schedule. And the pace could pick up more if the Johnson & Johnson vaccine is approved by the Food and Drug Administration.

Biden announced on Thursday that the U.S. had secured contractual commitments from Moderna and Pfizer to deliver the 600 million doses of vaccine by the end of July — more than a month earlier than initially anticipated.

“We’re now on track to have enough supply for 300 million Americans by the end of July,” he announced.

By most indications, the amount of vaccine doses that Philadelphia is receiving should be increasing pretty quickly in the near future, so it’s an important conversation to be having about whether the Kenney administration’s strategy will be sufficient to handle that influx, or if other approaches are needed to accommodate a faster pace.

The Linc move is the work of a coalition of elected officials trying their best to figure something out, and putting to good use their relationships with our major institutions to enlist them in the effort to speed up vaccinations, and these entreaties are reportedly well-received. Meanwhile, the mayor’s office is lashing out at critics using over-the-top defensive language, without acknowledging the problem.

The point isn’t that this is exactly the right venue or exactly the right approach, but that the situation calls for some urgency to step on the gas and scale up our capacity to distribute a surge in doses we know will be coming soon. Philadelphia is currently one of the slowest areas of the one of the slower states in the country, and the politicians who are focused on trying to shift us onto a much faster track have the right attitude.