Organize your own “game day conversation”

Invite a group of friends to come watch a Philly sporting event…and ask each friend to bring along one person you don’t know. During halftime, gather everyone together and pose the kinds of questions Baltimoreans explored—from city and sports trivia to deeper issues of gentrification, employment, community service, and more.

Combating Youth Poverty Through Jobs Program
In this Solutions of the Day, Nashville borrows a successful jobs program from Boston for youth in poverty to help the struggling demographic.
All the Right Rights
The Rendell Center’s annual citizenship contest asked what the First Amendment means to fourth and fifth graders across the region. Their answers gave hope for America
Ideas We Should Steal: Action Civics in Schools
A new Massachusetts law mandates experiential civics learning in school. It’s one way to ensure a better democracy in our children’s future
"We Are the World Changers"
Young people experiencing poverty from all over the world came to Philly to find solutions to their joint plight. Can they be the answer we’re looking for?

In the students' own words

Learn more about the reporting collective

Let’s Win This One
BROKE in Philly launches today with 19 media outlets committed to shedding light and finding solutions to the city’s biggest scourge: Poverty 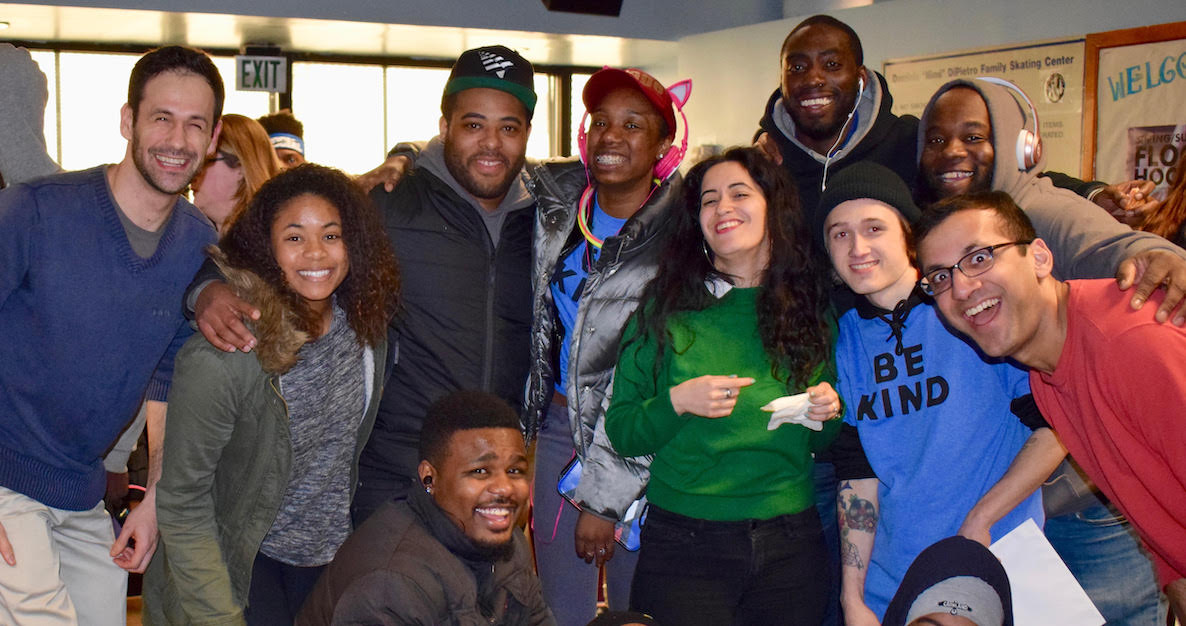 Could a Baltimore nonprofit hold the answer to turning around the lives of Philly’s most at-risk teens—and our city at-large?

Could a Baltimore nonprofit hold the answer to turning around the lives of Philly’s most at-risk teens—and our city at-large?

In underperforming high schools in Baltimore, many students in the lowest 25 percent of their freshman class have only a 6 percent chance of graduating. Kendall Jamison should know: In 2004, he was one of those students, struggling to make the grades he needed to stay on the football team at Baltimore’s Dunbar High School.

Jamison had always enjoyed school. But at age 14, he was facing challenges far outside of his control. “It was a transitional period. I was growing up in a single-parent home, my mother was moving in and out of the state for rehab and trying to get her life together. I had two uncles who helped raise me, but they were also getting their lives together. And my peer groups weren’t the best people to hang with at that time,” he says.

The key to Thread’s success is the length of the commitment: When students join, they sign an agreement to commit for 10 years—four during high school, and six thereafter. 100 percent of students stay in the program.

Jamison relied on school for breakfast and lunch, and ate McDonald’s or Burger King for dinner nearly every night. He had caring coaches who helped with food and rides when they could, but they too had only so much bandwidth. “There just was not a lot of parental supervision,” Jamison recalls. “I was responsible for getting myself to and from school every day, handling my own grades, and also feeding myself.”

That combo of nonexistent parental support and friends who attracted trouble could have set Jamison on a path that’s disproportionally common among African American men in Baltimore, Philly and cities nationwide: unemployment, incarceration—or worse. Instead, with his eyes on football and college, Jamison applied to join a then-new program a friend had told him about, called Thread.

“Thread is a movement to unite people across lines of difference all across Baltimore into meaningful relationships,” explains Susan Hughes, Thread’s senior director of communications. “And the way we bridge that divide is by rallying around our young people.”

Thread matches students from the lowest 25 percent of the freshman classes at some of Baltimore’s most underperforming schools with an evolving network of up to four Thread volunteers—for 10 years. Where many programs—Philadelphia Futures’ College Connection program, for example—focus on students who are already showing academic promise with a GPA of at least 3.0, Thread’s incoming freshmen have an average GPA of .87.

Sarah Hemminger, in 2004 a PhD candidate at Johns Hopkins University School of Medicine, co-created Thread in response to her own sense of isolation at the time—and with the inspiration of her husband Ryan, Thread’s co-creator, who had transformed from a failing high school freshman into a U.S. Naval Academy grad, thanks to the intense support of teachers who rallied around his every need.

Thread’s efforts go beyond the classroom or college-readiness prep, where programs like the School District of Philadelphia’s 9th Grade Academies, by contrast, concentrate their efforts. “We do that—but the ‘extended family’ we create is really to serve as a family,” Hughes says. “These are people who will do your laundry if your clothes are dirty because you might not want to go to school smelling, or pack your lunches, or call you and give you a hard time because you haven’t been to school in a week. It’s not always going to be easy, but it’s the consistency of the connection that’s critically important in gaining trust. Once you can trust, then you can start to really develop a relationship.”

Jamison recalls the tutoring as well as being tasked with community service—reading to kids, serving meals on holidays—that, he realizes in hindsight, kept him from getting into trouble. He also recalls Hemminger always having his back: “She would bring food to our homes, speak to teachers on our behalf, introduce us to employers,” he says.

Now in its 14th year, Thread doesn’t just have a feel-good mission; it boasts the kind of staggering outcomes that should make our city—where, according to a 2018 report by the Philadelphia Education Research Consortium, one-third of freshmen are projected to not graduate on time—take note.

Sixty-five percent of Thread students—many of whom are the same ones who are otherwise given just a 6 percent chance of graduating on time—complete high school in four years; that number goes up to 87 percent when accounting for students who need six years to finish. 83 percent get a four- or two-year degree or certificate—a milestone that, as noted in a 2015 Lumina Foundation report, provides ample individual and societal benefits: increased job security, improved health, longer life expectancy, as well as decreased likelihood of incarceration or reliance upon expensive credit. While not a panacea, college can be a ticket out of the generational poverty burdening urban youth nationwide, and in Philly in particular.

To date, Thread has engaged 415 students, and more than 1,000 volunteers. The majority of volunteers come from the region’s universities—Hopkins, Morgan State University, and Towson University—and Thread is eager to pull from pools of community-minded local employers as well. Volunteers are not required to commit for 10 years; an evolving approach to Thread families, wherein in years 5 through 10 the family consists of two volunteers and two students, ensures that no student is left stranded.

“One of the most important lessons I learned was not to judge a book by its cover,” Jamison says. “When I joined Thread, all of the volunteers were Asian or white. And my friends and I didn’t take them seriously, because we didn’t think we had anything in common.” But over time he was proven wrong, and realized how much these volunteers could teach him. “To talk about their failures and their successes, to talk about student loans and the debt of paying loans back—it all helped prepare me,” Jamison says.

The key to Thread’s success is largely the length of the commitment: When students join, they sign an agreement to commit for 10 years—four during high school, and six thereafter. One hundred percent of students stay in the program—though at some point, nearly all of them try to quit. “There can be times when people kind of fall off and they’re not reachable. Or they have a bad year and then they have a good year. Or they decide to work and not go to college for a couple of years, and then they decide to go,” Hughes explains.

Jamison can relate: “When I was 19, I was disengaged [from Thread]. I wouldn’t answer their phone calls. I’d think, ‘I’m almost an adult, I don’t need these people coming to help me with my college classes, this is kind of embarrassing.’ But like a parent, Thread never gave up. And I humbly came back asking for help with mock interviews and [networking] as I was applying for jobs.”

Running on an annual operating budget of just over $5 million, more than 70 percent of Thread’s budget comes from local and national foundations. And for now, Thread has no plans to expand to other cities. Its bigger focus is on expanding within Baltimore, from reaching the 2.6 percent of Baltimore freshmen currently in its program to 7 percent of all Baltimore city freshmen.

In the spirit of their bigger-picture mission of strengthening the fabric—the threads—of the city, they’re also striving to connect disparate communities beyond schools; a recent “Game Day Conversations” event saw more than 500 people meet up at one of 23 locations around the city to watch a Ravens game and have guided talks about meaningful issues like gentrification, industry, relationships, and more.

As for Jamison, he went from the bottom quarter of his class to graduating from Dunbar and then Morgan State University. After spending five years in banking and sales, he pivoted: He’s now in charge of community growth at none other than Thread. “Thread is a family. It’s that unconditional support and love that I believe can change anyone—just knowing that someone actually cares, knowing that there’s a network of people supporting you who will never shun you. And it’s that unconditional support and love that has me working here today, trying to replicate that [experience] for students coming behind me.”