Philadelphia needs more great education options like Southwark Elementary.  Click below to learn how you can help improve Philadelphia’s schools.

What the experts say about language immersion programs 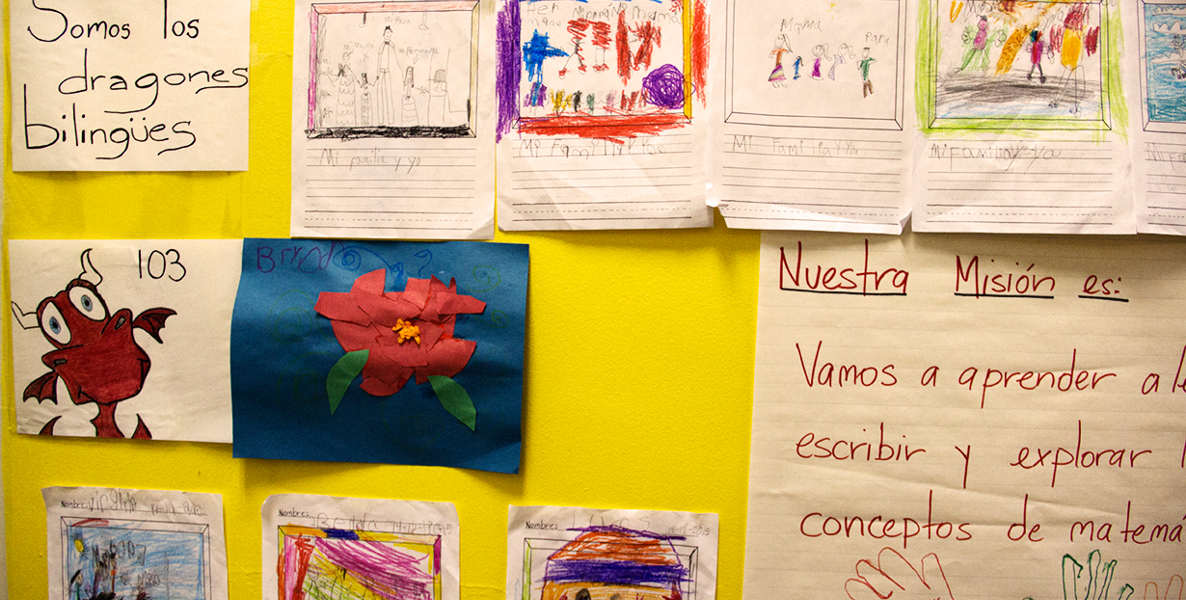 Are bilingual immersion programs, like at South Philly’s Southwark, a way to save city schools?

Are bilingual immersion programs, like at South Philly’s Southwark, a way to save city schools?

Ane Ormaechea looks a bit like a mime when she’s teaching. She dramatically uses her hands to illustrate concepts like addition and subtraction, acting out “combining” and “separating” two imaginary groups of objects by pointing to numbers or pictures she drew on the board before class.

“I make things very visual for them,” Ormaechea notes.

She has to—because she’s teaching in Spanish. Ormaechea is the bilingual kindergarten teacher at Southwark Elementary School in South Philly. She speaks and teaches almost completely in Spanish. Half of her students are native Spanish speakers and the other half native English speakers, most of whom had no prior exposure to Spanish before starting Southwark’s dual-language immersion program in September.

At the start of the year, Ormaechea strategically placed the students’ desks in groups of four, with two Spanish speakers and two English speakers in each group so students could ask each other for help when they don’t understand a word or a sentence she says. At first, many of her English-speaking students understood what was going on only by the consistency of Ormaechea’s daily routine and by looking around for cues from their peers. By now, the end of the school year, the native English students are following along and answering Ormaechea’s questions in Spanish. The students, meanwhile, talk to each other in a seemingly confusing, yet fluid, combination of the two languages.

“You have this huge movement of parents supporting city schools and wanting those schools to be strong, and then you have a large and involved immigrant population who have actively chosen to come to Philadelphia,” Lukov says. “Parents understand the value of learning another language and immigrant families understand the richness of those cultures.”

Southwark is part of a resurgence in Philadelphia of bilingual education, which could bring renewed energy to local public schools while also equalizing the state of education citywide. Recent research on bilingualism has shown that students who participate in two-way immersion programs perform better in both languages than their peers by the time they reach middle school, receiving higher test scores and more easily deciphering complicated tasks. Additionally, two-way immersion programs have proven effective in eliminating the achievement gap between English-speaking students and English Language Learners, and Philadelphia, particularly South Philly, has a lot of ELLs.

What makes the Southwark program work is the surrounding community’s commitment to it. To be successful, classrooms need about an equal number of speakers from both languages, which means that the program needs to attract both Spanish-speaking families—in the neighborhoods surrounding Southwark, the vast majority of Spanish-speakers are Mexican immigrants—and English-speaking families, who in this neighborhood are largely white and middle class.

When Southwark principal Andrew Lukov started at the school three years ago, he met with various community groups and parents, asking them what they wanted to see out of their neighborhood school.

“You have this huge movement of parents supporting city schools and wanting to move back to the city and wanting those schools to be strong, and then you have a large and involved immigrant population who have actively chosen to come to Philadelphia,” Lukov says. “Parents understand the value of learning another language and immigrant families understand the richness of those cultures.” As a former ESL teacher who also managed ESL programs at the District level, Lukov felt that this was a community demand that he actually knew how to fulfill. A year later, Southwark welcomed its first cohort of kindergarteners into their new two-way immersion Spanish program.

According to Nelson Flores, a researcher at Penn’s Graduate School of Education and the primary investigator of the Philadelphia Bilingual Education Project, Philadelphia was on the forefront of bilingual education in the United States in the 1970s. At the time, Philly had whole schools that were bilingual, like Potter Thomas in Fairhill, which was a nationwide model of bilingual education, and specific bilingual classrooms for students who were Spanish dominant. Most of these initiatives targeted Philadelphia’s large Puerto Rican population, although other foreign language programs, notably Chinese, also came in and out of favor over the last four decades.

The decline of these programs in Philadelphia was largely tied to a shift in local and national attitudes towards bilingual education, budget shortages, availability of Title VII funding and the “English-only” movement in the 1980s. Since its surge in 1960s and 1970s, it has fallen in and out of favor.

“Philadelphia has a habit of bringing these things, and then there are cuts that happen, and then they go away,” says Flores, “and then now there is kind of like a birth, again, of dual language enthusiasm in the school district.”

Today, Southwark is one of six public elementary schools in Philadelphia that have launched dual-language immersion Spanish programs in the last two years, and the only one that did not have a pre-existing Spanish program. The others—Cayuga Elementary and Alexander McClure in Hunting Park; Lewis Elkin Elementary in Kensington; and Muñoz-Marin and Bayard Taylor Elementary in North Philadelphia —had transitional Spanish language programs, for students learning English, that were recently converted into two-way immersion programs. Among charters, Independence Charter School in Bella Vista, has one of the city’s most successful Spanish immersion programs.

Southwark uses a “90-10” model: Starting in Kindergarten, the students are taught in Spanish 90 percent of the time and in English 10 percent of the time, for  special classes like art and music. As the students get older, each grade sees an increase in English teaching and a decrease in Spanish. Since the program is only in its second year, they currently have both a kindergarten class, taught by Ormaechea, and a first grade class. A class is added each year.

Recent research on bilingualism has shown that students who participate in two-way immersion programs perform better in both languages than their peers by the time they reach middle school, receiving higher test scores and more easily deciphering complicated tasks.

Kristen Dama, an English-speaking parent, said that while she had always hoped to send her daughter to their neighborhood public school, she was shopping around before registering for kindergarten at Southwark. “This program really sealed the deal,” she says. “We were swayed by all the research about two way immersion programs and how kids’ brains expand when they are learning language and it really helps academic development.”

Dama is also trying to give her child the opportunity she wished she had. “I am a public interest lawyer and I don’t speak Spanish and I am at a disadvantage in my work,” said Dama. “If this is something I can give to my kid, I definitely want to.”

For Spanish-speaking families, the immersion program allows them to preserve family and cultural heritage, while their children learn English well so they can succeed in the U.S. And research shows that Spanish speakers in immersion programs learn the language easily, and succeed better in school moving forward.

Demand for spots in Southwark’s next bilingual kindergarten class is greater than the availability, something that seems to point to a larger need among city parents.  Allison Stills, Deputy Chief of Office of Multilingual Curriculum and Programs for the District, says she gets requests for information about bilingual programs almost weekly. Lukov and other advocates say the innovative model is one factor driving more parents to their neighborhood public elementary schools.

But whereas in the 1970s, Philadelphia was a leader in the national conversation about bilingual education, the city has been slower to get onboard in recent years.

“We are no longer in the lead,” says Flores. “Other cities like New York have explicitly taken on the task of expanding dual language programs and also expanding into languages that oftentimes haven’t had bilingual programs before. Even in districts like Houston, where the programs are really Spanish-English, there are still far more programs than there are in Philadelphia.”