Have an opinion on this story? Click here to get in touch with the Mayor’s office or here to contact your City Council member and have your say!

Is Tax Reform an Attack on Cities?
If the Republican tax plan becomes law, it could mean the end to urban development as we know it
Reality Check: Another “for the kids” tax?
WURD’s afternoon host warns of the possible consequences of local school board control: More taxes on the poor
At What Price Soda Tax?
A recent TV investigative report of the city’s pre-K initiative raises questions about just what it means to be progressive in Philadelphia
Reality Check: Welcome To Sin Tax City
WURD’s afternoon host says state legislation to expand gaming and privatize liquor sales would harm Phliadelphia—but help lawmakers' pocketbooks

See the budget in brief

Ellison breaks it down the 2018 budget pretty clearly, but take a look for yourself in “The Mayor’s Operating Budget in Brief for Fiscal Year 2018” for deep dive. 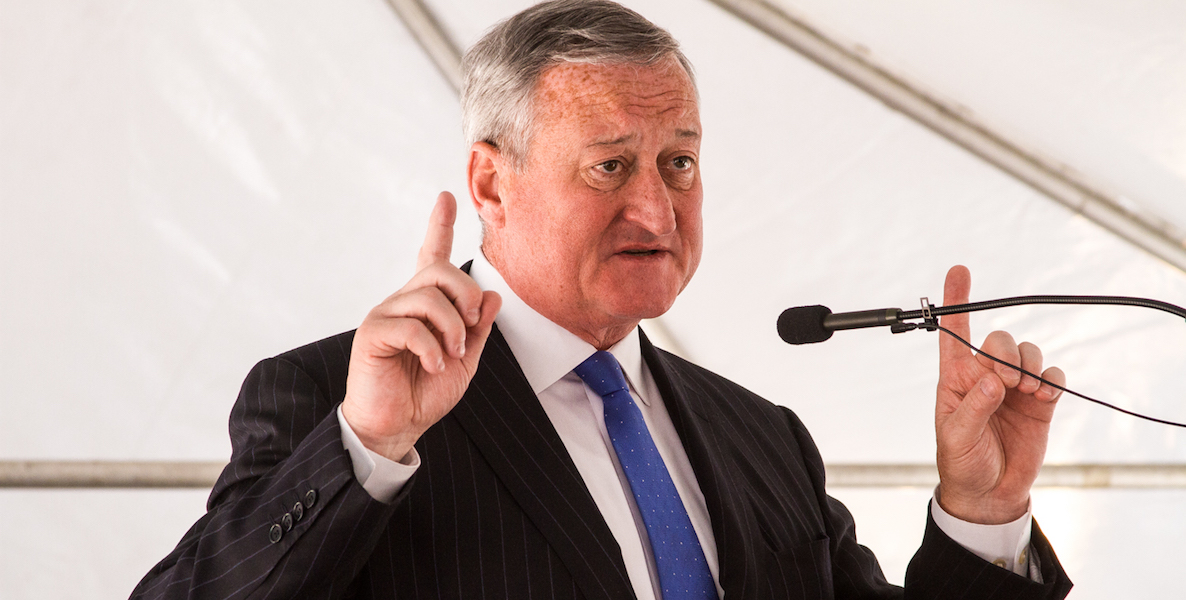 No Philadelphia public official governing in this era should, in good conscience, rail on about the combined tag-team evils of the Trump administration and Harrisburg while—simultaneously—oppressing their own city residents through badly woven policy.

Yet, Mayor Jim Kenney appears to have done just that with his recent Fiscal Year 2019 budget.

Indeed, on the surface, Kenney is an affable, outgoing and gregarious South Philly pol who loves forging solid coalitions when it’s time to get reelected. By all accounts, he means well. Philly kids, described as “underdogs” by the Mayor (he can’t even resist co-opting Eagles’ metaphors), are showered with all types of talking point love in the form of sweetened beverage taxes. Philly’s perpetually distressed black population gets a long awaited Octavius Catto statue and Kwanzaa lights at Boathouse Row. There’s always a trove of nicely packaged photo-op-worthy public gifts for the city’s assorted demographics, and one always walks away with an afterglow of Philly pride following a Kenney production.

Feel good you must, but that doesn’t mean you’re really getting anything truly progressive or life-enhancing out of it. And that’s exactly what his budget proves with its proposed 6 percent property tax increase, along with an increased real estate transfer tax. It demands, as he even admits, “sacrifice” from residents, but nothing other than smoky magician-on-stage promises about funding a broke ass school district and a bloated pension system taking up large increases for the projected $4.7 billion in spending. Police, fire, pensions and employee benefits at $2.32 billion combined are, easily, eating up nearly half of the general fund.

A deeper reading of the budget shows rather negligible investments in community revitalization or poverty-busting growth other than those obligatory “I’ve-checked-the-box” classic liberal commitments.  But there’s nothing really creative from this budget. Nothing trailblazing that says he truly understands Philly is still the nation’s poorest big city. If he knew that, he wouldn’t even mention the need for “sacrifice,” as if residents aren’t already doing that every day. Being creative would suggest the creation of revenue generating initiatives that don’t tax any more than you already have.

Instead, the proposed tax hike not only represents a further breach of expectations, but it also indicates intellectual laziness. Like, really, that’s all you got, Mayor?

Being creative would suggest the creation of revenue generating initiatives that don’t tax any more than you already have. Instead, the proposed tax hike not only represents further breach of expectations, but it also indicates intellectual laziness. Like, really, that’s all you got, Mayor?

Immediately posturing to counter any criticism, the Mayor quickly jumps to his usual “for the kids” pitch, a predictable shield in times of trouble when the headwinds get too strong to manage.  At this point, it’s timeworn and downright gimmicky, the butt of a joke everyone gets because we understand the hustle now. It’s so bad that when he walks into the figurative room, we’re still laughing and he doesn’t know what’s so funny. Still, he keeps pressing with that, hoping residents will blindly follow.

That a property tax increase is even being considered is offensive. Proposed as a way to plug nearly a billion dollars in school district red ink over five years, City Hall clearly thinks it can slip that by without a conversation on the property tax abatement.  Why exactly are struggling residents, many low-income and barely able to keep the homes they have, being asked to weather another round of property tax increases when the abatement is still in effect?

But it seems the only way the Mayor knows how to make money is by hustling more of it from residents; in fact, residents are expected to cover almost 90 percent of the budget lift. The property tax increase will supposedly raise $475 million, the transfer tax $66 million and wage taxes $340 million for a combined $880 million contribution of shared sacrifice by residents; the city’s general fund would kick in an additional $100 million to cover the projected $980 million school district deficit over five years.

It would be easy to digest the tax increases if the city really couldn’t turn elsewhere for revenue.  The problem is that it most definitely can–and very easily. In fact, there’s more than $1.33 billion in revenue over five years the Kenney administration weirdly ignores in favor of tax increases that raise about $353 million less than that.

The Mayor is actually leaving money on the table that already belongs to the city.  If he wanted, there are three fairly simple steps to guaranteeing a filled budget by 2023 … without taxing residents a dollar more.

First: There is the matter of the $78 million owed by the Philadelphia Parking Authority to the Philadelphia School District discovered by the Pennsylvania Auditor General in a recent audit.  When Reality Check asked the Mayor about that last month, he claimed that “arrangements were being made” to secure those funds. Yet, a check hasn’t been cut yet and longtime City Hall observers privy to conversations between the Mayor’s office and PPA suggest the latter agency has no intention of disbursing those funds—not even on a payment plan.

Second: At a minimum, the PPA should be paying the city’s school district about $35 million per year, according to Auditor General Eugene DePasquale when he talked with Reality Check back in December. If that’s the case, the city stands to make at least $175 million over five years towards that budget hole.

Third: As the Pew Charitable Trusts found in its study of Philadelphia’s business taxes, the property tax abatement and other incentives have deprived the city of $216 million in revenue each year. That’s from an estimated $110 million lost annually due to the property tax abatement and $106 million annually from various business tax incentives. There are, of course data suggesting other business-related taxes, like an increased sales tax and wage tax from a growing population can make up for at least some of that. A report by Drexel University’s Kevin Gillen points out that the abatement has led to unprecedented growth, such as the more than 400 percent rise in new building alone since abatement took effect, especially in and around Center City, and that expired abatements have started bringing in increasing amounts of revenue each year—on properties that are high value.

It would be easy to digest the tax increases if the city really couldn’t turn elsewhere for revenue.  The problem is that it most definitely can and very easily. In fact, there’s more than $1.33 billion in revenue over five years the Kenney administration weirdly ignores in favor of tax increases that raise about $353 million less than that.

But, in some ways, relying on the property tax abatement as a major business model—the most generous of its type in the nation—is like relying on a Wall Street bubble; at some point, that balloon will get unsustainable and likely pop. There may be more buildings and more businesses conducting operations in Philly, but that should never be the sole measure of true city-wide progress.

And it’s still an unfair arrangement of two vastly different tax bases; it might be helping relatively well-off or new middle class homeowners and expanding businesses, but it’s not doing anything other than creating additional headaches (and income gaps) for low-income Philadelphians trying to stay in their homes. We can’t have two, unequal tax systems where the group that can afford it doesn’t get taxed while the one that can’t afford it does get taxed. What good is growth when you’ve still got a city saddled with deep poverty? At the very least, the city should be immediately overhauling or expanding it to all homeowners in a way that’s equitable.

Look at that: Already, we made the city more than $1.3 billion and we didn’t even touch other sources of potential savings or cash. And we didn’t even consider revenue sources such as the $400 million in uncollected taxes from nearly 69,000 buildings in the city, nearly two thirds of which are either landlord-owned rentals or commercial structures. Let’s not forget the nearly $80 million in so-called “soda tax revenues” for Pre-K.

Nor have we proposed cutting city workers from the payroll, or slashing pension contributions or anything disruptive to working city government families. We understand they’re consumers who contribute to the local economy, too, and that any major cuts to the municipal workforce only create disastrous ripple effects throughout the city and surrounding region.

Whether this tax is approved ultimately depends on the mood of City Council. In some ways, delivery of the budget address is evidence the Council is actually considering it—why else would the Mayor feel so comfortable openly proposing it? Plus: the several Council members who’ve been asked whether or not they’d support a property tax increase on WURD’s Reality Check have played both sides of the answer.  If that’s the case, it’s a travesty to average Philadelphians who shouldn’t have to worry about their respective Councilmember selling them out. In an ideal world, residents should keep a watchful eye on this debate as it unfolds and assess who’s supporting the increase. Council would be wise to reconsider and outright reject this proposal, and that includes any negotiation to reduce it.