If you want to try your hand at beekeeping, the Philadelphia Beekeeper’s Guild has plenty of resources to get you started.

Plant a pollinator garden (or window box if you’re tight on space) or request the city plant a tree on your block and help increase the available pollen and nectar for Philly’s bees.

You can also support the many urban farms that provide food and habitat for bees.

Watch a film about the plight of bees

It’s hard out there for a bee. If you want to learn more about their struggles (and how lots of sticky sweeteners labelled as honey are actually not pure honey at all) watch the first episode of the Netflix documentary series “Rotten: Lawyers, Guns & Honey.”

To save bees the tasty way

Support local beekeepers who are taking care of our pollinators by tasting the fruits of their labor. The world of honey is a vast and complex one, much like beer, wine or cheese.

Where the bees gather pollen and nectar, and from what plant, can create wildly different flavors. Clover, acacia, orange blossom and buckwheat all create starkly different honeys.

You can get the good local stuff from Keystone Colonies, Instar Apiary, MOM’s Organic Market, Weavers Way Co-op, and many local farmers’ markets. 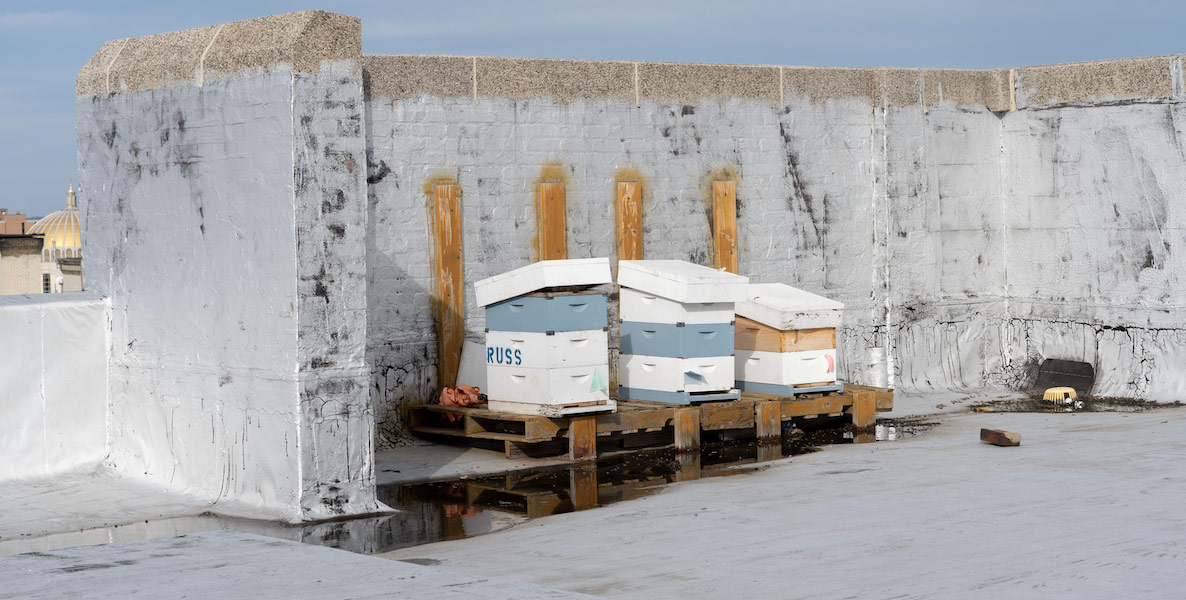 Protecting bees is critical to preserving our food supply. Some 50,000 rooftop bees, including ones in the evolving Spring Arts District, are doing a small part of what Philly needs

Protecting bees is critical to preserving our food supply. Some 50,000 rooftop bees, including ones in the evolving Spring Arts District, are doing a small part of what Philly needs

A sign at the roof access to 990 Spring Garden Street reads “Please Beware of Bee Hives.” It certainly sounds threatening, but out on the roof, it’s relatively tranquil—no swarms. High above the traffic of Spring Garden, a beekeeper’s colony sits quietly, tucked in a far corner of the roof. The bees come and go, bringing pollen back to the hive mostly from the trees and plants growing below along the Reading Viaduct.

That’s not to say urban beekeeping isn’t adventurous at times. “The most challenging part of urban beekeeping is getting equipment and supplies up and down from the roof,” says beekeeper Mike Gonzales, who keeps about 50,000 bees on various city buildings, including here. “Sometimes I have to move bees from one office building to another so it’s challenging to do this without any bees ending up in people’s cubicles.” At 990 Spring Garden, Gonzales says he’s had to get beekeepers insurance. “It’s expensive, but fortunately I haven’t had any disasters where I needed to file a claim.”

Anyone who farms or gardens knows how crucial pollinators are for the food supply and our basic survival. By some estimates, pollinators are responsible for one out of every three bites of food we take. Yet there is a world crisis in which bees and other pollinators are being decimated, almost apocalyptically. In 2015, the Obama administration recognized that pollinators “are critical to the nation’s economy, food security and environmental health.” Sadly, according to an article on CityLab, the Trump administration has lifted bans on a number of pesticides that are toxic to bees.

“I like the idea of sending 50,000 bees out every day to trespass onto people’s private property, steal a few calories of nectar from their foliage, and then bring it back to my hive and aggregate and process it for my consumption,” Gonzales says. “It sounds criminal but everybody seems to be ok with it.”

Across the country, 98 cities are certified Bee Cities, committing to actively engaging in pollinator conservation. Seattle, for instance, has its Pollinator Pathway, a mile-long, 12-foot ribbon of “pollinator-friendly pathways.” Boston has its Pollinator Ribbon, a series of pollinator-centric gardens. And Atlanta recently launched Pollinator in the Parks, a program for planting five new pollinator gardens. These are the kind of urban bee projects that Philadelphia should steal. Lemon Ridge Garden, where Gonzales gardens at the corner of Ridge Avenue and Mount Vernon, offers a model. Philadelphia also has an annual Honey Festival, with events at Bartram’s Garden and other spots.

Urban beekeeping on the rooftop at 990 Spring Garden—a seven-story “creative office space”—is one part of what its owner, Arts + Crafts Holdings, calls a “reimagining of historic buildings and the urban spaces between them”

About five years ago, Arts + Crafts began buying properties—which now spans three dozen buildings and 2 million square feet—in what it calls the Spring Arts neighborhood. “My passion is in place making and neighborhood revitalization,” says Craig Grossman, general partner. “There’s a lot of patience that goes into changing a neighborhood.”

For years, this section of the city—roughly from Spring Garden to Callowhill, from Broad to 2nd Street—was what Grossman calls “the hole in the donut” that remained stagnant as the surrounding neighborhood actively redeveloped. “This area was originally constructed around the vehicle. It’s a neighborhood that hasn’t seen much love in a long time.”

Grossman’s developments in the neighborhood have coincided with its rebranding as “Spring Arts,” a newish term for an area already known by many names, to many people—Callowhill, Chinatown North, the Eraserhood. It has grown as a place for artists, with studio space and several public murals, partly funded by Grossman, throughout the area.

It’s also anchored by four craft breweries, a critical mass that makes it a magnet for beer aficionados. Besides Yards Brewing Company’s high-profile relocation, there is also Triple Bottom Brewing, Love City Brewing and Roy Pitz Barrel House, which is on the ground floor of 990 Spring Garden. Roy Pitz, in fact, recently released a beer called Sting Arts, which uses honey produced by the hives on the roof.

Like neighborhood revitalization, urban beekeeping is something that requires patience. The Philadelphia Beekeeper’s Guild was established in 2009 and has swiftly grown into a robust organization offering workshops, classes and symposiums. The guild refers to Philadelphia as the “cradle of American Beekeeping.” That’s because it’s the birthplace of Lorenzo L. Langstroth, considered to be the “father of American beekeeping.” In the 1850s, Langstroth invented the removable frame hive based on the concept of “bee space,” which became essential to American agriculture.

Across the country, 98 cities are certified Bee Cities, committing to actively engaging in pollinator conservation. Seattle has its Pollinator Pathway; Boston has its Pollinator Ribbon; and Atlanta recently launched Pollinator in the Parks. These are the kind of urban bee projects that Philadelphia should steal.

Honey is healthier than sugar, with a long history of documented therapeutic properties. But it’s also a fascinating food product, nearly as complex as cheese or wine. Where the bees gather pollen and nectar and from what plant, can create wildly different flavors. Clover, acacia, orange blossom and buckwheat all create starkly different honeys. The time of year also makes a difference. Gonzales says that the honey gathered he collects at 990 Spring Garden is much darker, earthier and more robust earlier in the spring and the honey gets much lighter as the summer goes on.

Above all, beekeeping offers a great advantage in an urban setting—it’s relatively compact. With space in the city for urban farming at a premium, Gonzales says he’s studied how many calories per square feet can be produced. At his garden plot, growing tomatoes, peppers and cucumbers, he produces around 3,000 calories during a year of tending to it. Meanwhile, he’s now producing over 100,000 calories per year with just two square feet worth of beehives.

He jokes about the irony of tending to free-range bees. “I like the idea of sending 50,000 bees out every day to trespass onto people’s private property, steal a few calories of nectar from their foliage and then bring it back to my hive and aggregate and process it for my consumption,” he says. “It sounds criminal but everybody seems to be ok with it.”