Home » Arts & Culture » Business for Good: Beyond the Bell

Check out a tour

You can go beyond the bell in Philadelphia and find out the history you won’t hear on your average tour. See the different tours here. Then book online here.

You can also donate to the Caroline LeCount Fund, a fund Leroux and Fisher set up to be able to offer pay-what-you-can tours to those who can’t afford the $49 fee. (Beyond the Bell tries to do a pay-what-you-want tour once a month.)</>

Guest Commentary: No Future For Philadelphia History?
A good government advocate faults City Hall for the announced closure of the Philadelphia History Museum. Have your say about it tonight.
Hunting History
A local program has brought history to life for 15,000 students—and teaches citizenship, too

See Beyond the Bell

Crafting a Future
The Welcoming Center for New Pennsylvanians’ Global Craft Market helps local immigrants launch their own businesses
Citizens of the Week: Debbie and Eric Sasson
With Camp Akeela, a Philly-area native and her husband offer kids who have trouble connecting with their peers a chance to experience the magic of overnight camp
The Citizen Recommends: HUE, A Tech Summit for Women of Color
Entrepreneur Jumoke Dada’s event kicks off Philly Tech Week with a female-centric mantra: “No more hidden figures” 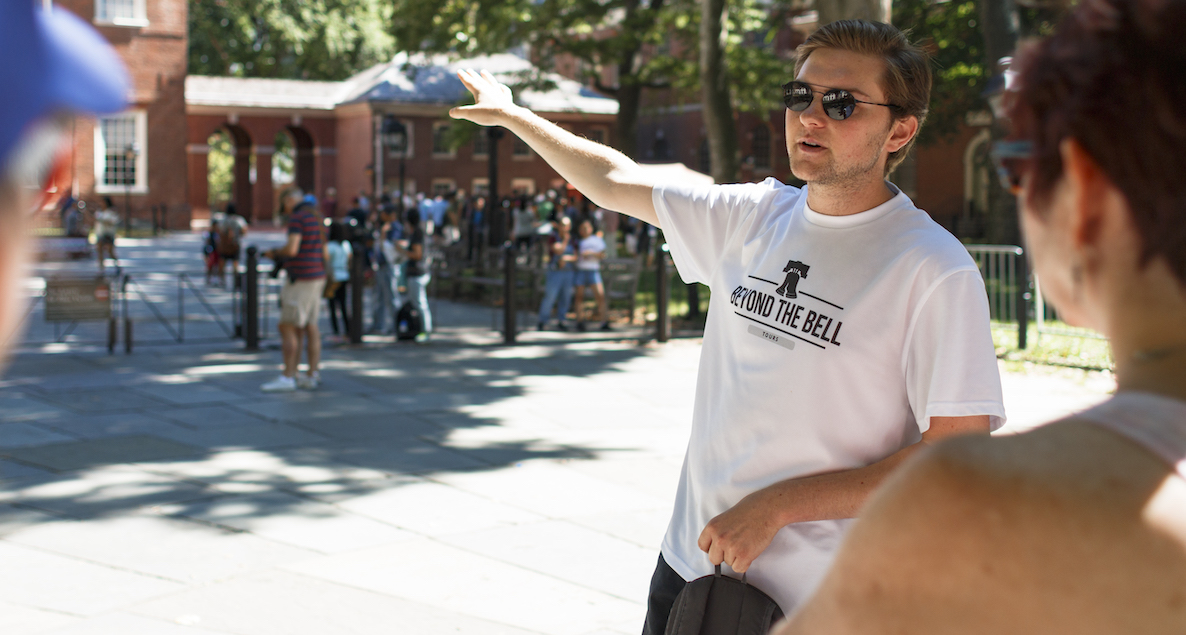 Business for Good: Beyond the Bell

Business for Good: Beyond the Bell

Stand on the corner of 13th and Locust in the Gayborhood, and you can hear about how Barbara Gittings, a lesbian activist who spent her formative years in Philly, was the first person to link queer rights to civil rights, and is largely responsible for the American Psyhicatric Assocation’s decision, in 1973, to acknowledge that homosexuality is not a mental illness, as it had previously been thought.

Wait outside of The William Way LGBT Community Center, and you can learn about Kiyoshi Kuromiya, a grad of Penn’s architecture school who served as an openly gay delegate to the Black Panther Convention—and was a nationally-ranked Scrabble player.

Walk across the street, to a beautiful mural dedicated to him, and you can discuss Alain Locke, a black gay poet who created The New Negro, an anthology of black art, in response to the lack of diversity in the typical academic arts cannon.

“When you go to the Liberty Bell and don’t talk about slavery, you are saying that slavery is not important in the journey to freedom and liberty,” Leroux says.

Then walk a few more blocks to the mural of Gloria Casarez, to hear how she was the program coordinator for the LGBT Center at Penn when the AIDS epidemic broke out. Realizing that health resources, which were concentrated in the Gayborhood were not reaching neighborhoods in North and West Philly, she created minute-clinics and staffed them with volunteers to help non-white communities deal with the AIDS crisis.

These Philly pioneers changed the course of history—yet they’re hardly household names like Ben Franklin, Betsy Ross, or even Gritty.

Joey Leroux and Rebecca Fisher are working to change that with their one-year-old company, Beyond the Bell Walking Tours. Unlike more mainstream, predictable tours offered throughout the city, theirs highlight the above-mentioned pioneers alongside other marginalized communities, peoples, and histories; tours include an LGBTQ tour, a Badass Women of Philadelphia tour, and The Philly Classic tour.

Leroux and Fisher met at Haverford College. Fisher grew up in the Philly area, and Leroux, originally from Maine, fell in love with the city as an undergrad. While studying Econ at Haverford, Leroux became interested in social entrepreneurship, which marries doing good with making a profit. So when Rebecca came to him with the idea to lead tours highlighting underrepresented historical figures, he was intrigued. Would it be possible to make this profitable?

The choice to set up shop in Philly was an easy one: It’s a historic town that cares about its history. Leroux felt a particular pull to stay given the city’s rich queer culture, which he discovered while going on dates during college. “Growing up, I couldn’t imagine working while queer, and with other queer people—in Philly it’s possible to do because of the history of activism here,” he says. But when he would see tours go through the Gayborhood around 13th Street and not even mention it, it was heartbreaking to him—even, he believes, dangerous.

“Tour guides are decision-makers. They decide whom to highlight and who they think is important,” Leroux says. And that doesn’t just apply to LGBTQ issues: “When you go to the Liberty Bell and don’t talk about slavery, you are saying that slavery is not important in the journey to freedom and liberty.”

“There is this myth in entrepreneurship that you can do it by yourself, but in reality you ask everyone you know to help you out—Haverford, friends, parents—I use it all,” Leroux says.

Betsy Ross is the only woman talked about in mainstream tourism, he points out—meanwhile, Hannah Penn ran our state for 14 years, and is barely acknowledged. “What does that mean to tell Ross’s story over Penn’s? That choice is consequential,” says Leroux.

In their path to creating a more authentic look at history, the duo has had to address complex questions. How do you emphasize how far we’ve come while still showing how far we have to go? How do you use monuments, statues, and murals to your advantage in your tour? How do you create a tour talking about people who don’t have historical tributes or markers? While Leroux and Fisher may not have all of these answers, they are grappling with them, and believe strongly that you have to take a stance.

To date, the company has one year and around 700 tours under its belt, and TripAdvisor already ranks it the number-one tour company in Philadelphia. “I didn’t know if this was going to work. I didn’t know if people would buy women and queer history. We took a chance because we thought it was important,” Leroux says. He attributes their early success to strong support. “There is this myth in entrepreneurship that you can do it by yourself, but in reality you ask everyone you know to help you out—Haverford, friends, parents—I use it all.”

The answer to their business question—whether a tour company can make money—is evolving. That first summer after graduation, they participated in a summer program at Haverford College, Haverford Innovations Program’s Innovation Summer Incubator, which enabled them to have financial support while researching and starting to give their tours. Since then, they added another tour guide to the group. Leroux has a side job answering phones for Context, an international tour company; Fisher works for the Franklin Institute part-time during the winter months and then transitions to full-time for BTB’s summer season. BTB broke even last year, and expects to make a profit this year. The tours are $49, but they do have a Caroline LeCount Fund to which you can donate, which enables them to do a pay-what-you-want tour once a month.

And while PRIDE may have come and gone in June, Beyond the Bell Walking Tours operates its LGBTQ, and all other, tours year-round.

And as any student of history can tell you, forgetting our history is the quickest, and most dangerous, way to risk repeating it.

Joey Leroux '18 giving a Beyond the Bell tour in Philadelphia. Photo by Alexandra Iglesia '21