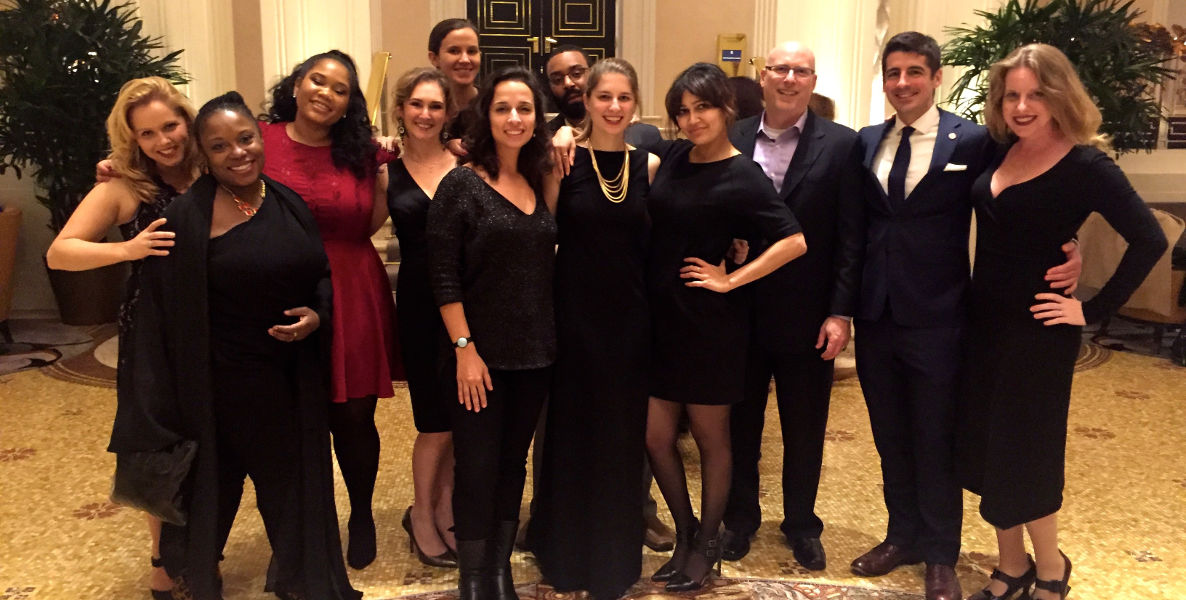 About a half-hour from the Waldorf-Astoria, home of the annual Pennsylvania Society, Jay-Z was blaring on the radio. In the back of the bus, Archna Sahay and Samantha Pearson were laughing loudly—something having to do with drinking stories. (For bios of innovation invaders, read Get On The Bus.) A few seats ahead of them, others were toasting Danielle Wolfe’s good news: A nonprofit consultant and education expert, earlier this day, she’d accepted the position to become the executive director of the M. Night Shymalan Foundation. At the front of the bus, the suavely-dressed Nick Marzano, Young Involved Philadelphia president, was holding forth on the perils of a one-party political system. Elsewhere, Omar Woodward and Sylvester Mobley talked about the impediments to true school reform; Yasmine Mustafa praised Yuval Yarden of Philly StartUp Leaders, for her “Founder Factory” event the night before which doubled in attendance from last year; and Danielle Mancinelli, a reading specialist who has started The Bridge, a reading program that mixes social services with phonics, whipped out her phone to record the stories of how those around her started their startups.

Taking all this in, I must have unwittingly been getting my white man-overbite dance move on. “You go, Larry!” Sahay called out, to much laughter.

When we got to the Waldorf’s Bull & Bear saloon, an old-school, wood-paneled bar with Sinatra—a previous generation’s Jay-Z—crooning about the Summer Wind, we toasted to our newfound hashtag and mission: “To the #NewGuard!”

Soon, a handful of guests joined us. There was Harold Epps, the city’s incoming director of commerce; David Bookspan of DreamIt Ventures; Melissa Grimm of Grimm and Grove Public Relations; and venture capitalist Wayne Kimmel, dispensing networking wisdom. (Fill up one pocket with business cards and leave the other one empty; by night’s end, the goal is to empty the one pocket of your cards while filling up the empty pocket with those of other people). Reverend-turned-congressional candidate Bill Golderer stopped by, glad-handing. Later, Comcast’s David Cohen would meet some of our posse, as would one of the few state legislators at this year’s festivities, State Senator Daylin Leach. Upon meeting Danny Cabrera, founder of biobots, the maker of 3D printers that print human tissue, Leach jokingly asked: “Can you make me a hand?”

“Well, one of our machines will be able to,” Cabrera replied.

Instead of wringing my hands about our present, I found myself fantasizing about the future. Who knows whom among our bus mates just might be our Jane Jacobs?

Interestingly, more than a few of our crew didn’t seem to recognize what most of us might consider Philly’s boldest-faced names. That’s because they’re too busy working 18 hour days. “I work, and crash by 10 pm,” said Mustafa, whose company, ROAR for Good, has been generating great buzz.

And that, of course, is the challenge for our New Guard crew: To achieve their personal dreams and wield influence where they choose to live; many, like Mustafa, are already incorporating social impact into their business missions. But they’d also do well to let their voices fly when it comes to matters of the common civic good. We need them to assert themselves (which includes Millennials turning out to vote at a higher rate than 12 percent), but it’s also a matter of enlightened self-interest. Remember the adage: “If you’re not at the table, you’re on the menu.”

One of the reasons we went on this jaunt into the belly of the Old Guard was to strike a collective blow against that recurring Philly curse: Waiting your turn. There hasn’t always been room at the problem-solving table for new blood in our town, which is what Zack Stalberg was getting at when he announced his retirement and pending move to New Mexico last year: “The decision is purely personal,” said the former longtime editor of the Daily News and head of Committee of Seventy. “But I would not mind if it caused other members of the permanent establishment in this town to think about giving way to a younger and more change-oriented set of players.”

Ah, yes, the permanent establishment. Its deference to holding onto power tends to value incrementalism over bold reform. It’s why we get a progressive Land Bank—but we have to wait years for it and we have to tolerate its deferral to Councilmanic Prerogative, kinda defeating the purpose. And it’s why we can’t even hold a hearing into selling the Gas Works for a $1.8 billion windfall. It can get tiring; the status quo can beat you down.

Yes, cities are led by mayors and councilman and titans of business, but the wild cards have long been ordinary citizens, usually young, who respond to condescending pats on the head with an “I’ll show you” determination to stand for something beyond their narrow self-interest.

But then there are nights like last Friday night, where a group of young, and young-at-heart, doers knocked on the establishment’s door and were hospitably received. At one point, I think it was in the bar, before the crush of Larry Ceisler’s late-night Gov. Mifflin party separated a bunch of us, when Yuval Yarden said to me, “You look happy.” I think that was because, despite the degree to which I truck in wiseass irony, I’ve gotten sentimental about the American city. What an odd experiment: Packing disparate groups together, inviting them to live in close proximity to one another, forming a community where before there had been none. There is nothing inevitable about it; as our legendary reformist mayor Richardson Dilworth once said, “Where would cities be without men like me to fight for them?”

So last Friday night, it felt like what I was witnessing—on the bus, in the bar, at the party—was nothing less than a city in a state of becoming. Yes, cities are led by mayors and councilman and titans of business, but the wild cards have long been ordinary citizens, usually young, who respond to condescending pats on the head with an “I’ll show you” determination to stand for something beyond their narrow self-interest.

In New York City, that type of eloquent example was once set by a young housewife who moved to Greenwich Village by way of Scranton, Pa; she had the temerity to tell power broker Robert Moses and an all-star lineup of city planners that it wasn’t okay to build highways through her neighborhood. Her name was Jane Jacobs, and her speaking of truth to power still resonates. In Seattle, for example, the Jacobs-like character has been urban designer and citizen activist Cary Moon, who founded the People’s Waterfront Coalition and led the opposition to a disastrous tunnel project that has paralyzed that city’s government. In Detroit, there’s 27-year-old Andy Didorosi, who refused to accept Detroit’s abandonment of a light rail project and instead bought a half-dozen school buses, hired artists to make them look cool, and founded the Detroit Bus Company as an alternative.

We’re in the DIY era,. How cool it would be to invite that ethos into our politics? Others already have. In Boston, for example, an experiment in “participatory budgeting” finds citizens between 12 and 25 empowered to spend $1 million of the city’s annual budget. Ballots are widely distributed through youth programs and schools throughout the city. The program, started by the late Mayor Thomas Menino is called “Youth Lead The Change” and was inspired by initiatives around the globe that give citizens a more direct say on how their taxes are spent.

Much has been written since the weekend about what a subdued event Pa Society was this year. The legislators, wrestling over the budget, stayed away, as did the Governor. The parties were full of behind-the-scenes faces—the lobbyists, staffers and vendors who interact with government. The talk at the Mifflin party was about our many embarrassments: The budget, Kathleen Kane, Porngate, Seth Williams.

That’s a lot of downers. Yet I wasn’t feeling down. Perhaps because I was in the company of people who spent most of their time talking about education reform and investing in startups. Instead of wringing my hands about our present, I found myself fantasizing about the future. Who knows whom among our bus mates just might be our Jane Jacobs? It could be Mancinelli, who self-identifies on Twitter as “Reader, Writer, Teacher, Wave Maker, World Shaker.” It could be Mustafa, whose company will donate a percentage of its profits to programs that teach consent, respect and healthy relationships. It could be Mobley, whose teaching of tech skills will contain both for-profit and non-profit models. It could be Marzano, who sent me an email of thanks over the weekend that closed with a perfect example of why that bus trip was full of hope and good vibes:

“Let’s talk soon about the possibility of digging into a renewed City Charter,” he wrote. “Looking through the National Civic League’s 8th Edition Model City Charter today and pulling some recommendations and questions for later. Because that’s how I spend a 60 degree December day.”