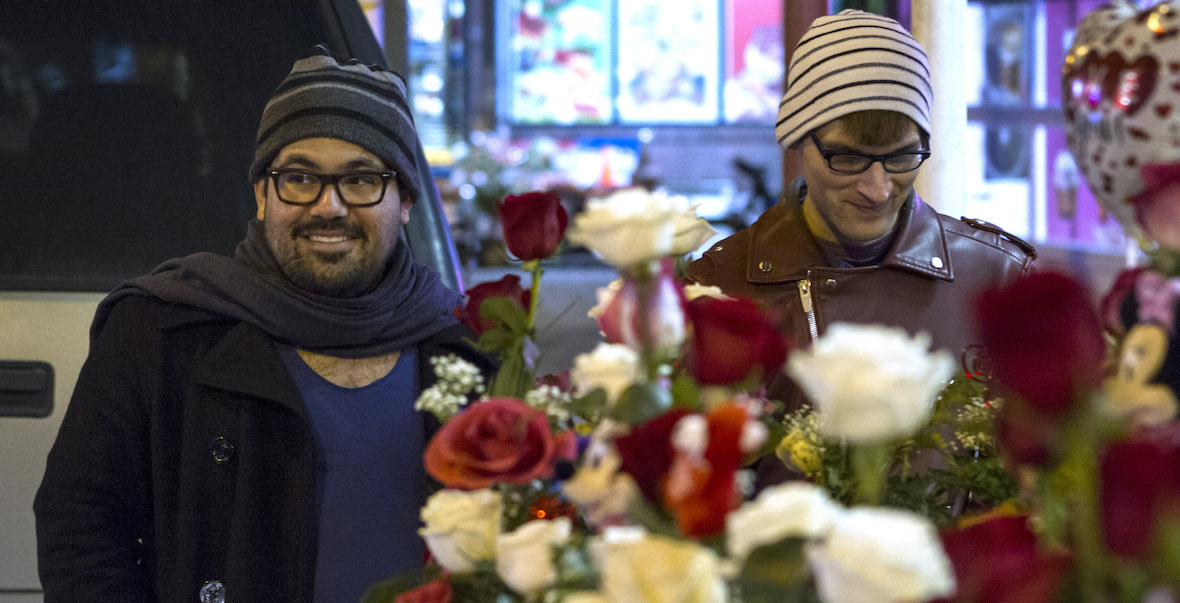 As part of a series about Puerto Rican hurricane evacuees, a couple looks to rescue their homeland—from a new home in Philly

As part of a series about Puerto Rican hurricane evacuees, a couple looks to rescue their homeland—from a new home in Philly

Melvin Rodríguez-Rodríguez spent his adolescence reading Edgar Allan Poe. The cold and horrific settings of the dark narratives he loved stood in stark contrast to the warm Caribbean where he was growing up. Over time, the two worlds fused in Melvin’s head, imbuing him with a lifelong commitment to the literary craft of inciting terror. With his own terrifying fictions, came an impulse to explore: What kept Puerto Ricans up at night? What were they truly scared of?

Related from The Philadelphia Citizen:
Those Who Left
Hurricane Maria has created a hidden evacuee crisis in Philadelphia. A Puerto Rican writer living here launches a project with The Citizen to tell the stories of those forced to flee

A year after meeting his partner, Ángel Isían, the two embarked on an ambitious project. Combining Melvin’s passion for horror and Ángel’s mastery of poetry, fantasy and science fiction, the two edited and wrote stories that aimed to capture the terrors that struck the most fear in Puerto Rico’s collective heart. Submissions rolled in and the same themes popped up over and over again: Religious repression. Provincial mentalities. Immigration. Poverty. A paranoia of intimate strangers. No cierres los ojos, or Don’t Close Your Eyes, sold successfully in the last few bookshops that had survived Puerto Rico’s tumultuous economy and the rise of e-books.

When Hurricane María came along, it was as though one of Melvin and Ángel’s  uniquely endemic Puerto Rican horror stories had come to life.

They bought one way tickets to Philadelphia in December, an overnight decision built on months of devastation. Choosing the city was a matter of chance. Melvin’s best friend, who had left Puerto Rico a week after the hurricane to scout new cities, had liked Philly the most.

The couple weathered the storm in different parts of the island. Ángel was near a water reservoir in Santa Isabel with his parents, a municipality in the south of the island. One of the water cisterns on his grandfather’s roof had toppled in a flurry of furious winds and flooded his home.

Melvin was in the mountains in Salinas with family. The pressure of the rain was so strong it seeped through the small slips of the windows. At around 4 am, he was already running around the house to safeguard it from flooding. By 3 in the afternoon, Melvin’s family was busy at work still, using quilts and towels to soak up the powerful inundation.

But the storm was not the worst of it all. It would be three days before Ángel and Melvin got in touch via text, to finally reunite a week later in their San Juan apartment.

In the beginning, “no God and no law existed,” says Melvin. At first, there was only one radio station working, one man left standing in a sea of white, lonely noise. Slowly, more and more channels began to tune in. Interviewed politicians gave the same responses to demands: “There is a shipment coming from the outside. There is someone coming.”

But nothing and nobody came soon enough. No one knew anything. The cargo ships were stuck near the ports and couldn’t anchor. There were no drivers to distribute goods, and no working roads to actually drive through. How bad had the destruction been? How many dead? These politicians, who had generators and networks of resources to acquire food and water, had left the island adrift in the Atlantic blue. FEMA took nearly a month to arrive.

When Melvin reached the San Juan area and finally got some signal, he posted an update about how his Salinas neighborhood was doing. He was flooded with messages of gratitude. People had not heard anything. They’d assumed everyone was dead.

María became a synonym of limbo. Post-hurricane life was “some kind of purgatory” where days blended into each other. Waking up meant a new search for potable water and a place to recharge electronics.  Keeping the windows open meant deciding between battling hordes of mosquitoes or coping with the sweltering heat that struck Puerto Rico in the weeks after the storm.

Before the hurricane, the couple started their publishing house to “rescue Puerto Rico through literature.” They are hopeful they can do it, maybe even better, from Philadelphia.

Everything was closed or inaccessible, so they stayed put. There were no opportunities to work. Ángel couldn’t teach English at his high school. Melvin’s job as a graphic designer depended on an internet connection.

They used their savings to buy food and water. By bedtime, exhaustion would take over, but the stress of the situation wouldn’t let Ángel or Melvin rest. When they finally dozed off, the early morning light would trickle in shortly after three to four hours of sleep.

Daily life became unbearable. María had dug Puerto Rico’s grave, and an economy of disaster was in full force. If another major hurricane hit Puerto Rico, the island would not survive the coming year. And neither would their livelihoods. Seeing how the diaspora had mobilized to come to Puerto Rico’s aid, they believed they could be more helpful from the outside, to themselves, their family, and to their island. Eventually, Ángel could even bring his parents with him.

They bought one way tickets to Philadelphia in December, an overnight decision built on months of devastation. Choosing the city was a matter of chance. Melvin’s best friend, who had left Puerto Rico a week after the hurricane to scout new cities, had liked Philly the most.

They arrived at the Luis Muñoz Marín Airport, consumed by relief, a week later. It was a scene of disaster in itself. Over the last few months, thousands of people had stuffed themselves into the terminal, hoping to leave on the few flights available. By the time Ángel and Melvin were leaving, traveling out of the island was more manageable.

It was still a difficult space to exist in. Scenes of couples and families being separated were everywhere. It was hot, sticky, and there were frequent blackouts. But the uncertainty of delving into a new life was not the same that Hurricane María brought. It was another limbo, but a “more manageable one,” says Ángel.

The couple began to look for employment after a few weeks of getting to know the city. Ángel landed a job at an afrocentric charter school teaching English, and has loved so far working with students and learning about Black history and culture. Melvin is working through a temp agency while he looks for permanent employment. He is still doing some graphic design work for his old agency, but the influx of work depends on whether the company has electricity or internet, which varies from day to day.

They have used the savings not spent on food, water and other necessities during the hurricane to find housing in Philadelphia. Airbnbs around the city, friends’ homes, and Ángel’s aunt’s Bucks county residence have all served as temporary lodging. They have been lucky. So far, only an Eagles game that booked all the hotels around the city threatened to leave them homeless. However, the situation has been financially trying.

The couple loves cities with good theater and libraries, and Philadelphia is filled with plenty. Once settled, they intend to take in the city’s rich cultural life. Ángel already participated in a queer poetry reading one recent weekend. Both are coming back into their writing.

For some time, Melvin and Ángel thought about changing his most recent pre-María stories to reflect the new Puerto Rico after the storm. The compilation is a relic of the Puerto Rican psyche before the storm. But more importantly, they realized, it is evidence that a lot of the fears and societal issues that people attributed to the hurricane already existed, like the paranoia of the other. Ángel believes that “it was not all María’s fault. The hurricane just accentuated a lot of the issues that existed. María stripped away the farce that Puerto Rico is a stable country.”

Both men know the hurricane will be incorporated into their stories and narratives. Both want to write about Puerto Rico. They are passionate about giving Puerto Ricans fantasy and horror stories that reflect the realities of the island. While Ángel was a teacher, Melvin regularly visited schools to get young readers excited about their Puerto Rican literature. They also offered free writing workshops to help others learn the craft of writing.

Ángel and Melvin did not want to leave the island, but “the country pushes you to leave. In part, it is because of María, but it is also the failure of its institutions. One doesn’t have any other choice but to abandon what you know and love,” says Melvin. Before the hurricane, the couple started their publishing house to “rescue Puerto Rico through literature.” They are hopeful they can do it, maybe even better, from Philadelphia.