Be there for the senior citizens in your life

The US Department of Health and Human Services provides guidance on aging at home.

Aging in Place is a non-profit advocating for seniors’ quality of life, and maintaining independence and dignity. They provide resources for older adults and caregivers on medical alert devices, hearing aids, home modification, and how to stay mobile as you age.

We hope to do that in our Good Citizenship Toolkit, which includes a host of ways to get involved in Philadelphia—whether you want to contact your City Councilmember to remind them how important it is to support local businesses, get those experiencing homelessness the goods they need, or simply go out to dinner somewhere where you know your money is going toward a greater good.

Geoff Gross tells the story of his brand 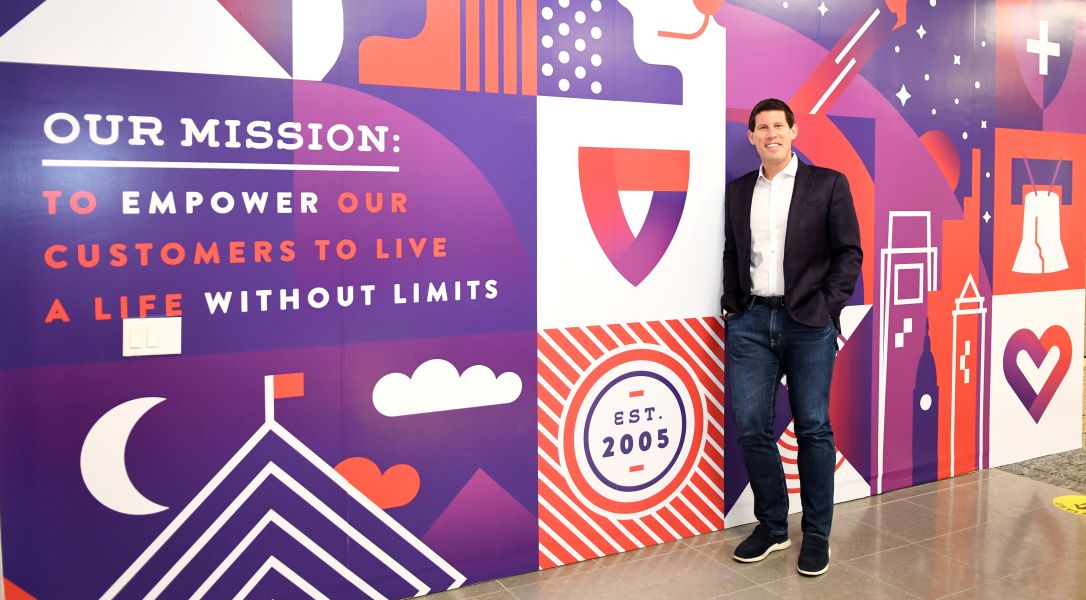 When Medical Guardian CEO Geoff Gross launched his company, he had a simple goal: Protecting his grandmother.

“My mom’s mom was, you know, a little bit of a heavier woman. She lived alone and used to slip in the bathtub,” he recalls.

After his grandfather passed away, Gross’s grandmother Freda stayed in the house in Glenolden, PA that the couple had shared since the late 1940s. By the time she reached her 70s, Freda still felt active and capable, but with two knee replacements, she wasn’t just a fall risk. She’d fallen, and had to be taken to Taylor Hospital, where she had worked as a nurse for 30 years.

Gross suggested she get a medical alert device. She demurred: Those infomercials featuring seniors lying helpless on the floor, calling out I’ve fallen and I can’t get up! insulted her self-image. To compromise, Freda and her neighbors developed their own system: If they didn’t see her lights on by 9 a.m., they’d come check on her.

Though medical alert devices have been around since the 1970s, only eight percent of seniors believe they need one.

“You can imagine some of the scenarios where it would be a pretty bad night,” he says.

Gross’s grandmother wasn’t alone in rejecting such devices. Though medical alert devices have been around since the 1970s, only eight percent of seniors believe they need one, according to a 2020 survey by Senior List, a website dedicated to reviewing medical aids for older people. Yet, with 10,000 Boomers turning 65 each day and, according to the Pew Research Center, 27 percent of adults aged 60 and older living alone, there’s a greater need than ever for such services.

In Freda, Gross saw both an opportunity to help someone he loved—and a business opportunity. He would go on to pioneer smart, wearable devices that make hundreds of thousands of people safer and more connected—and rebrand a tired industry. Simultaneously, he’d create one of our region’s fastest-growing, most successful, and most relentlessly mission-focused businesses with a values-centered team culture, employing hundreds of Philadelphians.

This is why he is one of The Citizen’s Generation Change Philly cohort, a partnership with the nonprofit Keepers of the Commons to provide educational and networking opportunities to the city’s most dynamic change-makers.

Gross grew up in Bryn Mawr with a serial entrepreneur for a dad. Ken Gross ran several successful businesses: franchises, real estate investments, Tri-State Alarm, and Connect America, a digital at-home healthcare solutions provider. Geoff Gross can’t remember a time when he didn’t want to be an entrepreneur, either. As a teen, he dreamed of creating a line of athletic apparel, like Wharton alums Jay Coen Gilbert and Seth Berger did with AND1.

Upon graduating from the University of Maryland in 2002 with a degree in business, Gross returned to Philly to work for his dad’s company—but still dreamed of starting his own. He came up with two. One was Tracking Now, a service to provide GPS tracking for trucking fleets. The other was Medical Guardian, a disruptor to the medical device market.

For the first few years, Gross ran both businesses out of his apartment at 15th and Locust, funding them with personal credit cards and savings. For Tracking Now, he’d drive around, looking for semis. When he spotted one, he’d write down the phone number on the back of the trailer and call the company that owned it. His approach landed him a number of clients, including the Philadelphia Water Authority.

His approach to Medical Guardian was more mission-driven.

Teaming up with Linear Technology, he remembers thinking, “What if we really did this right? What if we connected with our consumers and patients on a deeper emotional level, and had a messaging campaign that was respectful in nature and a brand foundation that was built around empowerment and supporting an active independent lifestyle?”

When prospective clients asked for references, he’d point them to Grandma, who’d sing the praises not only of how the device worked—but also of her grandson.

It started with product design. He replaced the industry standard, a bulky button worn around the neck, with devices the size of a coin. Gross sports the wrist version himself, on a sleek black strap. It’s got an Apple Watch vibe.

But it helped to be at least 75 to promote it. At age 83, Freda, one of Medical Guardian’s first customers, also became their primary recruiter. (His dad’s mom, also named Freda, pitched in with consumer testing.) When prospective clients asked for references, he’d point them to Grandma, who’d sing the praises not only of how the device worked—but also of her grandson. “She had a 100% conversion rate,” he says. (Gross’ mom’s mom passed away in 2013.)

When things got too busy, the entrepreneur made a decision. In 2008, he sold Tracking Now to focus on the mission-driven Medical Guardian.

Five years later, Medical Guardian had 35 employees and a Center City office that Gross worried was too large for his small staff. He struggled to gain traction at industry conferences. “I’d literally sit and eat by myself because nobody took me very seriously,” he says.

Fast forward to today, and Medical Guardian has made Inc.’s list of the 5,000 fastest-growing companies for 10 consecutive years. The secret to their success: Smart tech—and Carol Brady.

Medical Guardian’s on-the-go medical alert devices are designed to be worn as a watch, necklace or clip. Their help button and GPS-enabled recognition system connect to a 24/7 client alert service upon detecting a fall or a period of immobility. They function inside and outside of the home, with a range of 1,400 feet (about four football fields). The home system is voice-activated, like Amazon’s Echo.

What’s more, their smart watch, the MGMove (the one Gross wears) has messaging and calendar functions to help its wearer stay in touch with friends, family and upcoming events. Its operation is much simpler than the Apple Watch—and serves to mitigate social isolation, a contributor to dementia, heart and stroke risk, according to the CDC.

Medical Guardian sells directly to customers as a subscription service at a current cost of $36.62 per month to $39.95 per month for their Mobile 2.0 wearable device. (Competitors’ subscriptions typically range from $20 to $75 per month.)

But tech’s nothing without visibility. In 2015, Gross recruited outspoken, all-American, 80-year-old Florence Henderson, whom Baby Boomers remember as the mom from The Brady Bunch, as the company’s spokesperson. In her commercial, Henderson proclaims, “I value my independence” amid scenes of seniors walking, baking and being active.

Medical Guardian’s clients now number in the 300,000s. Among them was Ruth Bader Ginsburg, who wore hers on her wrist. A thank-you note from RBG sits on Gross’s desk.

Gross employs a team of 310 in offices in Center City and Paoli, which the company opened last year after acquiring MedScope, another personal emergency response device business. This year, Medical Guardian is on track to see about $130 million in revenue.

Gross credits his company’s success to a values-centered team culture that recognizes strong work. Each week, the whole staff discusses the organization’s guiding principles, dubbed the MG23 (23 was Gross’ high school basketball jersey number) in an email chain and in weekly meetings. The MG23 includes “keep it simple,” and the CEO’s personal favorite, “embrace change.”

“It really sets the tone for our culture,” he says. “Embracing change, not just accepting it, is crucial to any growing organization committed to finding better ways to elevate the organization and provide an exceptional customer experience.”

The company’s You Rock program highlights workers who have brought new ideas to the leadership team and generally gone above and beyond. Pre-Covid, a staffer would receive congratulatory cards on their desks. Now, they get digital cards. Gross says they give out about one You Rock per staff member per month.

Gross’ culture-building efforts have made him one of Glassdoor’s top-ranking CEOs. “When you talk to his employees, you hear the enthusiasm—that this isn’t just canned stuff that you put into a presentation. Geoff lives and breathes this stuff every day,” says John Mack, an investment banker for Imperial Capital, advisor for Medical Guardian, and longtime colleague of Gross’.

Max Mishkin of Water Street Healthcare Partners was part of a team who invested $100 million to help Medical Guardian grow their business and acquire other, similar companies. “From a product perspective, Medical Guardian offers a portfolio of easy-to-use and reliable devices that fit people’s diverse needs,” he says.

This year, Gross is working to add vital signs monitoring to their products. He dreams of reaching 1 million customers.

“You have to start with a belief and an opportunity and a gut feeling for what’s possible, and just be committed to making that happen,” he says. “We protect and empower seniors to keep living independently. We have a clear path. We know that there’s a way to get there.”

RELATED STORIES ABOUT CHANGEMAKERS IN PHILLY