You can indulge at The Bourse and help yourself to food, drink and shopping. Grab pizza at Bricco Pizza Romano or grab a drink from Bluebird Distilling. Or, come for one of The Bourse’s upcoming events. Find out more here.

Watch what Jonathan Butler, founder of the Smorgasborg food hall in Brooklyn, has to say about how the fit in they American food landscape: 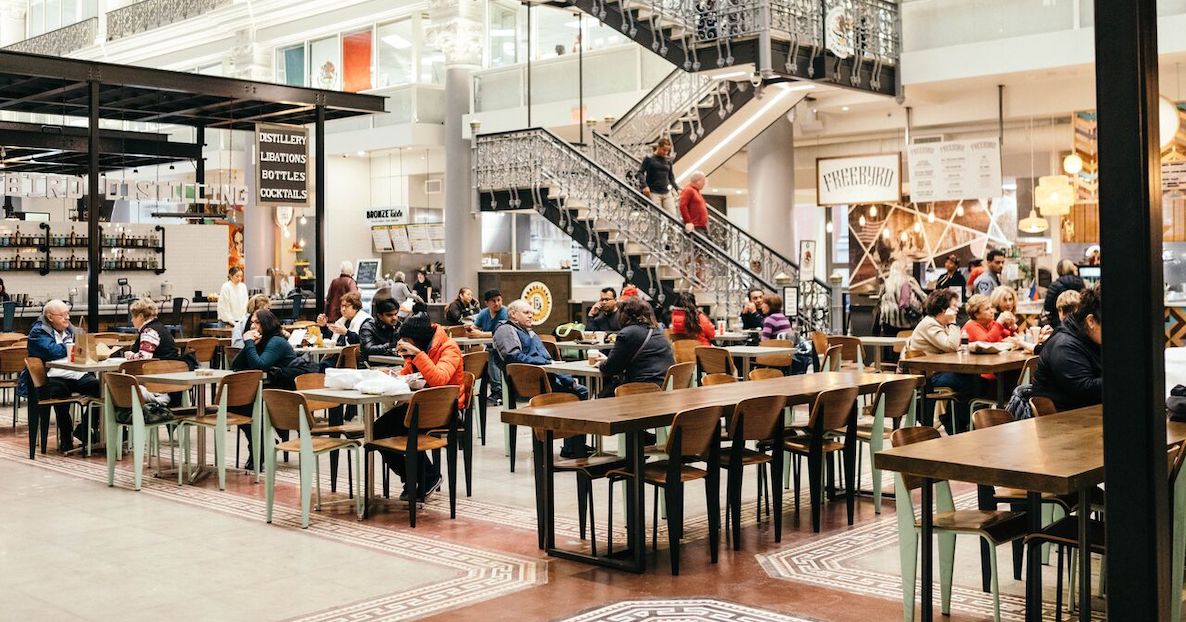 Philly is late to the national food trend. The latest in a series on the nexus of food and culture wonders: Will we embrace the Bourse’s new effort?

Philly is late to the national food trend. The latest in a series on the nexus of food and culture wonders: Will we embrace the Bourse’s new effort?

“The beginning of wisdom is to call things by their proper name,” said the ancient philosopher, Confucius. And so lately I have been puzzling through a modern metaphysical dilemma, a question of nomenclature that surely nags at the enlightened 21st century urban diner: What, truly, is the difference between a food hall and a food court?

I mean, I think I know what people mean when they sneeringly refer to a “food court.” I assume they mean that archetypal area at the heart of the indoor shopping mall, where those of us who grew up in the 1980s might have hung out, under glowing fluorescent lights, at greasy plastic tables, taking in the swirling odors and sounds of Auntie Anne’s, Cinnabon, TCBY, Panda Express, Taco Bell, and Sbarro. For a young, mulleted teen in acid-wash jeans and a Dead Milkmen t-shirt (myself in 1986) the food court was as close as I might come to experiencing the sort of public community space, or third place, that would become the obsessive trend of retailers, developers, and planners over the past two decades.

Alas, the food court of yore, we’re told, is a disgraceful embarrassment—“the most discredited concept in 20th century dining,” according to a 2017 piece by Henry Grabar in Slate. The food hall is now king. The food hall has even usurped the ubiquitous food truck trend of the past decade. “Food Halls Are the New Food Truck,” trumpeted Eater in August. “Forget food trucks. Now ‘food halls’ are having a moment, and they’re changing the landscape,” declared The Washington Post in September.

But what exactly is a food hall? The query seized me during several eating visits inside the beautiful $40-million renovated food hall at The Bourse that opened on Independence Mall in Old City this past fall. In the cool, industrial-chic space inside the Beaux Arts former commodities exchange built in 1895, I sat at long wooden common tables, under the sunny glass ceiling, surrounded by original wrought-iron railings and classical columns. The crowd at noon seemed full of creative professionals, many snapping iPhone photos of their lunch. Nearly everyone agrees that the new Bourse is “Instagrammable,” as is much of the food—most of which is “fast casual” and not fast food, another naming sleight of hand.

To be clear, there is very little “food court food” among The Bourse’s 28 vendors. I tucked into a Kushari bowl of delicious spiced chicken served over lentils, chickpeas, and a tangy tomato sauce from Ka’Moon, a Egyptian fast casual spot. From Lalo, the bright and cheery Filipino street food stall, I devoured a rich beef stew called kaldereta, along with long-si-log, a housemade pork sausage over garlic rice, topped with a soft egg, and a side of pork and lemongrass egg rolls called lumpia shanghai. From Chaat and Chai, I ate tasty chaat rolls one with lamb and another with cauliflower, flavored with mint-coriander and tamarind-date chutneys and masala.

Perhaps more familiar, there’s excellent coal-fired pizza from Bricco (its original location across the river in Westmont, NJ, already makes some of the region’s best pizza), damn good fried chicken sandwiches from Freebyrd, and great ice cream from longtime Center City favorite Scoop DeVille. All of this is to say that the food is a far cry from Sbarro, Panda Express, and fro-yo—fresher, more interesting, and much higher quality. And unlike the food court, you can get craft beer from a number of the vendors as well as cocktails at a big attractive bar run by Phoenixville’s Bluebird Distilling.

It’s actually surprising that it took Philadelphia so long to finally get new-wave food halls. The smaller, Asian-focused Chinatown Square opened in 2017 and Franklin’s Table opened on the University of Pennsylvania campus last spring. But compared to elsewhere in the country, we’ve been late adopters.

The food hall revolution has been swift; it’s hard to remember a time when most cities did not have a food hall, or several of them. It began, by most accounts, with New York’s Chelsea Market in the late 1990s, followed by San Francisco’s Ferry Building in 2002. By 2015, there were about 70 food halls in the U.S. and then 86 by the end of 2016, according to a report by Cushman and Wakefield, the commercial real estate firm. By the end of 2017, the number of food halls had reached 118. Most observers believe, at this rate, the universe of food halls will have tripled between 2015 and 2020.

Nearly everyone agrees that the new Bourse is “Instagrammable,” as is much of the food—most of which is “fast casual” and not fast food, another naming sleight of hand.

Before The Bourse opened, there was some civic concern that it might hurt Reading Terminal’s lunch business. So far, Gupta says, that hasn’t happened. In 2018, Reading Terminal had 7.3 millions visitors, the highest total since they started tracking numbers in 2003.

What worries Gupta more than fast casual concepts is the growing competition from large markets like Whole Foods—especially since its acquisition by Amazon. Reading Terminal has been experimenting with grocery delivery to compete, and is now offering free delivery for purchases—in-person or online—over $40.

All of this is to keep Reading Terminal viable as a market and keep it from turning into just another food hall. “A lot of consumer behavior is working against us. In 2016, more Americans were buying prepared food than fresh foods for home,” Gupta said. “The core of the market is fresh food. The biggest challenge is to maintain this place as a market. If we fail at that, we fail at our mission.”

Others are using The Bourse as a step in their entrepreneurial path. Tim and Hala Bonner, who own Kamoon in The Bourse, began their business as a food truck in the Lehigh Valley in 2014, after they both left jobs in academia (both hold PhDs and still teach part time). They saw an opportunity to serve the food that Hala grew up with in Egypt. “Egyptian food is a niche brand, and people were afraid of it at first,” says Tim Bonner.

After their halal food truck had gained popularity, they opened a stall in Easton’s downtown food hall. Eventually, they were recruited by the developer of The Bourse to open there. Bonner said it cost about the same to build out a 400 to 500 square foot space in a food hall as it did to create a food truck concept, about $125,000 to $150,000. “We’re in front of a lot more customers than at a stand-alone location,” he said. “But the only negative of a food hall is you’re competing with 20 other vendors.”

Still, the food hall experience has been a positive step for a startup like the Bonners’. “Now that we’ve been in two food halls, we understand our brand much better,” he says. They’re soon opening a stand-alone restaurant in Bethlehem, and have plans for others.

At Lalo, Neal Santos and his partners, Jillian Encarnacion, Resa Mueller, and Michael Cher, had been doing Filipino pop-up dinners at various restaurants for five years before deciding to open shop in The Bourse. Lalo is a play on the Tagalog words for grandmother and grandfather, an homage to Encarnacion’s grandfather, who actually sold kebabs and other Filipino food from a cart across the mall for more than 30 years. “We liked the idea of being in one place. It has a similar feel to a food truck,” Santos says. They also like the camaraderie with the other vendors, and the shared sense of community and purpose.

Business at The Bourse, all the vendors say, has still been slow. The food hall opened later than expected, during the late fall, and factors like the holidays, cold weather, and the government shutdown have not helped. Right now there is mostly a lunch crowd, but there is hope for a robust happy hour crowd in warmer weather. But right now the evening is pretty quiet. Lalo’s team is hosting an art and food pop-up on April 4 that may provide a template for how to bring in a night-time crowd. “This place is constantly morphing and evolving,” Santos says.

“The crowd here is obviously lunch-driven and you have to accept that,” said Vincenzo Barone, owner of Bricco Pizza. “They’re trying to build up the night time crowd, but I’m not sure it will happen.” Still, Barone is very optimistic about the future of The Bourse. Its location next to one of the most touristed sites in the country bodes well. And soon, companies will be moving into the office space on the floors above the food hall, with as many as 1,200 new office workers who will need to eat lunch somewhere. “There’s great energy in here. It’s like a little village. I love it.”

I asked Barone if he could tell me the difference between a food hall and food court. “I don’t know if I can answer that,” he said, with a laugh. “I guess I think of a food court as 1985, at the mall with Sbarro.” And a food hall? “A food hall is just 2019. And a hipster with tattoos serving you better food.”