How YOU can help small businesses

Read more about how you can help here:

Citizen of the Week: Anna Purcell
The owner of Manayunk’s Threads on Main launched #ShareYour50 to encourage Philadelphians to keep local businesses afloat through the coronavirus shutdown

Read the report on Erie

How to help local restaurants

Restaurants are among the small businesses in crisis right now. Help them make it through this dire time by ordering a meal to pick-up:

There are good options included in our growing Dining at a Distance guide, Philly Mag’s list and baology’s group delivery, and it wouldn’t hurt to call up your favorite neighborhood spots (or check their social media) to see how you can help.

Do what you can to help Philly servers by donating to the Philly Virtual Tip Jar or the Restaurant Workers Relief Fund. You can also tip baristas at Rally Coffee and La Colombe. 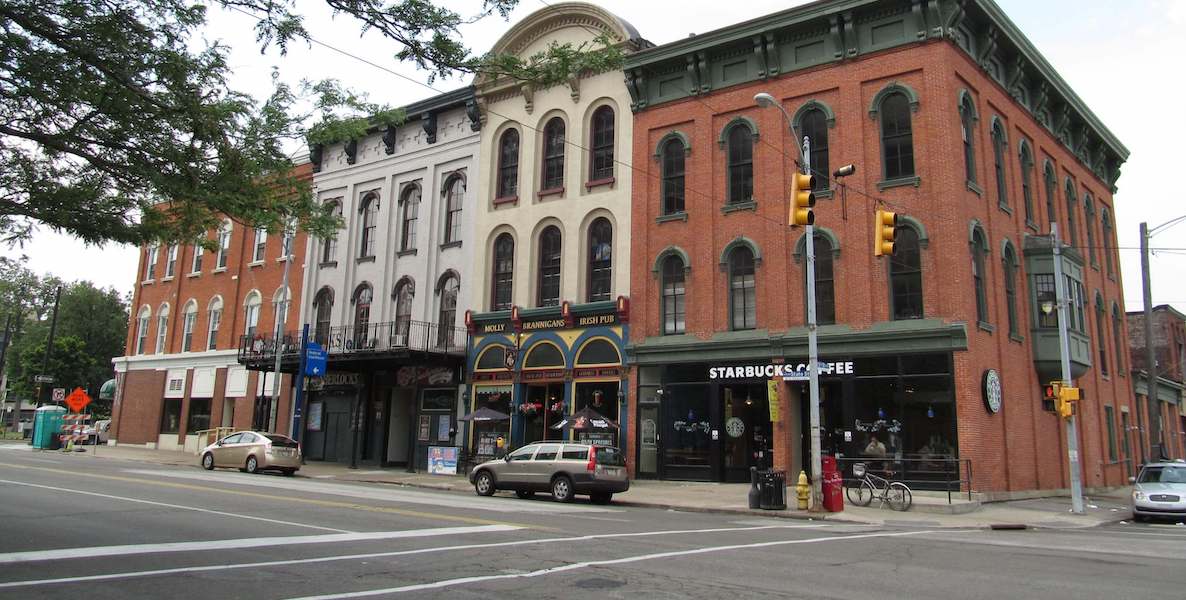 The Virus and the City: An Urban Proxy for the Nation

Drexel’s Metro Finance Lab director on how, in the wake of Covid-19, post-industrial Erie, PA’s efforts at survival can be a model for America

The Virus and the City: An Urban Proxy for the Nation

Drexel’s Metro Finance Lab director on how, in the wake of Covid-19, post-industrial Erie, PA’s efforts at survival can be a model for America

BY Bruce Katz and Ben Speggen

The impact of Covid-19 on small businesses and the places where they co-locate and concentrate—downtown, Main Streets, commercial corridors—has been immediate and devastating.

“Almost overnight, downtowns have eerily become lifeless movie sets—literally shells of their former selves; the buildings are intact (unlike after a flood), but there is little or no business being transacted given the imperative of social distancing and the collapse of basic consumerism,” we contend in our new report, “Why Erie’s Downtown is a Proxy for the Nation: The Future of Main Street Businesses amidst the Covid-19 Crisis.” “If we can keep businesses alive, then the bounce back will be rapid and pronounced. If businesses collapse, then the recovery will be slow and painful.”

Drastically altering their operations to weather the storm, many businesses have had to reduce both their capacity, resorting to take-out-only options, as well as their workforce, laying off significant portions of their staffs.

To drill down to the street level to examine that, we took a look at two businesses in Erie, Pennsylvania—a coffee shop and a brewery, which we profile in our report.

Related from The Philadelphia Citizen:
The Virus and the City: It's The Small Businesses, Stupid!
In the first of a series on cities and the economic response to coronavirus, Drexel's Nowak Metro Lab Director zeroes in on Main Street businesses that are living on the brink

We turned to Erie because in many ways the city is a microcosm of small metros throughout America. A post-industrial legacy city, Erie has been, over the past decade, working hard, against all odds, to revive its downtown core and find a new raison d’etre amidst relentless global restructuring.

From the expansion of three remarkable anchor institutions—the homegrown Fortune 500 company, Erie Insurance; Gannon University; and UPMC Hamot—to the relocation of a homegrown internet service provider to the downtown and continued development of various startups, including Ember+Forge and Lavery Brewing Company, a thriving economic ecosystem is now threatened and becomes more so with each passing day that delays appropriate action.

Erie may lose in weeks what it took a remarkable network of homegrown institutions and entrepreneurs a decade to build.

Ultimately, where can the buck be paused so that progress isn’t further delayed?

“As much as any other metropolis or community, Erie is a proxy for rebuilding the nation in the aftermath of this crisis,” we write, offering takeaways for the moment and looks at how local efforts should be national models.

This comes both in light of Congress’s slow-walk approach to shaping, approving and deploying relief as well as local response efforts. Key to debated federal aid packages are loans. Traditional SBA loans (often carrying nearly 4 percent interest) don’t make sense here, even if either or both the payments and interest are deferred. Less burdensome loan products, still under consideration at the time of writing this newsletter, need to be tested for size, fit and speed.

Locally, examples like that of the Erie County Gaming Revenue Authority’s quickly released Covid-19 Response Fund, as well as those coming from larger metros such as Atlanta, Birmingham and Saint Louis are great starts but cannot be the be-all-and-end-all for businesses.

While localities are leading by example, local relief packages are short-term stop-gap measures targeted for today, while cities and regions wait for state and federal governments to catch up for tomorrow.

Places like Erie reveal the density of small-business networks and the relationships that have built them. Their closeness “forms the basis of a Cheers Economy, where everyone knows everyone’s name, we point out.

An inherent challenge at the local level is that often those renting or selling to small businesses are themselves small businesses. Ultimately, where can the buck be paused so that progress isn’t further delayed?

Our Erie work highlights a few structural observations to think about as we move forward day by day, week by week.

Cities and metros that weather the crisis best will be those with cohesive and collaborative networks of local governments, public authorities, financial institutions, corporations, philanthropies and universities capable of tackling challenges together.

Related from The Philadelphia Citizen:
Reality Check: Building Trust
There have been some important moves to help residents during the coronavirus scare. Now, WURD’s midday host says, the City must do more to ensure trust and safety

These networks will need to act quickly, as many already have, to mitigate the impact of this severe contraction on their economies in general and for small businesses, in particular.

They also must become a feedback loop to assess the extent to which the federal relief package is working and how to fix it in seriatim. Finally, they must prepare intentionally for the recovery when it comes, building on their distinctive advantages.

Each of these actions will necessarily require new metrics and measures as well as innovative practices and products, which will become the new models for urban growth and shared prosperity in the post-crisis world.

This crisis has revealed a sclerotic national government and a responsive federal republic. But the republic doesn’t yet have the right tools or the institutions to get the job done alone.

The need for networked governance with the capital and capacity to perform these critical roles has never been higher. Philanthropy, both traditional and new, will need to step up to provide a surge of funding in this community infrastructure, the capabilities of which vary widely across the country.

But more radical change is needed. The recovery will require not just a little more of what cities and communities were doing before the crisis but a revolutionary transformation.

On metrics, we can track Covid-19 test results thanks to testing, and we can track unemployment rates to give a larger picture of the economy and its workers, but measures to gauge the wellness of small businesses lag considerably.

“Real-time administrative data will need to be collected and then routinized across cities,” we argue. This information will become essential for locally grown recovery plans and prospectuses.

Related from The Philadelphia Citizen:
What does COVID-19 mean for your finances?
Wharton experts share their two cents

On capital, we have, as Congressional actions show, antiquated financial products which may prove inadequate in the near term and ill-suited to the long term, when new equity infusions and cooperative investment vehicles may prove critical.

On institutions, we have only the early stages of intermediaries with the heft to codify and scale new innovative practices as they occur and match large pools of investor capital to the projects (e.g., workforce housing) and people (e.g., minority entrepreneurs) we need to finance. These intermediaries, in other words, are moving billions when they need to move trillions.

This crisis has revealed a sclerotic national government and a responsive federal republic. But the republic doesn’t yet have the right tools or the institutions to get the job done alone. We need New Localism on steroids.

Bruce Katz is the director of the Nowak Metro Finance Lab at Drexel University, created to help cities design new institutions and mechanisms that harness public, private and civic capital for transformative investment. Ben Speggen is vice president of the Jefferson Educational Society and a contributing editor at the Erie Readers.