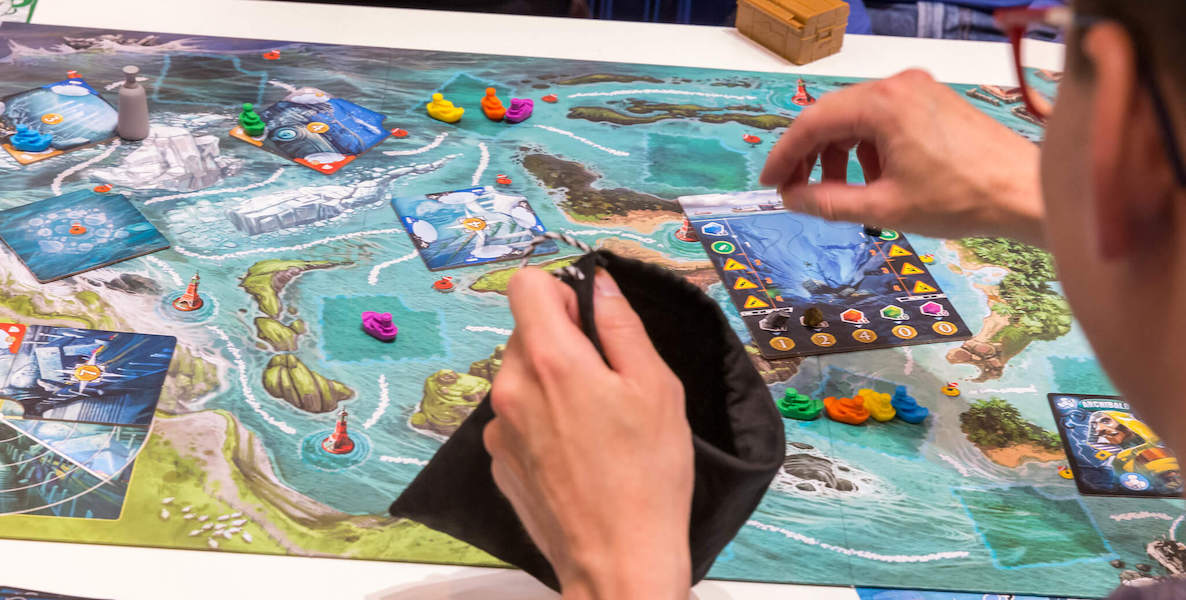 Surviving the Quarantine: Board Games

Bored? (Batty?) These local game café owners have recommendations to keep you and everyone in your pandemic squad entertained

Surviving the Quarantine: Board Games

Bored? (Batty?) These local game café owners have recommendations to keep you and everyone in your pandemic squad entertained

Scrabble, Risk, Monopoly—they’re classics for a reason. But as we wade through week six of the pandemic, we could all stand to boost our game stash.

We turned to three local beloved game cafés—Thirsty Dice, The Basement Board Game Cafe, and Queen & Rook—for recommendations. Even better: Thirsty Dice and Queen & Rook are still taking game orders and making game (and food…and in the case of Thirsty Dice, even toilet paper, flour, and pizza- and cookie-making kit) deliveries. And all of them are selling gift cards, which you can buy now to show them some love, and use for an outing when we’re all on the other side.

Have fun, and be sure to check our podcast and book recommendations for other fun things to do during coronavirus quarantine.

Best board games for your quarantine Patchwork: In Patchwork, two players build “quilts” while trying to be the person with the most buttons at the end of the game, explains Thirsty Dice’s Matt Hendricks. “It’s kind of like this very simple, almost Tetris-style game, where you’re puzzling pieces into a patchwork quilt, and it never ceases to amaze me how in-depth it can get, despite it taking just five minutes to explain.”

Onitama: Like chess but with fewer rules, Hendricks says this game is different every single time you play. “You’re trying to get your master into your opponent’s temple or capture your opponent’s master,” he explains (entendre unintentional). “What makes it very interesting is that there’s a limited set of moves you can use per game, and each time you play, that set of moves changes.”

Related from The Philadelphia Citizen:
Business For Good: Puzzle So Hard
Could a Philly-based puzzle company offer an antidote to all the coronavirus crazy?

For Families With Young Kids Dixit: “Using a deck of beautifully illustrated cards that all have Dali-esque, dreamlike images on them, you get points by trying to get others to choose your card,” says Hendricks about Dixit. It’s great for kids, he adds, because it’s language-independent: “If you’ve got children who are at different reading levels, they’re all going to be able to participate.”

On a Scale of One to T-Rex: From the makers of Exploding Kittens, this one is like charades, with a twist: At any given time there are three charades out on the table, but players also have cards with numbers on them, indicating how intensely or not they’re supposed to act out the charade. “If the charade is being a T-Rex and you have a level-one card, you’re doing a very understated, quiet T-Rex,” Hendricks explains. If you have a 10, you’re doing an overblown one. And you’re not trying to figure out what the charade is—you’re trying to guess the intensity number.

Related from The Philadelphia Citizen:
The Citizen Recommends: The Chase Series
Philly native John Butler III creates children’s books with characters all kids can relate to

For Families With Teens Survive Escape from Atlantis: “You’re on an island that’s slowly sinking into the ocean, and you’re trying to get your ten people off the island to safety, but you have to remember which ones are more valuable than the others, because you’re not going to be able to get them all off,” explains Dave Stufflet of The Basement Board Game Cafe.

Celestia: This is a pretty basic push-your-luck game, Stufflet says. You’re basically trying to predict whether other players at the table have the cards or resources to continue going to the next city. And if the “ship” you build at the outset crashes, nobody gets anything.

Potion Explosion: “This is great! It has about 100 marbles in it, and players are basically ‘students’ taking their final exam in potion class, and selecting different marbles to complete their potions. It’s cool,” Stufflet assures us.

Two more Stufflet game board picks for families with teens: Champions of Midgard and Lords of Waterdeep.

Related from The Philadelphia Citizen:
Gaming for Good
A local family’s Facebook game has encouraged more than 4 million people to do 40 million good deeds, both real and virtual

For friends and roommates Azul: “When I think of roomies stuck at home, I’m thinking of three, four players, and this is a fantastic game for them,” says Stufflet. Each player is an “artist” who takes turns selecting tiles to decorate the walls of a royal palace. You score points based on the way you place the tiles.

Splendor: “This one’s easy and changes every time you play it,” Stufflet says. Players rely on cards and chips to build wealth and earn “gems,” and players win by reaching 15 “prestige points” before their opponents do.

Suburbia: Stufflet explains that this is a game where you’re planning, building and developing a small town and growing it into a metropolis to attract more income, build better structures, attract more people and get the largest population.

Related from The Philadelphia Citizen:
Surviving the quarantine: Podcasts to Get Us Through
Some of Philly’s most revered podcasters share the podcasts they’re listening to

For Empty Nesters and Seniors Detective: “People want something unusual and that will take them a few hours to fill the time, and we have a lot of mystery-solving games that are great for this,” says Edward Garcia, one of the owners of Queen & Rook. For Detective, you can even do online research to add depth to the game. Plus, it’s cooperative, not competitive. “You’re really trying to solve the mystery together,” Garcia says.

Stuffed Fables: “We recommend this one for families but adults love it, too: It’s basically a story about stuffed animals who are trying to protect a little girl from nightmares—it’s a little dark and twisted in a creepy-cute way,” Garcia says. The game plays like a storybook, and the rules change over the course of the game. It’s also cooperative and, as Garcia notes, “Beating someone day after day is gonna get old fast at a time when we’re all already bickering in close quarters.”

Terraforming Mars: Always popular, this one, which involves building Mars colonies, is ideally suited to quarantine because it takes several hours to play.

Another tip from Garcia: “There’s never been a better time to try your hand at Dungeons & Dragons. It’s like communal storytelling, and you can start a game with your partner or family or any number of online groups.

Related from The Philadelphia Citizen:
Surviving the quarantine: 50 Books to Read Now
Some of The Citizen’s favorite citizens share what they’re reading to get them through the twilight zone, er, pandemic
Header photo courtesy Marco Verch Flickr