Want to support New Leash on Life with your time or your dollars? Click here to volunteer or click here to make a donation.

Malcolm Jenkins’ September Surprise
Last week, the All-Pro Eagle—and new Citizen columnist—hosted a party…with a criminal justice reform twist
Guest Commentary: What comes after prison?
To kick off the city’s Reentry Awareness Month, the project editor of the media collaboration The Reentry Project explains why we a need a change to our system
Unlikely Foodies
Philabundance Community Kitchen has helped 600 disadvantaged and recently incarcerated people get culinary jobs—helping to keep them out of prison
Fighting for FREEdom
I’m FREE is one of few programs answering to the issues women face when they re-enter society from prison
Shredding the Rap Sheet
The People’s Paper Co-Op helps ex-offenders clear their criminal records—and turn them into “paper smoothies”
Taking on recidivism
AG Josh Shapiro is determined to make it easier for returning citizens to adjust to life after prison. Just don’t call him soft on crime. 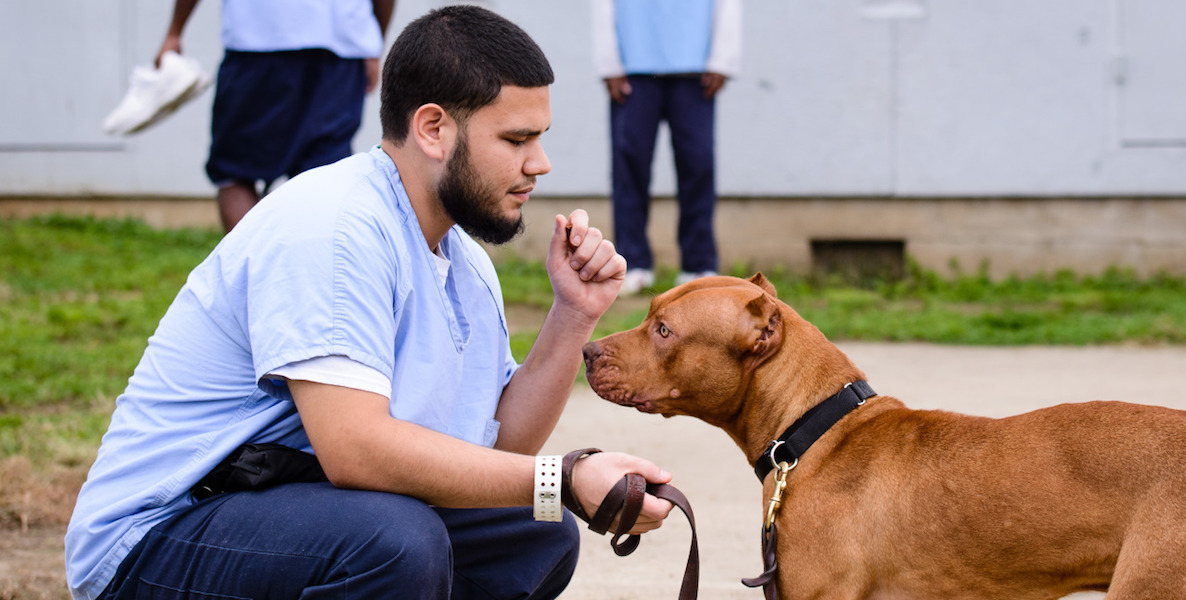 Training For A Better Life

Training For A Better Life

Prison rarely changes one’s life for the better. That much we know to be true. The Bureau of Justice Statistics found that about three quarters of former inmates are re-arrested within five years of their parole. Pennsylvania—which is considered to be something of a success story when it comes to recidivism—has a five year recidivism rate of around 60 percent, meaning that 60 percent of former Keystone State inmates reoffend within five years of leaving prison.

The best way to avoid recidivism, by many accounts, is to train inmates for jobs outside of prison, work that several different organizations have taken on, including Philabundance and Jewish Employment and Vocational Services. But one group stands out in both its results, and the type of it work it promises after prison: New Leash on Life USA, which teaches inmates to train and groom dogs.

The 8 year old program, based in Narbeth, operates in Pennsylvania prisons, and works with up to 40 male and 15 female inmates per year. According to Rob Rosa, associate vice president of prison programs for New Leash on Life, the program places 80 percent of its participants in internships that ultimately lead to full time employment after prison. Many of the hundreds of participants in New Leash on Life are currently employed in the grooming, veterinary or training industry.

Most importantly: New Leash on Life’s recidivism rate is 33 percent, roughly half that of Pennsylvania as a whole, based on their calculation using publicly available information.

Rosa says trainees often find their calling when they start training dogs, something he understands intimately—because he’s been there. He knows how small prison can make you feel, how hopeless and aimless. He knows how just one nod of approval can save a life.

“I identified with him as this living thing that was just thrown away,” says Rosa. “And that dog right there made me really reflect on myself and say, ‘This is what I want to do for the rest of my life.’”

Rosa had been in and out of the juvenile system his whole life, and ended up spending 12 years at Graterford; he got out in 2005. While at Graterford, Rosa signed up for a program called Canine Partners for Life, which has a program that teaches inmates to train service dogs. He discovered he had an uncanny knack for the work. His whole life, he says, he was good with animals; but he found that he could train a puppy faster than almost anyone else in the program.

“The first time I encountered a rescue dog in prison, I identified with the dog. It was a dog that had been surrendered back to the shelter three times, and it was going to be euthanized. He chewed things up in the house and made bad choices,” Rosa says. “I identified with him as this living thing that was just thrown away. And that dog right there made me really reflect on myself and say, ‘This is what I want to do for the rest of my life.’”

Rosa so impressed the founder of Canine Partners for Life, that she promised him a job after prison. He almost didn’t believe it. “I told myself ‘that lady’s pulling my leg’ because no one ever hires anyone from prison, right?,” Rosa recalls. “But then about a month before I saw the parole board, she gave me a letter: Intent to hire. And I just sat in my cell and cried. I couldn’t wait to tell my mom.”

After a stint at Canine Partners, Rosa went on to work for Philadelphia Animal Care and Control, eventually becoming shelter manager overseeing the health and safety of more than 3,000 animals a year. Now at New Leash on Life, Rosa oversees the workshops, reentry and post- parole programs, and has helped to train more than 100 inmates—and to find them work.

To participate in New Leash on Life, inmates are identified by prison social workers, and must be able to complete the three-month job training program behind prison walls, and may not be serving time for animal cruelty, sex crimes, child abuse or arson. Each dog is paired with two inmates in a cell, where they live for three months. Once a week, they meet with a professional dog trainer who teaches them how to train the dogs; they also work with a vet tech to learn about grooming, nutrition and health.

Training inmates to work with animals is a relatively new phenomenon. Such programs really only started gaining steam around the early 2000’s, with only a few pilot programs in play. Now dozens of states have regular dog training programs. Traditionally, reintegration programs have focused on acclimating prisoners to standard labor—kitchen work, landscaping and the like. But evidence shows that former inmates perform best, and are least likely to reoffend when given specific vocational training, like carpentry, plumbing and veterinary services.

Most importantly: New Leash on Life’s recidivism rate is 33 percent, roughly half that of Pennsylvania as a whole.

Veterinary services and animal training, actually, have among the best results of any kind of in-prison vocational training. According to the Pontiac Tribune, a Michigan puppy-training program has an astonishingly-low recidivism rate of around 13 percent; a similar program in Georgia, in which prisoners were matched with dogs to train, had a roughly 11 percent recidivism rate.

Related from The Philadelphia Citizen:
The Breed to Kill Pet Economy
Pet rental agreements are only the latest example of a growth industry out of control.

In Philly, New Leash on Life USA was started by Marian Marchese, a local businesswoman and former president and CEO of Virtu, a Philadelphia-based internet marketing group, who devised the idea after volunteering at Philadelphia-area animal shelters. She thought to bring two populations together—dogs in need of training, and prisoners in need of jobs—because she believed the two could benefit each other; to her mind, working with animals can be a healing process, and she thought it could also heal prisoners.

But it’s not just inmates whose lives are changed with these programs. The dogs’ lives are too. Each year, more than 670,000 dogs are euthanized, according the ASPCA, often because they are deemed ‘unadoptable’—that is, they are considered to be beyond house training. While many inmate programs—like Canine Partners For Life—exclusively train service dogs, New Leash on Life focuses on these hard to reach animals, some of whom are physically ill or anxious, or who have been confined for a long time. After the six week training program, New Leash on Life then finds the dogs adoptive homes.

Marchese, who still runs New Leash on Life, launched the program in 2010 with the Philadelphia Department of Prisons, which originally funded it. Now, it is entirely donation and grant-funded, by several animal welfare groups, law organizations and others. “We’re always looking for innovative and creative programs and ideas to bring to the inmates,” says Shawn Hawes, spokesperson for the Prisons.

Since its start, Hawes says, New Leash on Life has had an outsized effect on its participants.

“The thing about New Leash on Life is that it wraps around inmates who are looking to change their lives,” says Hawes. “We get to introduce inmates to a vocation that they just never thought. They think they can only be a worker or a painter. Sometimes they have no idea that there are things they could do—it just never occurs to them that ‘I can do this.’”