Also, read our Meet the Disruptor story about Needslist, a Philly-based tech startup that crowdfunds aid for 25 million refugees worldwide:

Meet the Disruptor: NeedsList
The Philly-based tech startup crowdfunds humanitarian aid for the 25 million refugees worldwide. It is a game-changer in how we all can be part of the solution

Safe Kids Stories from The Citizen

A Year of Writing Dangerously
With freedom to say what they feel, daughters tell it like it is
"Tastes Like Someone Cares"
During a day in the life of a Vetri school kitchen, a bestselling novelist and founder of SafeKidsStories discovers the secret ingredient behind healthy lunches
Healing Hurt People
An African American ER doctor sought to address the gap between the physical and psychological treatment of victims of violence. Now five area hospitals have adopted his innovative trauma care model
Food for Thought
Local food educator Honeypie Cooking brings the art of taste to Masterman middle school culinary classes

The Chamber singers in Berlin

The Chamber Singers of Haverford and Bryn Mawr Colleges traveled to Berlin in spring of  2017 for a cultural exchange. 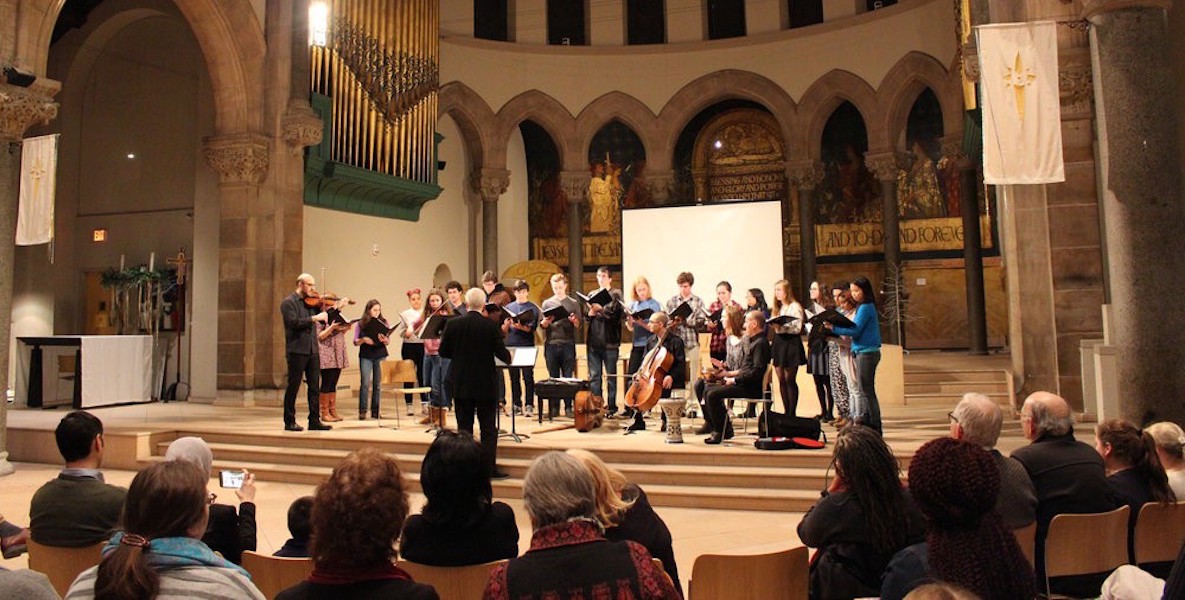 Welcome to your new home, Habibi!

Welcome to your new home, Habibi!

Sitting very close to us, on the apron to the high altar in the Episcopal Cathedral at the western edge of the University of Pennsylvania campus, the three musicians are putting out so much music that if you close your eyes, you’d think there had to be half a dozen people playing.

But it’s just these three for the moment: Udi Bar-David, cellist, an Israeli Jew whose day job is playing with the Philadelphia Orchestra; Hanna Khoury, violinist, and a PhD student at Penn; and Hafez Javier Kotain, percussionist born in Venezuela, and teacher. They play various musical styles with the ease of linguists switching languages: they play perfect set pieces from Western European music, Arab, Latin-American, African-American. Then, one or another will nod, and they’ll tear off together into improvisation as exciting as first love.

We in the audience sit as if we’re at a wedding. On the groom’s side are mostly native-born American citizens, a polyglot ethnic group, mostly grown-ups. On the bride’s side are the new arrivals: men, women, and children, refugees who began a harrowing and uncertain journey away from war and death in Syria with no idea where they might end up. They’ve been here just a day or two, individuals and families and a few U.S. family members, reunited with relatives they’d been trying to get here for months and years.

Now they huddle together in the large cathedral, renovated at the turn of this century to lighten the heavy, Victorian interior. Stone archways in a semi-circle behind the musicians remind us that this faith, like its older and younger Abrahamic siblings, emerged from the Middle East, very near where these new immigrants were born. Small starry lights hang from somewhere over our heads, where the music goes after it has soaked through our bodies.

Besides playing for orchestras or with Sting and tenor Mandy Patinkin, Senegalese Grammy-winner Youssou N’Dour, or Colombian singer-songwriter Shakira, or to open a peace forum at the United Nations, or in Tel Aviv (with percussionist Brad Bloomfield), these three musicians have had their own diasporic journeys. They talk about how, through their music, they’ve made home for themselves and how they welcome the stranger. They say these things, in English, and then in Arabic, and we all nod, even though we’re not catching all the words. But the music says it better.

Toward the end, the cathedral’s music director, Thomas Lloyd, who also teaches music at Haverford College and directs choral activities at Haverford and Bryn Mawr Colleges, brings out a choir from Haverford. The undergraduates are straight out of a college brochure: white, brown, Asian, wearing winter sweaters and sneakers, holding black music folders that dip up and down when they sing, or singing from memory with thumbs hooked in pockets.

Their sound is young and sweet, with very little space between the voices. In front of them a young violinist plays in the Arabic style, as she’s been coached by Hanna Khoury. He plays with them, but sits behind, as does percussionist Kotain. It’s how we support young people in college, with professionals at their service, in front of them to direct, behind them to keep time, give ballast and support.

Then Lloyd explains in English that on the choir’s last biennial trip to Germany, two partner community choirs there had learned music from their recent Syrian immigrants — and taught it to the American visitors. The minute they begin to sing, the Syrian children’s faces swing up from their mothers’ laps or from lolling sideways bored by the music and all the talking in English. This song, sung by these American young adults, is speaking directly to them. It’s a folk song they know so well, coming from the mouths of strangers in a strange land.

I recognize the word “habibi,” loved one, an Arabic word that has been absorbed into Hebrew. Then they sing “Nassam Alaya.” Later, one of the men will read a poem about the silence that lived in his head and heart through the camps and the terror, and he’ll say that finally, this song has filled the deadly silence with music.

The parents let tears run down their cheeks, and the children get up and sway and clap at Hanna Khoury’s encouragement. They mouth the words in Arabic: The air breezed upon us, from the road of the valley / Oh, breeze, for love’s sake, take me home.

Lorene Cary, founder of SafeKidsStories.com, is a lecturer at Penn and author, most recently, of If Sons, Then Heirs. This is one in a series of articles that will run on The Citizen and SafeKidsStories.

Correction: An earlier version of this story misidentified Hanna Khoury. Khoury, a violinist, is a PhD student at Penn.