Home » Environment » We Are Mantua

The Mount Vernon Manor CDC has a great start on the funding needed to complete the project.  But they need your help.  Contact them to learn how you can help their cause.

The "We Are Mantua!" neighborhood transformation plan 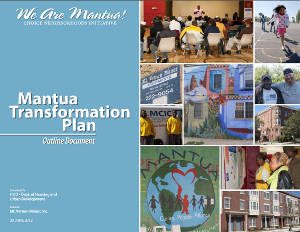 Our Do Something guide for every neighbhorhood

Bring the spirit of the Mantua Greenway Project to your neighborhood.  Cleaning and greening projects of all shapes and sizes can make a big difference in a community.  Check out our Do Something guide to learn what to do in your community. Every morning for years, Bessie Carter Washington stepped out her front door on the 3500 block of Mantua Avenue to a depressing sight across the street: a falling-down chain link fence, and beyond it, dirty Amtrak tracks running all along the northern boundary of her Mantua neighborhood, just north of Drexel University. Beside the fence, grass grew up to her knees; there were no sidewalks or curbs or street lights, which made walking, waiting for the bus, or driving unsafe.

In 2011, Washington decided she’d had enough. She crossed the street to a stretch of litter-strewn dirt on her side of the fence, and began planting flowers and putting in colorful pinwheels, creating a memorial garden for her parents, who had both lived and died in Mantua. “I didn’t want to wait for someone else to come in and beautify our area. I just started,’” she says.

The plants grew tall, creating a green division between the tracks and her rowhome, and the joyful spot attracted the attention of other residents and leaders in Mantua. Her garden became a cherished part of the neighborhood, and it got people thinking: Wouldn’t it be wonderful if we could green and beautify more of this corridor?

Perhaps it is a sign that the area, long known for its blight and poverty, is on its way to benefitting from the city’s renewal of the last decade. Bike paths and tree planting have made city life better for so many; why not for Mantua residents?

Five years later, that is on its way to happening, thanks to a community-wide effort inspired by Washington and led by neighborhood organization Mount Vernon Manor, which was one of 17 sites nationwide to win a $250,000 Choice Neighborhood planning grant from the Department of Housing and Urban Development (HUD) to create a plan that would improve their community.
Along with Mount Vernon, veteran community engagement organizer Donna Griffin led resident task forces in bi-weekly meetings to discuss issues like education, health, and safety, and to lay out some priorities when it came to physical development: improved sidewalks, more street trees, improved bus stops with benches and, thanks to Washington’s example, a better and more attractive buffer between the neighborhood and the railroad tracks.

The result? The We Are Mantua! Transformation Plan, completed in 2013, which included the idea for what they call the “Mantua Greenway”—a well-lit, paved path along Mantua Avenue for walking and biking with trees, plants, benches, and fitness equipment. When completed, the Greenway will run along the northern side of Mantua Avenue from 34th Street to Parrish, to 40th Street, up 40th to Girard and Parkside avenues, eliminating gaps that break the continuity of infrastructure, and linking Mantua by foot and bike to the Art Museum, the Mann Center and the Schuylkill River Trail among others.

The effort harkens back to better times for Mantua. Washington, a lifelong resident of the neighborhood, remembers the mid-20th Century when Mantua Avenue was a well-maintained artery to the zoo and museum district, bustling with shoppers. The neighborhood had more than 200,000 residents; now it has barely 8,300, and as of 2013, its median household income was just over $19,000. In earlier days, Amtrak maintained the brick-lined sidewalks in front of its tracks; then it dug them up, and never replaced them. Soon after, the City repaved from 31st and Spring Garden streets to the corner of 34th Street and Mantua Ave—but no further, like it was a forgotten corner of the city.

Now residents of Mantua are working to change that. Together with Mt Vernon Manor and community development organization LISC, they have worked to raise money for the approximately $5 million project. With the final design still a year away from completion, they have raised close to $500,000 from the city and state; the plan was also a finalist for the Knight Cities Challenge this year.

They have a long way to go, but the Mantua Greenway Resident Advisory Committee is still meeting regularly. In April, they held a series of meetings and events to send a message to the rest of the community that the project is still underway. Residents painted crosswalks and road murals on Mantua Avenue, hung a sign on the chain link fence that says “We Are Mantua.” This summer, they plan to hold two big community cleanup events.

“There’s been a real resident cohesion around this project,” says Griffin. “Residents have taken ownership of this, they’ve been very diligent in keeping Mantua Avenue in as good condition as it can possibly be, taking care of overgrowth, and engaging the city in joint cleanup projects.”

“There’s been a real resident cohesion around this project,” says Griffin. “Residents have taken ownership of this, they’ve been very diligent in keeping Mantua Avenue in as good condition as it can possibly be, taking care of overgrowth, and engaging the city in joint cleanup projects.”

The Greenway will provide residents easy access to some of the neighborhood’s most treasured spots, and could also increase the health and wellness of Mantua, which has a growing senior population and historically low access to green spaces and recreation facilities. It could also draw positive attention to a neighborhood that President Obama named one of his Promise Zones and Drexel President John Fry has made a focus of his civic outreach mandate. Perhaps it is a sign that the area, long known for its blight and poverty, is on its way to benefiting from the city’s renewal of the last decade. Bike paths and tree planting have made city life better for so many; why not for Mantua residents?