Join us for more events

Chrissy Houlahan—Air Force veteran, Stanford-trained engineer, entrepreneur and politician—and Citizen co-founder Larry Platt will discuss her life story, her position on a host of contemporary issues, what she’s found inside the bubble of Washington politics, and her commitment to practical problem-solving. “I think veterans are uniquely qualified right now to bring us together,” she said as a candidate. “I was never asked what party I was part of when I was on active duty.” Register here to get the Zoom link.

In Brave New Home, Philadelphia author, urban thinker and Citizen Board Member Diana Lind offers a radical reimagining of housing in America, starting with an uncomfortable truth: That our country full of single-family homes is bad for us, and for our planet. Instead, Lind lays out alternatives, from multi-generational and co-living to micro apartments and tiny house communities, telling the stories of Americans who are forging their own way to a more affordable, more sustainable and more fulfilling home life. Register here to join us for a conversation with Lind.

Sign up for our newsletter to be the first to know about our upcoming events. 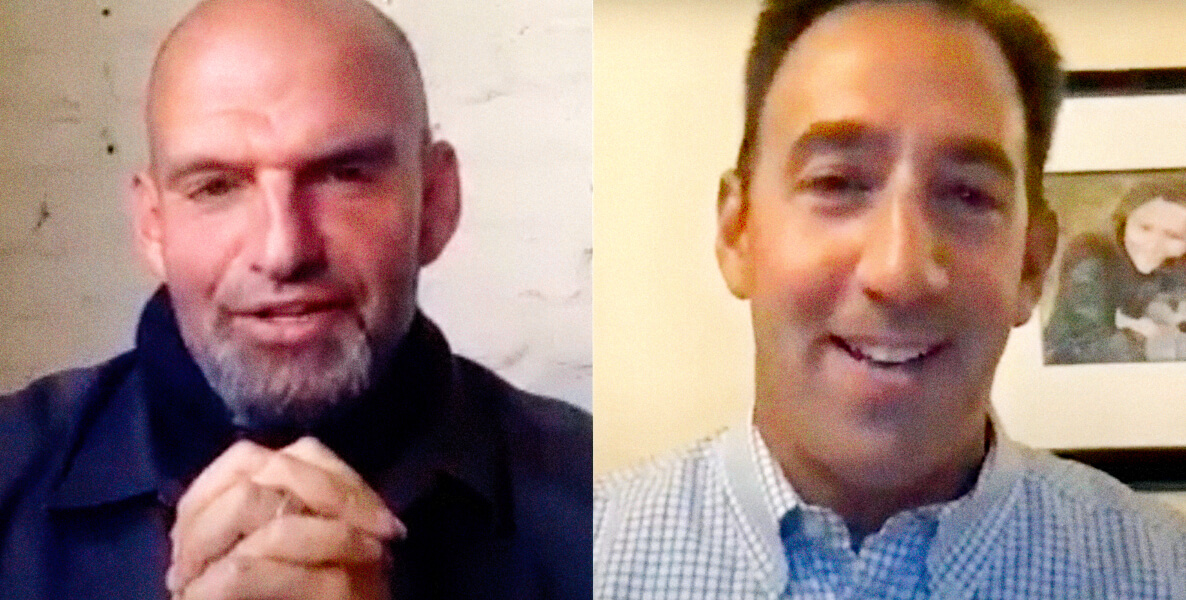 “There’s a cancer in our politics,” said Citizen co-founder Larry Platt Wednesday night, as he kicked off a virtual event featuring Lieutenant Governor John Fetterman and civic-minded entrepreneur and philanthropist Jeff Bartos, his Republican rival in 2018. “And these two guys, in my view, are modeling a way out of it.”

The “cancer” to which Platt was referring: the entirely depressing and ever-worsening divide between political parties in America, and the failure of legislators to reach across the aisle to find common ground in the name of serving their constituents.

Fetterman and Bartos, however, offer a different paradigm.

Back in 2018, when the two were running against each other for the lieutenant governor post, it was Bartos who introduced himself to Fetterman at a campaign event. It’s an act that’s so rare in modern politics that Fetterman at first assumed it was a joke. “To be automatically suspicious that somebody [could be] kind and genuine and just straight-up sincere shows you the sad state of affairs,” Fetterman said.

The two struck up an unlikely texting and phone friendship, recognizing in each other a confidante. “At some point that summer, we just started talking about what are you doing today, where are you, what’s going on? We were able to exchange information and talk to each other about what was going on in a way that we knew we would respect each other’s privacy,” Bartos shared.

Their friendship was solidified on Saturday, October 27, 2018, when Tree of Life Synagogue in Pittsburgh experienced that horrific mass shooting. “Jeff was the first person I called,” Fetterman recalled; he knew how proud Bartos is of his Jewish heritage (his great-grandfather was an Orthodox rabbi), and how involved he is in Jewish philanthropy. To this day, Bartos says, that call remains meaningful. “It’s something I come back to when I get frustrated with how silly the world seems sometimes. I think about that call, and about that bond,” Bartos said.

As the two men made clear to 160 registered guests on Zoom, they share more than a bromance: They believe in each other’s work.

Bartos has been busy since early in the pandemic creating the nonprofit Pennsylvania 30 Day Fund with other PA leaders, a program that gives small business owners in the Commonwealth a forgivable $3,000 loan to help them through these devastating times. The fund already has raised $2.4 million.

Fetterman calls the initiative extraordinary. “That should be scaled and modeled all across the country,” he said. “Democrats, we always get banged for thinking that government is a solution for everything. Well, it’s not the solution; it’s innovative private-sector thinking like what Jeff did… to help these kinds of businesses. They don’t have lobbyists, they just need resources. And that’s what Jeff did, and it’s genius.”

Fetterman, meanwhile, has been working on all aspects of Covid-19 recovery efforts, including revisiting the push to legalize marijuana as a means to generate funds for the state.

“It comes from a true bipartisan place in my heart,” he said. “I don’t consume marijuana, it’s not part of my life. But I agree all adults should have safe, legal access to these substances and to partake, and I know we’ve never been in a place where we’ve needed these [revenue] resources more. You think of what Jeff’s doing on his level, well what if you could direct hundreds of millions of dollars every year to do just that and have that be free money, essentially?”

Both men agreed that, despite what social media and cable news would have you believe, people are more alike than different, more decent than destructive.

“You can feel strongly about an issue, you can agree to disagree,” Fetterman said, “but you can still be friends, you can still have a beer, and you can still work to a better outcome for everybody. And I would never want to lose sight of that.”

If you missed the event, you can watch it above.

And be sure to join us next Wednesday, September 16th, at 6pm for our next virtual event with U.S. Congresswoman Chrissy Houlahan. It’s free, but you must RSVP here.