“We’re now in an odd in-between place where restaurants and theaters and concert venues and hospital systems are starting to impose their own vaccine mandates for staff or patrons one-by-one, even without any direction from city government. That will help as the number of such establishments continues to grow, but at some point, city government needs to come off the sidelines.“

Think Mayor Kenney should follow the likes of New York and and San Francisco and implement vaccine mandates?

As the US and Philadelphia experiences another Covid-19 surge, vaccines are our only hope. To prevent hundreds (possibly thousands) of additional deaths here in our great city, PLEASE make vaccination mandatory for all city workers; please make it a requirement for indoor dining and working out at gyms (as NYC has done). It’s clear that many still need an extra push to get vaccinated—nearly 25% of Philadelphias. That’s nearly 375,000 people at greater risk for hospitalization and death. And, without getting those folks protected, all others are at risk.

Where to get the facts

You can find the latest local vaccination stats here, and new case numbers here. To see what variants are most predominate in Philly, check out the Bushman Lab’s surveillance sequencing.

For more of your burning Covid-19 questions answered, read Dear Pandemic, run by volunteer team of women scientists, many from Philly, to share true and clear information about the pandemic. Recent articles include:

How does natural immunity to SARS-CoV-2 infection differ from immunity generated by COVID-19 vaccines?

What should I make of the “leaked” CDC slides last week? Is Delta worse than we thought?!

What do the new CDC mask guidelines really mean? 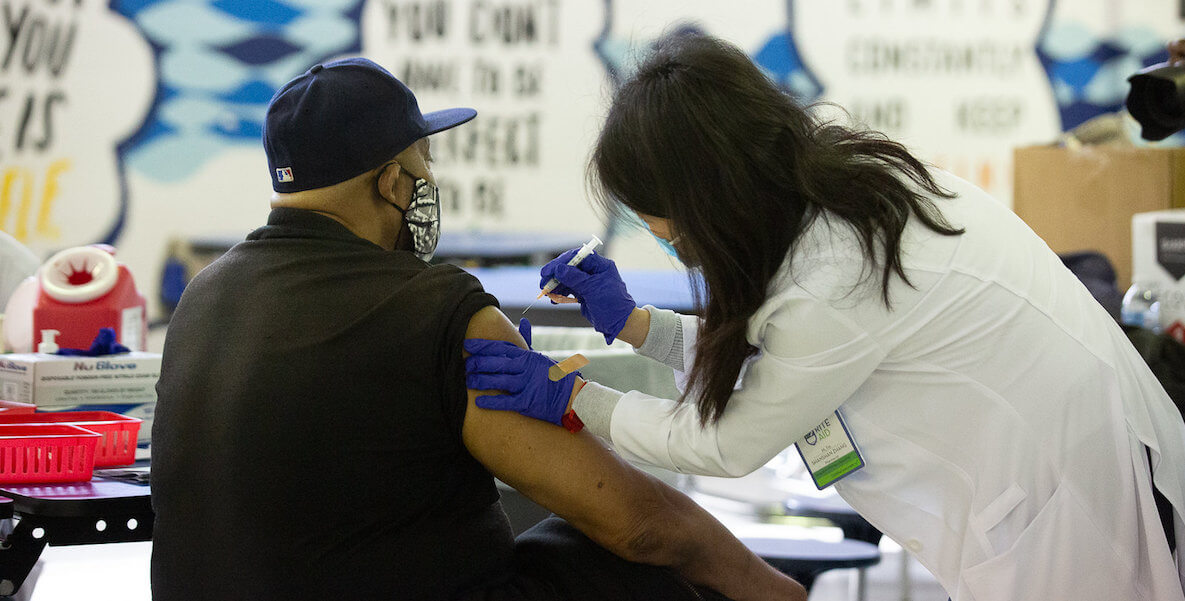 The Covid-19 vaccines have done an incredible job at slashing the rate of hospitalization and fatalities for those who received them, even as cases have been rising due to new variants of the virus.

The cases are rising enough now, mostly among the unvaccinated, but also with smaller numbers of breakthrough cases in vaccinated people, that governments are starting to consider taking some more proactive steps to mitigate it.

In Philadelphia, the Health Department has started hosting Covid press briefings again, and they are recommending—though not mandating— indoor masking, as well as encouraging people to gather outside instead of inside, and avoid crowded indoor spaces.

We should, of course, consider everything that will help stop the spread of the virus, including having both vaccinated and unvaccinated people wear masks indoors. As a vaccinated person, the emphasis on mask mandates for all as a rumored possible next step is pretty grating, though, when it’s clear that more can be done to force more unvaccinated people to get their shots. Masks are effective for mitigation, but we now have a much more effective tool in the vaccine, and that’s where the focus should be.

MORE ON COVID AND THE PUSH FOR MORE VACCINES

Children and immunocompromised people may not have a choice in the matter at this moment, but there are still many people out there who haven’t gotten the vaccine for various other reasons, and it’s this group who would be mostly to blame if we all had to give up some of the increased freedom we’ve been able to enjoy since early summer.

City and state governments in Pennsylvania are far from exhausting all the more coercive strategies at their disposal, and so far have relied almost entirely on policy carrots to convince people to get vaccinated. Elected leaders in New York City, San Francisco, and several other places have begun taking steps to mandate vaccines or proof of negative Covid tests for city workers, teachers, and police, and at some private businesses like restaurants and gyms.

President Biden is even considering withholding federal funding from some institutions who don’t impose vaccination mandates. So far, Philadelphia Mayor Jim Kenney is not yet broaching the possibility of a mandate anywhere, but Philly Mag’s Ernest Owens says it’s time.

Playtime is over. We have the power to stop the spread, so let’s do so now. All colleges, hospitals and universities need to immediately mandate vaccinations for students and employees or enforce testing once a week. Employers need to ask applicants if they’re vaccinated up front and act accordingly to protect their workplaces.

Nonprofits and other service organizations need to enforce “vaccinated-only” events for in-person gatherings to reinforce how serious such measures are to public health and safety. Restaurants, nightclubs, and other recreational spaces need to implement “ No vaccination, no play” policies that ensure such socialization is safer.

And yes, our government, at all levels, needs to support and encourage similar mandates within its departments. And no, none of this violates HIPAA. Nice try, Congresswoman Marjorie Taylor Greene.

Translation: We are going to have to restrict the unvaccinated so that we don’t all have to suffer. All institutional, personal and governmental hands should be on deck in applying pressure to the most stubborn among us. To this end, New York City has just taken the bold step of mandating vaccination proof for indoor dining and workouts.

We’re now in an odd in-between place where restaurants and theaters and concert venues and hospital systems are starting to impose their own vaccine mandates for staff or patrons one-by-one, even without any direction from city government. That will help as the number of such establishments continues to grow, but at some point, city government needs to come off the sidelines.

As a vaccinated person, the emphasis on mask mandates for all as a rumored possible next step is pretty grating, when it’s clear that more can be done to force more unvaccinated people to get their shots.

Police officers come into close contact with so many people day to day, and teachers are about to go back in the classroom at the end of the month, in many cases working with dozens of unvaccinated kids under 12 every day.

It’s a crazy situation and Mayor Kenney has the power to do something about it, but for whatever reason, he’s unwilling to pick this fight yet. Early evidence from New York, where vaccinations have surged 40 percent in the week since Mayor De Blasio’s mandates were announced, suggests that he could dramatically shift the playing field if he acts soon.