Volunteer with your dog

Nellie’s Schoolhouse is always looking for volunteers in both human and canine form. Click here to see their list of requirements and to fill out the signup form.

A visit from one of Nellie's dogs might help 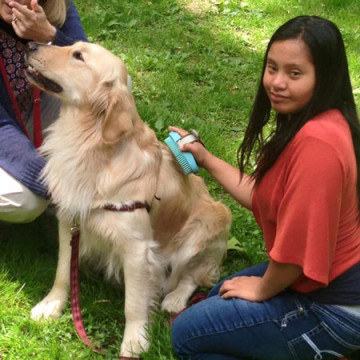 If you think your child could benefit from visits from the dogs of Nellie’s Schoolhouse, first view their recommendations, then click here to sign up. Sessions are $40/visit, with a minimum of 8 visits. Citizen of the Week: The Dogs of Nellie’s Schoolhouse

The therapy dogs of Nellie’s Schoolhouse have helped children cope with autism, depression and anxiety.

Citizen of the Week: The Dogs of Nellie’s Schoolhouse

The therapy dogs of Nellie’s Schoolhouse have helped children cope with autism, depression and anxiety.

Ever since Danny Kogan got new neighbors over a year ago, he’s barely set foot in his Huntington Valley backyard. That’s because the neighbors came with something truly scary to 11-year-old Danny: A Bernese mountain dog.

But now, thanks to golden retriever therapy dogs Gus and Zeke, Danny is reclaiming his yard—and making new (canine) friends at the same time.

Gus and Zeke work with Nellie’s Schoolhouse, a nonprofit based in Wayne, Pa. that aims to help children, often on the autism spectrum, reduce their anxiety and depression. For Danny, who is on the autism spectrum, that has meant slowly getting used to dogs through frequent meetings, so that now he can sit outside with one of the retrievers, who will help him stay calm even if the neighbor’s dog lets out the occasional bark.

Nellie’s Schoolhouse launched 16 months ago, when Executive Director Tom Richards, a former administrator at a West Chester school, decided to combine two of his interests: kids and dogs.

The program now has nine dogs that serve in several schools in and outside Philadelphia, like St. James School in East Falls, the Center for Autism in the Northeast, The Talk Institute in Newtown Square and Downingtown Middle School. Nellie’s Schoolhouse also works with several summer camps, and served nearly 200 children and young adults last summer.

“A child on the spectrum or with anxiety and depression can be hesitant in general about their daily lives,” Richards says. “They can be socially withdrawn and awkward, non-verbal and unable to communicate, struggle with socialization and have difficulty completing small tasks that you and I might find easier to finish.”

Therapy dogs empower these children by providing them self-confidence to take on tasks that may be scary to them.

Richards, who earned certificates in animal therapy, says he started by offering his dogs for free to St. James School, which he knew does not have enough support for students with extra needs. For the first half of the year, the dogs visit a special education classroom of four boys; after the holidays, the dogs will visit another classroom of all girls. During the sessions, Richards or another volunteer teach skills such as how to approach a dog, how to pet a dog, how to meet a dog, and how to groom a dog.

“These dogs become buddies with a tail,” says Lisa Kogan. “For children who have anxiety, and children on the spectrum, they are always trying really hard to prove themselves to people and they have a little harder time trying to make friends because they can get marginalized for having differences. I can’t think of anything more non judgmental than a dog.”

These skills, in turn, help children gain self-confidence and relieve anxiety through their meetings with their canine friends. The therapeutic connection between dogs and children really started to take off in the last five years, when therapy dogs have become more widely used, Richards says, including for veterans and others suffering from PTSD.

“There’s so many ways dogs are being used today,” Richards says. “Therapy dogs, [researchers] are finding that they bring comfort, they bring a sense of independence, it does make kids more confident and helps them with their socialization and communication.”

When Richards is approached by a client, he first meets the child and their family without a dog, to see what the child’s needs are. Then he works with the family to set goals. Sessions are tailored to the child’s concerns—whether fear of animals, lack of self-confidence or dealing with general anxiety.

“I want them to not only feel confident, but know how to approach a dog, know what questions to ask, know how to read body language—all of that happens,” Richards says. “It’s more working with a teacher or a parent and asking, what do we want to get from this situation?”

Individual sessions cost $40 for a 30 to 40 minute visit, and clients must sign on for a minimum of eight visits.

Dogs have strict qualifications for working with kids. In particular, they must have a “go-with-the-flow” temperament because often they will go into situations that are foreign to them, and barking or jumping can unnerve a child, Richards says.

For Danny, who has been working with the dogs since the summer, the visits have become a “total positive reinforcement,” according to his mother Lisa. This is a long time coming, Danny’s mom says. When the dogs of Nellie’s Schoolhouse first began coming to the Kogan household, he hid under his covers as soon as he knew a dog was coming in the house.

At the next session, the goal was to get Danny to the top of the stairs to look at the dog. The following session, he got three-quarters of the way down the stairs, and so on. Now he is petting and walking the dogs and feeling comfortable in his own backyard.

“Essentially, these dogs become buddies with a tail,” Lisa says. “For children who have anxiety, and children on the spectrum, they are always trying really hard to prove themselves to people and they have a little harder time trying to make friends because they can get marginalized for having differences. I can’t think of anything more non judgmental than a dog. Really, it’s not a joke they are ‘man’s best friend’ because they’re a non judgmental peer, they just happen to have a tail.”