You can have a say in the future of Councilmanic prerogative, the informal and antiquated legislative tradition that gives too much power over districts to city Councilmembers. Tell them you want to see an end to it.

Here are some tips:

Articles from The Fix

The Fix
Introducing a new series, in which we delve into the city’s transactional culture of influence—and look at strategies for promoting public integrity
The Fix: When The Empire Strikes Back
An attack on Controller Rebecca Rhynhart by the Mayor’s allies is straight from a familiar Philly playbook
The Fix: Councilmanic Prerogative at its Worst
Councilmember Cindy Bass wants to ban new day cares from her district. As Philly 3.0’s engagement director notes, it’s a shameful example of how politics works here
The Fix: “Integrity Idol”
Nationwide contests in developing countries turn honest public officials into celebrities. Let’s convince the DC-based group behind the project to bring it here The Fix: Shifting the Blame

In the wake of a land sale scandal, Councilman Kenyatta Johnson has tried to take attention off himself. As Philly 3.0’s engagement director notes, that’s part of the problem

The Fix: Shifting the Blame

In the wake of a land sale scandal, Councilman Kenyatta Johnson has tried to take attention off himself. As Philly 3.0’s engagement director notes, that’s part of the problem

After getting caught twice steering city-owned land to the same friend and campaign contributor, and taking serious fire from the media—and possibly the FBI—Councilman Kenyatta Johnson’s office finally issued a statement making the case for blaming everybody but himself.

“There has been a lot of talk about the sale of City-owned property lately. Much of it has been careless and inaccurate. It’s time to set the record straight.

Although it’s convenient and simple to lay the dysfunction of City-owned property sales at my feet, it’s not accurate. Council members do not collect expressions of interest or assess the qualifications of developers. They do not set sale prices. And they do not formulate deed restrictions or enforce those restrictions when buyers do wrong.

As a matter of law and common sense, those duties lie with the city’s land-holding agencies—the Department of Public Property, the Redevelopment Authority, and the Land Bank—with advice from the Vacant Property Review Committee (VPRC). All of those agencies have staffs and boards that bear primary responsibility for sales of City property.

As a district council member, my role is to ensure that the views of the residents of the Second District are heard in the process. Without input from district council members, developers—who frequently do not live in the communities where they purchase property—would be left to build whatever they want, without any concern for the people who live in those communities.”

While it’s true that multiple City agencies and authorities are involved in the disposition of city land, it is not the case, as Johnson suggests, that this is mainly an administrative decision, with Council members weighing in late in the game.

As this chart from the Land Bank shows, Council weighs in early in the process, before a given property advances to the agencies Johnson mentions. There’s only an initial review from the city staff before Council is consulted to see if it has the support to move forward. 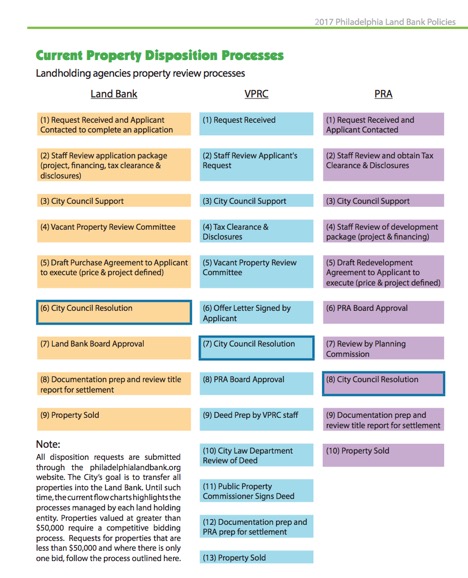 The real issue is that Councilman Johnson always prefers a discretionary process where he gets to be the dealmaker on every single project, letting him reward friends and freeze out disfavored people.

So for Felton Hayman’s applications to progress as far as they did, they would have to have been green-lighted by Councilman Johnson at the very beginning of the process. With the Vacant Property Review Committee reporting only one expression of interest to the Philadelphia Redevelopment Authority when there really were 16—a move that conveniently avoided the competitive bidding process and allowed Johnson to steer the properties to his buddy—it just isn’t believable that Johnson wasn’t aware of the other 16 applications first. He would have been among the first to be consulted about them. Paul Chrystie at the City says as much in William Bender’s report on this.

What we really need going forward is a rule requiring expression of interest letters to become public information right away, available for anyone to see online well in advance of any Council vote to sell.

How the initial decision is made to put land parcels up for auction in the first place is a mystery, and it seems to depend only on a Councilmember’s interest in doing so. If expression of interest letters were all made public, we could see where citizens have tried to acquire land but may have been rebuffed or ignored by elected officials.

Councilman Johnson’s last point in the quoted section above also deserves some pushback. The statement that developers would be “left to build whatever they want” without Johnson’s direct involvement is just incorrect. Philadelphia has a zoning code that determines what can be built. While people are still free to apply for variances from what the code says, it’s still the case that right now there are baseline rules in place governing what can and can’t be built.

Does Councilman Johnson think the zoning rules now in place for the remaining vacant lots in the 2nd District are any good? If not, he has essentially unilateral power to change them to his liking. The real issue is that the Councilman always prefers a discretionary process where he gets to be the dealmaker on every single project, letting him reward friends and freeze out disfavored people.