Watch the Mummers ... and become one yourself!

The parade starts at 9am at City Hall, goes to Washington Avenue, and ends … when it ends.

In between, there are two Fancy Division competitions at the PA Convention Center.  parade route, and view more details (including tickets to the main stage) here.

Watch Behind the Sequins: Showtime for the Philadelphia Mummers, a series of six short videos that tell the Mummers’ story through the people who make the costumes, choreograph the routines, build the sets, and prepare for the annual Philadelphia Mummers Parade on New Year’s Day as they have for generations. 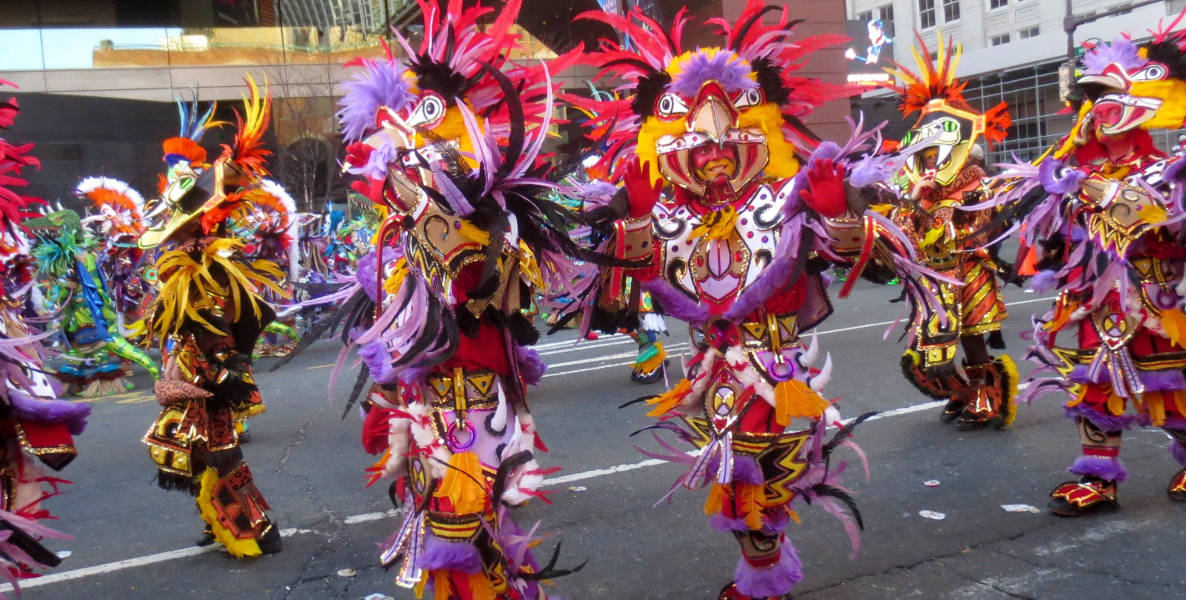 The Citizen Recommends: The Mummers

The Citizen Recommends: The Mummers

The first time I went to the Mummers New Years Day parade, I was 24 and had lived in Philadelphia for just less than a year. I went because that’s what I was taught you do when you live in a city — you hear there is something happening in the street; you go and see what it is.

Going to see what is happening in the street was a value instilled in me as a child citizen of New York City. The Gay Pride parade processed up Fifth Avenue, just a few blocks away from our apartment. In nearly the same spot most weekends in the spring and summer, there were street fairs. They always offered the same wares — papaya drinks, funnel cake, brightly woven bags, costume jewelry — but still, we went. Those papaya drinks are delicious; it was nice to be out in the sun holding my mom’s hand and looking at people.

Twice a year they closed our street to traffic and the Irish bar downstairs transformed the sidewalk into a party spot where old men played stickball and got hammered. It was loud — there were bagpipes, and the drunker the men got, the more they buzzed our buzzer. There was something happening. My sister and I took the elevator down and went to see what it was. In between innings, the men let us take a few swings. The woman who we only ever saw going into or coming out of that bar was on the street now, holding the leash of her little dog, watching as an old man ran the makeshift bases.

In our houses, we are alone and singular and we know what will happen. In the street, we are Philadelphians, and we don’t. This is one of the things only a city allows, if not its central joy—proximity to other people in a way that can lead to surprise, spontaneity, even injury or pain, but always, experience.

There can be no preparing an uninitiated for the Mummers, and I was no exception. That first year I just let it wash over me — the sequins and the feathers, the numbers of bodies marching in time and the number of banjos being strummed, the costumes — sunflowers, lions, airplanes — and the backdrops like the set pieces of a Broadway musical, the stands full of yelling women in baseball caps who defended their front standing row seats by throwing elbows and their boyfriends who watched the show with open mouths.

At the corner of Broad and South, I met a man with a Santa Claus beard, and a matching vest and hat that were covered in coins. “My vest weighs 10 pounds and my hat weighs six,” he said. His shoes, too, had coins glued to them, but he didn’t know their weight. Someone turned their back to me so they could pee onto the glass window of a 7-11, someone threw a beach ball above the crowd, someone kissed someone else for a long time as the people shoulder to shoulder with the smoochers turned their heads to smile or disapprove.

After the last of the parade passed, people streamed south and east towards “2\Two Street” — the epicenter of the party that would rage all night long; some mummers had peeled off or were moving now with the crowd. Men in sequined spandex, who in their regular life were perhaps electricians or truckers posed proudly for pictures with puffy-parka-ed children and gauged-eared girls as if they were celebrities. There was a sense that all bets were off, anything might happen, the rules that governed what men are supposed to wear or women supposed to say or old people supposed to do or cities supposed to look like seemed today not to apply.

I was hooked. What was this parade, which had all the ingredients to become a nationwide phenomenon like Mardi Gras, but that no one outside of Philadelphia seemed to know about? I took the El home confused; outside the narrow zones of City Hall and South Philadelphia, the city seemed unchanged.

Men in sequined spandex, who in their regular life were perhaps electricians or truckers posed proudly for pictures with puffy-parka-ed children and gauged-eared girls as if they were celebrities. There was a sense that all bets were off, anything might happen, the rules that governed what men are supposed to wear or women supposed to say or old people supposed to do or cities supposed to look like seemed today not to apply.

Something was happening on the street, and I wanted to know what it meant. Now I know that the Mummers parade means many things to many Philadelphians. To those who grew up watching it, live or on television, it is simply what New Years looks like in Philadelphia, a tradition that has always been and will always be, like Uncle Dan visiting for Christmas. To those who suit up, the Mummers and their families, it is the public display of a private way of life — Mummer clubs are composed of interconnected family and friend groups for whom the process of preparing for the Mummer performances creates a vibrant and supportive social and creative community all year long. And for many, Philadelphians of color and anti-racist allies among them, the Mummers Parade is a spectacle of boisterous drunk white men with backwards politics which one is wise to avoid. Still other Philadelphians are oblivious or decline to attend for reasons (“it’s so loud,” “it’s so trashy,” “it’s so dated,”) that can feel like veiled classism.

But none of these Philadelphians dispute that the Mummers parade seems to be in declining health. Mummers of yore recall when the sidewalks all along the old expansive route were nine or 10 people deep. Now Mummers call some sections of the shortened routes “The Valley of Loneliness” where there are more cops than spectators, and the size of the parade itself is down significantly even since the turn of the 21st century, from around 12,000 to 8,000 marchers.

“We want it around for another 114 years, and you won’t do that by just doing the same thing and expecting things to change,” former president of the Fancy Brigade division Jim Julia told the South Philly Review. “The worst thing that you can do is get so steeped in tradition that you don’t see it’s failing.”

Some things do stay the same, others change. The parade’s historical ties to racism have not been stomped out; last year one Wench brigade made light of the Black Lives Matter movement by holding a sign that read “Wench Lives Matter.” This year is the debut of a new Philadelphia Division, which will feature three brand new troupes—Los Bomberos De la Calle (a Puerto Rican Bomba and Plena music group), the San Mateo Carnaveleros (a Mexican-American dance and performance group) and Second 2 None (a drill team based in West Philadelphia) and provide a real home for a more familiar one—the Miss Fancy Drag Brigade.

Members of The Vaudevillians, a nine year-old troupe headquartered at 1026 art space and whose descriptor is “does not tolerate hate . ..revels in parade utopia” say they are planning to come out early before their start time and see the performances from the new division, despite not a little bit of scoffing at the whole Mummers affair from their non-Mummer peers. One member, a music teacher, has brought his two elementary-school aged daughters into the festivities. “Are you a mummer?” I ask the elder. “Yes!” she yells enthusiastically, before going back to the sewing machine to assist women in their 20s and 30s who are hard at work sewing mummer suits out of bright spandex.

Across town at The South Philly Vikings clubhouse — a well-established fancy brigade that has taken home the judges’ first prize many times — the 13- year-old granddaughter of the troupe’s founder is says she is both nervous and proud to be mummering for the first time. She’s told all her classmates at the Girard Academic Music Program (GAMP) to attend the parade so they can watch her moves.

Some plan to come out to this year’s parade for other reasons than Mummering. A planned Justice Rally at the Mummers Parade has a projected 150 attendees. “Let’s represent for the issues that matter to our communities,” reads the Facebook page for the event. Organizers hope to draw attention to issues ranging from the under-funding of our schools to the over-policing of our communities of color, as well as for implementing a $15 living wage, and stopping the routing of oil trains through Philadelphia.

The rally’s page has become a hot spot for conflicted discourse about the meaning of the parade itself.

“Why cant youse choose another day why start the year off with bullshit?! We want to enjoy the new year’s parade. Not listen to shit that has nothing to with us!!” wrote a Jade Alexis.

“A protest could literally only improve this event,” wrote Olivia Curran Webster. “It’s freedom of speech and my right as an American.”

“Everyone calm down,” wrote Adam Leeds. “This is NOT an anti-Mummers protest. It’s a protest near TV cameras that are covering the Mummers parade. For really good causes. No reason everyone can’t get along.”

It’s a simple act—to say what you think about what’s happening in the place where you live, or to leave the closed rooms of your house and step out into the open air—but it carries a profound meaning. In our houses, we are alone and singular and we know what will happen. In the street, we are Philadelphians, and we don’t. This is one of the things only a city allows, if not its central joy—proximity to other people in a way that can lead to surprise, spontaneity, even injury or pain, but always, experience. To be a citizen of a city means, perhaps, to participate in the conversations happening about “the issues that matter to our communities,” regardless of your position or preferred stance—supporter, critic, performer, protester, vendor. Perhaps it just means to show up if you are able.