Screenings last about 40 minutes, and are looped three times nightly at 7 pm, 8 pm, and 9 pm. It is recommended that you arrive 15 minutes before a screening begins.

Bailing Out Moms
More than 80 percent of women in Philly jails are awaiting trial. Help the People’s Paper Co-op pay their bail in time for Mother’s Day — then, welcome them home
Michael Rubin’s $50 Million Big Bet
The entrepreneur and Meek Mill BFF doesn't do anything half-assed. The parole and probation system might not know what hit it
Guest Commentary: Abolish Prisons
A lawyer and advocate calls for ending our expensive culture of incarceration—and instead spending money to help prevent many crimes in the first place

More than just a haunted house, Eastern State Penitentiary offers a number of programs and events all year with the goal of educating Philadelphians about the criminal justice system in this city and across the country. 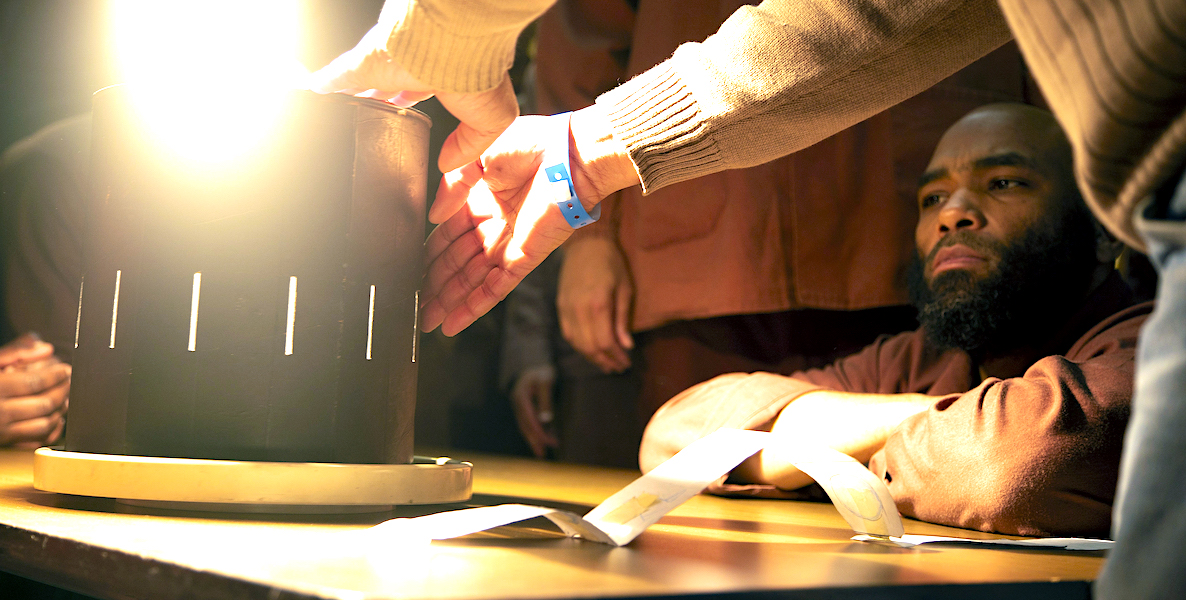 A series of films created by incarcerated men and women in Philly has a common thread: Humanity. See them at Eastern State Penitentiary this month

A series of films created by incarcerated men and women in Philly has a common thread: Humanity. See them at Eastern State Penitentiary this month

As the collect call recording plays, a black screen suddenly cuts to a photo of a young man proudly holding a beautiful baby boy in his arms.

The next shot: that same man, Braheem, wearing a state-issued maroon prison uniform, his arms around two grown boys—one of whom had been that baby.

In just under two minutes, Braheem delivers a profound commentary on the toll of incarceration on families and communities.

Braheem’s sons grew up while their father was in prison at Pennsylvania State Correctional Institution at Chester (S.C.I.); that experience is the subject of “My Boys,” a 108-second film Braheem created through Hidden Lives Illuminated, a program that, since last September, has helped currently incarcerated men at Pennsylvania State Correctional Institution at Chester and women at Riverside Correctional Facility for Women produce short animated films using stop-motion, cell animation, and rotoscoping techniques. Funding for the program came from The Pew Center for Arts & Heritage.

The film series is part of Eastern State’s mission to be known for more than just its famous Halloween haunted house, and really be a leader when it comes to criminal justice reform. “The United States has the highest rate of incarceration in the world, by far, and yet we have no National Prison Museum,” says Sean Kelley, ESP’s Senior Vice President, Director of Interpretation. ESP is attempting to fill that void.

Hidden Lives Illuminated is ESP’s fourth criminal justice project after The Big Graph, Prisons Today—which has won numerous awards—and the Returning Citizens Tour Guide Project, which has previously incarcerated individuals giving tours. Outside the prison, the Big Graph, a 16-foot tall, 3,500 pound steel sculpture, illustrates the increase in American incarceration, to 2.2 million people now; the racial breakdown of those incarcerated; and how we compare to other countries in the world. The monthly Searchlight Series brings speakers to the prison to address issues of criminal justice in America including, this week, Mothers In Charge founder Dorothy Johnson-Speight and Philadelphia chief Public Defender Keir Bradford-Grey; the next one, on September 3rd, will feature District Attorney Larry Krasner, talking about his efforts to reduce court supervision.

Braheem’s film uses stop-motion to showcase more than 100 photos of his sons over the years he missed: birthdays, graduations, vacations. Gorgeous babies turn into adorable little boys, then handsome young men. The sons’ voices are woven throughout, as if they’re talking via collect call: “My name is Braheem Junior, I’m the son of Braheem,” says one boy; “My name is Malik,” says the other. They go back-and-forth thereafter: “My dad has been locked up since I was five months. I had no idea how my life would be shaped by not having my dad around me. My dad wasn’t there to witness my first steps, my first haircut…” And so on.

“So many people in here, we have a choice. We all said ‘We don’t have a choice, we grew up in a bad neighborhood.’ My neighborhood had schools, and my family wasn’t in the point to where we were living on the streets. So I had a choice,” Clarence says.

In just under two minutes, Braheem delivers a profound commentary on the toll of incarceration on families and communities. He ends on this note:

“I love them both very much. I’m proud of the black men they have become in my absence. They make me proud to be their father. I’m sorry for the times I couldn’t be there for them. Prison bars can’t change the love I have for my sons.”

Marvin, another incarcerated man at S.C.I., made his film using 1,000 of his own drawings; it is centered on his life spent between basketball courts and judicial ones. A former college basketball player who’d been troubled by a gambling addiction, he spent two months on the run before his arrest. His piece delves into the shame he caused his family, the remorse he now feels, his growth from being self-centered to thinking about others. “I never told them I was sorry. I never told them that I understand the pain I put you through. And in my video, that’s what I’m saying,” he says. The filmmaking process inspired him to apologize to his mother, and to write a letter to his victims, via the courts, which they may choose to read or can decline.

Clarence’s film is heart-wrenching. A tribute to his late niece, Kimora, who died at age 10 of leukemia, it presents a series of photos and drawings—a small hand inside a larger one; a mouth silenced, then free.

Sitting in the high-ceilinged chapel of S.C.I. one recent summer afternoon, Clarence says that Kimora opened his eyes to the idea of choice.

“She had no choice—it was chance,” he says of her leukemia diagnosis. “And so many people in here, we have a choice. We all said ‘We don’t have a choice, we grew up in a bad neighborhood.’ [But] my neighborhood had schools, and my family wasn’t in the point to where we were living on the streets. So I had a choice. And if she can live for eight years knowing she’s going to pass, how could I cry about anything or complain about anything?”

Much of the beauty in the Hidden Lives Illuminated films lies in the filmmakers’ success at shattering misconceptions: There’s an unexpected vulnerability and intimacy in all of them.

Clarence is so youthful looking, it’s hard to believe he’s been incarcerated for 14 years already—S.C.I. opened only 21 years ago—and he says his niece has inspired him to want to make the right choices. In prison, he learned to read—a skill he’d never had and for which he never knew how to ask for help. “I don’t know how to show emotions because some of the places I’ve been, emotions are weakness,” he says. In prison, he’s earned a certificate in mental health, and he’s training to be a barber—he dreams of someday starting a nonprofit that would allow him to cut children’s hair for free, and provide them with clothing and sneakers; he also hopes to speak to kids about the importance of taking advantage of the opportunities he didn’t—Boys and Girls Clubs, basketball, after-school activities.  And he wants to visit children with leukemia in hospitals, to let them know how much meaning their lives have, the impact they have on others.

In total, there are 20 thoughtful, thought-provoking films in the series, which have been grouped into four different categories—View From Inside; Criminal Justice Today; Family and Community Impact; Restorative Justice. Each week at Eastern State, the screenings will be devoted to one of these four different themes; additional programming will include opportunities to write letters to the filmmakers, talks from the teaching artists, and more . And whatever the content of the films, there is a universal thread that runs through all of them: humanity.

“I think what people would be surprised by is the intelligence and the humanity of these people who are incarcerated,” says William Wallace III, one of the teaching artists who led the program, along with Erika Tsuchiya-Bergere. Much of the beauty in the Hidden Lives Illuminated films lies in the filmmakers’ success at shattering misconceptions: There’s an unexpected vulnerability and intimacy in all of them.

Arts programs in prisons are not a new idea. Hidden Lives Illuminated found its inspiration in 96 Acres Project , a 2012 initiative led by artist Maria Gaspar that explored issues around Cooke County Jail in Chicago. Actor Tim Robbins is well-known for spearheading The Actor’s Gang Prison Project, which since 2006 has been bringing performance opportunities into correctional facilities. And Philadelphia Mural Arts Program’s restorative justice program has been tapping those affected by incarceration to create works of art together for almost 11 years.

As the men watch their films from the chapel one afternoon, some look bashful, some look proud; nearly all of them look humbled, and hopeful. To hear Wallace, the co-teacher, speak about the process of working with his students over the last year is to get a glimpse into the intensity of the work they’ve done here—and the work it takes to re-think our criminal justice system.